Become a Member
Read Today's E-edition
Share This
Burgums hopeful for Office of Recovery Reinvented, but its fate up to future governors
0 Comments
Share this
1 of 2 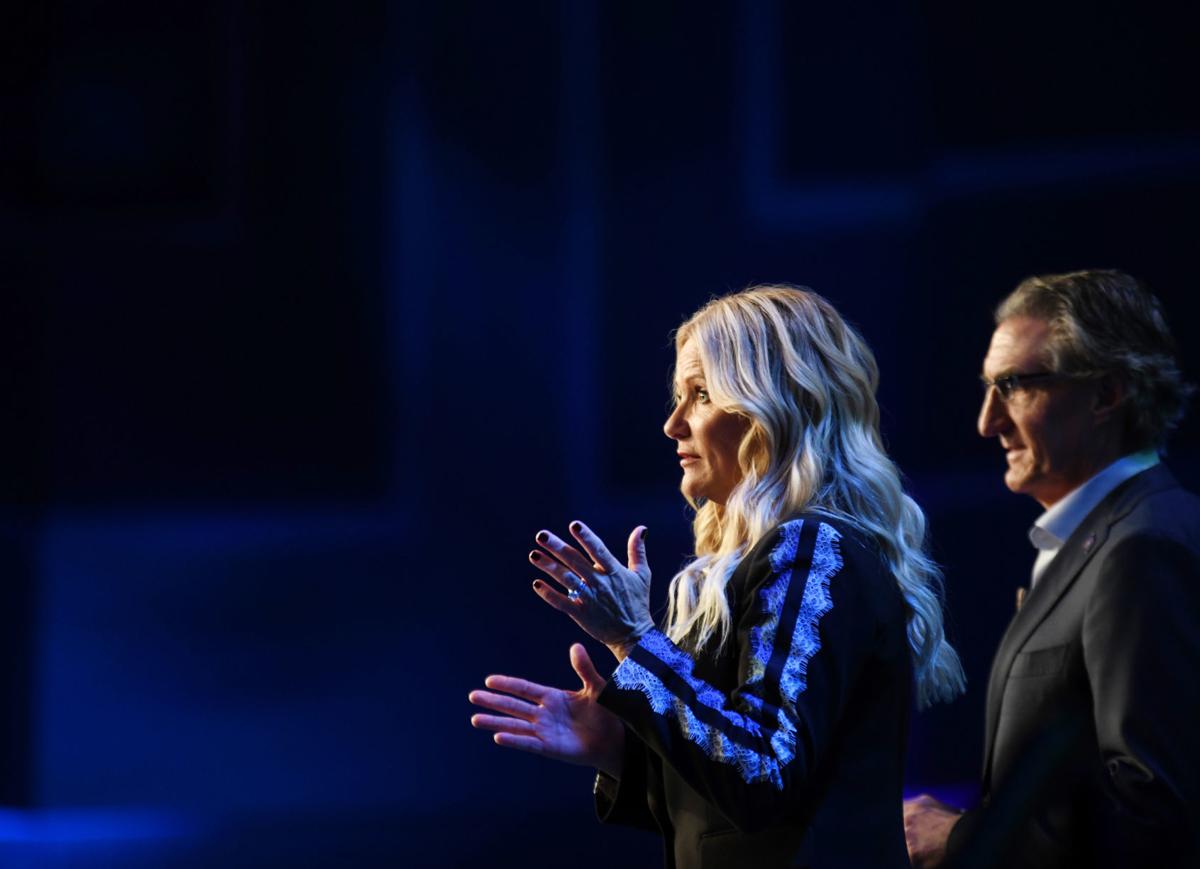 North Dakota first lady Kathryn Burgum and Gov. Doug Burgum are champions for the recently created Office of Recovery Reinvented. The office is guided by a seven-person advisory council chaired by the first lady, who has advocated recovery from addiction in sharing her personal story as a recovering alcoholic. 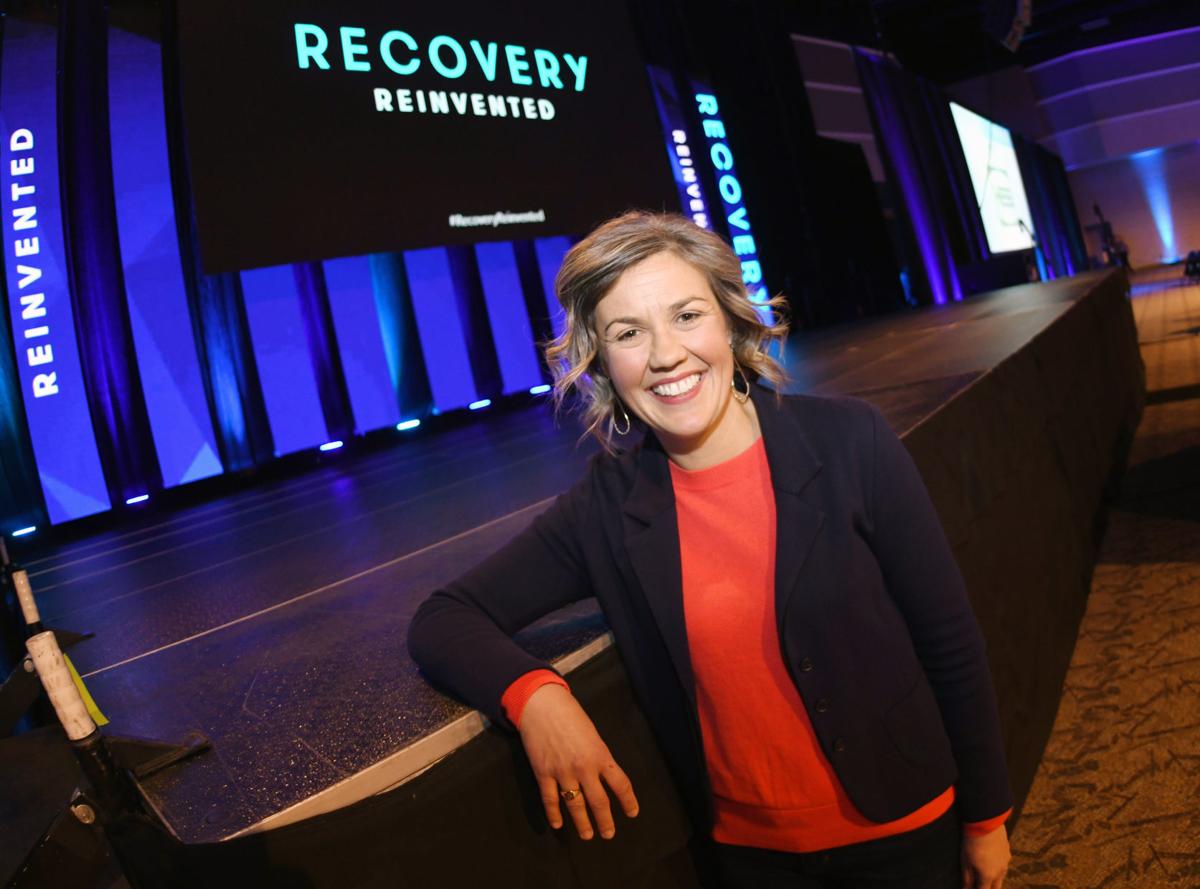 Jenny Olson, managing director and sole employee of the Office of Recovery Reinvented, works remotely from Fargo. The office is funded by private donations.

Supporters of the fledgling Office of Recovery Reinvented say the initiative is making progress on beating addiction. But the office's future isn't certain when Gov. Doug Burgum's tenure eventually ends.

Burgum by executive order in January 2018 created the Office of Recovery Reinvented to "promote strategic and innovative efforts to eliminate the shame and stigma associated with the disease of addiction." The office is not an official state agency and receives no state funding, but it is related to first lady Kathryn Burgum's cause of recovery from addiction.

The office has one employee and is guided by a seven-person advisory council chaired by the first lady, who has championed recovery from addiction in sharing her personal story as a recovering alcoholic.

The office is funded by donations, mostly from the Dakota Medical Foundation, a Fargo-based health initiative that facilitates donations to nonprofits and charities, among other fundraising and training activities. Gov. Burgum, who is seeking reelection in 2020, also donated about $51,500 of his salary to the office in 2018. He pledged as a 2016 candidate to decline his governor's salary to help cut spending.

Those who work with the office say it plays an important role in addressing addiction. But language of the executive order that established it leaves its ultimate fate to future North Dakota governors, who are not bound to continue the initiative.

“There’ll become a time when this stigma will fade away, and when it does then the health care system will start supporting this the way we do other diseases, but we’re not there yet," Gov. Burgum said. "So we have to keep working at that; so I think there’s a role for the Office of Recovery Reinvented trying to reduce the shame and stigma of the disease until it’s gone."

Jenny Olson, who lives in Fargo and works remotely, is the managing director and sole employee of the office.

She said most people might think of the Recovery Reinvented event as the "primary function" of her office, but it's "one component." Recovery Reinvented is an annual, daylong event of addiction recovery speakers and awards led by the first lady and funded by the state Department of Human Services' Behavioral Health Division.

"The high level I'm thinking about every day is how do we drive community engagement that is really going to generate discussion, create effective outreach that increases how many people we can reach, build the awareness, educate around addiction, recovery, eliminating stigma, and then how can we share resources and connect people across the state to empower all of them to do what they do best in their communities," Olson said.

She gave examples of the office's work throughout the year, including:

The office will work on other initiatives this coming year, such as its Families Strong program and advocating "recovery-friendly" workplaces.

"We get a lot of people reaching out, wanting to learn about what's happening in North Dakota, as well as us reaching out to the federal stakeholders and the national platform to kind of influence what is happening relative to addiction and recovery," Olson said.

Though she is the only employee of the office, she pointed to her teamwork with the Behavioral Health Division, as well as "hundreds of volunteers" and support from the Burgums.

"None of this would be possible without great partnerships," said Olson, who previously worked for Microsoft, for which Burgum was an executive from 2001-07. Olson is one of several Microsoft veterans Burgum has appointed to state government positions.

State Office of Management and Budget Director Joe Morrissette called the Office of Recovery Reinvented "fairly unique" in its creation and funding source.

The Office of Recovery Reinvented received about $157,700 in donations from January 2018 to June 2019, according to OMB figures. More than $106,000 of those donations were from the Dakota Medical Foundation, money which Executive Director Pat Traynor said has come from individuals and the foundation.

"Our mission is to improve health and access to care and, as you know, addiction is a disease and it needs an all-out movement of people launching projects and programs to reinvent the whole approach that we take towards addiction," Traynor said.

"That's what we see the governor and first lady doing, is bringing out the best in our neighbors to help folks that are struggling with addiction," he added. "That's kind of the platforms that we like to help folks with."

The office had about $141,400 in expenses in its first year and a half. Olson's annual salary is $96,000, and she receives state health insurance. She is classified as temporary staff.

So far in the 2019-21 budget cycle, the Office of Recovery Reinvented has received $70,200 from the Dakota Medical Foundation.

The 2019 Legislature didn't budget any money for the office but authorized a line item that "any additional income from federal or other funds which may become available to the governor's office" may be used but in accordance with a specific purpose. Burgum's office must report that money's source, amount and purpose to a committee of state lawmakers.

The first lady and Olson each said the "generous" donations have been sufficient to fulfill the mission of the office. Olson said she's looked into grant funding as the office "is gaining momentum."

"We will look for support and partnerships wherever it makes sense, and I think that will continue to evolve," she said.

Sen. Judy Lee, R-West Fargo, who has chaired health and human service committees of the Legislature, commended the private support for the office, which she sees as a tool for public engagement on addiction.

"I think we just need everybody holding hands and doing everything that we possibly can," Lee said.

Burgum's executive order doesn't appear to specify a duration for the Office of Recovery Reinvented, according to Legislative Council Director John Bjornson, the Legislature's top attorney.

"A subsequent governor could continue to follow the order, rescind the order, or simply let it stay in effect but not follow it by not appointing a council and not funding the initiative," Bjornson said.

The Burgums and Olson hope future governors continue the office.

"The goal is simply to fulfill a need -- improve people's lives -- and as long as we're doing that, I fully believe this movement will continue," Olson said.

Kathryn Burgum said the work of almost every state agency is impacted somehow by addiction, but there are no specific budget items "to really evaluate the true cost."

"So until that happens, until we really understand this like we do any other disease, I would think every future governor would think it would be important to really focus on this, really, health care crisis," the first lady said.

The office last year conducted a survey that indicates one in three people in North Dakota still don't believe addiction is a disease. Kathryn Burgum has said the survey provides a baseline to measure progress in the future.

Lee, first elected in 1994, said programs that show results and promise of more are "going to be looked at well."

"When it's fulfilling a valid need and addresses a good purpose, I would expect that the next governor would continue it," she said. "But that's his privilege or her privilege to do."

3rd annual Recovery Reinvented to focus on stigma in the workplace

The third annual Recovery Reinvented event in Bismarck on Tuesday will focus on stigma in the workplace.

For the third time, Gov. Doug Burgum has declined to take a salary, but a House budget panel is giving him one anyway.

North Dakota logged a recent record 118 drug-related deaths in 2020 amid the coronavirus pandemic, when the U.S. also saw a record 93,000 overdose deaths.

North Dakota first lady Kathryn Burgum and Gov. Doug Burgum are champions for the recently created Office of Recovery Reinvented. The office is guided by a seven-person advisory council chaired by the first lady, who has advocated recovery from addiction in sharing her personal story as a recovering alcoholic.

Jenny Olson, managing director and sole employee of the Office of Recovery Reinvented, works remotely from Fargo. The office is funded by private donations.