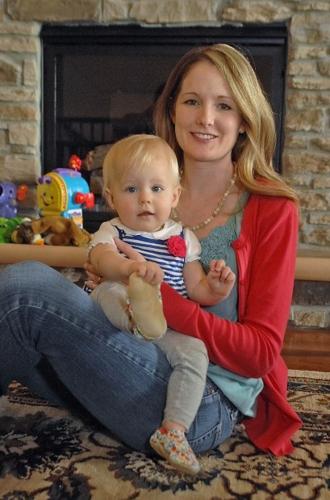 Kya Hager takes a few unsteady steps toward visitors at her home north of Mandan before returning to her hands and knees, her preferred mode of transportation. The 13-month-old smiles and laughs and learns about her world, all within the watchful eyes of her mother, Erica Hager.

"Motherhood is nothing you can prepare for, because it's unlike anything you've ever experienced," Hager said, watching her daughter toddle in their living room.

Every year in North Dakota, more than 8,000 women become mothers to new babies. In 2009, the most recent year for which the state Health Department has released statistics, 8,974 babies were born to women ranging in age from 14 to 55.

Hager is one of thousands of North Dakota women who will be honored by their families for Mother's Day today. As of Friday, Hager had no definite plans on how she would spend the day, other than hanging out with her husband and daughter.

The National Center for Health Statistics says 61.6 percent of North Dakota mothers who gave birth in 2008 were between 20 and 29 years old, with 30 to 39 years old the next most likely group, with 29.2 percent. According to a 2002 study, called the Pregnancy Risk Assessment Monitoring System, the average age of a mother in North Dakota that year was 27.

The PRAMS study showed that 91.2 percent of mothers to 2002 babies were high school graduates, with 64.6 percent having at least some college education.

Hager grew up in California, then went to the University of Mary, where she graduated with a bachelor's degree in business communications with a minor in public relations and a master's degree in management. She worked at U-Mary until Kya was born.

"My priority shifted to being a mom," she said.

The majority of North Dakota moms are employed or are in school. Hager is no exception. She started out intending to be a freelance graphic designer once Kya was born, which she still does on occasion.

However, Hager found a new calling when she put her quilting skills to use making booties for her daughter. The soft little shoes have elastic around the back, are lined with soft, faux sherpa and have faux suede bottoms. After giving some of the "Bison Booties" to friends as gifts, she began selling them online and in a few stores.

Hager has shipped the booties across the country and to places like the Phillipines, France and Canada. The at-home job gives her plenty of time to watch Kya see the world for the first time with her wide, blue eyes.

"We were showing her grass and dirt and bugs," Hager said.

Though it's "not what I had thought I would ever be doing," Hager enjoys that she can do her work with Kya. The business also has given her the chance to get to know other mothers. Hager advises new moms to connect with other moms to learn about the best products, how to get a baby to sleep through the night and other knowledge.

"Everything you would want to know, you can find from other moms," she said.

Remains of 2 missing people found; search continues for 2 others

Authorities have recovered the remains of two people who were reported missing in the region in separate cases, with no foul play suspected in…

A storm system heading for the Plains promises to blanket North Dakota with cold air late this week, and some areas might even see a mid-May s…

Severe weather is possible in North Dakota through Thursday, though the biggest potential for problems is in the eastern part of the state.

Another highly transmissible version of the coronavirus that's been spreading around the country has surfaced in North Dakota.

Dozens of people gathered at the state Capitol in Bismarck over the weekend to join others around the country rallying for abortion rights.