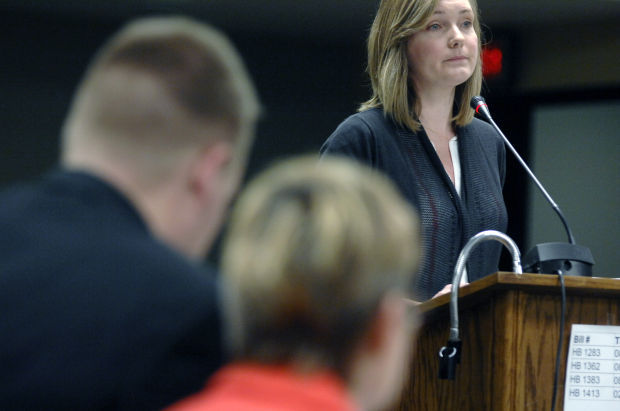 Renae Ahlberg, a parent from Towner County, testifies Wednesday at a House Education Committee hearing at the state Capitol in Bismarck in support of HB1283, giving parents notification of mandated assessments in public schools with the ability to opt-out of the tests. Ahlberg said she felt bullied by her child's school to take the assessment tests. 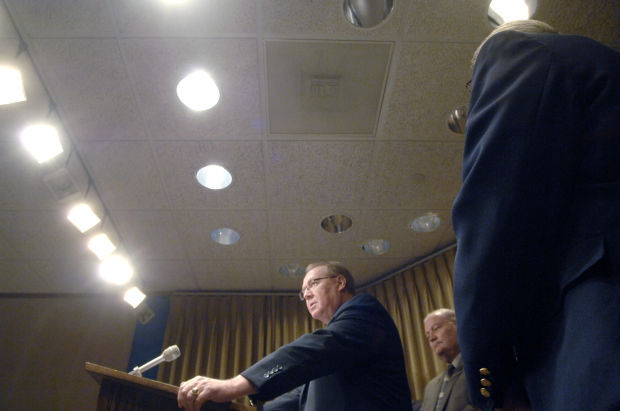 Rep. Jim Kasper, R-Fargo, was among the supporters of the construction of a new governor's residence. “I believe the citizens of North Dakota would be very, very happy to see a new residence that they can look at even from the street and be proud of," he said in 2015.

The first of several bills targeting standardized testing sparked debate Wednesday over parents’ ability to prevent their kids from taking the exams.

The state Department of Public Instruction already allows parents to opt out their children from standardized assessments, but House Bill 1283 would write that option into law. It would also let parents choose to have their kids skip other tests, including the ACT, WorkKeys and Measures of Academic Progress, as well as career interest surveys.

Lawmakers heard from the bill’s sponsor, Rep. Ben Koppelman, R-West Fargo, who told the House Education Committee that parents — not schools — should decide what is best for a child.

North Dakota parents who have tried to opt their kids out of taking a standardized test have encountered varying responses, he said.

He added that some schools told parents that opting out is unlawful or could result in consequences. Schools do not always offer alternative activities for students to complete while their peers take the test, he said.

Several people spoke in favor of the bill, including advocates of the movement to eliminate the Common Core standards for math and English.

One mother said she has tried to opt out her kids and has since decided to homeschool them.

“What the parents are told is they have two options: You can either pick up your child from school, or the child goes to the principal’s office,” Renae Ahlberg said. “In my opinion, that is making an example of the child and trying to scare other parents into not doing the same thing for their children.”

State superintendent Kirsten Baesler said it troubled her that a child would be sent to the principal’s office for opting out, but she said it’s possible there may have been no other space in the school or staff available to supervise an alternative activity.

She said 39 students opted out of standardized tests last year.

“I have never known a principal or a superintendent to go into a home and pull a child out of their bed or a kitchen table to come take this test,” she said. “That is a parent’s right.”

Aimee Copas, executive director of the North Dakota Council of Educational Leaders, spoke against the bill. She said putting a parent’s right to opt out into law would create a slippery slope prompting more families to follow that route.

Opting out hinders parents’ ability to get updates on their students’ progress throughout the year and makes it more difficult for education officials to evaluate school programs, she said.

Though Baesler did not take an official stance on the bill, she defended standardized testing as a way to hold school districts accountable for the government funds they receive.

Schools may become ineligible for certain federal money and tutoring services if they cannot show evidence — such as test scores — to demonstrate they need assistance, she said.

“Unless we have that evidence, those services can’t be provided,” she said.

HB1283 also requires school districts to notify parents of each test that will be administered in addition to their ability to opt out.

Koppelman said he did not intend for that to mean that school districts would have to send letters to every home. A district could notify parents by posting the testing information on its website, according to Koppelman, adding that he would be OK with rewording that provision to make his intent clear.

The House Education Committee is expected Monday to take up another bill related to standardized tests.

The hearing on HB1461 will likely generate significant debate over whether the state should keep the current Common Core standards and stay in the organization developing a new standardized test students will take this spring.

Rep. Jim Kasper, R-Fargo, said his bill would help return authority over the education system to the state Legislature.

The measure would eliminate Common Core from North Dakota classrooms and require a commission selected by lawmakers to develop new standards. Those standards would go to the 2017 Legislature for approval.

It would also force the state to withdraw from the Smarter Balanced Assessment Consortium, which is one of two organizations in the United States developing standardized tests based on the Common Core standards.

Inside some of the world’s most unusual vaccination centers

When Bismarck mother Victoria Ngatia graduated with her master's degree this spring, she fulfilled a longtime dream.

The public school systems in Bismarck and Mandan have released sites and schedules for free meals this summer.

The North Dakota Board of Higher Education and the university system chancellor want Gov. Doug Burgum to veto a bill that would prevent a scho…

6 candidates to vie for 3 spots on Mandan School Board

Six people have filed to run for the Mandan School Board. The election will be held in June.

An educational software program used by about 6,000 North Dakota students during the pandemic will remain available at no cost for another two years.

Voters to decide on new Mandan schools in special election

Mandan voters will decide whether to approve an $84 million bond to build two new schools Tuesday.

Renae Ahlberg, a parent from Towner County, testifies Wednesday at a House Education Committee hearing at the state Capitol in Bismarck in support of HB1283, giving parents notification of mandated assessments in public schools with the ability to opt-out of the tests. Ahlberg said she felt bullied by her child's school to take the assessment tests.

Rep. Jim Kasper, R-Fargo, was among the supporters of the construction of a new governor's residence. “I believe the citizens of North Dakota would be very, very happy to see a new residence that they can look at even from the street and be proud of," he said in 2015.