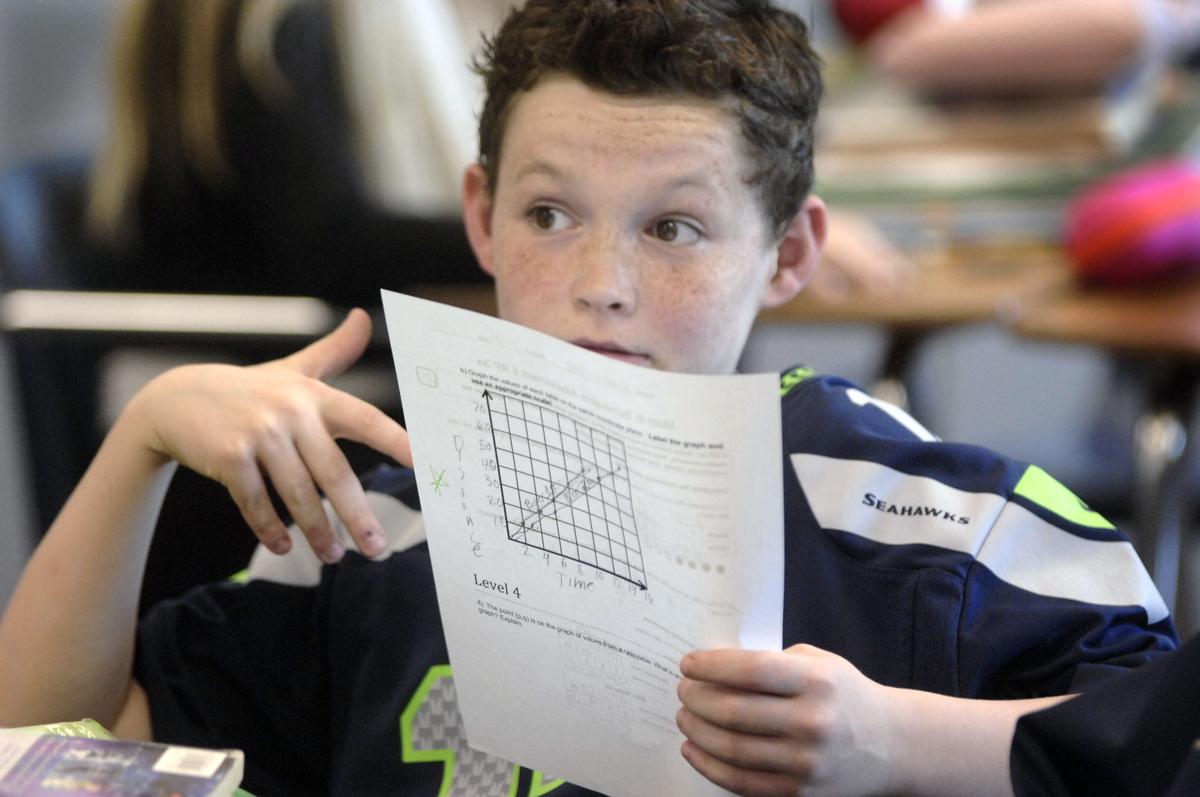 Ryan Grinage, a sixth-grade student at Horizon Middle School in Bismarck, talks with math teacher Marlena Zaun after test papers were handed out to the class recently. Students throughout North Dakota will soon be taught math and English based on a new set of standards replacing Common Core, State Superintendent Kirsten Baesler announced last week. 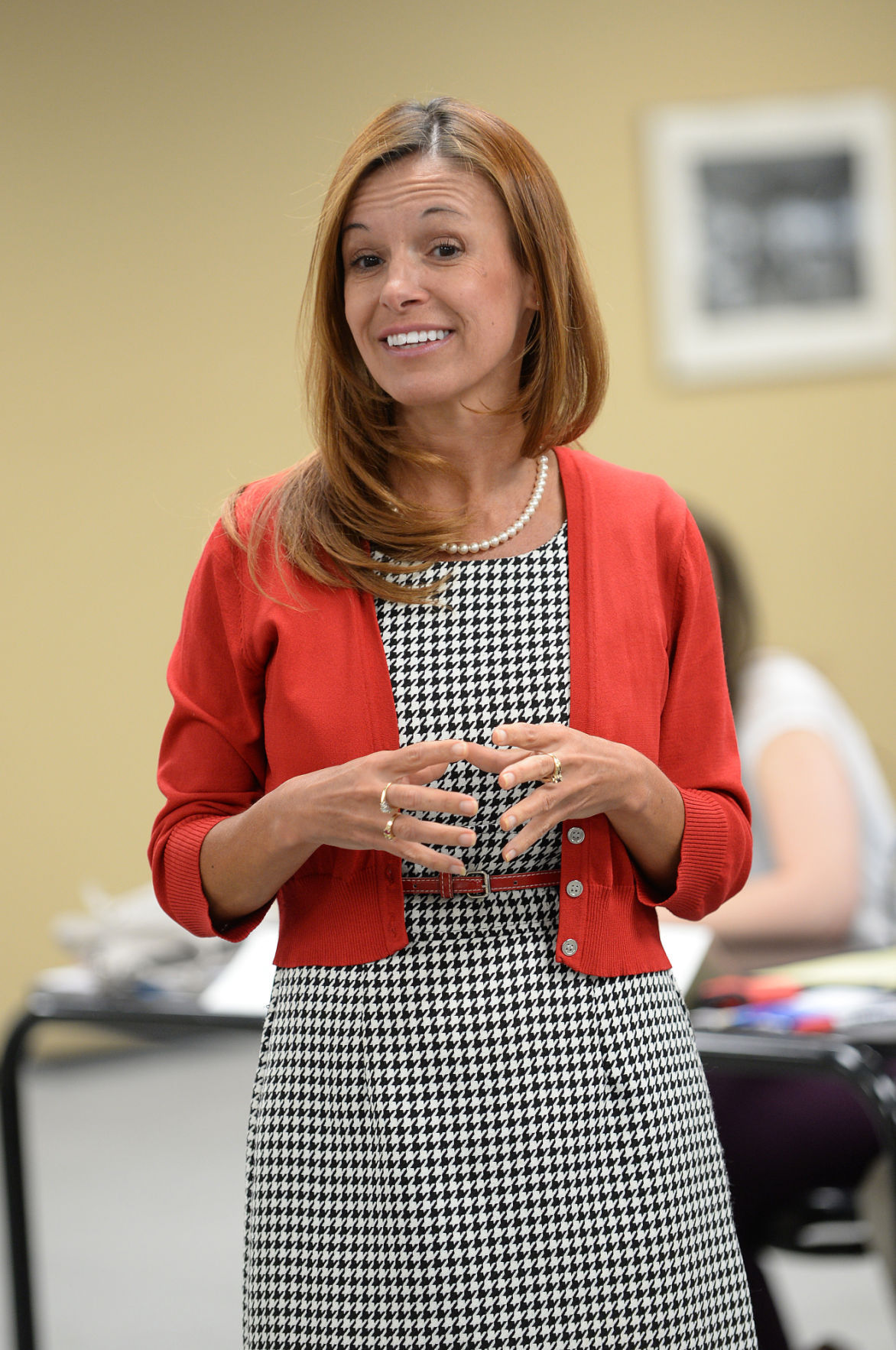 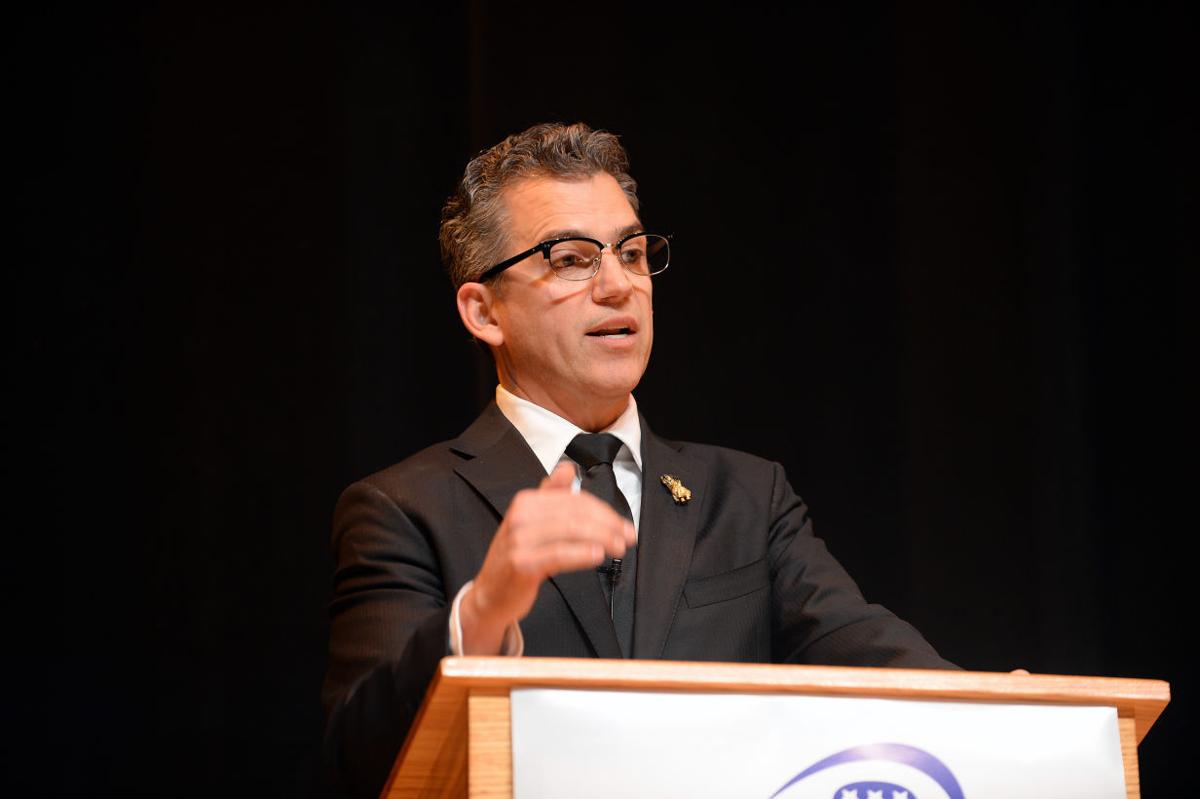 Math and English lessons for North Dakota students will soon be based on a new set of standards written over the next year to replace Common Core, State Superintendent Kirsten Baesler announced Tuesday.

Students will continue to take the Smarter Balanced standardized test in spring 2017 until the new standards are finished, she said during a press conference at the Capitol. The state will then look for an assessment aligned to the future standards.

Baesler said she anticipates educators tasked with writing the new standards will wrap up their work in early 2017 so schools can begin implementing them that fall.

Common Core marked the first effort to use the same education standards for grades K-12 in all states, a move which came under fire across the nation for exemplifying an overreach of the federal government. The majority of states adopted the standards, and North Dakota’s participation has drawn criticism from some Republican lawmakers, parents and community members.

A legislative effort failed last year to force North Dakota to sever ties with the Smarter Balanced Assessment Consortium, an organization of states that developed the standardized test students take on computers each spring to measure their ability to meet Common Core standards. Opponents then filed a lawsuit against the state for its membership in the consortium.

Baesler on Tuesday acknowledged that the backlash flared up again last month at the state Republican convention in Fargo. She referenced the strong support for Common Core opponent Rep. Rick Becker, R-Bismarck, in his campaign for governor. Becker, however, did not secure the nomination at the convention.

“What that did was affirm this is a process that we need to begin at this point in time, that this is what our community, our state wants to do,” she said.

“I am glad they are making a move in the right direction,” he said. “Clearly, the control of the education system needs to be brought back to the state and to the schools, teachers and parents.”

He called the move a first step and said opponents’ voices are starting to be heard. Without their efforts, the state would not be rewriting its standards, he said.

Baesler's challenger in her bid for re-election, Joe Chiang, has also criticized Common Core. The Bismarck Tribune made three attempts to seek a comment from him Tuesday afternoon but was unable to reach him.

Leaders of several education organizations spoke Tuesday in support of Baesler’s effort to revise the standards.

“For many years, we have asked our best teachers to come together and review standards for each subject we teach in a three- to five-year cycle,” he said.

Baesler said the new federal education law replacing No Child Left Behind regulations provides an opportune time to review the standards, which have been used in all North Dakota schools the past three years. Some schools chose to implement them earlier.

Since then, teachers have identified instances in which certain standards don’t pair well or should be moved to a different grade level, Baesler said.

Nick Archuleta, president of the North Dakota United union for teachers and public employees, agreed with her assessment.

“Teachers want to fine-tune these standards and make sure they are relevant to the age group,” he said.

The Department of Public Instruction will seek applications from teachers and professors interested in sitting on committees to write the new standards.

They will research other states’ standards, as well as the existing ones in North Dakota, Baesler said. The committees will meet for the first time in June.

The department also will convene three review committees of elected leaders, business and industry leaders, and parents and other citizens to offer feedback on the educators’ work.

Drafts of the standards will be available for public comment, Baesler said.

“This process will be thoughtful, deliberate and transparent,” she said.

Becker said it’s important to bring people onto the committees who have an appreciation of what North Dakota is looking for and will not merely tout the lines of out-of-state academics.

“I have full faith, if there is a true array of people on the committees who have that in mind, it will be a success,” he said.

Baesler said applications to sit on the committees will be available on DPI’s website Friday.

Searching for a test

After the standards are written, the state next year will seek a test assessing students’ ability to meet them.

“Once we have these new standards, we will need a test that aligns to those standards,” Baesler said.

The state will request proposals from testing organizations, which must ensure the exam they offer is relevant to North Dakota’s new standards, she said.

In February, lawmakers on the interim Education Committee heard from the heads of two of those entities — the Smarter Balanced Assessment Consortium and the ACT Aspire, which offer different standardized tests used in various states.

Baesler said Tuesday that North Dakota’s options are not limited to those two groups.

Students in grades 3-8 and 11 currently are taking the annual Smarter Balanced test for the second year in North Dakota.

A group writing new math and English standards to be used in North Dakota public schools is expected to have a first draft by end of business Friday.

Ryan Grinage, a sixth-grade student at Horizon Middle School in Bismarck, talks with math teacher Marlena Zaun after test papers were handed out to the class recently. Students throughout North Dakota will soon be taught math and English based on a new set of standards replacing Common Core, State Superintendent Kirsten Baesler announced last week.