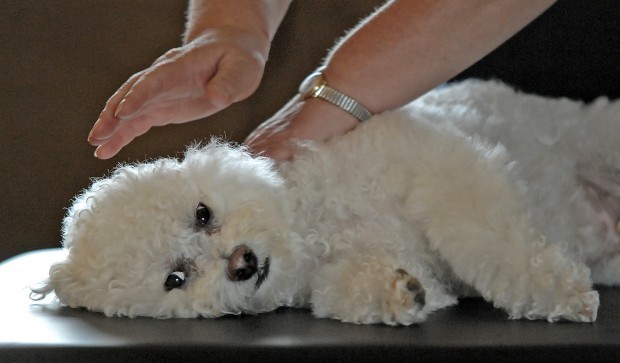 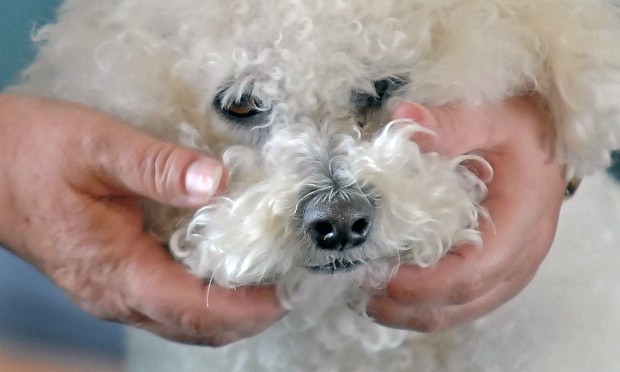 Loki, a 6-year-old bichon frise, gets her muzzle massaged by Claudia Jahraus. 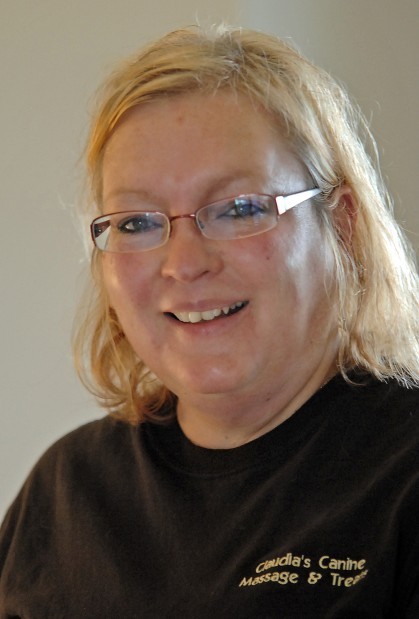 Claudia Jahraus hopes to turn her canine massage business into a full-time venture for pet owners in the Bismarck-Mandan area.

Claudia Jahraus uses her fingers to massage between her client’s ribs. His eyelids get heavy and start to close. Then she runs her hands in long strokes from his head all the way to his ... tail.

The client, named Loki, is a 6-year-old bichon frise who has been getting massages from Jahraus for seven to eight months. Jahraus is a certified canine therapeutic massage therapist and owner of Claudia’s Canine Massage and Treats, an in-home massage service for dogs.

Loki’s owner, Wendi Holz, said Loki and her other dog, Bailey, have benefited greatly from massage.

“I just wanted something for my dogs that would be healthy and good for them,” she said.

Loki and Bailey participate in agility and obedience competitions. Since starting massage, Holz said they have both become more focused in competition. She also uses the dogs in pet therapy for humans, and she said the dogs have become much more confident.

Loki used to run and hide when someone came into the house. He would never look people in the eyes. Now he comes to the door with his tail wagging.

Holz said often the dogs won’t let Jahraus stop after she has started a massage and will fight over which one gets to go first.

Jahraus has been doing canine massage since last June. She went to Rocky Mountain School of Animal Acupressure and Massage for her certification and started her business in January. She is also a direct support professional with Pride Inc. and does massage on the side.

Jahraus started canine massage because she wanted to work with animals but was too squeamish to be a veterinarian.

“I love my dogs. I love everybody’s dogs. It was a good fit for me,” she said.

Jahraus has done massages for about 20 dogs so far. She prefers to do massages four times consecutively on each dog to help the dog get used to it and learn what works for them. She charges $40 for a one-time massage and $25 per massage for four massages. She also sells all-natural treats.

To start a massage, Jahraus runs her hands from the top of the dog’s head all way down its leg to calm it. She then flicks her fingers up and down on top of their head. She moves around their eyes, squeezing to release endorphins. She presses along their muzzle to help clear their sinuses. Finally, she rubs their gums to increase circulation in their mouth and prevent tooth decay and gum disease.

Loki does not like his face touched as much, so every now and then Jahraus rubs his temporal lobes to calm him. As she presses his ears, neck and between his ribs, his tongue starts to hang out.

To finish off, Jahraus kneads Loki’s back muscles and skin, which circulates blood to his inner organs. She rubs his hips and all down his legs to the tendons in his foot and pads of his paws. She even massages his tail, which she said has 23 bones and is an extension of the spine. She twists it — it’s like cranking an old car, she said.

Jahraus said using the right amount of pressure is important, which she practiced by pressing on a scale. She said there are different purposes for each stroke and pressure. With her own dog, Angel, a 15-year-old German shepherd cross who has arthritis, she uses lighter pressure.

Jahraus said she has seen improvement in her own dogs as well as her clients’ pets. Her other dog, Peyton, a 4-year-old golden retriever, was abused as a puppy and was fearful, but now he is doing obedience events.

“I feel like I’m helping the dogs,” she said.

More information about Claudia's Canine Massage and Treats is available at www.claudiascanines.com.

South 12th Street between Indiana and Arbor avenues in Bismarck was closed for several hours Saturday due to downed power lines, and numerous …

The U.S. Postal Service is moving forward with a plan to relocate the Mandan post office.

December to begin with near-record heat across western North Dakota

December will begin in North Dakota with the possibility of near-record warmth.

Loki, a 6-year-old bichon frise, gets her muzzle massaged by Claudia Jahraus.

Claudia Jahraus hopes to turn her canine massage business into a full-time venture for pet owners in the Bismarck-Mandan area.