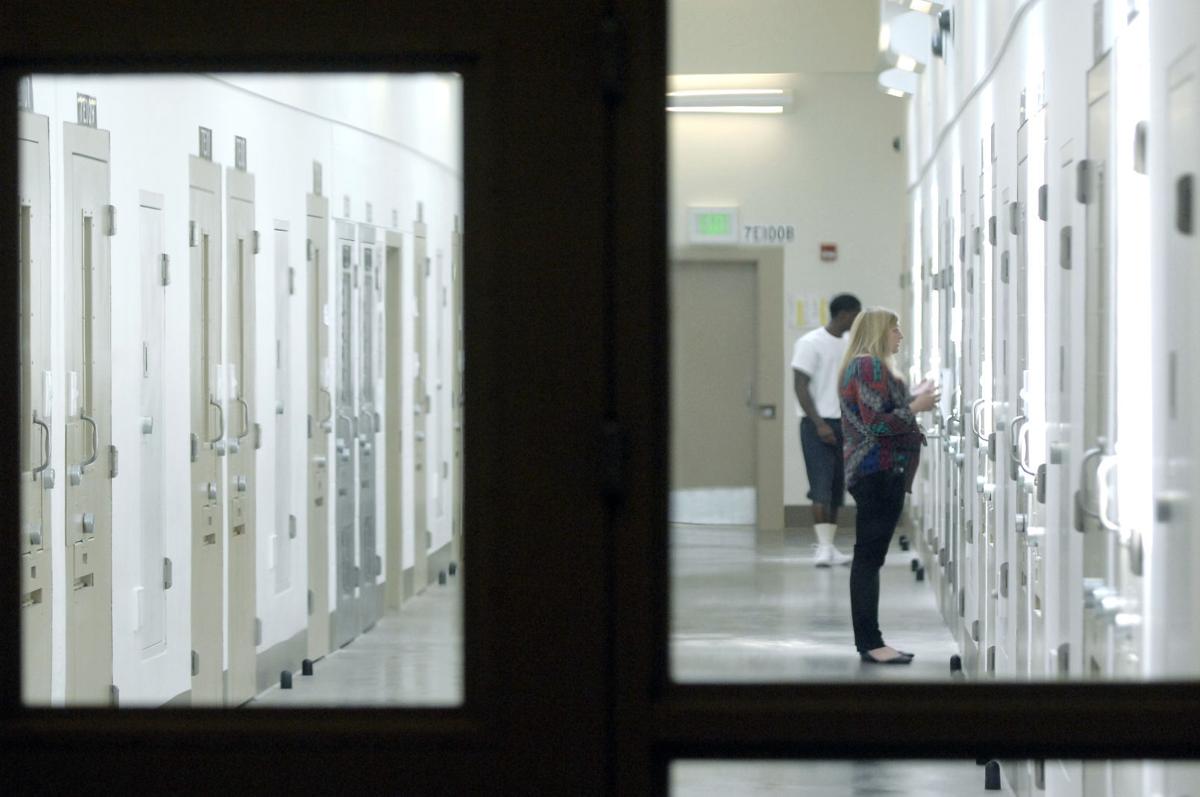 Lisa Peterson, clinical director, talks through a cell door while de-escalating a situation with an inmate in the administrative segregation unit at the North Dakota State Penitentiary last month. The inmate was forcefully kicking his cell door to gain the attention of the correction officers. In the past, officers would immediately respond to quiet the inmate, thus reinforcing negative behavior. Officers and staff now wait for time to pass before making contact with the inmate. 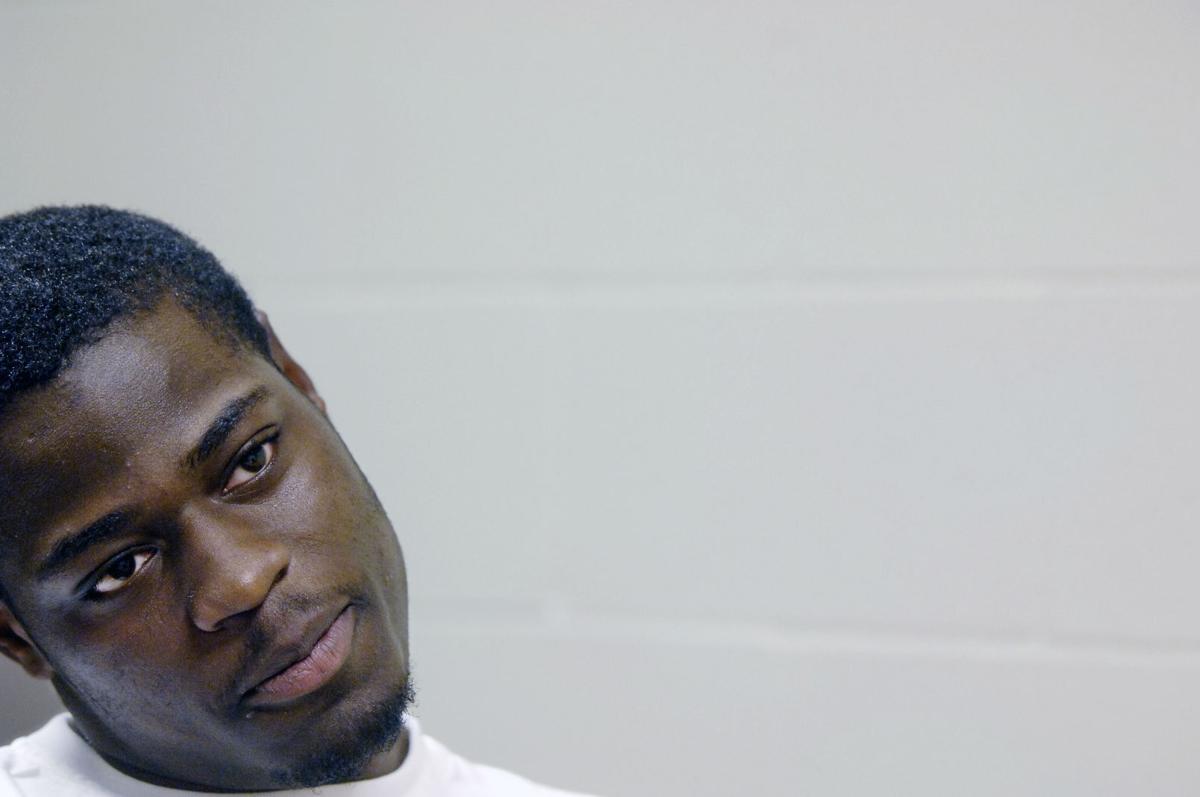 Theotis Johnson Jr., 23, is in his second stint in the administrative segregation unit at the North Dakota State Penitentiary. Both times he was placed in seclusion after being involved in fights while grouped with the general population.

Theotis Johnson Jr. spent nearly eight months in solitary confinement after he got into a fight in the state penitentiary last year.

That means he sat alone in a cell 23 hours a day, seven days a week.

With no one to talk to, he learned to tell time from the shadows on the cell walls.

"It changes you being back there," he said. "In a closed box, it gets you to think about your actions. It can also make you crazy."

Johnson is serving time for an armed gas station robbery he committed in Wahpeton in 2013. He had been a football player at the North Dakota State College of Science.

During his time in segregation, officials left the 23-year-old to sit in his cell and think. Then they placed him back with the general population.

Over the next five months, he was in and out of solitary for violent behavior.

After a fight in March, administrators returned him to segregation for an extended stay.

This time, they wanted to try something different — work with him to improve his behavior.

For a long time, prison officials added up the histories of men like Johnson and called them "the worst of the worst." These men caused violence in the prison and reoffended almost immediately after they were released.

Now, the same officials are asking if they themselves were not partly to blame.

Since the 1980s, officials at the North Dakota State Penitentiary put prisoners who acted violently or repeatedly disobeyed rules into solitary confinement, believing that it made the prison safer. At its peak last summer, 101 inmates were housed in seclusion. The penitentiary housed about 800 at the time.

In a radical policy reversal inspired by research that solitary confinement harms people and does not make the prison safer, officials reduced the number of people in seclusion by about 70 percent from its peak over the past year. They report no jump in violence since.

The segregation wing, once conceived as a place to seclude the most dangerous, is being reimagined as a home for rehabilitation. Through group activities, behavioral health treatment and a system of incentives, administrators seek to teach their most dangerous prisoners to be less violent.

Though some inmates are skeptical of the new programming, they say conditions and interactions with guards have greatly improved.

Upgrading the solitary confinement cell block, officially known as the administrative segregation unit, was a top priority when deciding to renovate the prison seven years ago. Nearly all of the facility's 60 segregation beds were full and corrections officers protested unsafe conditions in the wing.

At a legislative planning meeting in January 2008, Cpt. Jeff Wolf said overcrowding in the segregation wing resulted in the "best of the worst" inmates going back to general population to make room for other, more dangerous inmates. This created a risky situation for inmates and staff, he said, according to the minutes.

Meanwhile, a study of the facility anticipated a 33 percent increase over 10 years in the state prison population. Planners assumed the number of violent prisoners requiring seclusion would grow proportionally.

In the summer of 2015, about 14 months after opening the 106-bed wing, administrators said it was almost always full.

How did it happen? What once might have earned a prisoner a warning or lost privileges now landed him in segregation.

"It became really nebulous what was a danger to the institution. Was telling me no, when I told you to tuck in your shirt, a danger?" said Karianne Wolfer, director of correctional practices.

And officials never had a good process for letting people out.

"There was no scientific piece to it," Warden Colby Braun said. "You just had to make a decision, an icky decision."

Though they built big, they lacked the staffing for it.

"Watching the unit at max capacity was like watching an eight-hour overseas flight," Wolfer said.

Guards raced up and down the halls. They delivered meals, toilet paper and soap. They calmed inmates who acted out and moved them to and from recreation pens.

It was a matter of "throw you back there 'til you change," said Johnson, who was a prisoner in solitary at the time.

He said he sometimes lashed out at the guards.

"All they do is walk past and do count. Who else can you let your frustration out on?" he said.

Seeing the wing fill up was one of the factors that led prison administrators to change course.

They also began learning about the long-term effects of segregation. Research has shown that segregation can make people who are mentally ill worse and trigger psychological problems in healthy people.

Administrators visited a prison in Norway and were struck by the idea that prison should be more like the outside. The state penitentiary got new leadership.

Also, the department found that a "behavioral modification program" at Jamestown's James River Correctional Center led to improvements in medical compliance and fewer incidences requiring staff to use force.

There was no clear blueprint for reforming the unit, administrators said. But they knew the first step was getting the numbers down. They could not offer individualized treatment to 100 people.

They combed through the list of inmates in segregation and identified groups, about 10 at a time, who were ready to leave. They created a transitional unit and started moving people out.

"It became a point when we had to take a pretty significant risk. We had to trust the data that segregation is not helping you anyway," Peterson said.

On April 25, 2015, there were 88 people in solitary. Exactly a year later, there were 28, including people transitioning back to general population. The number now fluctuates between 28 and 40.

On one memorable day, administrators popped the doors of everyone's cells in the least restrictive segregation unit and said they were going back to general population.

At first, some guys tried to close their doors, Fode, the unit manager, said. They thought it was a joke and they would get in trouble.

When the men finally came out, "it was a flood of touching and hand shaking," Fode recalls.

"That was love," Johnson said of the moment. "Just to interact with someone, to talk to someone, it was a great feeling."

People who had fought with each other apologized to each other.

Now, the prison is grappling with how to stop the flow of people into solitary and offer treatment to those remaining.

Administrators recently limited the offenses that can be punished with solitary confinement to the most serious.

Though some repeat rule violators can be punished with short stints in solitary, they are usually released within 10 days, Fode said.

Fode said, from Feb. 25 to March 25, 54 inmates were reviewed for placement in segregation. Only one remained there for an extended stay.

Staff offer individualized treatment to inmates and have created a path to get people out of segregation.

Officers have more contact with inmates, which gives them a basis for releasing someone to general population, said Braun, the warden.

Administrators said they still fight the urge to stash people in segregation.

"It’s hard to let people out when you know they’ve done something kind of nasty. It was easier for me to say let’s keep them locked up a little bit longer, because I’m not sure yet," Braun said. "That’s where it takes the whole team to work together."

This time, in solitary

Johnson has spent time in segregation as it was, and as it is now. He said it's significantly different.

Officers come by his cell and ask questions like "What do you want to do when you get out?" and "What can help you change?"

At first, he didn't want to answer them.

"I thought it was personal," he said.

Then he realized they wanted to help.

He said he is learning the difference between a "landmine" and a "grenade." You can't run from a landmine, but you can from a grenade.

"If you let words get the best of you, you stoop down to their level," said Johnson, adding he wants to go back to general population, though it makes him nervous. "There's a lot of opportunity to make mistakes."

How is he going to get there?

Do what he's told, take his medication, go to class, avoid causing a commotion and "try to change for the better."

"It changes you being back there," he said. "In a closed box, it gets you to think about your actions. It can also make you crazy."

"It’s hard to let people out when you know they’ve done something kind of nasty. It was easier for me to say let’s keep them locked up a little bit longer, because I’m not sure yet. That’s where it takes the whole team to work together."

In a radical policy reversal inspired by research that solitary confinement hurts people and makes the prison less safe, officials at the North Dakota State Penitentiary reduced the number of people in seclusion by about 70 percent. These are their stories.

• "Prison officials change tactics" explains what has led to changes in the use of solitary confinement.

• "Behave your way in, behave your way out" looks at newly derived policies that land an inmate in seclusion — and, more importantly, how they can return to the general prison population.

• "Inmate leery of personal interaction" tells the story of Jacob Scarberry and the time he has spent in seclusion.

Reducing the population in the 106-bed solitary confinement wing has emptied an entire cell block. With continued overcrowding at the penitent…

Jacob Scarberry has been in the state penitentiary before, and he has a history of assaulting inmates and staff.

Lisa Peterson, clinical director, talks through a cell door while de-escalating a situation with an inmate in the administrative segregation unit at the North Dakota State Penitentiary last month. The inmate was forcefully kicking his cell door to gain the attention of the correction officers. In the past, officers would immediately respond to quiet the inmate, thus reinforcing negative behavior. Officers and staff now wait for time to pass before making contact with the inmate.

Theotis Johnson Jr., 23, is in his second stint in the administrative segregation unit at the North Dakota State Penitentiary. Both times he was placed in seclusion after being involved in fights while grouped with the general population.