The man convicted of the brutal slayings of four people at a property management business in Mandan nearly three years ago will spend the rest of his life in prison.

South Central District Judge David Reich on Tuesday ordered Chad Isaak to spend four consecutive life sentences behind bars, one for each of the victims of the April 1, 2019, killings at RJR Maintenance and Management on the Strip. Isaak will not be given a chance at parole.

Reich's sentence followed the recommendation of Assistant Morton County State's Attorney Gabrielle Goter. She told the judge that Isaak's lack of a criminal history was outweighed by the fact that the killings were premeditated and without provocation. She also said Isaak has shown no remorse and refused to undergo a mental health assessment during the presentence investigation, leading prosecutors to believe he's capable of committing more crimes.

Defense attorney Jesse Walstad had asked Reich to give his client a chance at parole, saying Isaak might be a different person years from now.

"We can't see three decades into the future," Walstad said. "The only way to know if a person is ready for parole is the test of time."

"When you talk about a just result and the possibility of redemption, Mr. Isaak doesn't admit to the crimes that he's been convicted of and has not shown any remorse in this case," the judge said.

The sentence prompted some cheers and clapping from the audience in the packed courtroom. Isaak showed little emotion. He can appeal. When given a chance earlier in the hearing to speak, he said, "I can honestly tell you I'm not a murderer, and that's all I have to say."

A jury in August convicted Isaak, 47, a Washburn chiropractor, in the deaths of RJR co-owner Robert Fakler, 52; and employees Adam Fuehrer, 42; Bill Cobb, 50; and Lois Cobb, 45. The Cobbs were married. Three of the victims were shot, and among the four they suffered more than 100 stab wounds, according to trial testimony.

The consecutive life sentences are the "only way that justice can be given for each individual victim in this case," Reich said.

Several family members of victims testified during the hearing, which lasted about 1 ½ hours.

Shirley Metz, Fuehrer's stepmother, set aside the prepared statement she had brought because she couldn't read it through tear-filled eyes, and spoke directly to Isaak.

"You took my kid away from me and you had no right," Metz said. "You're a monster. I have to forgive myself for hating you."

Metz paused at one point to thank people who have supported her, saying she feels bad for everybody involved and specifically mentioning Isaak's family. Metz sat through the entire three-week trial but said she did not see many of the photos from the crime scene.

"You saw it. You know what you did," she said to Isaak, adding that she doubted he was capable of having any feelings, then saying "but I could be wrong."

Robert Fakler's wife, Jackie, who owns RJR, shared similar feelings. She referred to Isaak only by his last name during her statement, and told him that he needs to thank his family for supporting him.

"Think about what you've taken from them," she said.

Isaak's actions were those of a coward, Fakler said. In a war, she said, each side has weapons. When a person hunts, the prey has the chance to flee.

The details of that day still haunt Jamie Binstock, daughter of Robert and Jackie Fakler. She collapsed when she heard about the incident, at first thinking her father might have suffered a heart attack. She learned more during an hourlong drive to Bismarck, and it was she who later contacted the Cobb family.

"I had to give that awful grief to someone I never met," she said.

Binstock told Isaak she didn't want his life to end "because your family doesn't need to suffer," and that he should be in prison so no one else gets hurt and as punishment for his deeds.

"I hope you feel lifetimes of suffering," she said. "I want you to sob the same way I did."

Binstock and her husband moved to Bismarck after the slayings and are now full-time employees at RJR. She described the commitment of the company's employees as a "pride that is incomparable."

"We're still here," Binstock said. "If your goal was to ruin RJR, you failed."

Isaak's family members did not speak in court and declined to comment after the hearing.

RJR managed the Washburn property where Isaak’s mobile home sat, but no clear motive in the slayings was ever established. Prosecutors early in the trial told jurors the evidence would come together like the pieces of a puzzle to show Isaak was the killer. They presented extensive DNA and fiber evidence, and referred to a cache of items in Isaak’s home -- spent ammunition casings, a knife, gun parts that smelled of bleach -- as his trophies from the killings.

Surveillance video from RJR and several other businesses on the Strip showed the attack was planned at least a week in advance, and RJR video caught a lone assailant's arrival and departure on the day of the killings, prosecutors said.

Defense attorneys said the case against Isaak was one of “confirmation bias,” meaning investigators determined Isaak was the killer and sought only to prove that. The defense claimed several other suspects were overlooked or ignored, including angry tenants, the ex-husband of a woman with whom Robert Fakler had a longtime affair, and members of a motorcycle gang who had been kicked out of an RJR shop party.

Jury selection in the case started Aug. 2 and took two days. Attorneys questioned potential jurors individually while others were out of the courtroom. The prosecution rested on the 12th day. The defense team called six witnesses on Aug. 18. Jurors after hearing closing arguments got the case the afternoon of Aug. 19. They returned guilty verdicts the next morning after deliberating about 4 ¼ hours over the two days.

Isaak was convicted of four counts of murder, felony counts of burglary and unlawful entry into a vehicle, and a misdemeanor count of unauthorized use of a vehicle. Authorities alleged Isaak took an RJR pickup when he left the company's building on the day of the murders.

Reich sentenced Isaak to a total of about 16 years on the lesser charges, to be served at the same time as the life terms for murder. The judge gave Isaak credit for 1,000 days already served on each murder count, and for 360 already served on the misdemeanor count. The matter of possible restitution for victims will be decided later.

Photos from the Chad Isaak trial 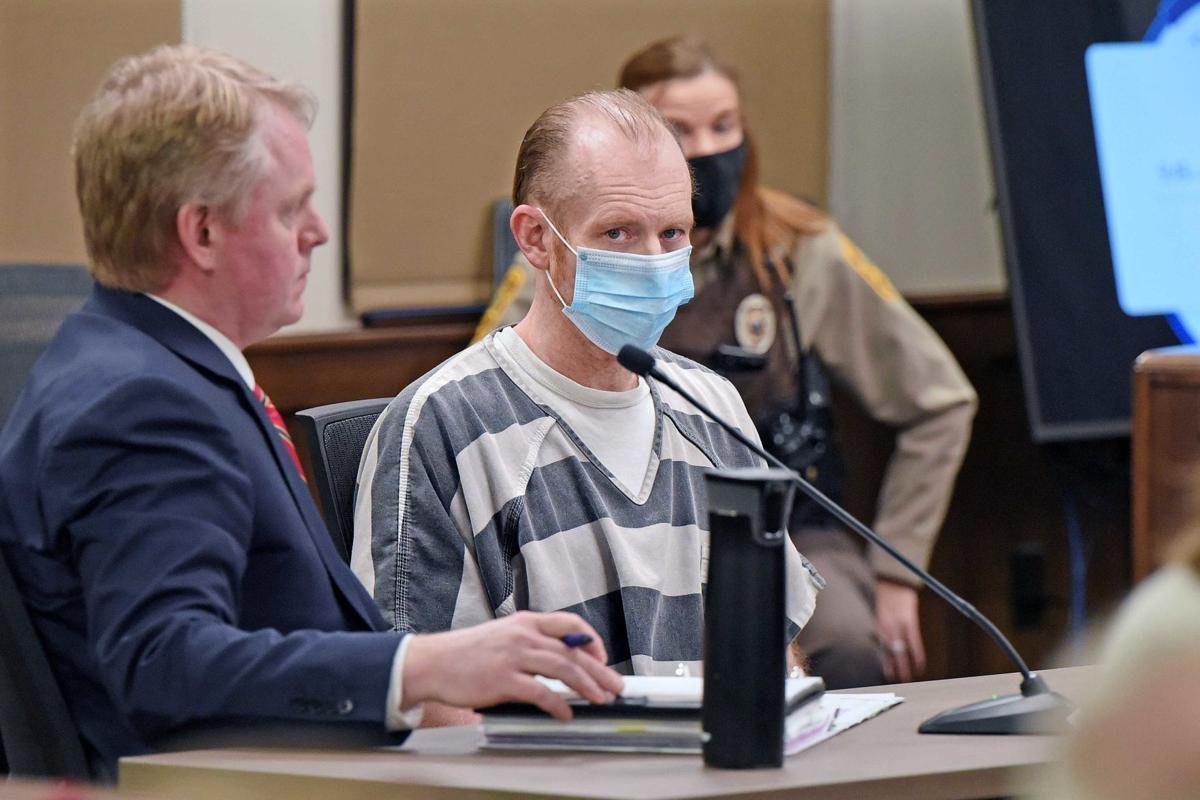 Chad Isaak, with defense attorney Jesse Walstad, during his sentencing in the Morton County Courthouse in Mandan on Tuesday. Isaak received four life sentences without the chance of parole for murdering four people at a Mandan business in 2019. 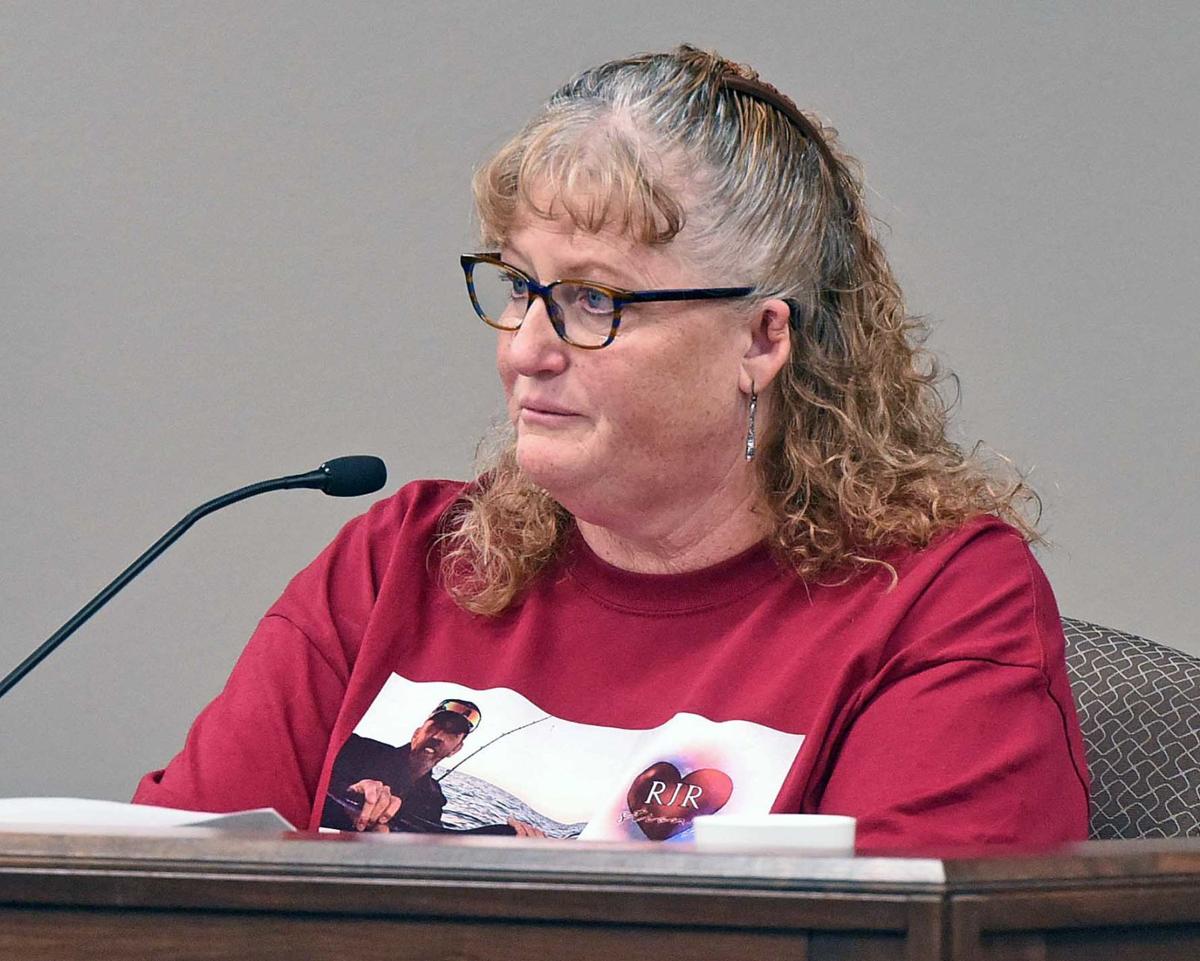 RJR Maintenance and Management owner Jackie Fakler speaks at the sentencing of Chad Isaak on Tuesday at the Morton County Courthouse in Mandan. Isaak received four life sentences without the chance of parole for killing four people at the Mandan business in 2019, including Fakler's husband. 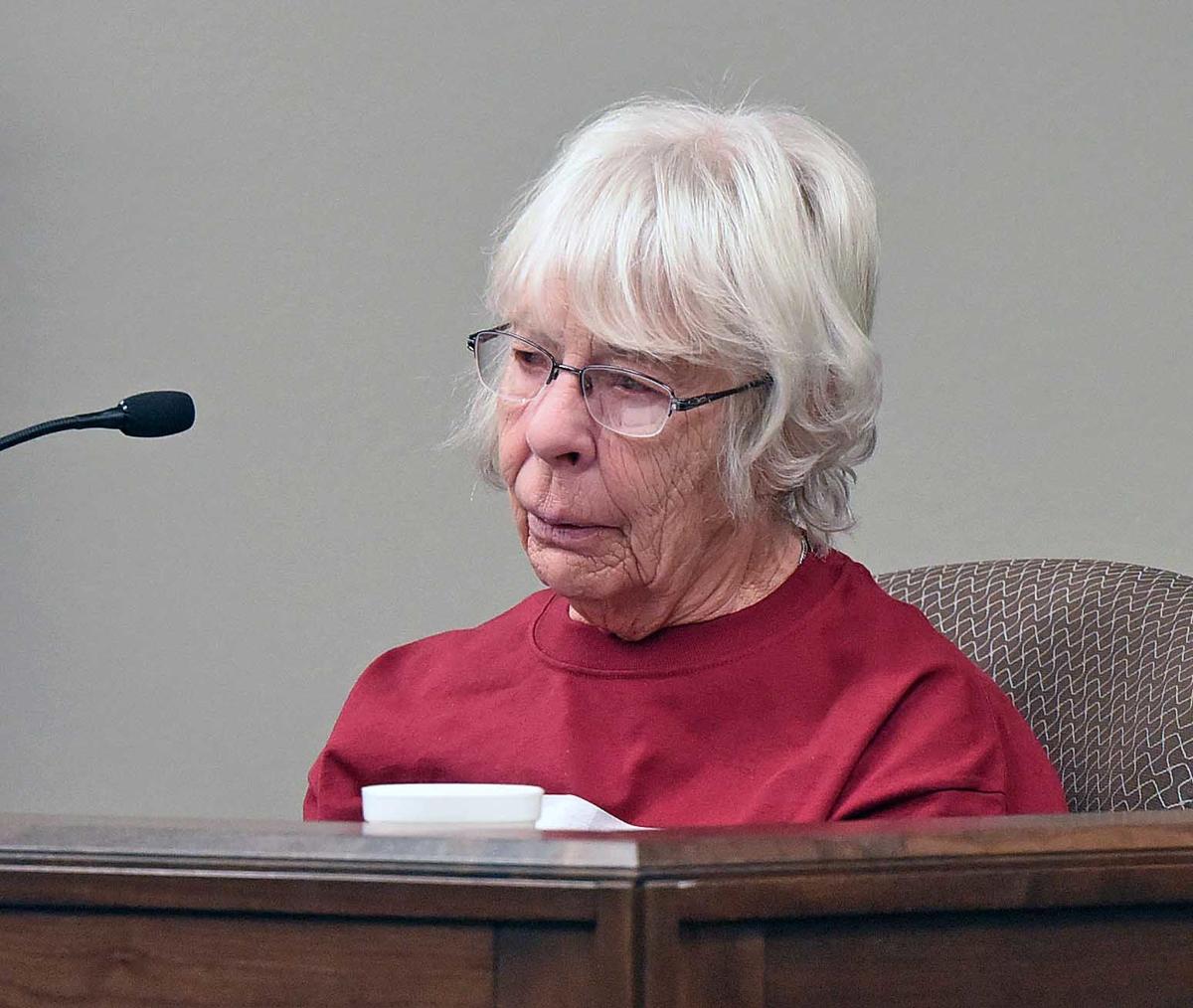 Shirley Metz talks about the impact of losing her stepson Adam Fuehrer in the April 2019 murders of four people at RJR Maintenance and Management in Mandan. Metz spoke during Tuesday's sentencing of Chad Isaak, who received four life sentences without the chance of parole for the killings. 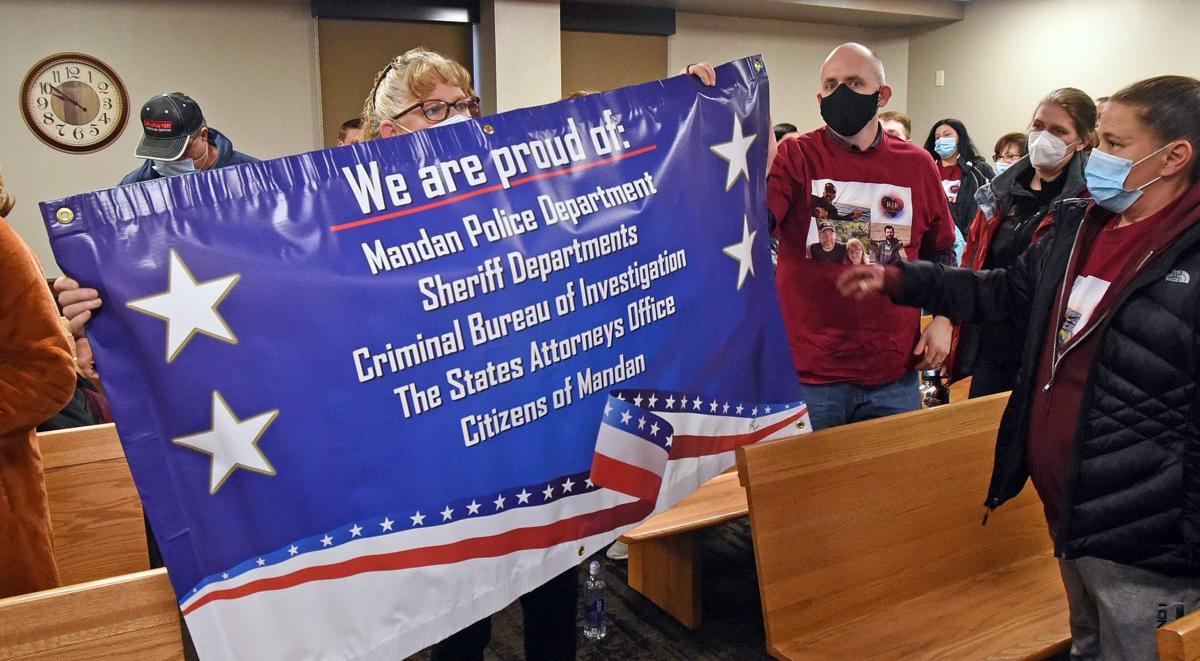 RJR Maintenance and Management owner Jackie Fakler holds up a banner of gratitude at the end of Tuesday's sentencing of Chad Isaak, who was convicted earlier of killing four people at the Mandan business in 2019, including Fakler's husband. 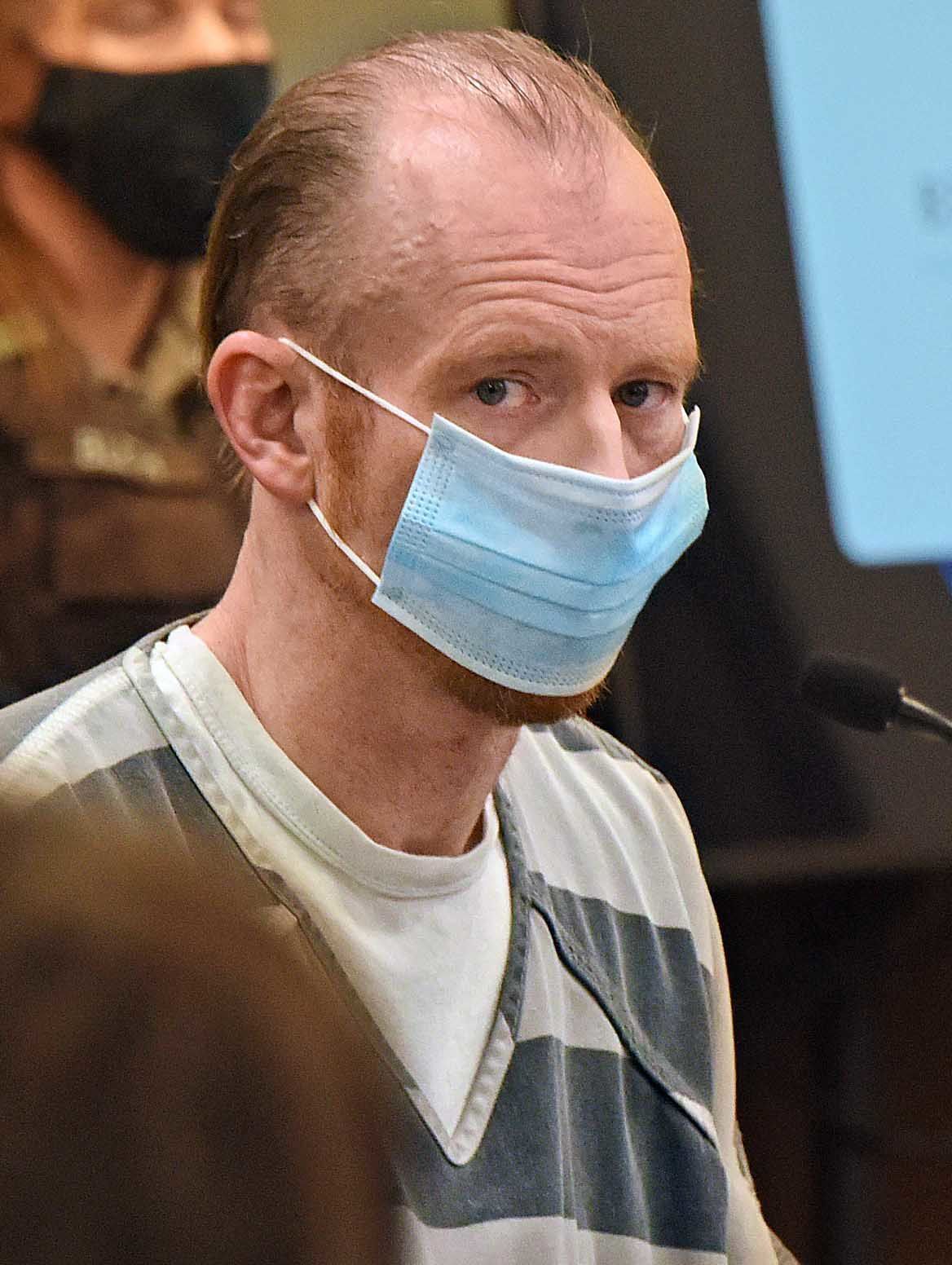 Chad Isaak listens Tuesday during his sentencing at the Morton County Courthouse in Mandan. Isaak received four life sentences without the chance of parole for killing four people at RJR Maintenance and Management in Mandan in April 2019. 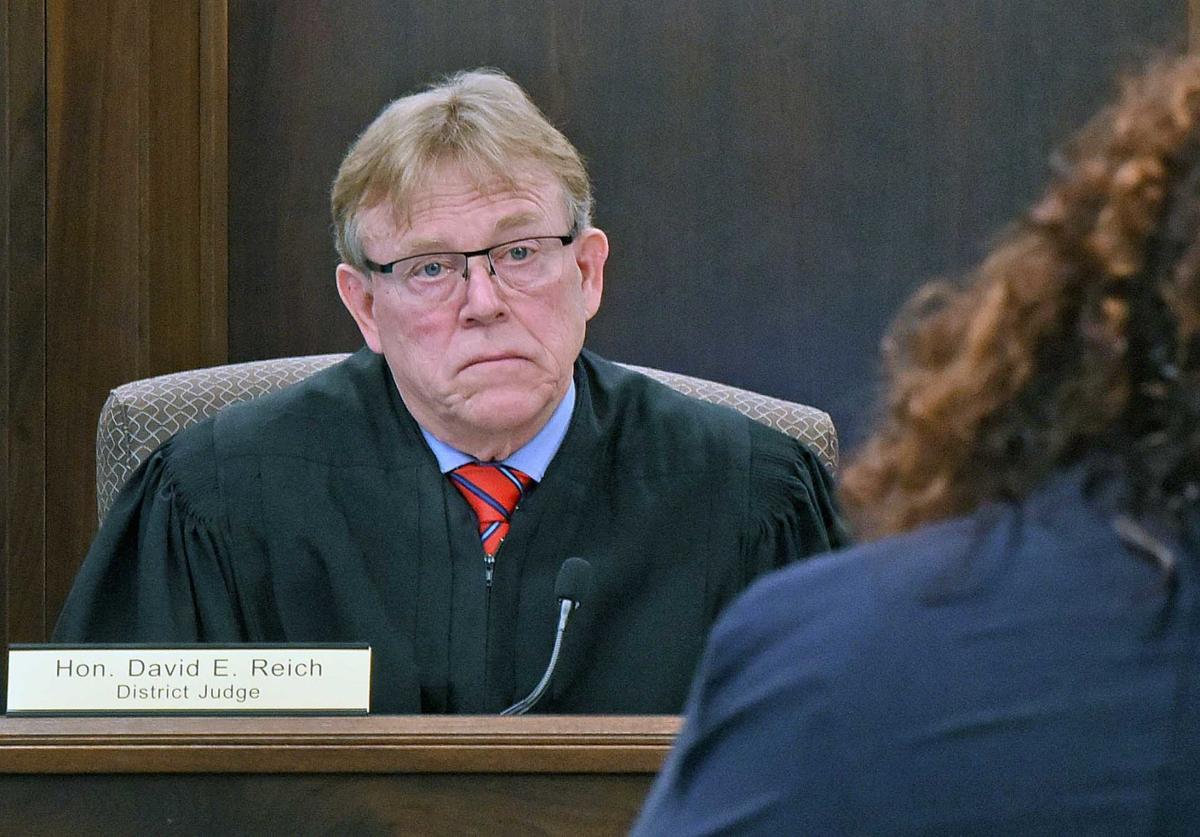