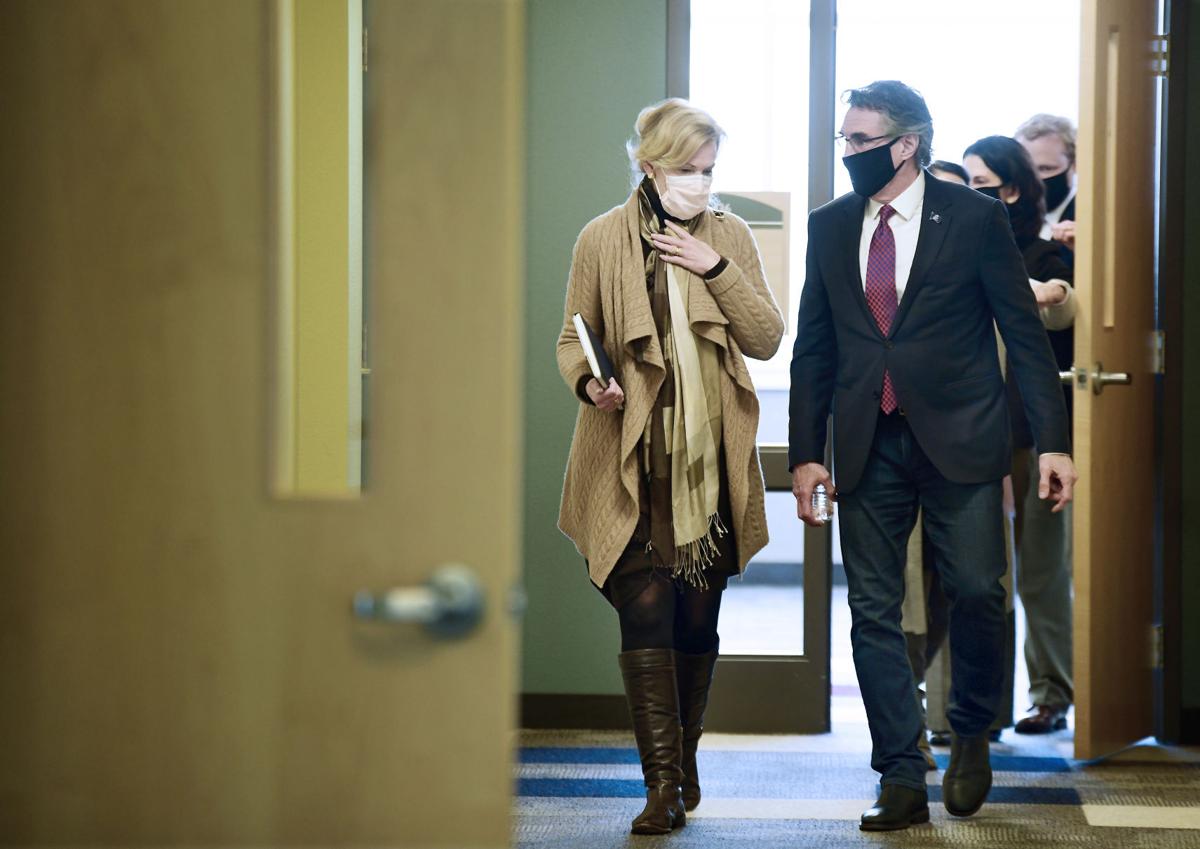 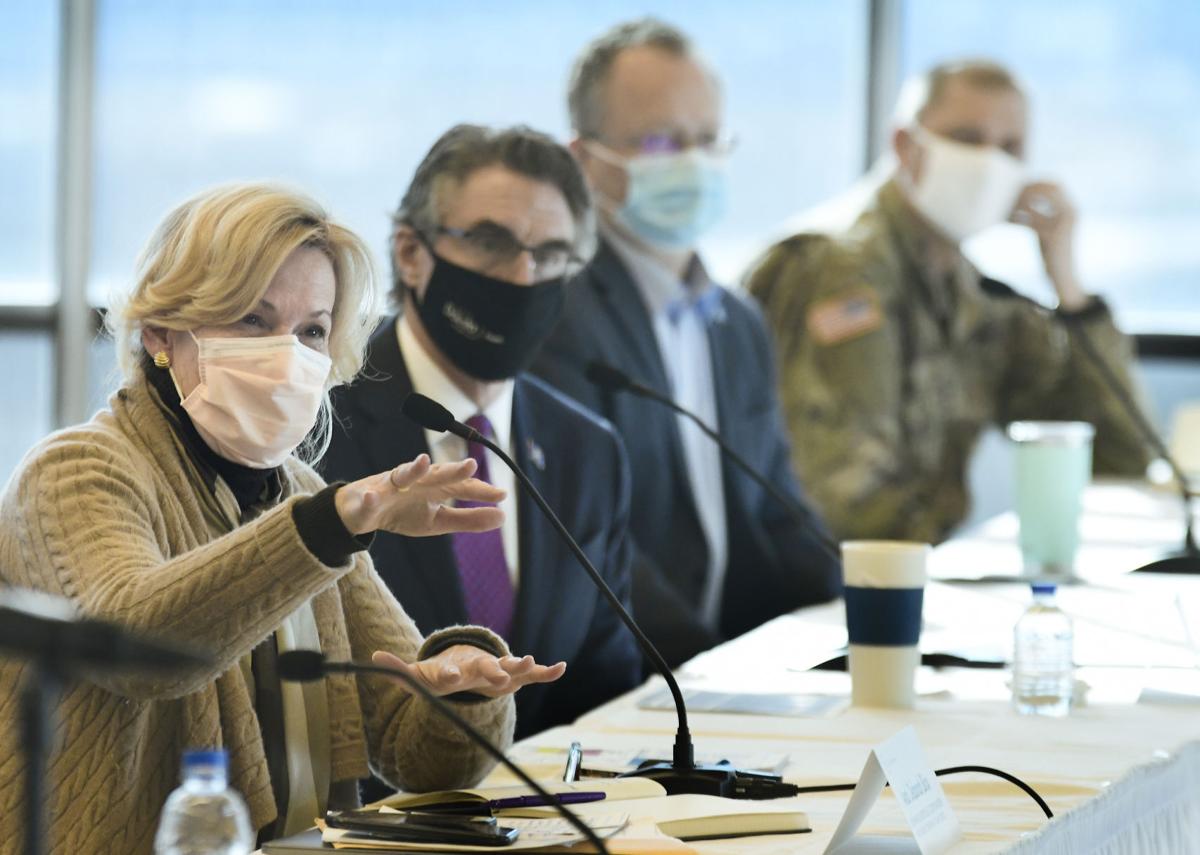 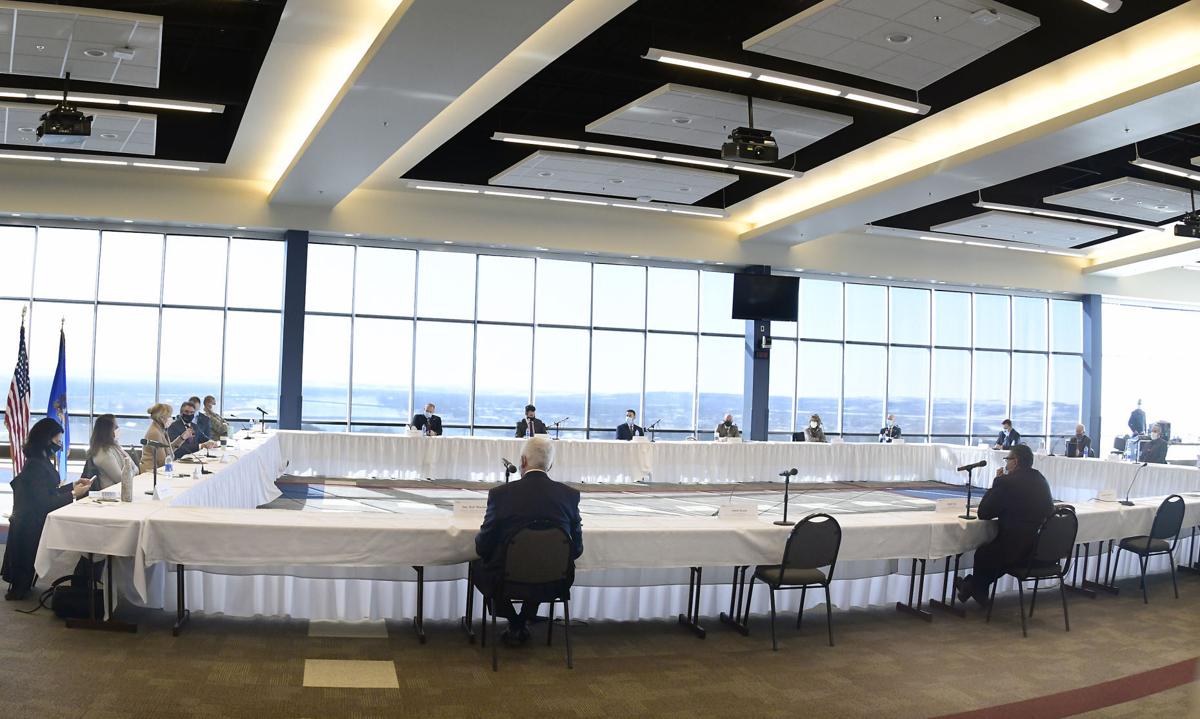 Dr. Deborah Birx, White House Coronavirus Task Force coordinator, talks with Gov. Doug Burgum along with state and local government and medical leaders during a roundtable discussion on the campus of Bismarck State College on Monday.

The White House Coronavirus Task Force coordinator toured Bismarck businesses and met with state, tribal and local leaders Monday to discuss North Dakota's coronavirus response, noting the lowest public use of masks she has seen in her travels.

"Over the last 24 hours as we were here and we were in your grocery stores and in your restaurants and frankly even in your hotels, this is the least use of masks that we have we seen in retail establishments of any place we have been," Dr. Deborah Birx told reporters after the meeting, which was closed to the public. "And we find that deeply unfortunate because you don't know who's infected and you don't know if you're infected yourself."

She declined to name the places she toured in Bismarck but said, "we like to get out to a lot of places."

Her tour has taken her to nearly 40 states since late June. She visited Fargo in late August for a roundtable with state and city leaders. She was headed next to Montana.

She urged the public to wear face masks and practice physical distancing, and called for people under 35 to seek testing after social gatherings, especially if asymptomatic, because "they have to know that they're infected."

"If you're in a public space, out of respect for each other, you should be wearing a mask because you could be infected not knowing you are infected," Birx said was her message during the roundtable.

She commended Gov. Doug Burgum for his "superb job of testing" but noted "a whole other set of cases underneath those cases of asymptomatic young people who are still getting together, or even 40-, 50-, 60-year-olds who I saw throughout Bismarck not wearing masks and not physically distancing, yet being indoors."

Burgum said testing of asymptomatic people ages 20-40 is part of the path forward. He said the state has the testing capacity to do so and has the potential of acquiring more rapid-result tests.

The U.S. Department of Health and Human Services is sending 220,000 Abbott BinaxNOW COVID-19 rapid response tests to North Dakota, the White House announced Monday. The tests can diagnose coronavirus infection in as little as 15 minutes. Burgum has said the tests also could be key for visitation at long-term care facilities.

The first-term Republican governor seeking reelection has refrained from establishing a statewide mask mandate, instead urging people to wear masks out of personal responsibility and care for others. He and Birx wore masks during a press conference.

Burgum said he and Birx "have been in complete agreement since the beginning of this" and "believe that masks work."

"I think the question of how you get increased usage of masks goes back to people finding the why, why they do that," Burgum said.

Birx did not say whether she recommended that Burgum implement a mask mandate.

"Now in some situations, individual counties and individual mayors have created a matrix that has essentially resulted in a statewide mask mandate when you add them all together," Birx said, citing a "precipitously" lower viral load in wastewater within two weeks of the mayor of Baton Rouge, La., establishing a mask mandate.

Birx, Burgum and Sanford also met separately with tribal chairmen of the Spirit Lake Nation and the Mandan, Hidatsa and Arikara Nation.

Bakken said the roundtable discussion made evident that "we have a lot of work left to do" related to in-person K-12 education and business protocols.

He has not been in favor of a local mask mandate, seeing one as a patchwork for a "mobile" community and state.

"I don't know that a mandate would be effective unless it did come across the state," Bakken said.

The mayor urged mask compliance: "It needs to happen."

Moch said she hopes Birx’s visit hammers home the effectiveness of masks and social distancing, particularly as winter and cold and flu season arrive, and activities go indoors. Moch has pleaded with local leaders to establish a mask mandate, to no avail.

“I’m hoping that with (Birx’s) expertise … that people will see that we are in North Dakota and we may not have been impacted up to this point but we are at the point where we do need to take action,” Moch told reporters. “If she’s seeing that nationwide, that we are one of the areas that maybe is not taking this as seriously in our community, can we step it up and try to implement some of those measures.”

Birx acknowledged "COVID fatigue" could account for "a lot" of the low compliance with public health guidance.

She said she does not see an improvement in North Dakota’s trajectory without changes, such as greater mask use and physical distancing and no gatherings in the next two weeks.

“That means you won’t see improvement in your hospitalizations,” she said.

North Dakota's new daily admissions for hospitalizations this month have been twice that of September, Birx said. And September's were twice that of August, she added.

"At this rate what seems OK is going to continue to deteriorate, and so changing today will improve cases two weeks from now," she said.

A Bismarck man has started a mock fundraiser to pay for meals of state lawmakers, who will consider a bill to be reimbursed with taxpayer money for their meals.

A house was hit by numerous rounds in an early Thursday drive-by shooting on Niagara Drive, according to Bismarck police.

A competition that showcases the abilities of firefighters from the area and across the nation is coming to Bismarck in July.

A Bismarck woman who pleaded guilty in August 2020 to a firearms charge was sentenced Wednesday to two years on supervised release.

Montana-Dakota Utilities will begin work Monday on upgrades to a high-voltage transmission line in Bismarck.

A Valley City man who Bismarck police say was in possession of a weapon, ammunition and 14 drug options for his customers will stand trial in April.

Dr. Deborah Birx, White House Coronavirus Task Force coordinator, talks with Gov. Doug Burgum along with state and local government and medical leaders during a roundtable discussion on the campus of Bismarck State College on Monday.