Gale Sayers, Bears Hall of Fame running back, dies at 77

Tesla “Superchargers” have come online in four North Dakota cities, ensuring that drivers like Jason Mosser can cross the state without worrying that his car's battery will run out of power.

In early June, the Mandan resident decided to test out one of the first chargers to become operational in Fargo.

“I drove highway speed no problem, got there, charged up, and 30 to 40 minutes later I picked up supper and came home,” he said.

More than a month ago, such a trip would not have been possible. He would have had to stay in Fargo and charge up his Tesla overnight by using an adapter at a slower electric vehicle charging station, making his way back to Mandan the next morning.

Tesla’s decision to install Superchargers in North Dakota “is massively transformational” for travel, he said.

The new Superchargers span the Interstate 94 corridor in Dickinson, Bismarck, Jamestown and Fargo. Others went in recently along the interstate in neighboring Montana and Minnesota. In Bismarck, the eight chargers are located in the Pinehurst Square shopping center parking lot near T.J. Maxx.

North Dakota is the last state in the continental United States to get a Supercharger, which will work only with Teslas. Owners of other electric vehicles still don’t have a speedy option for charging in the state.

Mosser’s Tesla Model 3 can drive about 325 miles on a full charge in ideal conditions. He estimates that a Supercharger can give the vehicle enough power in 15 minutes to drive 150 miles.

He spoke about his experience using the new stations one morning last week while his car was hooked up to a Supercharger in Bismarck, during which time he racked up a $5.95 bill for the electricity he consumed. The charger gave him enough power to drive an additional 170 miles, and the cost he incurred appeared on the car’s screen next to the steering wheel.

“Through the magic of the internet, the charging system knows who owns the car and more importantly whose credit card to charge,” he said.

While some Tesla models can use Superchargers for free, Mosser has to pay with his vehicle. He said the cost ranges from 12 to 25 cents per kilowatt.

North Dakota Tesla owners are a tight-knit group, and they’ve already taken part in several events making use of the new stations.

On June 20, many owners drove to the Superchargers in Dickinson in the Prairie Hills Mall parking lot next to Qdoba for “a shindig” organized by the mall’s general manager to celebrate the stations’ startup, Mosser said.

“We had six states show up, three of which we didn’t know were coming,” Mosser said, adding that owners drove in from communities across North Dakota, South Dakota, Montana, Minnesota, Colorado and Arizona.

A few days later, a Tesla owner from Hettinger in the southwestern corner of the state invited some of the drivers to his community.

“We went down for Cruise Night,” Mosser said, adding that driving around the town of 1,200 residents that evening were classic cars, motorcycles and a number of Teslas.

On the way back, he stopped at one of the Superchargers in Dickinson for 20 minutes until his battery was almost full before continuing home to Mandan.

Mosser said he believes Minot and Pembina in northern North Dakota would be good locations for additional Superchagers to ensure Tesla drivers can cross between the United States and Canada without fear of running low on power.

As for other electric vehicles, North Dakota still lags behind nearly every state when it comes to installing charging infrastructure.

A number of Level 2 chargers that will work with any electric vehicle exist in cities across the state, but it takes about eight hours for them to provide a mostly full charge. Level 3 “DC fast chargers” will soon be installed in nine cities thanks to grant money North Dakota received through a settlement reached with Volkswagen over an emissions cheating scandal.

Those stations are in various stages of construction, said Keith Hinnenkamp, compliance program manager for the North Dakota Department of Environmental Quality. The department, which is distributing the settlement dollars, has not yet received any start-up notices or requests for reimbursement from entities that received grants.

The city of Bismarck is installing two stations, one at the Bismarck Airport and another at the Bismarck-Mandan Convention and Visitors Bureau off Burnt Boat Road near the Pinehurst shopping area.

The city is working through site and electrical engineering plans and anticipates ordering equipment for the stations next month, City Planner Will Hutchings said. It will take a while to arrive and install, but he hopes to have the chargers operating this fall.

While just 187 electric vehicles are registered in North Dakota, many people are curious about them.

As Mosser charged his Tesla last week in Bismarck, a woman in a minivan stopped her vehicle and rolled down the window to get his attention.

“Excuse me, just curious, how long to get a full charge?” she asked.

She and Mosser spoke for a few minutes about the car and the charging station. As she drove off, he shouted one final thought, suggesting she visit Tesla’s website to learn more about getting an electric vehicle.

A Friday fire at a Bismarck restaurant was contained to a deep fryer, according to the Bismarck Fire Department.

A man suspected of firing gunshots that struck a Bismarck apartment building is in custody and charged with three felonies, court records show.

A man arrested by Bismarck police for allegedly causing $18,000 in damage by spray painting graffiti on downtown businesses and a railroad bri…

A stabbing suspect expected to plead guilty got four chances to do so before the judge in the case ran out of patience and moved the case to trial.

The Bismarck Fire Department responded Wednesday to a 10-acre grass fire along the 2500 block of Hamilton Street in northeast Bismarck, just n…

Parents on Monday night raised concerns with the Bismarck School Board about coronavirus measures in public schools. 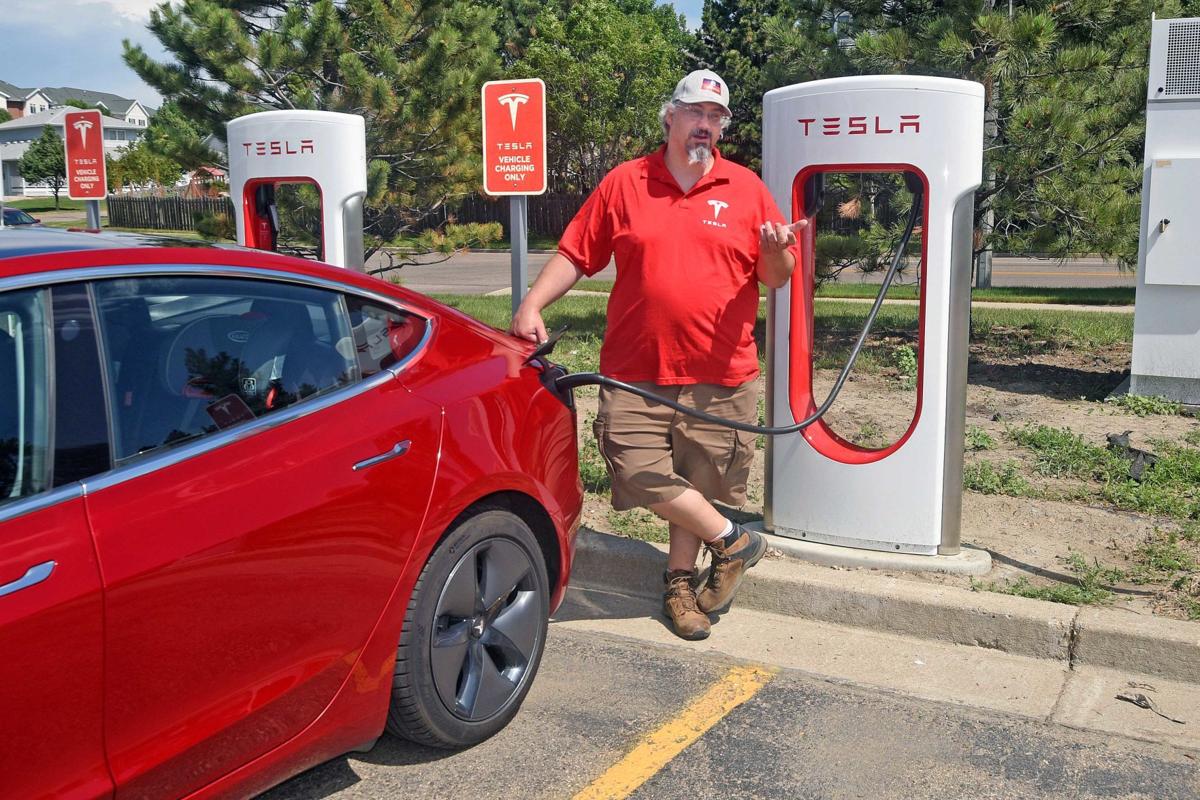 Jason Mosser, of Mandan, charges his Tesla Model 3 at the new Supercharger station near the T.J. Maxx store along Interstate Avenue in northwest Bismarck. 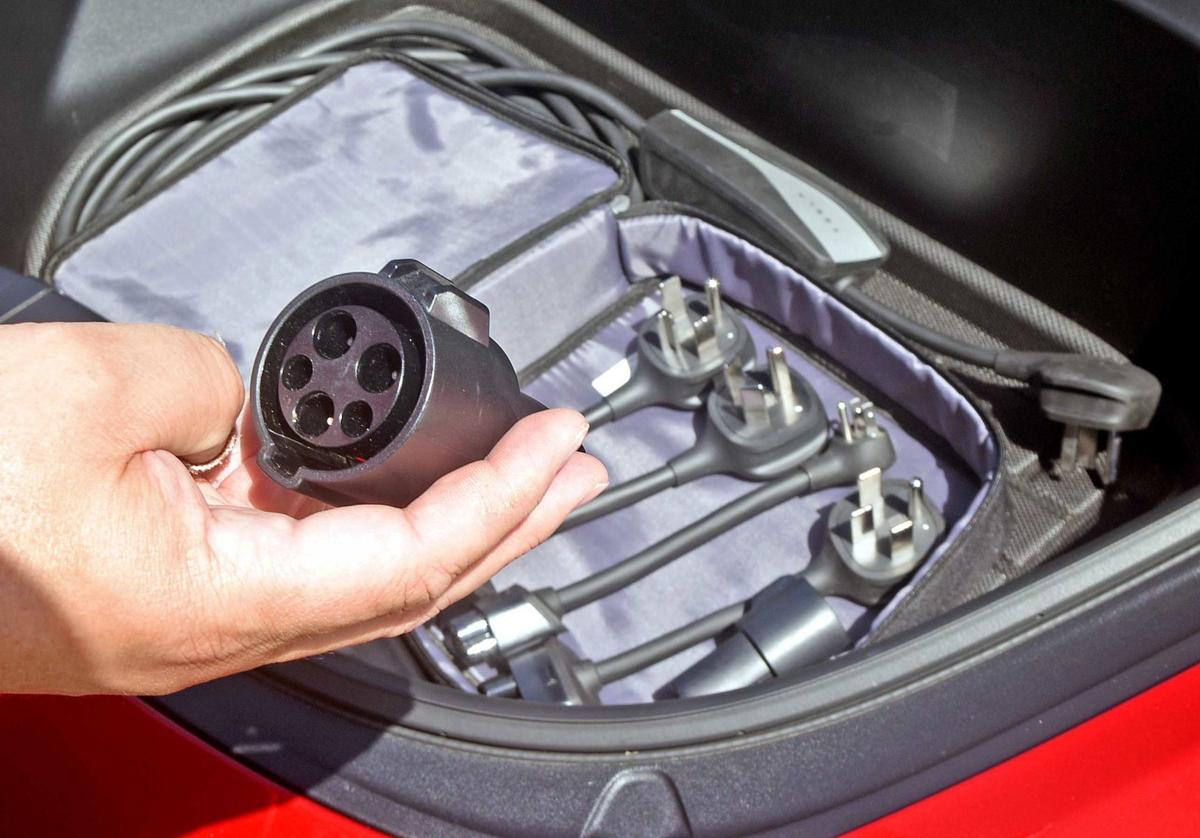