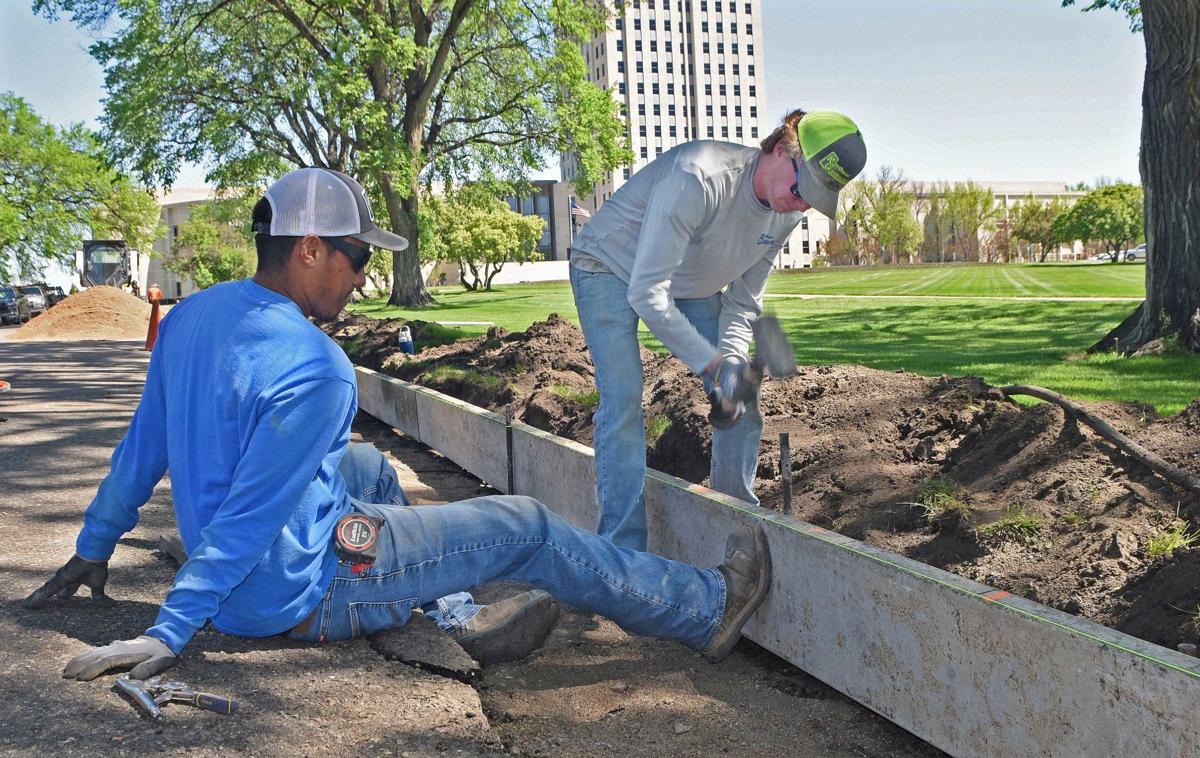 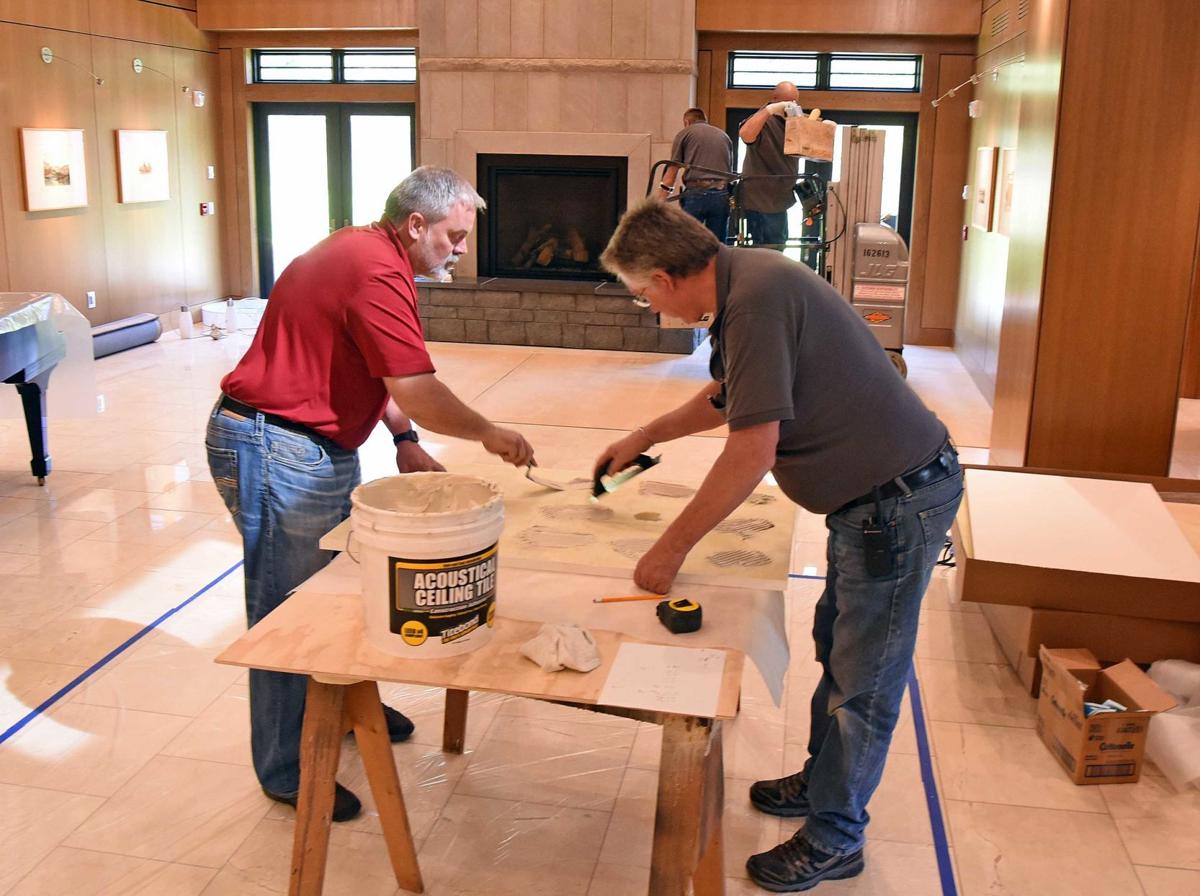 Tom Job, left, and Danni Kuntz, both with Capitol Facility Management, apply adhesive to a section of acoustical tile inside the North Dakota governor's residence on Thursday morning in Bismarck. Job said 84 of the sound-reducing acoustic tiles were being put on the room's ceiling.

About $380,000 in projects on the North Dakota Capitol grounds are set to wrap up early this summer, including a design to nip pervasive kitchen odors in the governor's residence.

Curb replacements around the Capitol mall and other concrete work near the building costing $230,000 are set to be complete later this month, Facility Management Director John Boyle said Wednesday.

The concrete work includes replacing a drive lane near the Capitol's west entry and sidewalk near the Judicial Wing. The work might go into mid-July if concrete is not readily available.

Set to wrap up by month's end are about $150,000 of improvements to the governor's residence to address noisy acoustics in the home's formal event space and poor ventilation of the lower-level kitchen.

Money for all of the projects comes from a state building fund.

The home's problems have been known for at least two years. Gov. Doug Burgum and first lady Kathryn Burgum moved into the $4.9 million, 13,700-square-foot residence in March 2018.

Boyle said the coronavirus pandemic and supply chain issues delayed the fixes. Acoustical panels to absorb bouncing noise from hard surfaces in the formal space arrived only a few weeks ago.

"That aroma comes into that space, so if you were to come in the front door for that event, be it a sit-down dinner, you would know what was for supper before anyone told you because you would smell it," Boyle said.

An engineer had to design a solution for the kitchen ventilation, which involves extracting the cooking air and bringing in and conditioning fresh air from outside. The fix involves installing a small mechanical unit on the home's north side.

Additionally, Facility Management has hired J2 Studio Architecture + Design, of Bismarck, for upgrades to the Capitol for compliance with standards of the Americans with Disabilities Act.

The 2021 Legislature budgeted $750,000 for the improvements throughout the 87-year-old building after a 2020 study found numerous areas out of compliance.

Facility Management also will work closely with a panel of top lawmakers on the upgrades, much of which include doors and audio/visual components of legislative committee rooms.

Some improvements will go beyond the ADA, such as a family bathroom, but that work might not come for "six months down the road," Boyle said.

"We want to make sure we have enough money to take care of all the ADA issues," he said. Fluctuating material cost estimates are a heavy factor, he added.

State lawmakers this session and last year heard from people with disabilities who have difficulty moving about the Capitol, especially in restrooms.

The bill for the upgrades directs the Office of Management and Budget to complete the improvements "as soon as possible."

Four lawyers have applied to fill a judgeship in the South Central Judicial District.

Authorities have issued an arrest warrant for a Grand Forks woman who told Bismarck police she swallowed 30 bags of drugs, and later left a lo…

A Wisconsin man found guilty of an infraction for using public grounds in Bismarck for commercial purposes is entitled to a jury trial. Eric Smith says the case is about free speech.

The city of Bismarck unveiled two fast charging stations for electric vehicles Wednesday: one at the Bismarck-Mandan Convention and Visitors Bureau and another at the airport.

The city of Bismarck will hold a public hearing on an ordinance that defines which agencies can tackle urban rodent control issues.

The Bismarck City Commission has approved a preliminary 2022 budget with a significant property tax hike.

Bismarck police have released the name of a motorcyclist who was killed in a weekend crash on North Washington Street.

Tom Job, left, and Danni Kuntz, both with Capitol Facility Management, apply adhesive to a section of acoustical tile inside the North Dakota governor's residence on Thursday morning in Bismarck. Job said 84 of the sound-reducing acoustic tiles were being put on the room's ceiling. 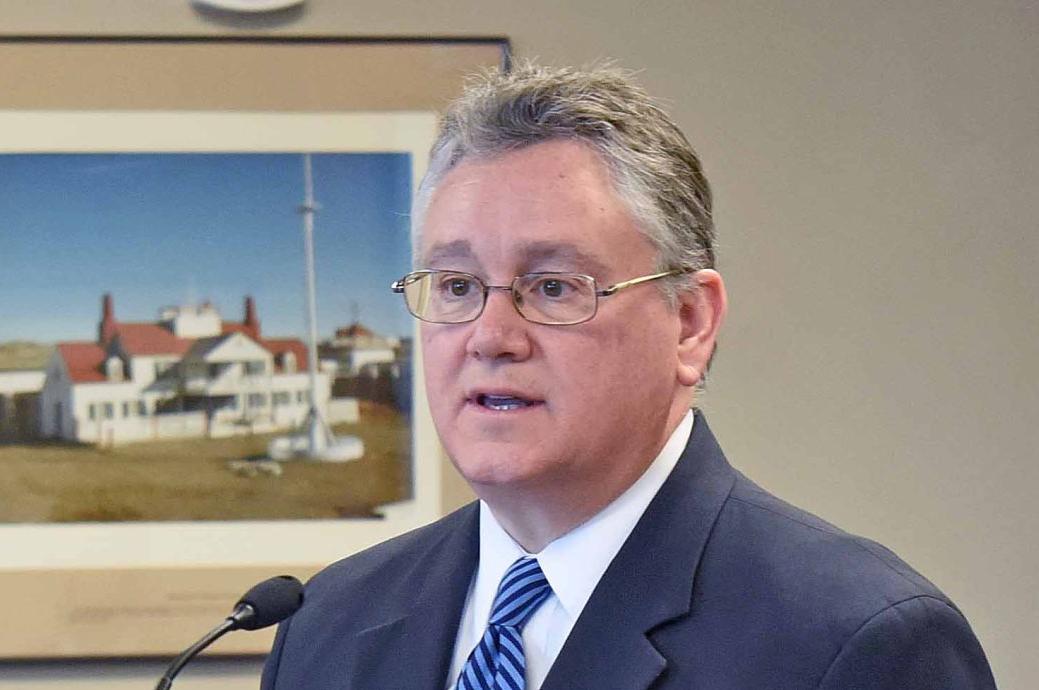