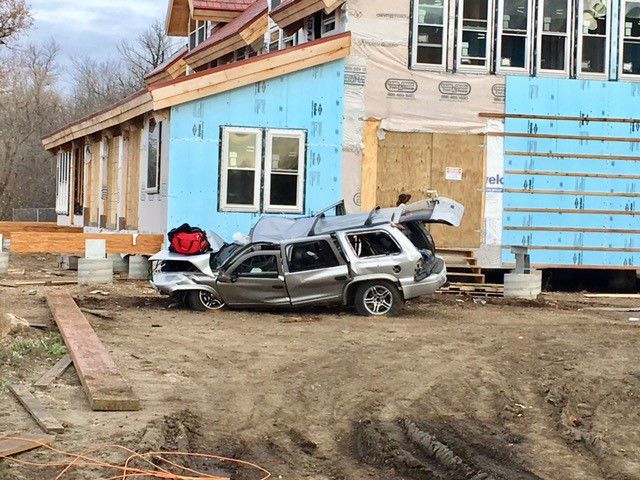 The crashed vehicle below the Grant Marsh Bridge and Interstate 94 on Nov. 2. 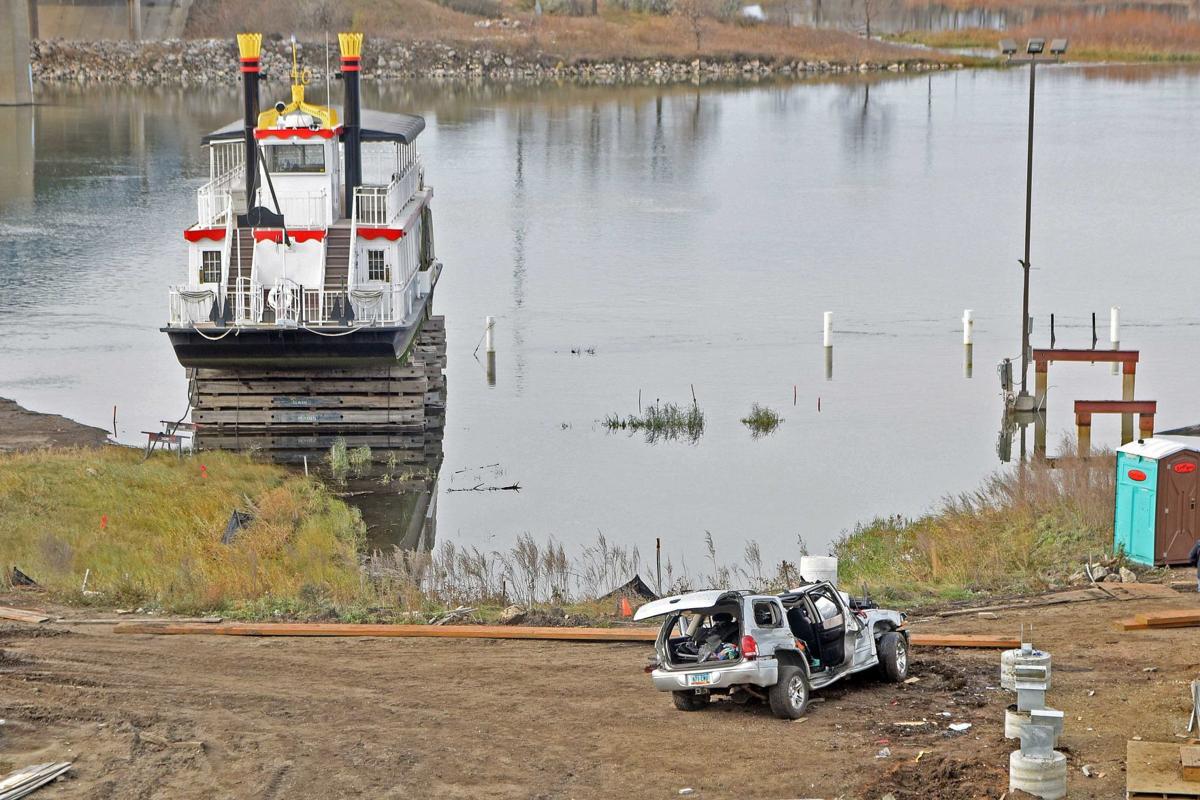 The 2003 Dodge Durango landed only feet from the Lewis & Clark Riverboat on the bank of the Missouri River in Bismarck.

The driver of a vehicle that left Interstate 94 and went airborne near the Grant Marsh Bridge on Nov. 2 now faces the possibility of five years in prison if authorities revoke his probation in Richland County.

Chozey Schumacher, 24, of Strasburg, was the driver of a westbound 2003 Dodge Durango that went into the north ditch, vaulted off an embankment and flew over River Road before coming to rest near the Lewis and Clark Riverboat Landing. He was cited for criminal vehicular injury, according to North Dakota Highway Patrol Trooper Jeremiah Bohn.

Richland County authorities booked Schumacher into jail on Nov. 27 and he was still in custody Thursday, Moen said. Schumacher's bail is $1,000 cash or surety bond. Schumacher's attorney, Don Krassin of Wahpeton, did not immediately return a call seeking comment about the case.

No formal charges had been filed in Burleigh County as of Thursday.

Crash investigators are “waiting for a lot of data and it takes time to process it,” Bohn said.

Preliminary numbers -- general math and trigonometry -- indicate the vehicle was traveling 62 mph when it left the embankment at a 10-degree launch angle. There was no evidence in the ditch of acceleration, braking or mechanical failure, the trooper said.

Another driver who had just merged into traffic from an on-ramp witnessed the accident, Bohn said, and two more witnesses reported the vehicle was traveling at a high rate of speed prior to the wreck.

“By all accounts, they said he just drove into the ditch,” Bohn said. “It doesn’t make a whole lot of sense.”

The vehicle came to rest some 200 feet away -- two-thirds the length of a football field -- and about 40 feet below -- four times the height of a basketball hoop. The SUV hit “the sweet spot,” Bohn said -- soft ground just south of a building being constructed near the boat landing.

The vehicle stopped about 20 feet from its impact point but before it reached the Missouri River. The vehicle’s front right corner hit the ground first, and its tires struck concrete footings south of the building. The two front support pillars on the driver’s side of the SUV collapsed.

“It’s rare to see that, especially opposite the impact point,” Bohn said.

Schumacher and a passenger in the vehicle, 43-year-old Stacey Shaw, of Bismarck, were taken to Bismarck hospitals after the Interstate 94 crash. Shaw was later transferred to a Fargo hospital. Bohn did not know the full extent of her injuries. A spokesman on Wednesday said there was not a patient by that name in the hospital.

The investigation won’t go into the same detail as is required when there is a fatality or when liability issues are raised, Bohn said. Investigations of accidents in which vehicles go airborne are “more common than you think,” the trooper said, though  added that he’d “never seen one that high.”

The Highway Patrol was assisted by Bismarck police and the Burleigh County Sheriff’s Department, and Metro Area Ambulance Services responded to the scene. Burleigh County Water Rescue conducted a precautionary search of the river, but authorities later determined the vehicle had just the two occupants.

Two people are injured, one of them critically, after an airborne crash near the Grant Marsh Bridge.

The crashed vehicle below the Grant Marsh Bridge and Interstate 94 on Nov. 2.

The 2003 Dodge Durango landed only feet from the Lewis & Clark Riverboat on the bank of the Missouri River in Bismarck.