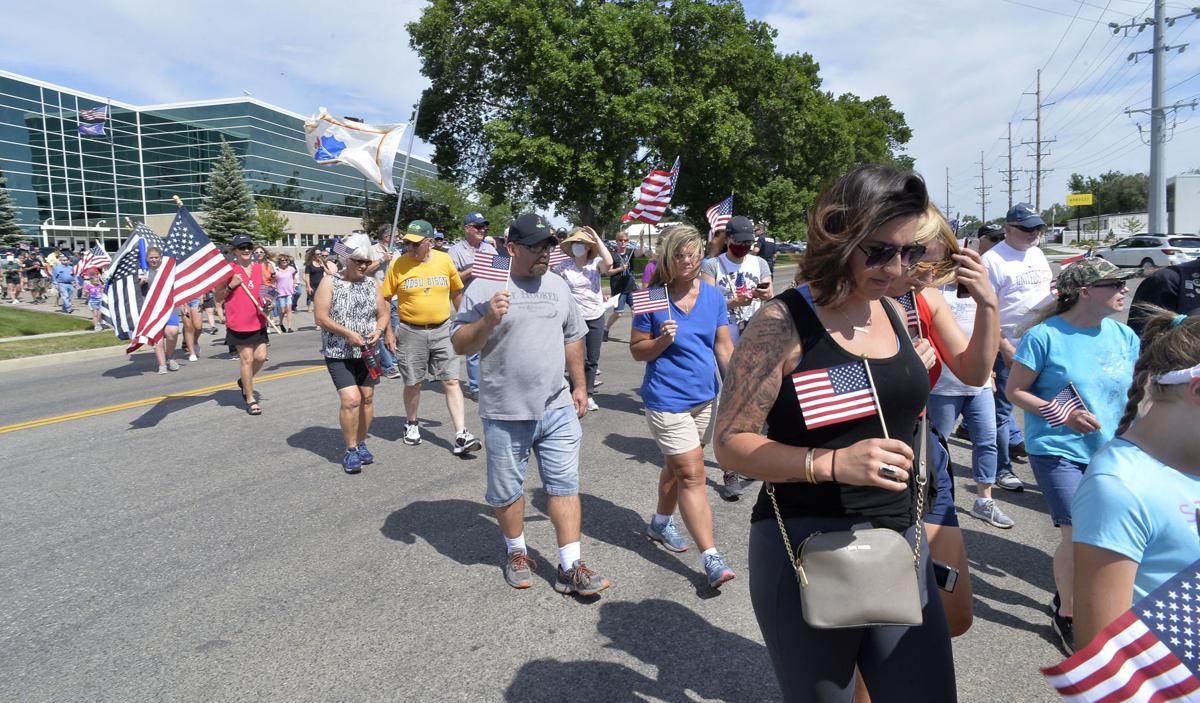 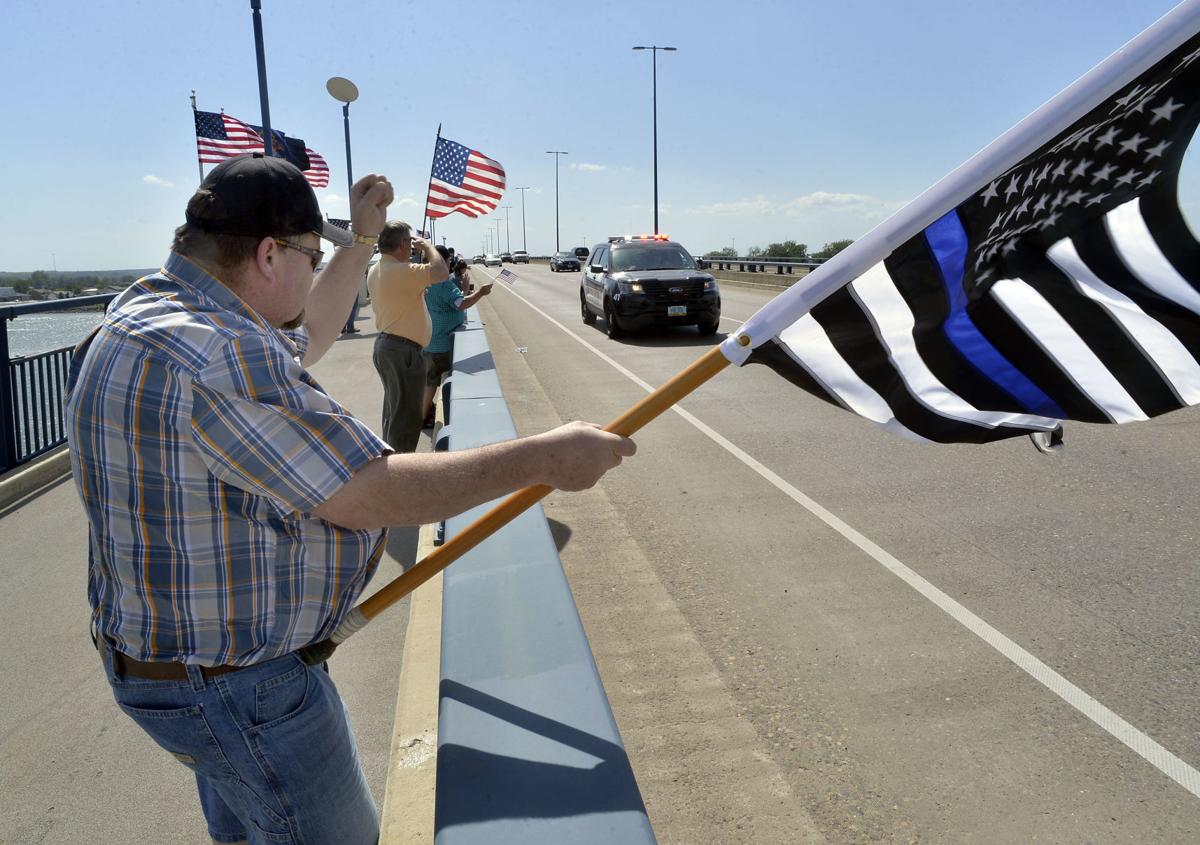 Sheldon Sime holds a thin blue line flag as a Bismarck Police car crosses Memorial Bridge on Sunday. Around 200 people marched across the bridge to honor Grand Forks officer Cody Holte who was killed in the line of duty.

About 200 people marched from Bismarck to the Liberty Memorial Bridge on Sunday to honor Grand Forks Police Officer Cody Holte, who was killed in the line of duty late last month.

The group started in the Bank of North Dakota parking lot where speakers talked about Holte, who was 29 years old when when he died on May 27 after being shot while officers served eviction papers at an apartment in Grand Forks. He left behind a wife and an infant son.

The participants prayed, then walked to the bridge that crosses the Missouri River between Bismarck and Mandan. They spread out along the sidewalk while officers from local law enforcement agencies and the North Dakota Highway Patrol drove across.

"We ended up forming a convoy across the bridge during the moment of silence," said Sgt. Noah Lindelow with the Bismarck Police Department.

Lindelow said it was meaningful to see residents here come out to support an officer who wasn't from their own community.

"We know, doing this job day to day, this community supports us," he said.

Mandan resident Sheldon Sime was among the participants.

"Cops get such a bad rap, but they're not all bad," he said. "They need to know that the community believes in them."

Grand Forks authorities have charged 41-year-old Grand Forks resident Salamah Pendleton with two counts of murder, as well as with other crimes. They allege that he fatally shot both Holte and Lola Moore and that he shot another police officer who survived.

Will Kincaid contributed to this report.

Bismarck woman dies in I-94 crash

A Bismarck woman died from injuries sustained in a two-vehicle crash about 9 a.m. Saturday on Interstate 94 east of Bismarck, according to inf…

A $250,000 state building fund appropriation will pay for the improvements.

An Elgin man who pleaded guilty to two sex crimes in Grant County was sentenced Friday to 14 years in prison, court documents show.

Bismarck Police are investigating a shooting that took place early Wednesday and sent a victim to the hospital with a gunshot wound.

One additional death related to COVID-19 and 37 new cases of the coronavirus disease have been confirmed in North Dakota.

A Tuesday morning thunderstorm dropped 1.46 inches of rain on Bismarck and caused some power outages in the city.

The Bismarck School Board has approved purchase agreements for land on which two elementary schools will be built.

A string of thunderstorms on Sunday brought rain and some severe weather to central North Dakota, and more of the same could be in store this … 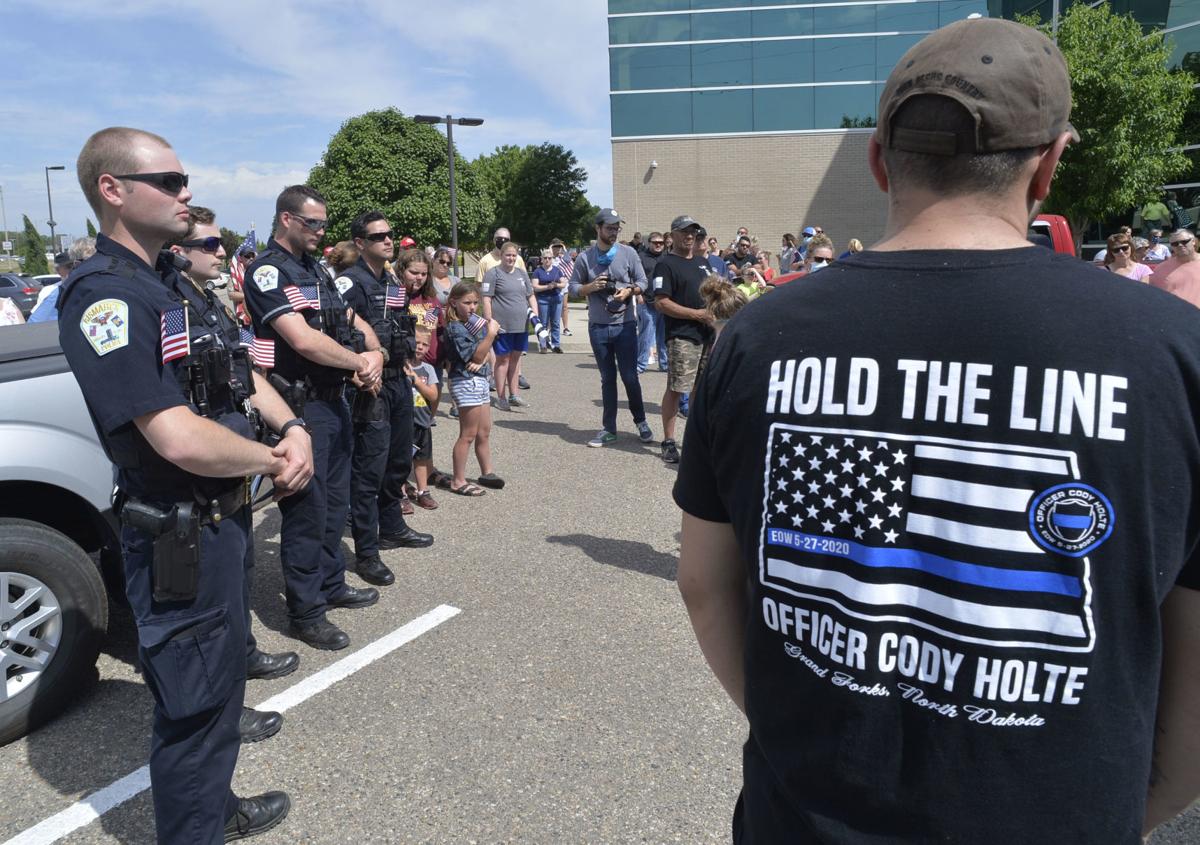 Members of the Bismarck Police Department participate in an event honoring slain Officer Cody Holte of the Grand Forks Police Department. About 200 people took part in a march across Bismarck's Memorial Bridge on Sunday.

Sheldon Sime holds a thin blue line flag as a Bismarck Police car crosses Memorial Bridge on Sunday. Around 200 people marched across the bridge to honor Grand Forks officer Cody Holte who was killed in the line of duty.