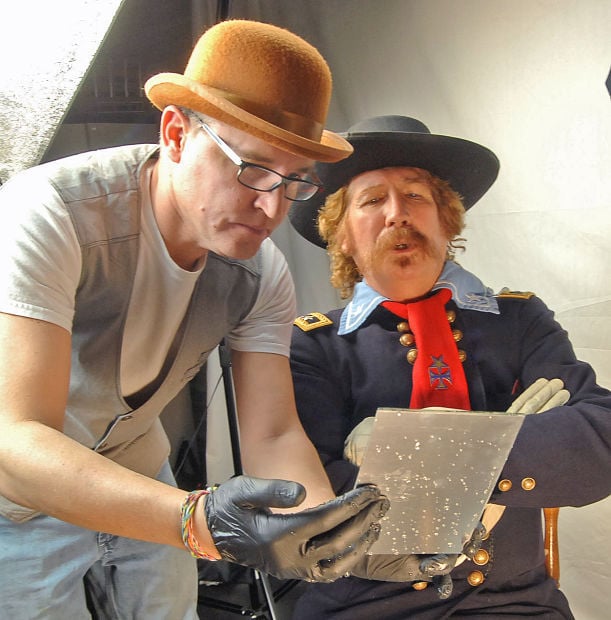 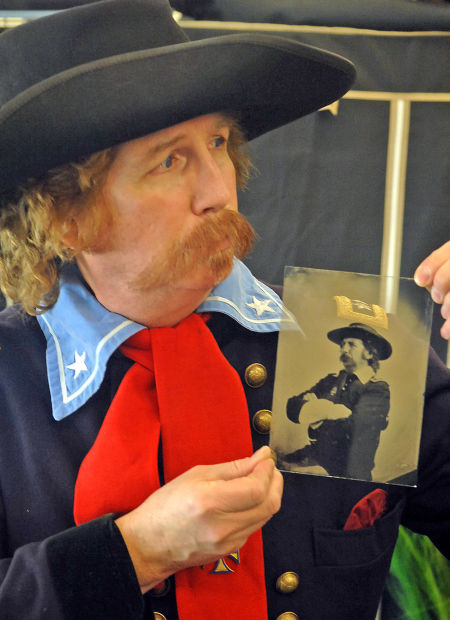 TOM STROMME/Tribune Steve Alexander holds a glass plate bearing his image in the same pose captured of then-Gen. George Custer in May 1865. Alexander, a well known Custer re-enactor, was at photographer Shane Balkowitsch's studio on Thursday.

On his 174th birthday, Lt. Col. George Custer lived again and commemorated the event by — what else? — posing for a photo.

Custer reenactor Steve Alexander posed in the same position for close to an hour Thursday while Shane Balkowitsch took three plate images of him using an old photography process.

Alexander and Balkowitsch were attempting to recreate a particular well-known photo of Custer, taken in 1865, that shows him in profile, wearing his full military uniform, with his arms crossed. He held a battlefield rank of general at the time.

The process of photography used to take that photo is called wet plate and it is the process Balkowitsch used Thursday.

With wet plate photography, also called the collodion process, the photographer uses glass plates coated in chemicals and then silver nitrate exposed to light to create the images. The result is a very detailed image carved into silver on a glass plate.

After three plates, Balkowitsch and Alexander were pretty pleased with the results. Balkowitsch said he thought it was going to take six to eight plates to get so close to the original.

The devil is in the details, as they say. Balkowitsch spent a lot of time arranging Alexander — tilting his head, re-tying the tie, positioning the collar and switching hats — to get the image as close to the original as possible.

“It’s all about the details, the research,” Balkowitsch said.

This is how Alexander plays Custer. He makes it his business to know as much about the man as possible — people always try to stump him with obscure facts and questions.

Within just a few questions, however, he has them convinced, he said, and they are asking questions as if he’s Custer.

No detail is too small, even down to Custer’s West Point ring. It all adds nuance to the character, Alexander said, as will having such a specific and detailed photograph.

The idea of this photo recreation came when a Facebook friend of Balkowitsch’s posted a photo of Alexander posing at an event. Balkowitsch and Alexander starting talking and decided to pursue the idea of making this image.

Balkowitsch only started working with this type of photography about a year ago. He wasn’t a photographer before then.

“My first camera was this camera we’re using today,” he said.

Balkowitsch said he’s hoping this image turns out to capture Alexander’s Custer as much as the original captured Custer himself.

“We’re just trying to do the image as much justice as possible,” he said.

TOM STROMME/Tribune Steve Alexander holds a glass plate bearing his image in the same pose captured of then-Gen. George Custer in May 1865. Alexander, a well known Custer re-enactor, was at photographer Shane Balkowitsch's studio on Thursday.