A Detroit-area man is scheduled for trial next month to face charges from an August arrest in which Bismarck police said he and a co-defendant were in possession of 1,200 illegal pills and $5,000 cash.

Dennis Brown, 28, of Taylor, Mich., on Friday pleaded not guilty to drug and drug conspiracy charges.

Police conducting a traffic stop on Aug. 2 detected the odor of alcohol and marijuana, Police Sgt. Delmer Gallagher said during Brown’s preliminary hearing. Some of the oxycodone pills fell to the ground when Brown’s co-defendant, Zaire Goodman of Romulus, Mich., stepped out of the car. About 960 pills were found in a vitamin bottle in the glove box, and Brown had $4,500 cash in his pocket. More pills were found in her purse and around the front seat of the car, the sergeant said.

Two Detroit-area residents face charges in Bismarck after being arrested with what police say were more than 1,200 oxycodone pills and $5,000 … 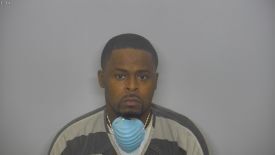