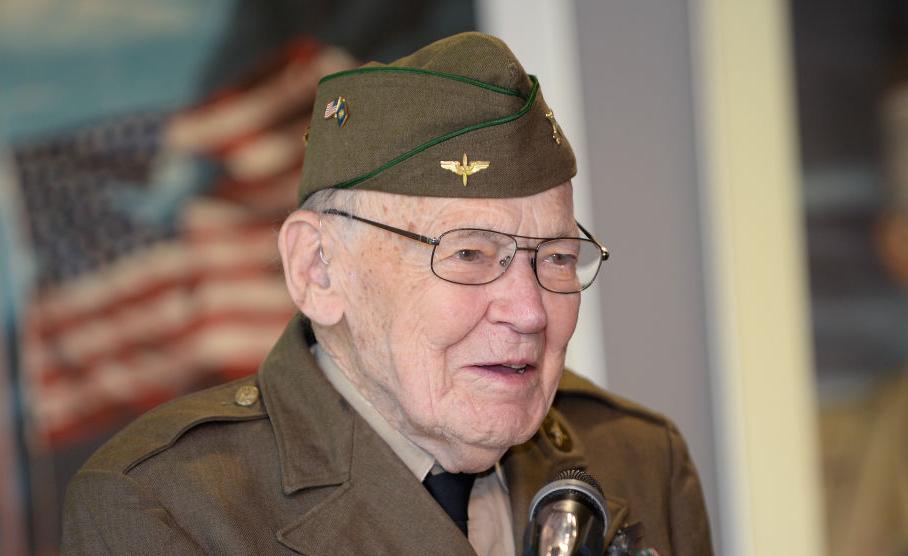 World War II veteran Herbert Wilson talks about his experience during the kickoff to the World War II 70th anniversary celebration at the North Dakota Heritage Center in 2015. 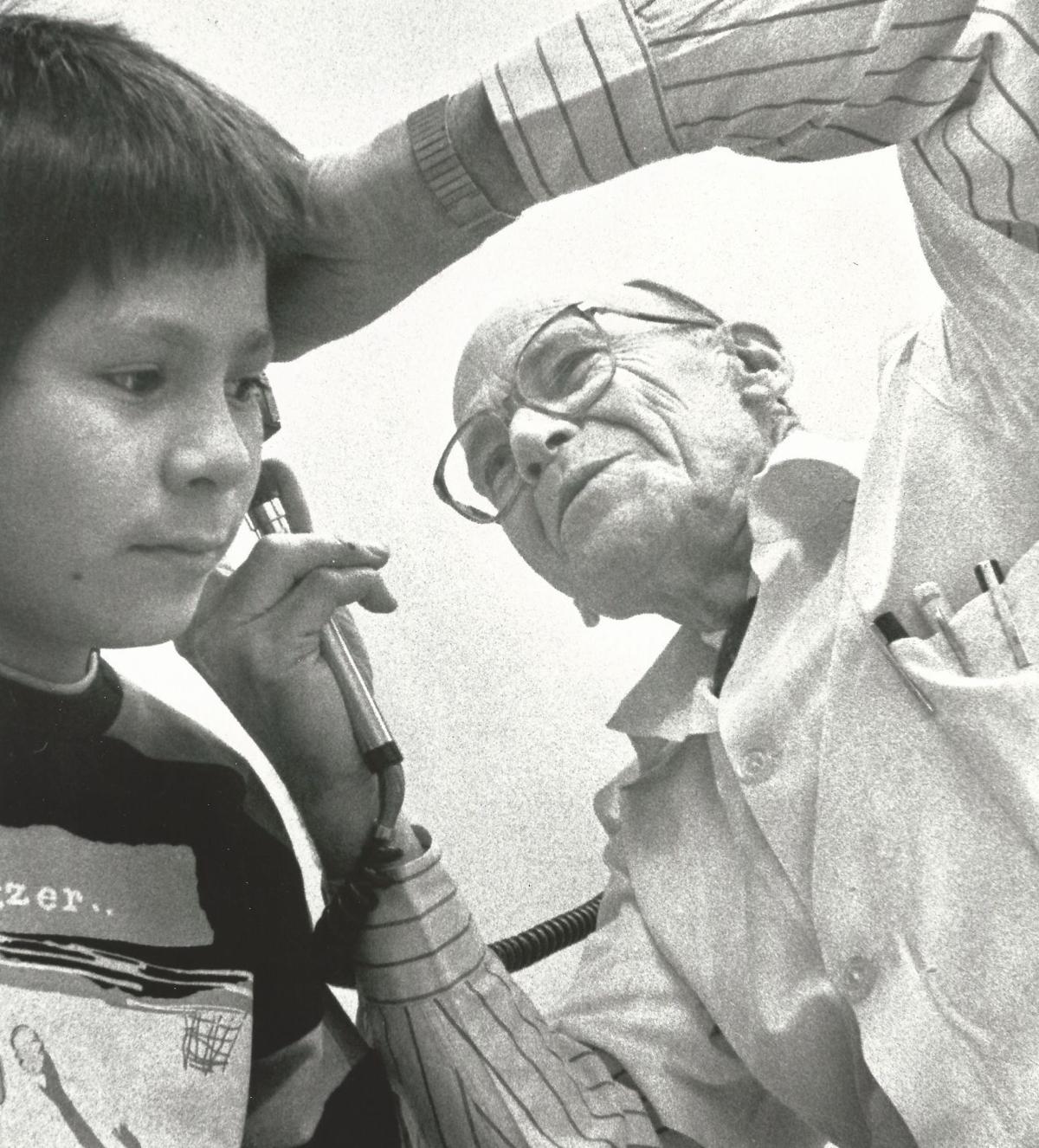 Dr. Herbert Wilson, who began serving the Fort Berthold Reservation one year before the bottomlands were flooded, helps a patient at the Minne-Tohe Health Center west of New Town in this December 1991 photo.

A World War II veteran revered for his community involvement and decades as a doctor on the Fort Berthold Reservation has died.

Dr. Herbert Wilson, of Bismarck, died Monday following a stroke. He was 99. He was a doctor on the Fort Berthold Reservation in western North Dakota for 43 years before retiring to Bismarck in 1995 with his wife, Lilian. They were married 75 years and had six children.

Wilson was known for being active, even when he could no longer drive. Daughter Fran Mack isn't sure of how else to describe her father other than "busy."

Herbert and Lilian met in 1944 at an American Red Cross Club party amid World War II, when he was assigned to the 506th Bombardment Squadron and she was a corporal of the Women's Auxiliary Air Force, the female auxiliary of the Royal Air Force. He was involved in 31 bombing missions.

“Somehow, I was not afraid and somehow came through it,” Wilson told the Tribune in 2016, quoting a motto: “Freedom means happiness and courage means freedom. Do not trouble me unduly about the dangers of war.”

He and Lilian married in 1945 on the Isle of Wight in the English Channel.

Wilson, a Bethel, Vt., native, graduated from Harvard and Tufts Medical School on the GI Bill and worked two years for the U.S. Public Health Service. His second year he transferred to the Indian Health Service at Elbowoods, where he spent a year before the rising reservoir of the Garrison Dam flooded the town. He established himself in New Town, where he doctored for 42 years.

"He always just enjoyed other people, and he seemed to have a really good, intelligent insight on how to manage social problems," said Mack, describing her father as a humanitarian.

Wilson was involved in several activities and organizations, from Kiwanis to multiple churches' Bible studies. He greeted visitors to the North Dakota Capitol and the Heritage Center, and helped advocacy groups for the disadvantaged, such as the homeless.

Religion and patriotism were important elements in his life, Mack said. He also enjoyed writing, wrote his own memoir and belonged to a writing club.

When he could no longer drive due to his age, Mack and her sisters realized in driving him around how involved their father was.

"He just was so active and didn't want to stop these kinds of things," Mack said.

Wilson was a revered figure among the people of the Fort Berthold Reservation, according to Mandan, Hidatsa and Arikara Nation Chairman Mark Fox.

His dedication to healing and respect for others and native culture made him "one in a million," Fox said.

"I sure wish we had about 10 more of him right now today, and all the miracles we could do," said Fox, who also respected Wilson for his military service and community involvements.

Nurse Glad Meiers met Wilson in the 1960s and worked with him for at least 20 years in New Town and Stanley. Wilson didn’t charge nurses who made an office visit to him.

“He wouldn’t take money from us,” she said.

Wilson treated nursing home residents to movies on Thursday nights and to road trips if he thought they needed to get out.

Former Governors' Mansion Site Supervisor Johnathan Campbell recalls his introduction to Wilson being about 15 years ago, when Wilson parked his car and sprinted across the street to St. George's Episcopal Memorial Church.

"I found out a little bit later that he actually attended three churches, and to get there on time he had to run," Campbell said.

Wilson was a board member of the Society for the Preservation of the Former Governors' Mansion, and helped organized the ice cream social and holiday open houses.

Wilson's wife and children held a small family service on the North Dakota Capitol grounds Tuesday morning. A funeral will be held after the coronavirus pandemic wanes.

A Bismarck man was arrested early Wednesday for allegedly pointing a gun at two people and assaulting one of them, according to a police affidavit.

Thousands of state employees have been teleworking amid the coronavirus pandemic, and now state agencies are eyeing changes to their office footprints for potential lease savings.

A Mandaree man wanted for attempted murder in Bismarck has been arrested without incident, according to the U.S. Marshals Service.

A federal judge has dismissed a civil lawsuit filed by a man who alleged two Bismarck police officers used excessive force when they shot him in 2016.

Usage of local libraries' electronic and digital resources surged amid the coronavirus pandemic as their facilities closed to onsite patrons.

Fire breaks out at duplex near downtown Bismarck

Firefighters responded to a fire late Friday at a duplex along the west edge of downtown Bismarck.

A fire at a 12-unit apartment building in northwest Bismarck Friday afternoon has displaced all the residents living there, according to the Bismarck Fire Department.

World War II veteran Herbert Wilson talks about his experience during the kickoff to the World War II 70th anniversary celebration at the North Dakota Heritage Center in 2015.

Dr. Herbert Wilson, who began serving the Fort Berthold Reservation one year before the bottomlands were flooded, helps a patient at the Minne-Tohe Health Center west of New Town in this December 1991 photo.