Hemp is gaining traction among farmers in North Dakota, and where state officials are seeing the most interest recently is in growing hemp for cannabidiol, or CBD.

CBD, which many believe has healing properties, is a substance derived from the hemp plant, a member of the cannabis genus. Unlike its cousin marijuana, hemp and its products cannot get you high.

The passage of the 2018 Farm Bill legalized hemp nationwide and removed its status as a Schedule 1 or controlled drug. Now, hemp-derived CBD is cropping up seemingly everywhere: grocery stores, health food stores — even gas stations.

Farmers in North Dakota are lining up to take part in a booming CBD market. Last week, the state Department of Agriculture held its first informational meeting for current and prospective hemp farmers looking to produce CBD. The meeting, called "CBD 101," drew about 70 attendees.

Henry Dockter, who owns a small family farm in Zeeland, was one of them. In May, Dockter planted 2 acres of hemp, which he plans to process for CBD.

"With agriculture products not being stable, this was kind of my getaway," or hobby, said Dockter, who has been farming alfalfa, corn and soybeans since 1988.

Dockter suffered a chemical burn 30 years ago and has had subsequent lung issues, so he first learned about the use of CBD to treat health issues. He said he plans to continue to read up on different ailments and which types of hemp seeds can help.

"It’s going good. It’s all kind of research, like (this informational session)," he said.

North Dakota has 64 licensed hemp growers this year who planned to plant nearly 4,000 acres, according to Goehring. This is double the number of growers in 2017, the first year hemp growing was permitted under the state's Industrial Hemp Pilot Program.

In response to the passage of the 2018 Farm Bill, the North Dakota Legislature unanimously passed a bill to align state law on hemp with federal law.

Because the U.S. Department of Agriculture has not finalized regulations for hemp, North Dakota is still operating under its Industrial Hemp Pilot Program, which requires applicants to describe what research they plan to do with the crop.

Next year, the application process will go away and applicants will be required to pass a background check, list where they plan to grow and agree to random sampling.

The licensing fee was changed from $25 an acre to a flat fee of no more than $350 based on the number of acres, effectively lowering the fee. Goehring said a drop in the fee could encourage more farmers to apply.

Last week's informational meeting on growing hemp for CBD included an overview of the state law, as well as hemp sustainability, diseases and pests. Goehring said officials might hold additional meetings in the future if there is interest.

"Anytime we see a need we're going to try to respond to that," he said.

While Goehring said the department isn't exactly being flooded with calls about growing hemp, he is getting more inquiries from his colleagues in other states about starting a hemp program.

Unlike North Dakota, in some states hemp is not recognized as a legitimate crop, despite it being legal at the federal level.

One state Goehring has been called to is South Dakota. Last year, South Dakota Gov. Kristi Noem vetoed legislation legalizing hemp this year, stating it would be "opening the door" to legalized marijuana in the state.

Goehring said he was invited last week to talk during a public meeting with South Dakota legislators and farm groups "to dispel myths" but was unable to attend.

"Some people just associate (hemp) with marijuana, and there's a big difference," he said.

Goehring is cautious to talk about the future of hemp in North Dakota but says he believes farmers have "greater opportunities" to make money in growing hemp for CBD.

"If we're going to grow, I would see it related to that," Goehring said.

For more than 20 years, North Dakota Rep. David Monson, R-Osnabrock, has tried to pass legislation to regulate the production of hemp in the state. 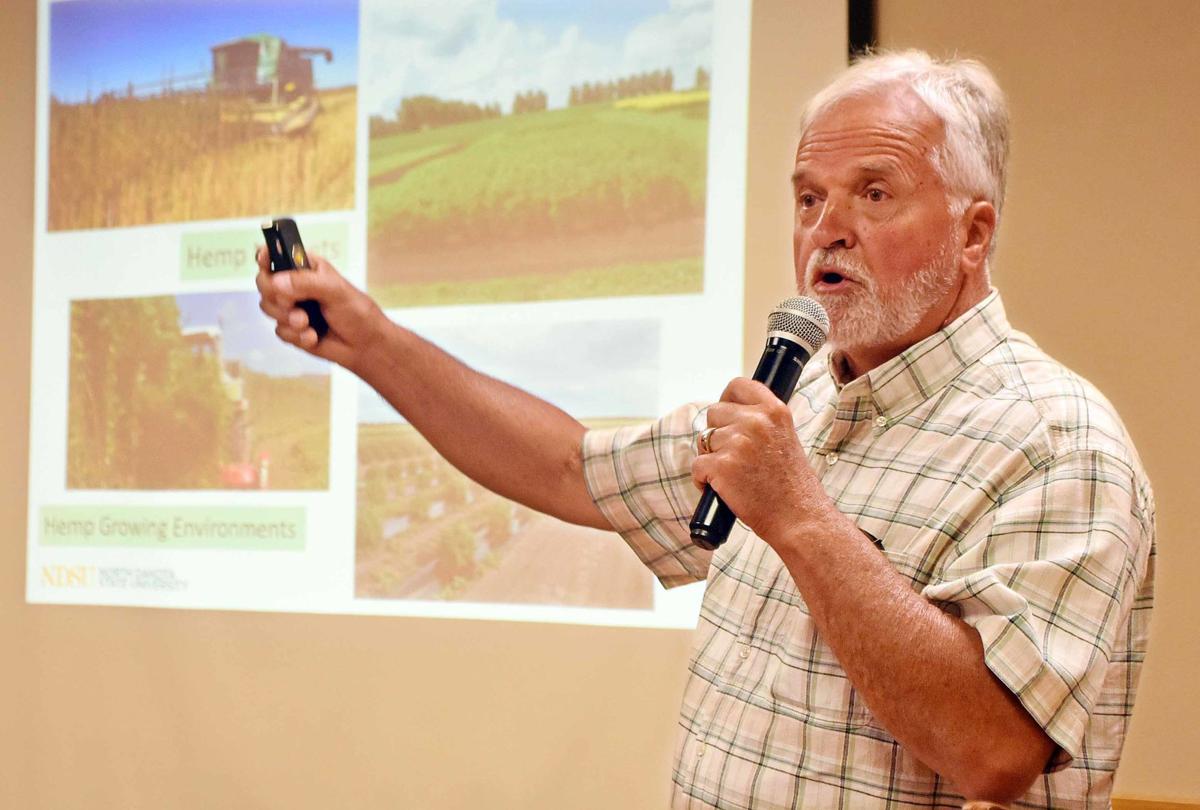 Burton Johnson with North Dakota State University in Fargo speaks Friday afternoon about pests and diseases facing hemp farmers. He spoke at an event in Bismarck that the state Agriculture Department hosted on growing, harvesting and processing CBD hemp. 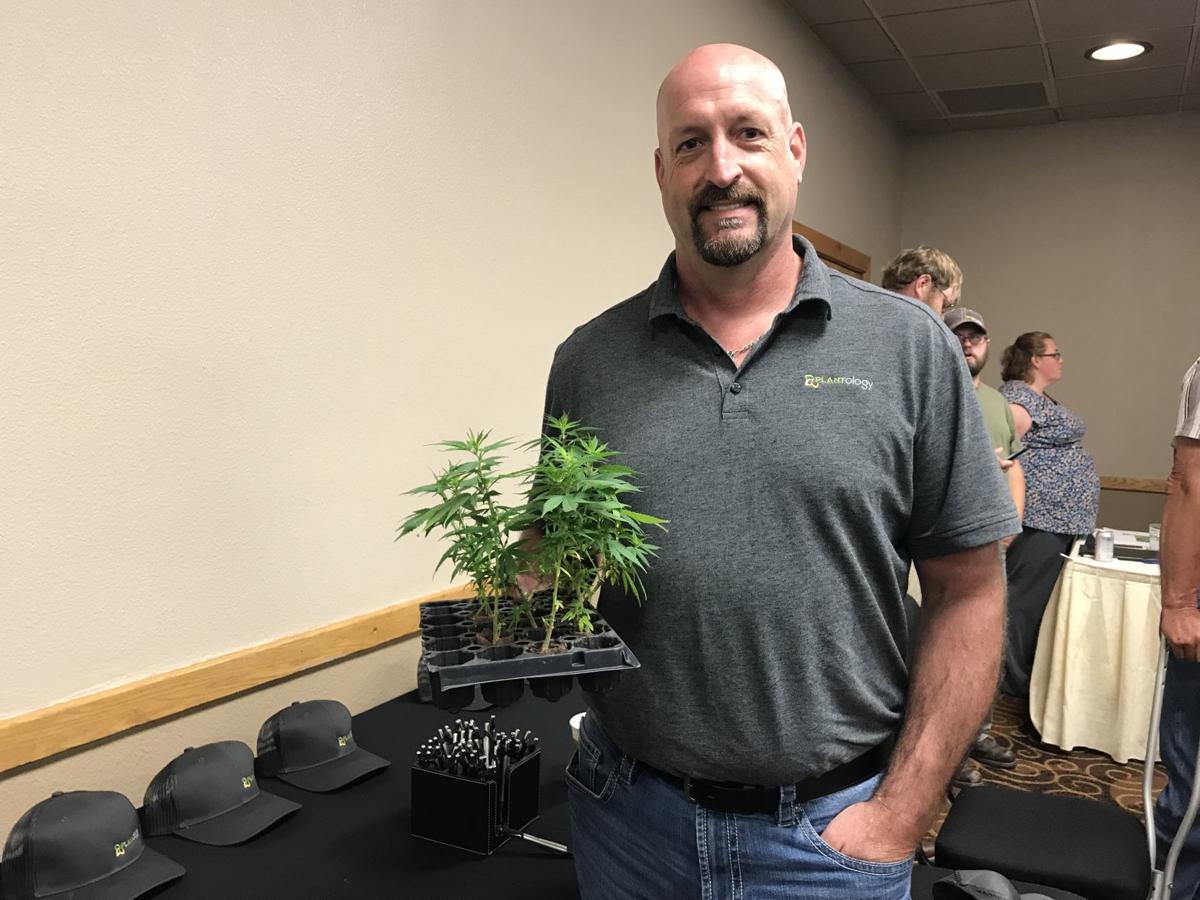 J.D. Shotwell, of Fargo, attended the North Dakota Department of Agriculture's "CBD 101" meeting last week for prospective and current hemp farmers. He brought a few "hemp plant clones" that his organization, Plantology, grew this year. Plantology has 16 acres of hemp plants, which will be processed for CBD.