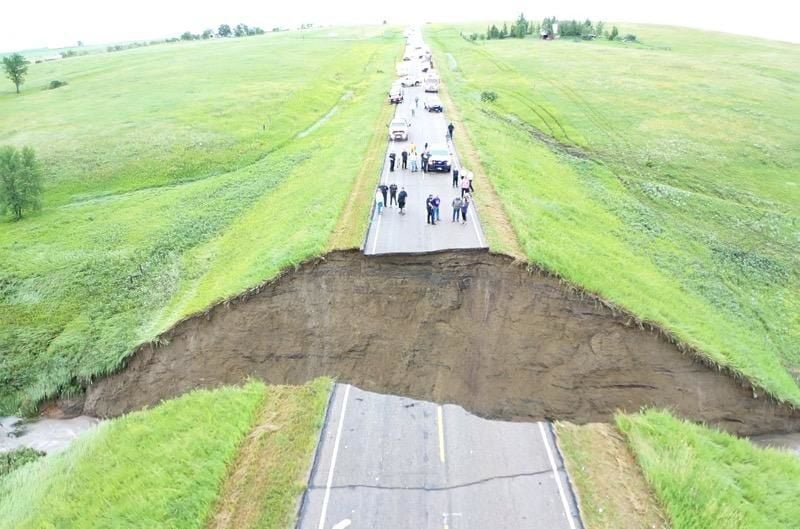 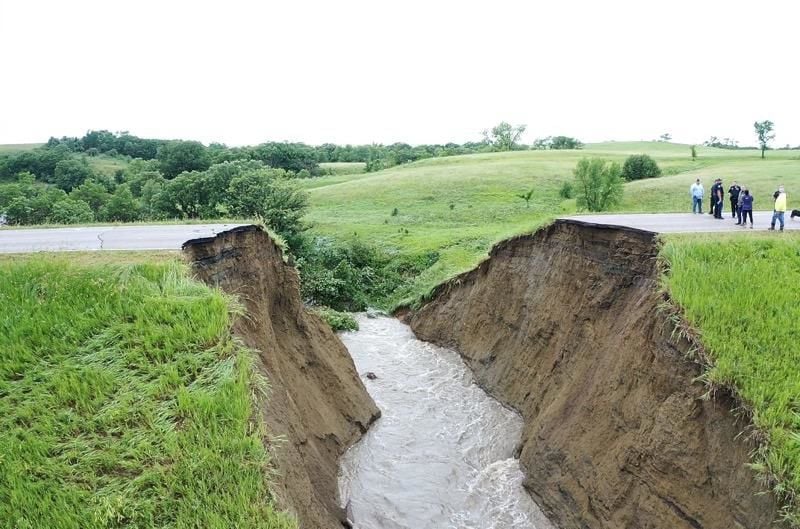 The families of two people who died a year ago in a road washout on the Standing Rock Reservation are seeking unspecified monetary damages from the federal Bureau of Indian Affairs and better maintenance of roads in Indian Country.

The bureau knew for several years that a culvert on BIA Road 3 was unsafe, and the agency’s failure to replace it led to the deaths of two people when the culvert and road above it washed out in July 2019, claims filed Wednesday by the victims’ families allege.

The Tribune reached out to the BIA on Wednesday for comment.

Bismarck attorney Tim Purdon filed the administrative claims Wednesday on behalf of the families of Trudy Peterson, 60, and Jim Vander Wal, 65, both of Mobridge, S.D., who died in the chasm left behind when the culvert and road washed away.

Purdon also represents the drivers of two other vehicles -- one an empty Sitting Bull College bus -- who had to be rescued from the washout. Steven Willard and Evan Thompson were flown to Bismarck hospitals for treatment of what Purdon said were permanent injuries.

All four people who drove into the washout were traveling to jobs on the reservation or driving the road as part of their jobs in the dark, early morning hours of July 9, 2019.

Vander Wal was headed south from Bismarck with a load of U.S. mail destined for Mobridge. Peterson was on her way to Fort Yates from Mobridge to start a shift as a nurse at the Sanford dialysis facility.

That morning, Jade Mound, Peterson’s daughter, started putting together pieces of information coming to her from phone calls and texts. Peterson was late for work, and her GPS location on Mound's phone was stationary and hadn’t updated since 4:39 a.m. Later, friends started texting Mound that the road was washed out. Mound sent a screenshot of Peterson’s GPS location to a friend, who confirmed it was the site of the washout.

“I don’t want anyone else to have to go through what my family has gone through,” Mound told the Tribune. “There is absolutely no reason that the BIA roads should be in the condition they’re in.”

Flooding from 7 inches of rain during the night of July 8 and early morning of July 9 scoured the dirt that held the culvert under BIA Road 3, known locally as the Kenel Road. The culvert was bowing but not considered dangerous and had been identified for replacement seven years earlier, tribal Planning and Transportation Director Ron His Horse Is Thunder said at the time.

A claim against the federal government doesn’t start with a lawsuit, Purdon said. The claims are made under the Federal Tort Claims Act, which gives the BIA six months to respond. The bureau could deny or agree to the claims, negotiate a settlement, or not answer them at all, the attorney said. If the bureau denies the claims or if the claims aren’t resolved in six months, Purdon can then file a lawsuit in federal court.

The BIA “has turned a blind eye to the failing highway infrastructure” in Indian Country for too long, Purdon said in a statement.

“The BIA’s failure to provide safe highways has taken a heavy toll over the decades and has now resulted in this tragic incident that will forever impact these four families,” he said.

About 565 vehicles traveled the road daily before the washout, according to estimates from the North Dakota Department of Transportation. A double-cell, concrete box culvert was installed and the road reopened in December. Standing Rock tribal leaders organized a ceremony in honor of those who died and were injured, which Mound said was a step in her healing process. The action against the BIA is another step in that process “in a way,” she said.

“I want something good to come out of my mom’s death,” she said. “If it means other people’s lives are saved in the future, then yes, most definitely.”

The culvert that washed out from under a highway on the Standing Rock Reservation on July 9, killing two South Dakota residents when they drov…

Efforts to repair a washed-out section of Standing Rock Reservation highway have been hampered by the availability of materials and delays in getting a new culvert to replace the one claimed by heavy rains in July.

Work is nearly complete on the section of BIA road on the Standing Rock Reservation that washed out in July, causing the deaths of two South Dakota people. The road is expected to reopen Dec. 20, a tribal official says.

The reopening of a washed-out BIA road was marked by a Thursday ceremony for two victims who died and two who were rescued.