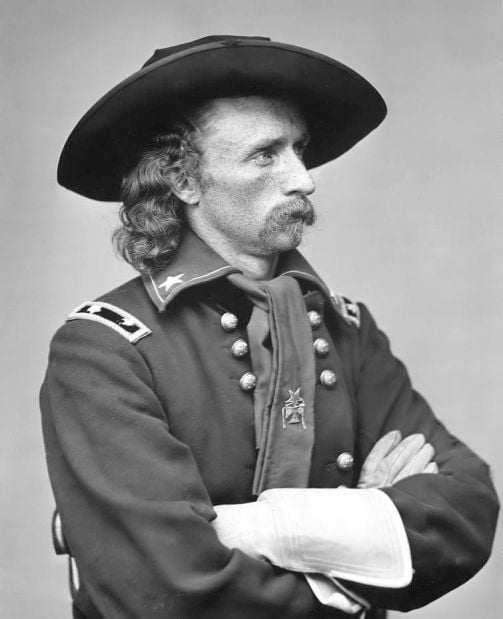 This photo of Lt. Col. George Custer was taken in 1865. Shane Balkowitsch and Custer re-enactor Steve Alexander are planing to recreate the photograph Dec. 5 using the process of the time. 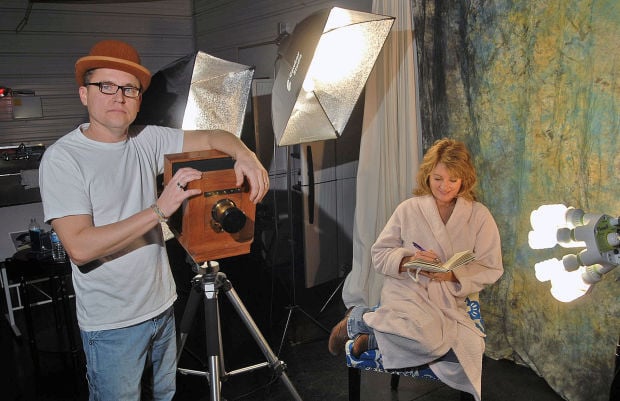 Shane Balkowitsch poses with the camera he uses to take wet plate photographs, or ambrotypes. Seated at right is Rose Klein of Minot, whom Balkowitsch was photographing on Friday, Nov. 22, 2013. 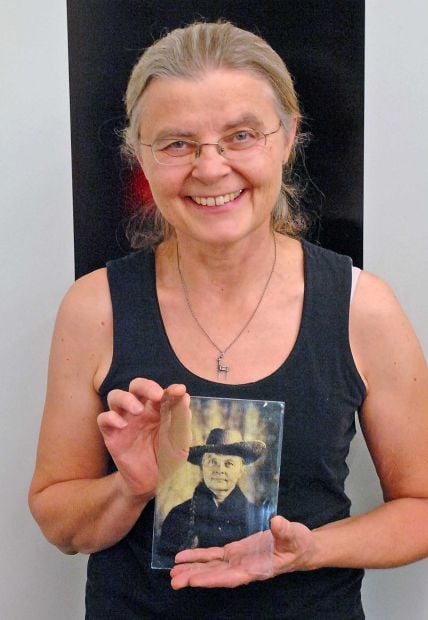 Linda Olson of Minot shows a finished glass plate ambrotype with her image taken by Shane Balkowitsch on Friday, Nov. 22, 2013, in Bismarck.

BISMARCK, N.D. — A local hobby photographer and a Lt. Col. George Custer "living historian" will team up Dec. 5 to recreate a well-known photo of Custer using the popular photography process of the time.

Shane Balkowitsch has been doing that type of photography for about a year. He was approached by Steve Alexander, a Custer re-enactor, about recreating what Alexander felt was Custer's most famous photo.

The photo shows Custer in profile, wearing his full military uniform, with his arms crossed. It was taken by a photographer who took photos of a number of major war figures, but later died penniless.

Balkowitsch, CEO of Balkowitsch Enterprises Inc., an online retail company, started to teach himself wet plate photography, as the older process is known, after seeing a photo done that way online.

Wet plate photography, also called the collodion process or ambrotype, involves a glass plate — coated with specific chemicals and then in silver nitrate — placed into the camera, which is then exposed to light. The plate is developed in a dark room and creates a very high quality black and white image.

The images, since they are coated in silver, don't degrade and hold up remarkably well, Balkowitsch said.

Custer is known for his "last stand" at the Battle of the Little Bighorn in 1876. He also possessed a rather large ego, Balkowitsch said, having many photos taken of himself at a time when they were not easy to create.

Balkowitsch called Custer "one of the most photogenic people of the 19th century."

The most difficult aspect of recreating the photo likely will be the lighting, Balkowitsch said. When the photo was taken in 1865, it was likely done outdoors for the natural sunlight. However, Balkowitsch and Alexander will use artificial light.

Wet plate photography isn't a process used much anymore. The North Dakota Art Gallery Association has chosen Balkowitsch for a yearlong traveling exhibition, which will appear across the state.

This photo of Lt. Col. George Custer was taken in 1865. Shane Balkowitsch and Custer re-enactor Steve Alexander are planing to recreate the photograph Dec. 5 using the process of the time.

Shane Balkowitsch poses with the camera he uses to take wet plate photographs, or ambrotypes. Seated at right is Rose Klein of Minot, whom Balkowitsch was photographing on Friday, Nov. 22, 2013.

Linda Olson of Minot shows a finished glass plate ambrotype with her image taken by Shane Balkowitsch on Friday, Nov. 22, 2013, in Bismarck.