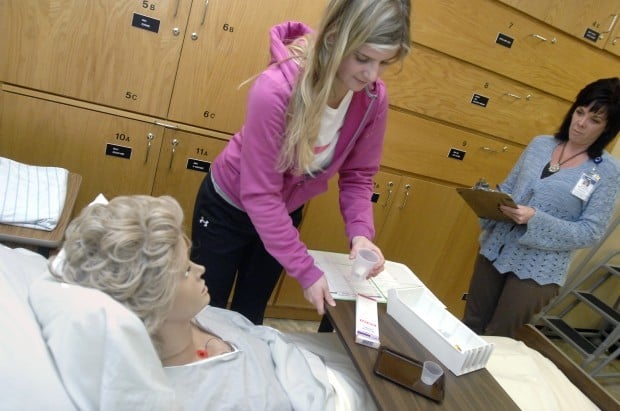 Sanford College of Nursing student Hailey House, left, and instructor Sheila Heinert demonstrate the testing procedures for proper monitoring and administering medications of a patient last week at the school in Bismarck. 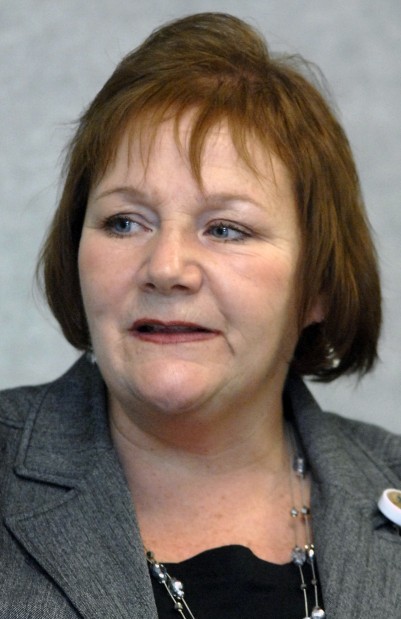 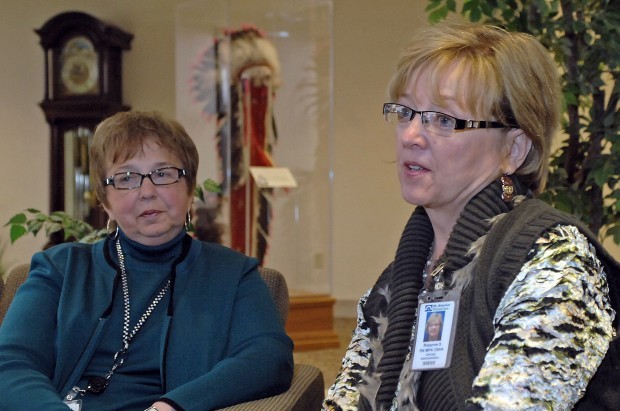 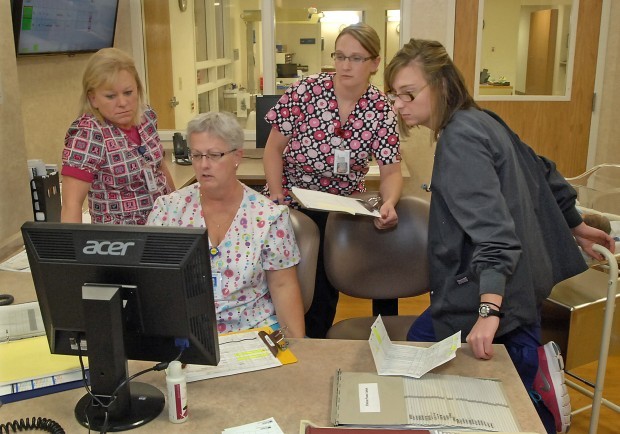 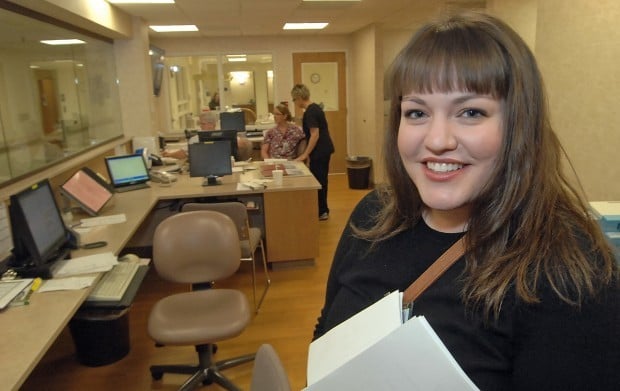 Maria Kogle is a registered nurse who recently moved to Bismarck from Minnesota and has taken a job at St. Alexius Medical Center.

Cara Jahner, 24, couldn’t find a job at either Bismarck hospital after graduating in May 2011 with a nursing degree so she spent a year and a half working at Kindred Hospital, a long-term acute care hospital in Mandan.

“I think I got seven calls to come in for an interview at Sanford,” she said.

Representatives of both Bismarck hospitals say there is always a need for nurses, but the need is especially acute now.

“If I could hire 30 nurses today, I’d do it,” said Rosanne Schmidt, chief of nursing at St. Alexius.

Jan Kamphuis, chief nursing officer at Sanford Health in Bismarck, said the hospital is always looking to hire nurses, especially those with experience. Right now, there are openings in every unit.

The situation is similar at St. Alexius: The need for nurses is not confined to one area, Schmidt said.

Since May, Sanford Bismarck has hired 64 newly graduated nurses, Kamphuis said. The hospital has hired 119 nurses since Jan. 1.

“Because Bismarck’s growing, it increases the workload in the medical center, meaning we need more nurses,” Kamphuis said.

Officials at both hospitals say turnover has remained steady and the need is a result of a growing number of patients.

For the first time ever, St. Alexius has hired travel nurses. The eight nurses were contracted through Dakota Travel, an agency that supplies nurses to North Dakota, and began working at St. Alexius on Oct. 18.

The travel nurses are screened, interviewed and reference-checked just like other applicants, said Wanda Pfaff, vice president of human resources at St. Alexius.

“We made sure we had good quality people,” Schmidt said.

Sanford Bismarck has hired travel nurses occasionally in the past but doesn’t have any at this time, Kamphuis said.

Both hospitals have been struggling to find space for all of their patients. It’s not unusual for one hospital to place its patients at the other hospital if it runs out of beds. St. Alexius plans to add 11 more beds within three weeks, which will help immensely, Schmidt said.

Both Sanford Health and St. Alexius Medical Center are taking steps to counteract the nurse shortage.

Pfaff said St. Alexius is heavily recruiting at every nursing school in North Dakota. The hospital is offering scholarships to students and trying to get experienced nurses by paying in part for relocation.

“We even have a referral system. If a nurse here refers someone, we have a bonus or a payment for them,” she said.

Pfaff said the hospital has contacted out-of-state nursing schools, targeting Montana and Colorado., and has recruited nurses from Florida, Connecticut and New York.

“We try to recruit as much as we can in North Dakota, but we have to go outside the state,” Pfaff said. “And that is different for us. We haven’t done that in years.”

“What is produced here in North Dakota isn’t enough to keep up with the demand,” Schmidt said.

Maria Kogle, 23, of Minnesota, graduated from Loyola University in Chicago in May 2011. For the past year, she has been working in a boutique in Edina, Minn., while searching for nursing jobs. A St. Alexius nurse shopping in the boutique encouraged Kogle to apply at St. Alexius after Kogle told her about her difficulty in finding a job.

“And two weeks later, I had a job,” Kogle said with a laugh.

Kogle applied at St. Alexius in mid-August. She interviewed in Bismarck on Sept. 4, accepted the job the next day and found an apartment by the end of the week.

“It was really fast,” she said.

St. Alexius has had success advertising online, especially on Facebook. Those interested can fill out the entire application online, Pfaff said.

“We try to make it as convenient as possible,” she said.

Karen Latham, provost dean of the Sanford College of Nursing, said the college increased its student enrollment last year from 48 students to 64 students to meet the area’s growing need.

“Fast-forwarding five years, we’re thinking that eventually we’ll end up with 100 students per class. But knowing that, finding faculty will be a challenge,” Kamphuis said.

The college has had 100 percent placement of its students for several years, Latham said. Last year, every graduating student found a job in North Dakota. Sanford Bismarck hired 43 of the new graduates and Sanford Fargo hired three, she said.

Latham said hospitals start hiring her students in December despite the fact that they don’t graduate until May.

The situation is similar in other nursing schools in the area.

Glenda Reemts, chairperson of the nursing division at University of Mary, said students used to have a more difficult time finding jobs after graduation.

“Graduates this (past) spring were snatched up pretty quickly,” she said.

Suzie McShane, nursing coordinator and instructor at Bismarck State College, said her students usually have positions before they leave the program or soon after graduation.

McShane said she has received about five phone calls in the past month from agencies statewide asking her to post their openings and requesting to attend upcoming job fairs.

The need for additional nurses isn’t solely due to the influx of patients. Ten nurses at St. Alexius were recently promoted to manage a new computer documentation system that organizes patient medical records and makes them available to other clinics if a patient moves.

“We’re looking at a couple other new programs in the next few months. They’re all going to need RNs ,” she said.

The hospitals have been hiring new doctors. That, in turn, requires them to hire more nurses.

“It takes a team of people to care for a patient,” Schmidt said.

Pfaff said in some ways, the shortage is a good problem to have, since the increase in patients indicates a thriving economy.

“Even though the economy is so good here, it’s creating a lot of anxiety for us because of not being able to fill positions,” she said.

For new nursing graduates like Kogle, the opportunities are welcome after a long job search. Kogle gets to live her dream by working in St. Alexius’ birthing unit.

“I even feel more fortunate (my job) is in the area I want to be in,” she said.

Although both Bismarck hospitals recruit experienced nurses, officials say there are benefits to new nurses as well.

Sanford College of Nursing student Hailey House, left, and instructor Sheila Heinert demonstrate the testing procedures for proper monitoring and administering medications of a patient last week at the school in Bismarck.

Maria Kogle is a registered nurse who recently moved to Bismarck from Minnesota and has taken a job at St. Alexius Medical Center.