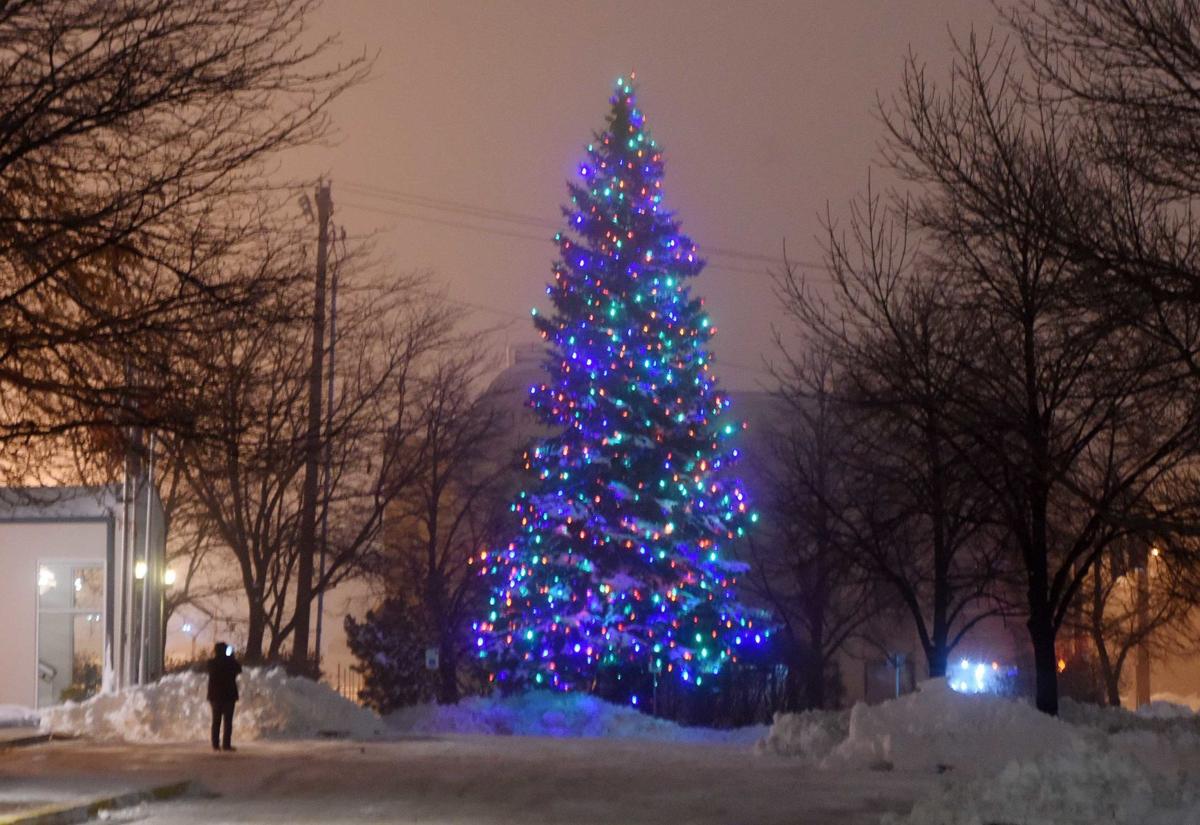 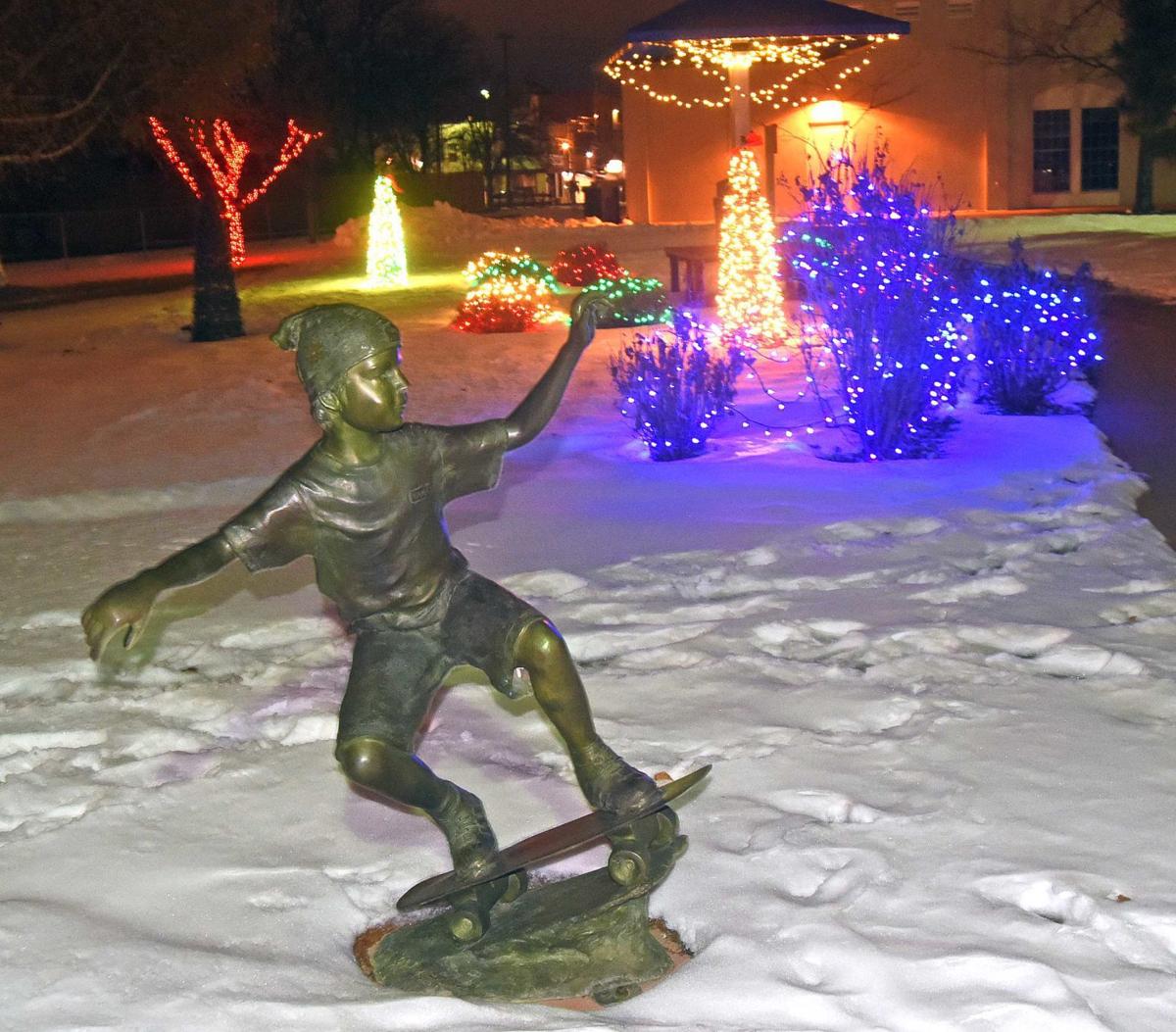 A Christmas lighting display in Bismarck's Peace Park adds color to the variety of bronze sculptures including this skater in the downtown park. 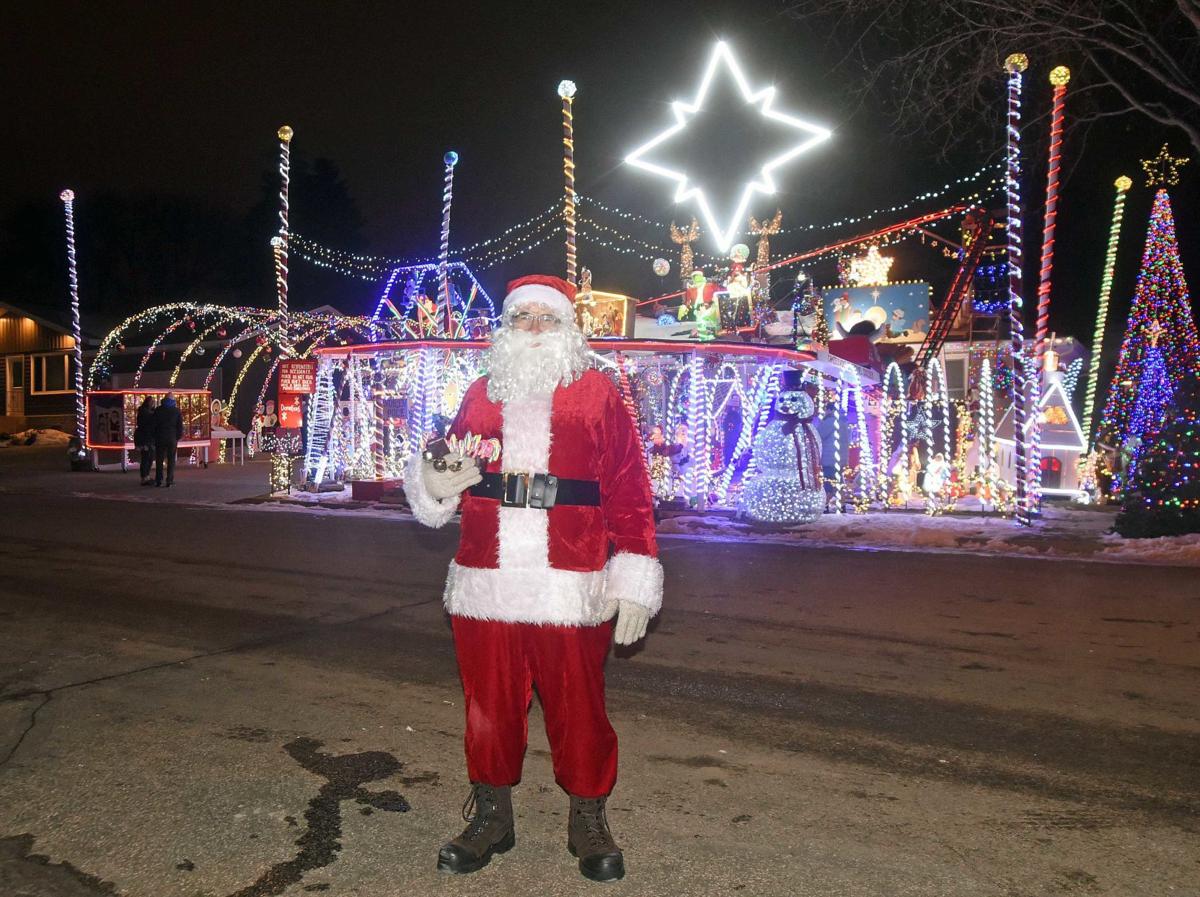 Even Santa Claus is attracted to the bright lights at the Chmielewski family lighting display on Kennedy Avenue and 23rd Street in east Bismarck.

A festive Christmas tree lights the snow-covered grounds of Camp Hancock and the Northern Pacific No. 2164 steam locomotive at the site where the city was established in 1872 near downtown Bismarck. The locomotive has been at the state historic site since 1955.

New holiday displays including a city Christmas tree are brightening downtown Bismarck, while a display in the eastern part of the city that proved popular in recent years has returned this season.

Lights have been strung up throughout Peace Park downtown and will remain through New Year's Eve. A large decorated evergreen along Fifth Street, adjacent to the park, is being lit up from 5 p.m. to midnight.

It's the first Christmas tree in that location, and the first "city tree" since the Belle Mehus Auditorium stopped featuring a 14-foot Christmas tree in its front atrium window in 2015, according to Eileen Walsh, executive director of the nonprofit Dakota West Arts Council.

The council purchased light and Christmas display pieces for Peace Park from Davina French, and from siblings Greg and Gigi Wilz. For more than a decade, French and his wife, Sharon, had a friendly lighting competition with their Wilz family neighbors at Chestnut Drive, drawing visitors from around the area. It was discontinued last year. Some family members helped about a dozen other volunteers set the lighting displays at Peace Park, according to Walsh.

“They love the fact of seeing some of their displays and the lights continue within the city,” she said.

About 20 people came out to watch the tree-lighting ceremony on Nov. 30, during the height of a snowstorm, before mingling at the Bismarck Event Center. The events were part of the Dakota West Arts Council's inaugural Capital City Christmas event, which is funded with the help of donations. The nonprofit will hold a final gala event at the Events Center on New Year's Eve. It will include a silent and live auction, live music and a fireworks show.

“Our hope is the events we are doing would ignite others to do something as well, to light up the capital city," Walsh said.

Funds raised from ticket sales will go toward the arts council mission to promote local arts.

While Walsh hopes the city Christmas tree and the lights at Peace Park are the beginning of an annual Bismarck tradition, another light display that organizers announced last year they would stop is continuing for at least another Christmas.

Alan Chmielewski and his family have been decorating their home on Kennedy Avenue and 23rd Street for 15 years, drawing visitors from around the area, even as far as Watford City. Last year, family members announced they would stop due to complaints from a neighbor.

This past October they reconsidered their decision, hinting in a Facebook post that they would bring back the tradition.

"What if we told you ..." the post read, with emojis of a tree, Santa and a snowflake. Most of the nearly 270 people who commented expressed excitement.

The "Chmielewski Christmas Corner" display is now up at 2228 Kennedy Ave.

"We ask that everyone please be respectful of all our neighbors and do not block or park in their driveways," the family said on Facebook.

A former employee of a Bismarck restaurant used his back door key, access to the safe and code to the business security system on two occasion…

The Bismarck City Commission on Tuesday approved $830,000 in federal funds to help Lutheran Social Services and its partner Community Works No…

Teen found not guilty of attempted murder, three other charges

A Linton man will spend five years on probation and make $23,000 in restitution through monthly payments to Emmons County theft victims.

Say goodbye to bitterly cold temperatures for the foreseeable future.

Bismarck Park Board members delayed taking action Thursday on a request to rename Custer Park after hearing passionate testimony from both sides.

A Christmas lighting display in Bismarck's Peace Park adds color to the variety of bronze sculptures including this skater in the downtown park.

Even Santa Claus is attracted to the bright lights at the Chmielewski family lighting display on Kennedy Avenue and 23rd Street in east Bismarck.

A festive Christmas tree lights the snow-covered grounds of Camp Hancock and the Northern Pacific No. 2164 steam locomotive at the site where the city was established in 1872 near downtown Bismarck. The locomotive has been at the state historic site since 1955.