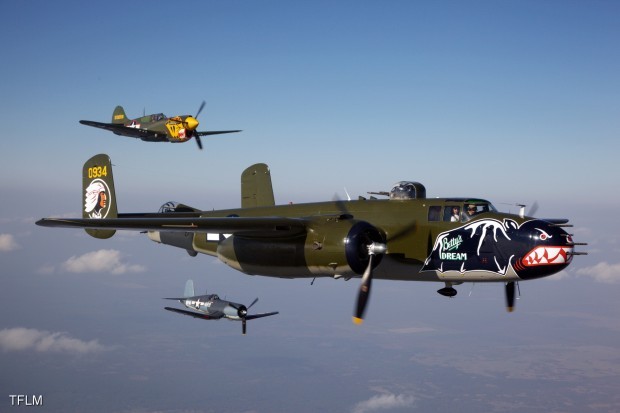 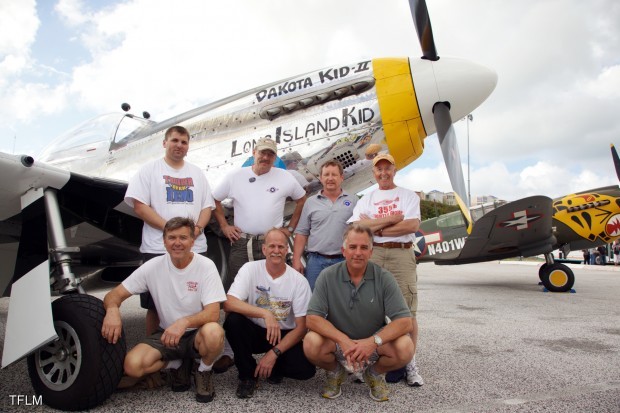 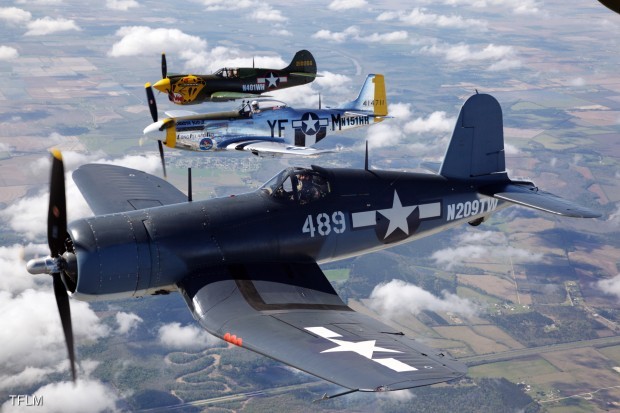 On the wing: a F4 Corsair, P-51 Dakota Kid II and a F40 Flying Tiger.
By BRIAN GEHRING Bismarck Tribune

It is becoming an ever-diminishing list — the men and women who served and survived World War II.

It has been said that history does not belong to us; we belong to it.

A big part of the history of World War II is being kept alive for us to see and touch thanks, in part, to a handful of North Dakotans.

Henry Reichert, a retired Bismarck physician, is one of those men. After serving in the U.S. Army medical corps reserves from 1967 to 1973, Reichert returned to North Dakota and completed medical school, specializing in eye surgery.

Reichert founded the Eye Clinic of North Dakota in 1973 and as part of his practice, he obtained a private pilot’s license to deliver eye care to outlying areas.

Flying is one of those things that gets into your blood and never goes away — a lot like war, Reichert said.

Before retiring in 2000, Reichert wanted to find an airplane “more for fun,” he said. What he found was a piece of history.

Reichert found a P-51 Mustang, the aircraft that almost single-handedly turned the tide of WWII in favor of the Allied Forces.

The P-51 were arguably the most successful aircraft in the war. Nearly 15,000 were built and they destroyed almost 5,000 enemy aircraft in the European theater of operations.

The Mustangs were more than just a fighter plane, through. With their 12-cylinder Rolls Royce Merlin engine that cranked out 1,600 horsepower, they were used as dive bombers, bomber escorts, ground attackers and photo recon aircraft.

Reichert had his P-51, which was manufactured in 1944, totally reconditioned by Gerry Beck of Tri-State Aviation in Wahpeton. When it was completed in 1997, it was finished in the markings of the P-51 flown by Nobel Peterson, a WWII veteran pilot from Hettinger.

Reichert had the plane painted like Peterson’s and named it “Dakota Kid II,” in his honor.

Reichert sold the plane to the owner of the Texas Flying Legends Museum in 2010 but prior to that, logged more than 850 hours of flying time, many with Peterson as a passenger at air shows.

The P-51 Mustang was sold but with one caveat; it will be returned to North Dakota one day.

Recently, Reichert and four other pilots from North Dakota took the Dakota Kid II and five other vintage WWII aircraft for a little spin.

The Flying Legends Museum is based in Houston and Reichert and the others flew from there 850 miles to Fort Lauderdale, Fla., then some 1,000 miles to St. Martin in the West Indies for an air show.

The other aircraft in the  group included a B-25, the bombers used in the Doolittle raid on Tokyo in 1942, a P-40 Flying Tiger, a second P-51, a F4 Navy Corsair and one of the only two remaining flyable Japanese Zeros.

Other pilots included Warren Peitch of Minot, Bob Odegaard of Kindred and his son Casey and Jim McPhearson of Paige.

Reichert co-piloted the B-25 for about two-thirds of the trip as well as returning to the cockpit of the Dakota Kid II.

“The planes performed pretty well,” Reichert said. “There were some mechanical issues but luckily we found them on the ground.”

He said the flight, while it was about the airplanes to a large degree, was so much more than that for him and many others.

“It was a long trip ... that was a feat in itself,” he said. “I don’t think that’s been done in those planes since the second world war.”

Reichert said one of the goals of the owner of the Texas Flying Legends Museum is to keep these aircraft flying as a message of inspiration and one of honor.

“The owner of the museum likes to fly under the radar, if you will,” Reichert said.

In May each year the airplanes are flown to Minot to be on display at the Dakota Territory  Air Museum through July. From there, they go to Maine for a stint before flying back to Texas for the winter.

One day soon, Reichert said the Dakota Kid II will return to North Dakota for good.

“I flew it for 13 years,” he said. “I decided to sell it because the arrangement was so unique.”

Reichert said it’s fitting tribute to North Dakota and the part that aviators here played in that era.

“Five of the six crew members were from North Dakota,” he said. “That’s pretty remarkable. There are some real pioneers of aviation from here and a good share of veterans who spent a lot of time flying in the second world war.”

Giving up the Dakota Kid II was bittersweet, but something Reichert said he felt he was compelled to do.

“It’s almost like owning a piece of art,” he said. “You’re not really the owner, just the caretaker.”

And then there are the men like Nobel Peterson and their legacy.

“I know now that Nobel Peterson’s airplane will be back forever in North Dakota ...  that is how it should be.”

U.S. government attorneys are fighting a lawsuit filed by families after a road washout two years ago on the Standing Rock Sioux Reservation killed two people.

A Mandaree man has been sentenced to eight years in prison for leading authorities on a chase in Theodore Roosevelt National Park that left a passenger stranded.

A district court judge was right to deny a post-conviction review for a man found guilty of fatally stomping a woman in Bismarck in 2016, the …

A surge in coronavirus-related deaths in North Dakota in recent weeks doesn't show any signs of waning, as state health officials on Tuesday r…

Report: Returning Syrian refugees at risk of abuse from government

These cool fins act as feet for this grumpy sea toad

These cool fins act as feet for this grumpy sea toad

Where Taliban and ex-soldiers face their wounds

Where Taliban and ex-soldiers face their wounds

Study: Earth tipped over when its magnetic poles wandered millions of years ago

Study: Earth tipped over when its magnetic poles wandered millions of years ago

On the wing: a F4 Corsair, P-51 Dakota Kid II and a F40 Flying Tiger.
© Copyright 2021 The Bismarck Tribune, 707 E. Front Ave Bismarck,ND | Terms of Use | Privacy Policy | Do Not Sell My Info
Powered by BLOX Content Management System from TownNews.com.
You don't have any notifications.