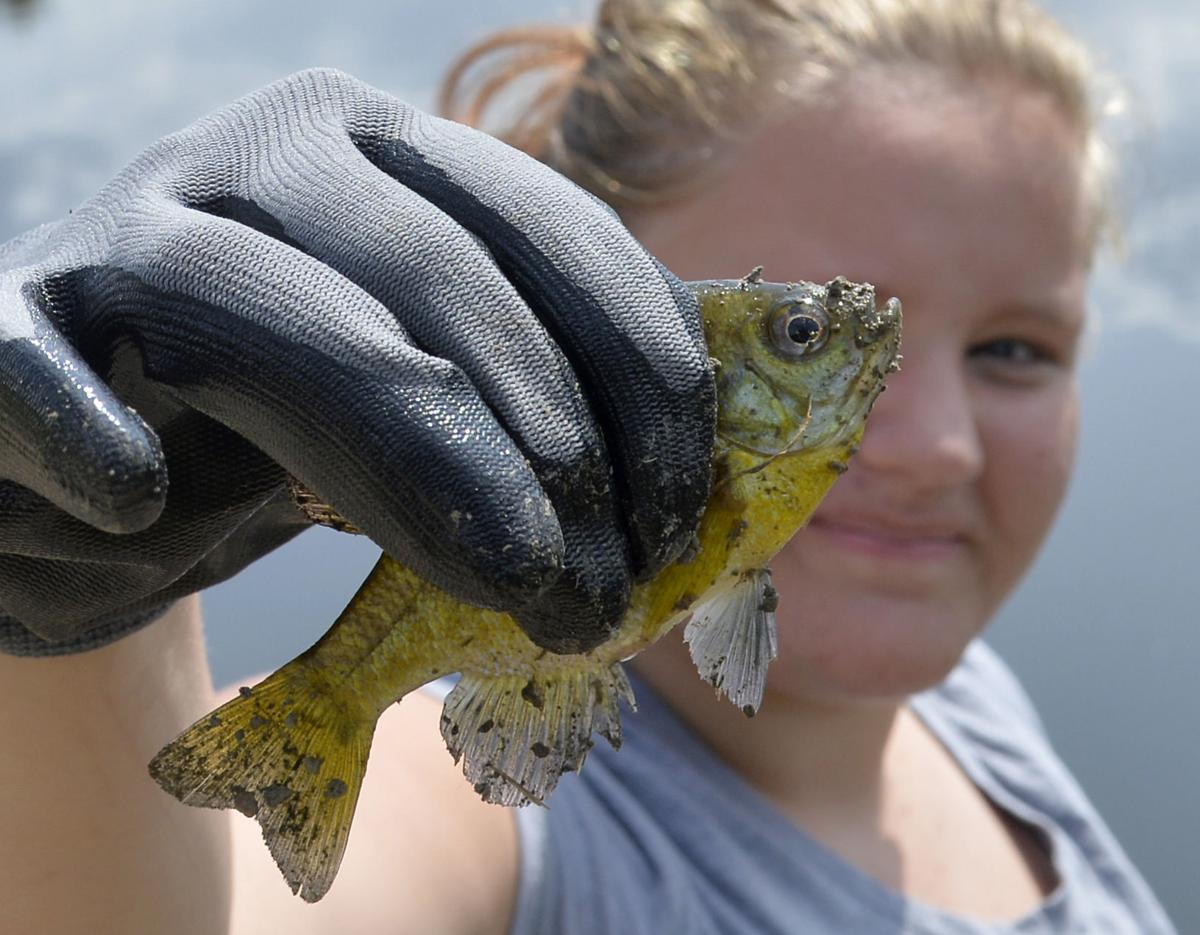 Mikenna Walth holds up a small bluegill at Porsborg Dam on July 28. 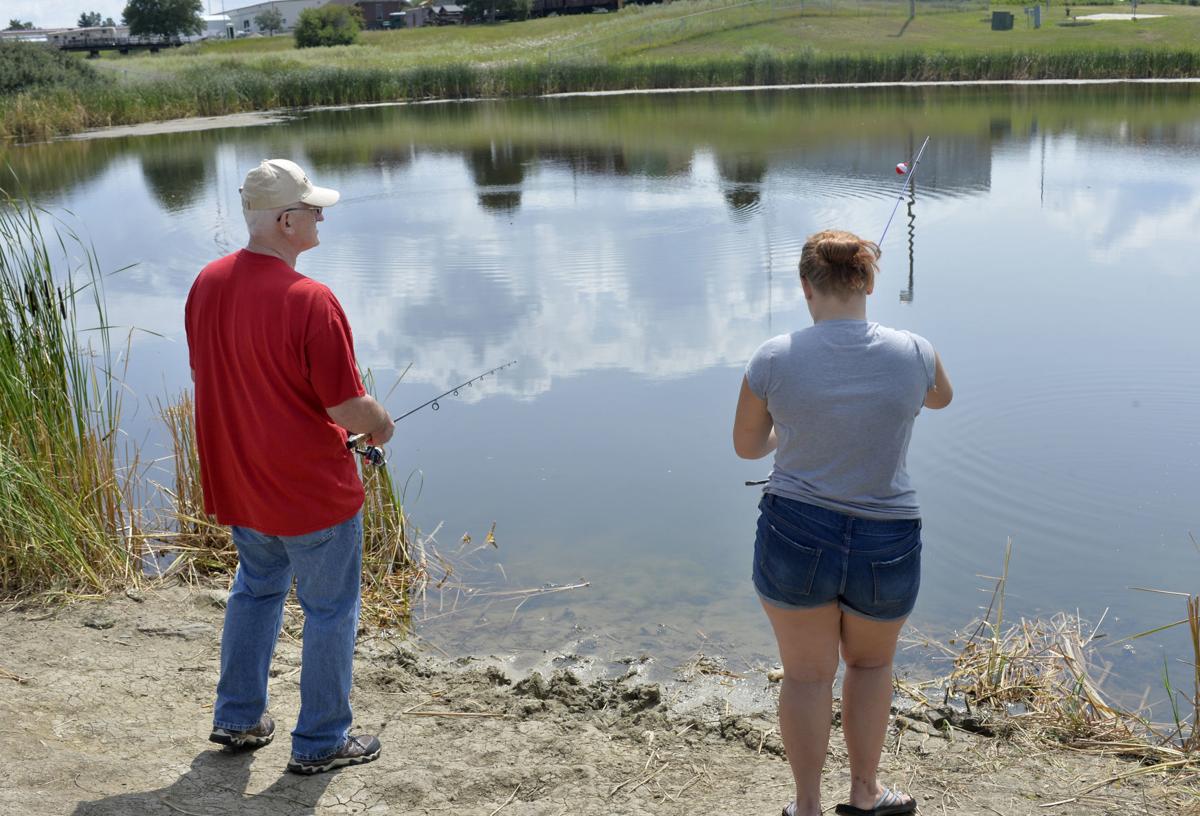 Terry Hochholter and his granddaughter, Mikenna Walth, try their luck at Porsborg Dam.

“Catching bullhead like crazy,” Fuglie said when the couple was out with Crook’s father, Garland, testing the waters with worms and minnows on a beautiful day.

“My father-in-law is 93, doesn’t get to fish much anymore,” Fuglie said. “Mostly, we’re having a picnic and doing a little fishing, just to get him out here on the water.”

Located about 20 miles west of Mandan, Sweet Briar Lake is one of several fishing holes throughout Morton County. The lake is currently under a blue algae bloom advisory from the North Dakota Department of Health.

Hot spots depend on what you’re looking for, according to Paul Bailey, supervisor for the North Dakota Game and Fish Department’s south central fisheries district.

Many of the dams and ponds throughout the county are fairly accessible, from Crown Butte and Sweet Briar along Interstate 94, to Porsborg Dam in northwest Mandan.

“It gets a lot of traffic from neighborhood kids, especially there,” Bailey said. “I would say it’s a well-kept secret, but it certainly does get a lot of attention there.”

Between Glen Ullin and New Salem, Danzig Dam has offered a walleye bite. Jeff Hendrickson, supervisor for the western fisheries district, said walleye are doing well with a good catch rate, sized all the way to 4 pounds.

“Right now, it’s got a good walleye population,” he said, while perch and bluegill have struggled at Danzig Dam.

Game and Fish stocked the reservoir about four years ago after an eradication project for carp and bullhead, though Hendrickson said some still remain. Bailey said Game and Fish stocks "quite a few" of the dams in Morton County, based on current management needs.

Morton County ranks “probably middle of the pack” for fisheries in North Dakota, he added — typical of other counties, but not as many as the prairie lakes near Ashley, Wishek, Tuttle and Robinson. But Morton County’s drainage topography has its advantages for dams.

“Generally, these dams were constructed with angling opportunities in mind, for sure,” said Bailey, adding that many of the dams see year-round use due to their proximity to Bismarck-Mandan.

“They receive pretty extensive use,” he said.

“It (Porsborg Dam in Mandan) gets a lot of traffic from neighborhood kids, especially there. I would say it’s a well-kept secret but it certainly does get a lot of attention there.”

Paul Bailey, with the North Dakota Game and Fish Department

A Bismarck woman is charged with felony child abuse in an incident in which she allegedly was using a belt for discipline.

A Stanton man faces charges after state authorities investigating illegal trapping say they found a pipe bomb on his property.

Saturday Night Live cast member Cecily Strong wore a vintage outfit in a skit this weekend that the show purchased from a Mandan woman.

Authorities have identified a Mandan man who died after fleeing a Saturday traffic stop in the city and later struggling with police, but they…

The campaign promises to "provide the residents of Burleigh County with well-informed decision making, a balanced perspective, and a focus on improving the quality and availability of services to our growing communities."

Mikenna Walth holds up a small bluegill at Porsborg Dam on July 28. 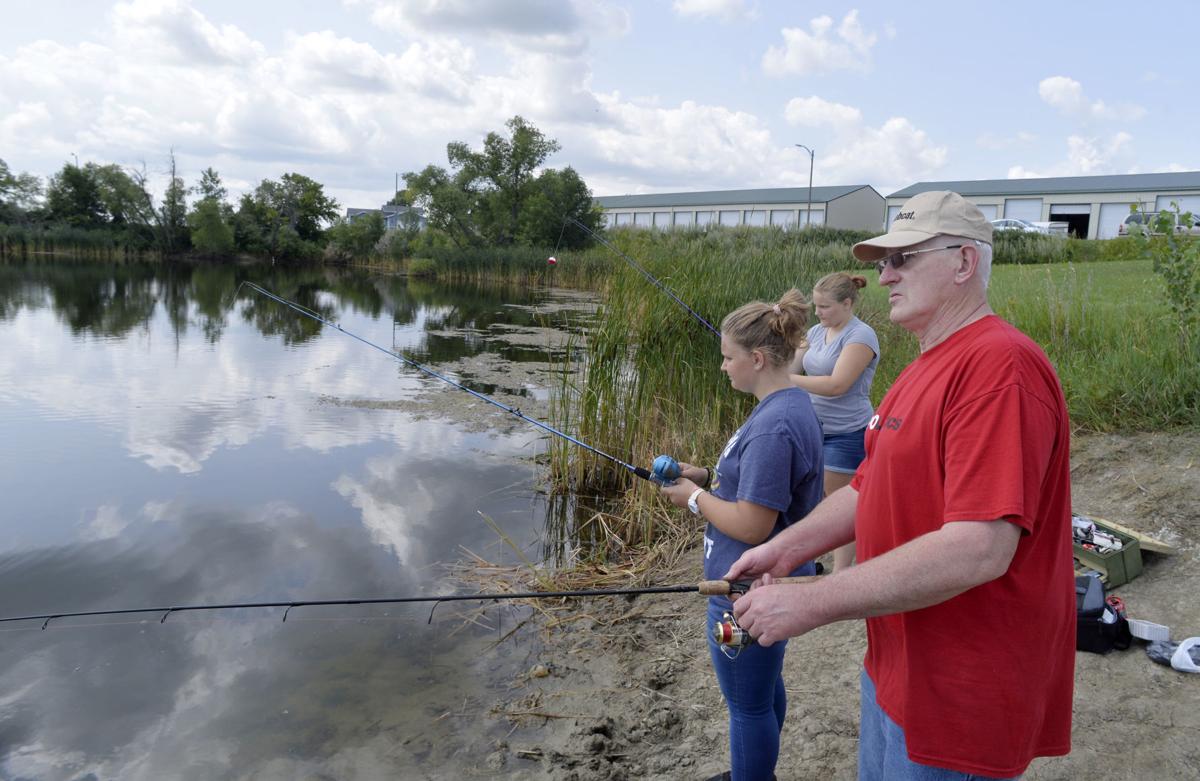 Terry Hochholter and his granddaughters, Isabelle and Mikenna Walth, fish for bluegills at Porsborg Dam in Mandan.

Terry Hochholter and his granddaughter, Mikenna Walth, try their luck at Porsborg Dam.