The entourage headed by a pickup blasting music led Hazen’s HarvestFest parade of local businesses and organizations oozing down the main drag of town in the heart of North Dakota’s coal country.

Kids clambered for candy tossed to the curb, and old folks watched from lawn chairs. For a couple blocks, Cramer’s procession marched without him. Then he appeared.

Clad in a golf shirt, cargo shorts and tennis shoes, Cramer darted in from the side, sprinting to catch up as he had just arrived from a veterans home event in Lisbon, about 250 miles away. In a flash, the 57-year-old canvassed and crisscrossed the street to shake the hands of as many Hazenites as he could.

After all, this is how you win a Senate race in North Dakota, according to Cramer.

“Just getting to as many people as I can with every waking minute,” he said. “And that means driving from Fargo to Bismarck, back to Lisbon to Hazen and lots of places in between.”

Cramer has been North Dakota’s lone congressman in the U.S. House of Representatives since 2013, elected the same day as first-term Sen. Heidi Heitkamp, his Democratic opponent. Waving to supporters (“Hey, Kevin, how are ya?”) and admiring a team of horses as the parade filtered past the finish line, Cramer said North Dakota’s closely watched Senate race comes down to his and Heitkamp’s voting records in their five years in office.

The Cramer-Heitkamp race has garnered national interest as its outcome may decide whether Democrats or Republicans hold the majority of the U.S. Senate.

Cramer said the issues favor him in the Senate race, from rolling back of federal regulations, such as the Waters of the U.S. rule, the repeal of the individual mandate of the Affordable Care Act, his vote for the Tax Cuts and Jobs Act of 2017 and even the more recent trade disputes.

“I think there’s anxiety over the trade issues, but we’re also seeing the trade issues coming around to the benefit of North Dakotans and North Dakota farmers,” Cramer said. “While certainly a complete collapse of some sort in prices based on trade wars could have a negative impact, by and large on net, the ag issues and the farm issues, the rural America issues are very good for me.”

He criticized his opponent for her "identity crisis” in politics, highlighting what he said will be her "yes" vote to confirm U.S. Supreme Court nominee Brett Kavanaugh: “Mark it down, guaranteed.”

“She’s forever having to tout the fact that she’s not really a good Democrat,” Cramer said. “I never have to apologize for being a good Republican.”

Cramer was also an early endorser of Donald Trump for president, who captured North Dakota’s three electoral votes in 2016 with 63 percent of the vote. The former celebrity businessman has visited Fargo twice in support of Cramer. “Competitive” and “important” races in Montana, Minnesota and South Dakota make the North Dakota congressman “a pretty good anchor” for Trump’s travels, Cramer added.

“I’m hoping that logistics work out that he can find the time to drop down one more time in North Dakota, maybe sometime in mid-October and maybe give us a little extra boost going across the finish line,” he said.

With seven weeks to Election Day, Nov. 6, the third-term Congressman said the time left is “a lifetime in a campaign.” Turnout could be an issue, he added. The midterms don’t generate the turnout as presidential years do, but Cramer said the Senate balance and Trump's agenda “adds to the enthusiasm for my voters.”

Cramer found support in the streets of Hazen at HarvestFest. Residents say they like his accessibility and the Republican agenda.

Justin Hill, a former police officer who now owns the Hazen Meats butcher shop, said he sees Cramer as “heading in the right direction” while he doesn’t see Heitkamp aligned with what North Dakotans want.

Smoking a cigarette outside Box’s Bar after the parade, Matthew Lemasters said a number of factors led him to favor Cramer in the race, including the U.S. Senate majority at stake. He also said he won’t vote for a Democrat.

“Not in my world, not in my job aspects,” the coal miner said, who did commend Heitkamp for her work on agriculture issues and her role in lifting the decades-long ban on crude oil exports.

Down the street on a sunny front porch under dancing wind chimes, retired plant operator Dallas Sailer said he’s for Heitkamp as he has been before.

Antoinette Heier, a former teacher of 18 years who’s now the executive director of the Hazen Chamber of Commerce, said the local energy economy is the biggest issue for her in the Senate race, which led her to support Cramer.

Heier said she perceives Heitkamp as having different priorities, such as the opioid crisis, but acknowledged Heitkamp’s work on the Section 45Q tax credit for developing carbon capture technology. The candidates’ local visibility and accessibility is also important for Heier.

“I had people ask ‘Where’s Heidi Heitkamp?’” she said after the parade. “Kevin shows up, not Heidi.”

While Heitkamp did not walk in Hazen’s HarvestFest parade, Heitkamp volunteers did attend, as well as in parades that same weekend in Horace, Mapleton and Mayville, according to Julia Krieger, Heitkamp’s campaign spokeswoman.

Heier said she "won't throw a protest" if Cramer loses the race, but hopes U.S. senators can work together, no matter the party majority. She said she’s met both Cramer and Heitkamp on different occasions.

“Both wonderful candidates, and we should be very blessed to have such professional candidates,” Heier said.

(Editor's note: This is one of two Tribune campaign profiles for North Dakota's U.S. Senate race. Next Sunday will feature incumbent Heidi Heitkamp.)

By this time next week, North Dakota’s U.S. Senate race will be over. 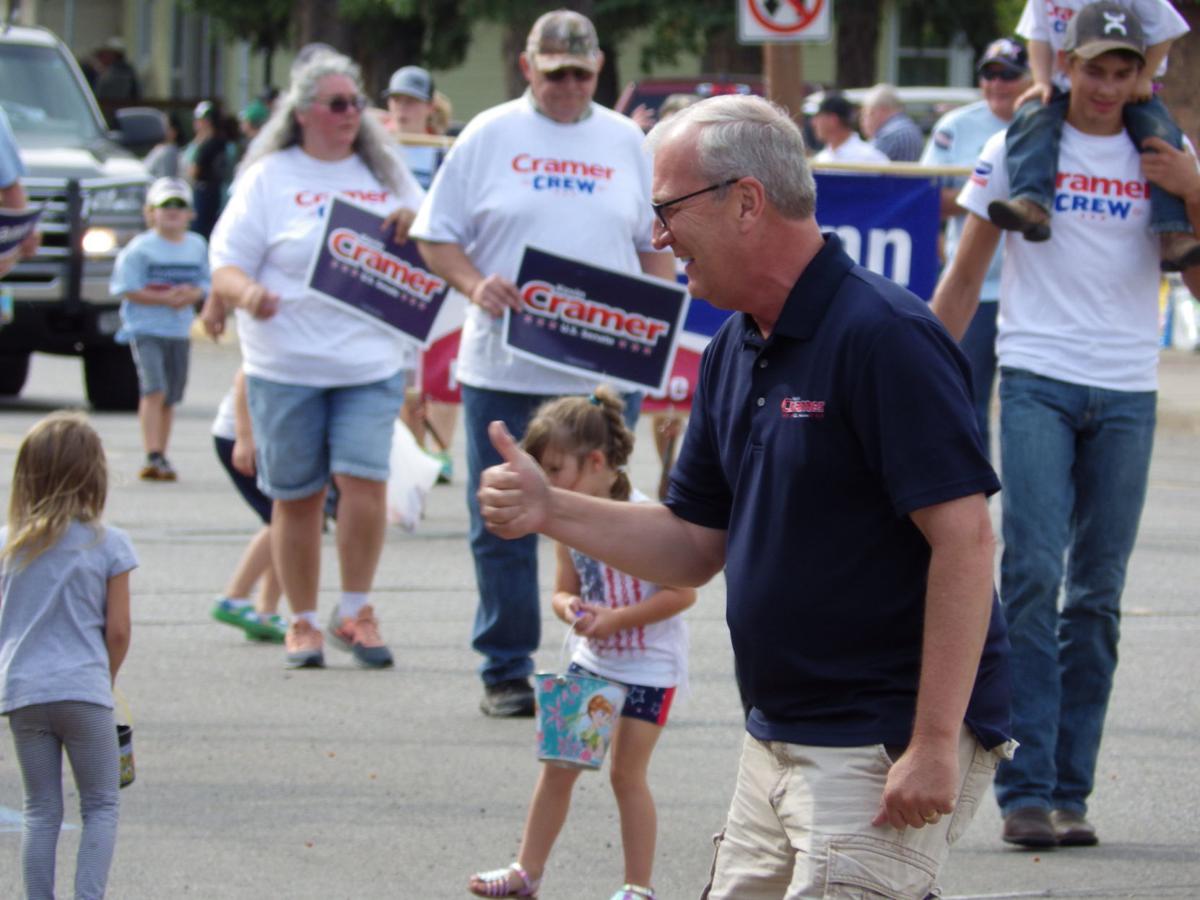 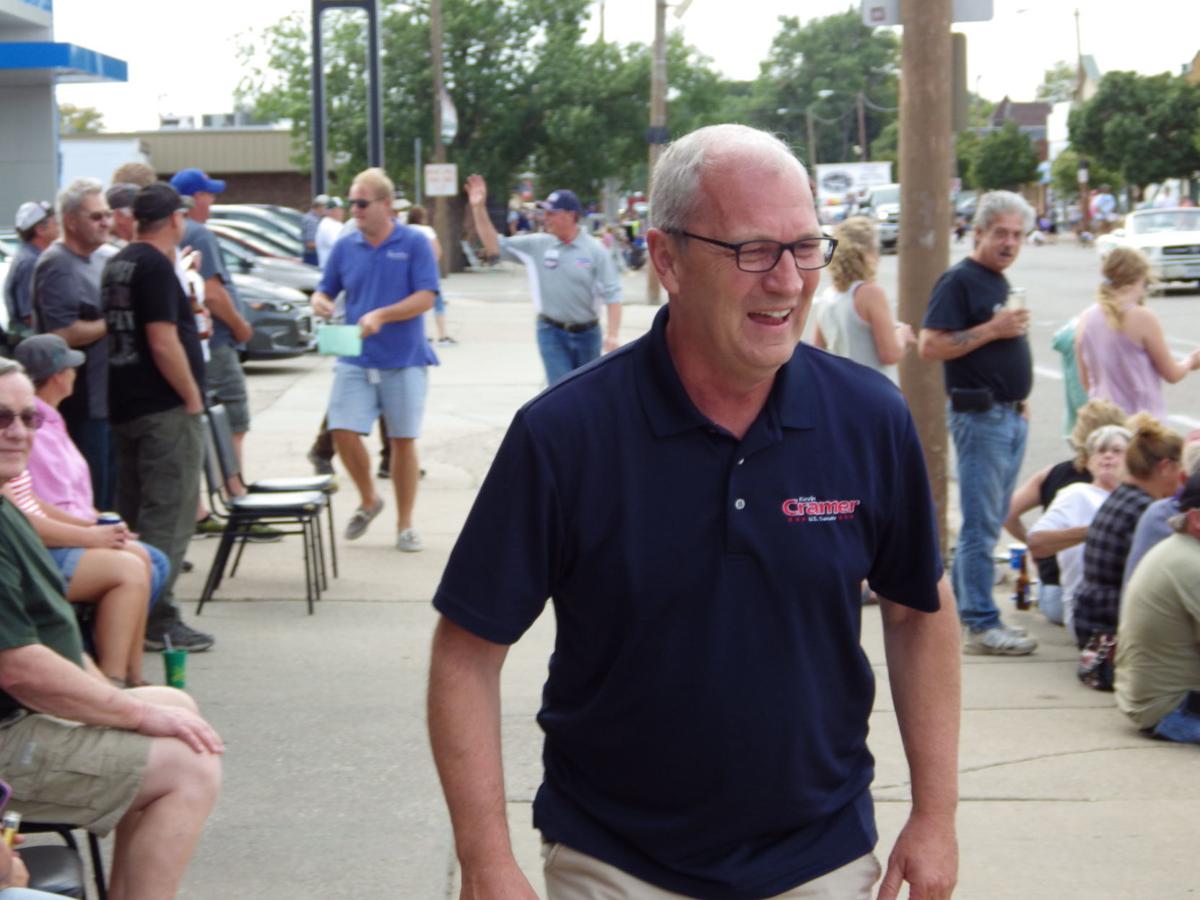 Rep. Kevin Cramer, the Republican nominee in North Dakota's U.S. Senate race, greets people outside the Chevrolet dealership in Hazen during the city's HarvestFest Parade on Sept. 8. North Dakota's Senate race between Cramer and incumbent Democrat Heidi Heitkamp is one of the most closely watched in the 2018 midterms as the outcome may decide the U.S. Senate majority.