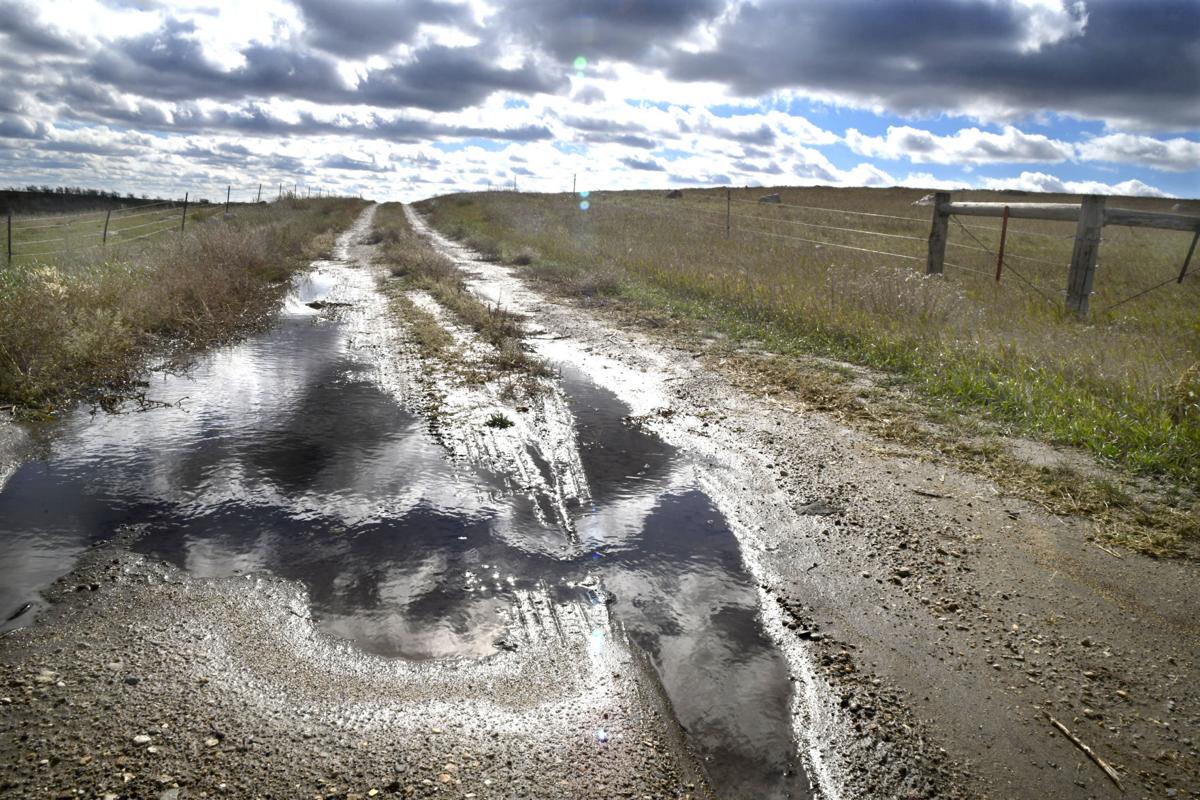 Although this week's rain and snow has improved the drought in North Dakota, much of the state remains in some form of drought category. 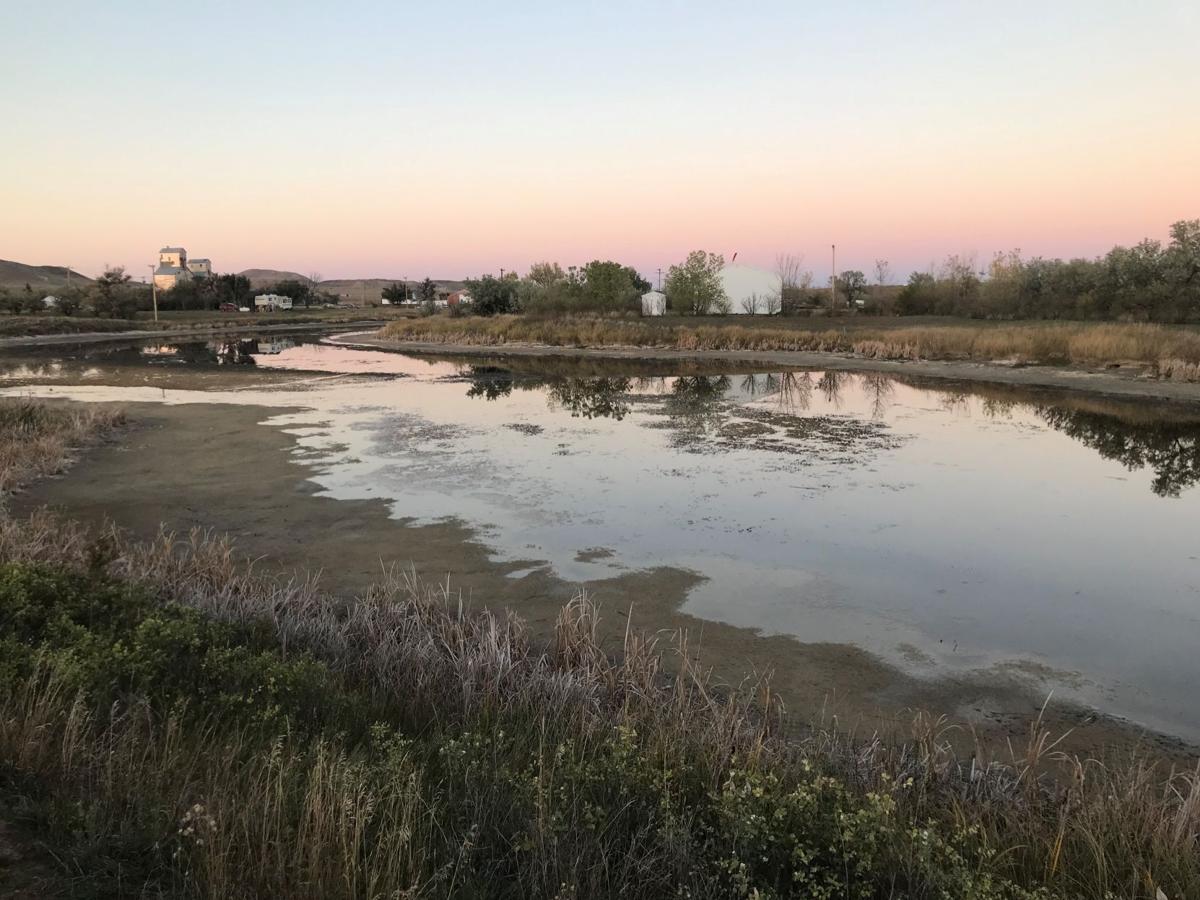 The water level of the pond at Sentinel Butte, shown Oct. 1, has dropped amid the ongoing drought in North Dakota.

Recent rainfall has dramatically improved drought in North Dakota, and this week's snow and rain storm could keep the pattern going.

Meanwhile, the state Agriculture Department has put on hold a program that will reimburse eligible ranchers for a portion of feed transportation expenses, while officials await details of a similar federal program.

Rain helped much of southeastern North Dakota creep out of any drought category for the first time this year. The latest U.S. Drought Monitor map, released Thursday, now rates most of the area as "abnormally dry," a level below the four drought categories. The area last week was in moderate drought, the lowest category.

About 90% of North Dakota still remains in some form of drought, but extreme drought -- the second-worst category -- now covers only about 46% of the state, down from 58% last week.

Nearly all of Burleigh and Morton counties were in extreme drought last week, but after heavy rain over the weekend, much of the two counties is now in lesser drought categories.

A pocket of exceptional drought, the worst category, remains in Golden Valley County in the southwest, but that area received several inches of snow from a Wednesday storm that roared through the Rockies and Plains and also brought record rainfall to parts of western and central North Dakota. That precipitation should be factored into next week's drought report.

“After nearly two years of drought, we are extremely thankful for this heavy, wet moisture," said Beach Auditor Kimberly Gaugler, who added that snow reports in the county were as high as 8 inches.

Dickinson (1.57 inches) and Minot (1.6 inches) also broke city precipitation records for the date on Wednesday. Dickinson's record had stood for more than a century.

North Dakota pasture and rangelands were rated 76% poor or very poor, and 81% of stock water supplies were in those categories -- both slight improvements.

However, the recent precipitation is "just a drop in the bucket for what is needed to end the long-term drought" in the West, AccuWeather Meteorologist Brian Lada wrote.

The most recent drought briefing from the National Weather Service indicates the same, saying "Drought is expected to persist through the fall, with some improvement of drought conditions recently due to widespread rain."

The state in late August reactivated the Emergency Feed Transportation Assistance Program and approved $2.5 million to fund it. The program reimburses a portion of hay hauling expenses for drought-stricken ranchers.

Applications were to open in mid-September, but the U.S. Department of Agriculture around that time announced the expansion of the Emergency Assistance for Livestock, Honey Bees and Farm-raised Fish Program to help cover feed hauling costs for drought-impacted ranchers. The state has delayed applications for its program.

“We are awaiting details of the USDA program and will develop parameters around it so that we don’t overlap,” Agriculture Commissioner Doug Goehring said Thursday. “Livestock producers interested in the state program should continue to keep records and receipts for transportation costs for purchased feed or feed put up outside of normal operations.”

Updated details can be found on www.nd.gov/ndda/eftap as they become available. Producers with further questions can email haytransport@nd.gov or call 1-844-642-4752.

USDA on Wednesday announced an online tool available to help ranchers document feed transportation costs for its program, and said it will begin taking applications later this fall.

The ELAP Feed Transportation Producer Tool is a Microsoft Excel workbook that enables ranchers to input information specific to their operation to determine an estimated payment. Final payments may vary depending on eligibility. A tutorial video is available at fsa.usda.gov/elap.

The state and federal governments have implemented numerous programs to help drought-stricken farmers and ranchers. Details on available drought resources in North Dakota can be found at https://www.nd.gov/ndda/drought-resources. Producers can access the federal Agriculture Department's Disaster Assistance Discovery Tool or Disaster-at-a-Glance fact sheet at www.farmers.gov.

The hot, dry conditions over the summer and early fall have led to about 2,400 wildfires in North Dakota burning about 125,500 acres. The number of fires is more than 2 ½ times the number all of last year, and the scorched acres are more than 10 times what burned in all of 2020.

However, "Activity has been down due to the (wet) conditions over the past week," said Beth Hill, acting outreach and education manager for the North Dakota Forest Service.

All western and central North Dakota counties except for Burleigh, Emmons and Kidder continue to have some form of outdoor burning restrictions in place. The entire state was in the low fire risk category on Thursday.

“Some people are not ready for this blast of winter weather, but the snow and cold is a welcome relief for fire crews that have been battling wildfires (in the West) for weeks,” AccuWeather National News Reporter Bill Wadell said.

Information on current fire danger indexes and county burn bans is available at https://ndresponse.gov/burn-ban-restrictions-fire-danger-maps. Fire restrictions on the Dakota Prairie Grasslands are at https://www.fs.usda.gov/alerts/dpg/alerts-notices.

A roof leak at the North Dakota Heritage Center & State Museum amid record rainfall in Bismarck led to interior flooding and the temporary closure of some exhibits.

Although this week's rain and snow has improved the drought in North Dakota, much of the state remains in some form of drought category.

The water level of the pond at Sentinel Butte, shown Oct. 1, has dropped amid the ongoing drought in North Dakota.