Wild-card weekend: Updates and scores from the NFL playoffs 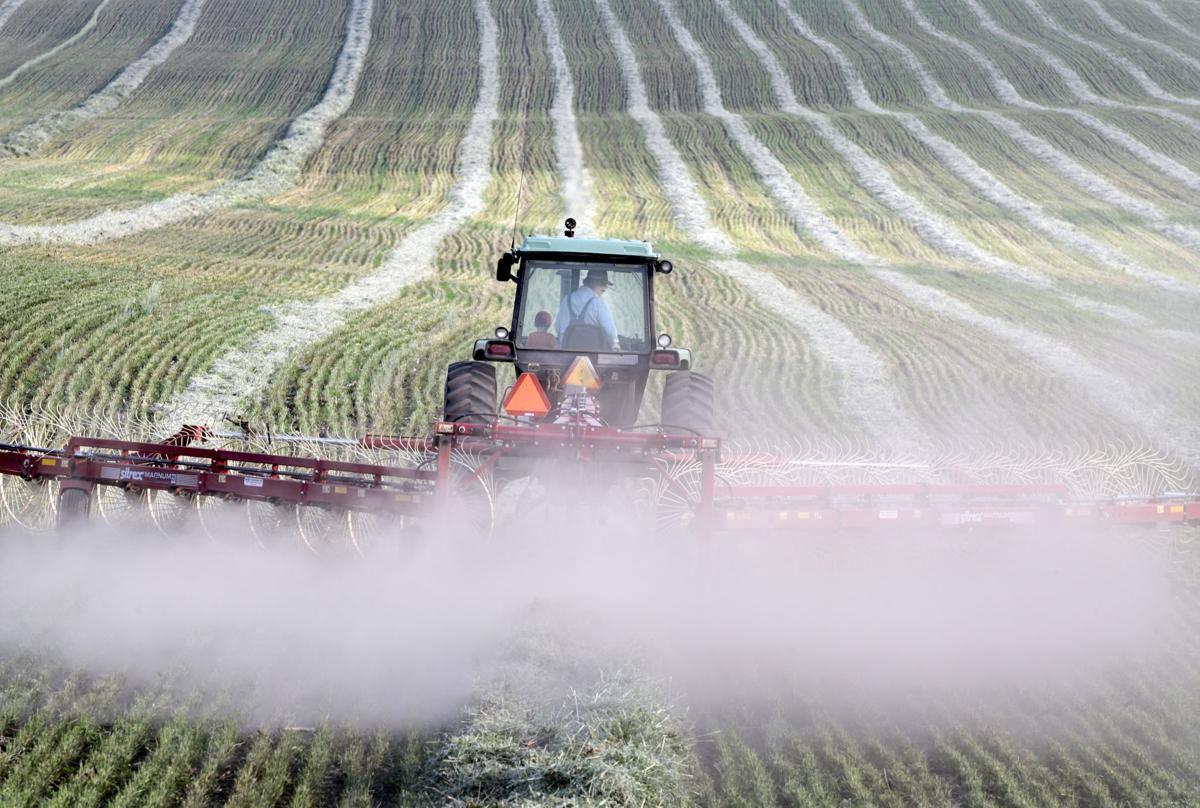 "Sickening." "Terrible." "Depressing." Those are the words Bob Sorch used to describe the devastating drought affecting this year's crops as he raked thin windrows of oats with his grandson, Finley, 2, southeast of Wilton last week. Sorch and his son, Max, planted the oats in the spring with hopes of harvesting the small grains crop, but the lack of rain stunted its growth and the two decided to bale it for hay. 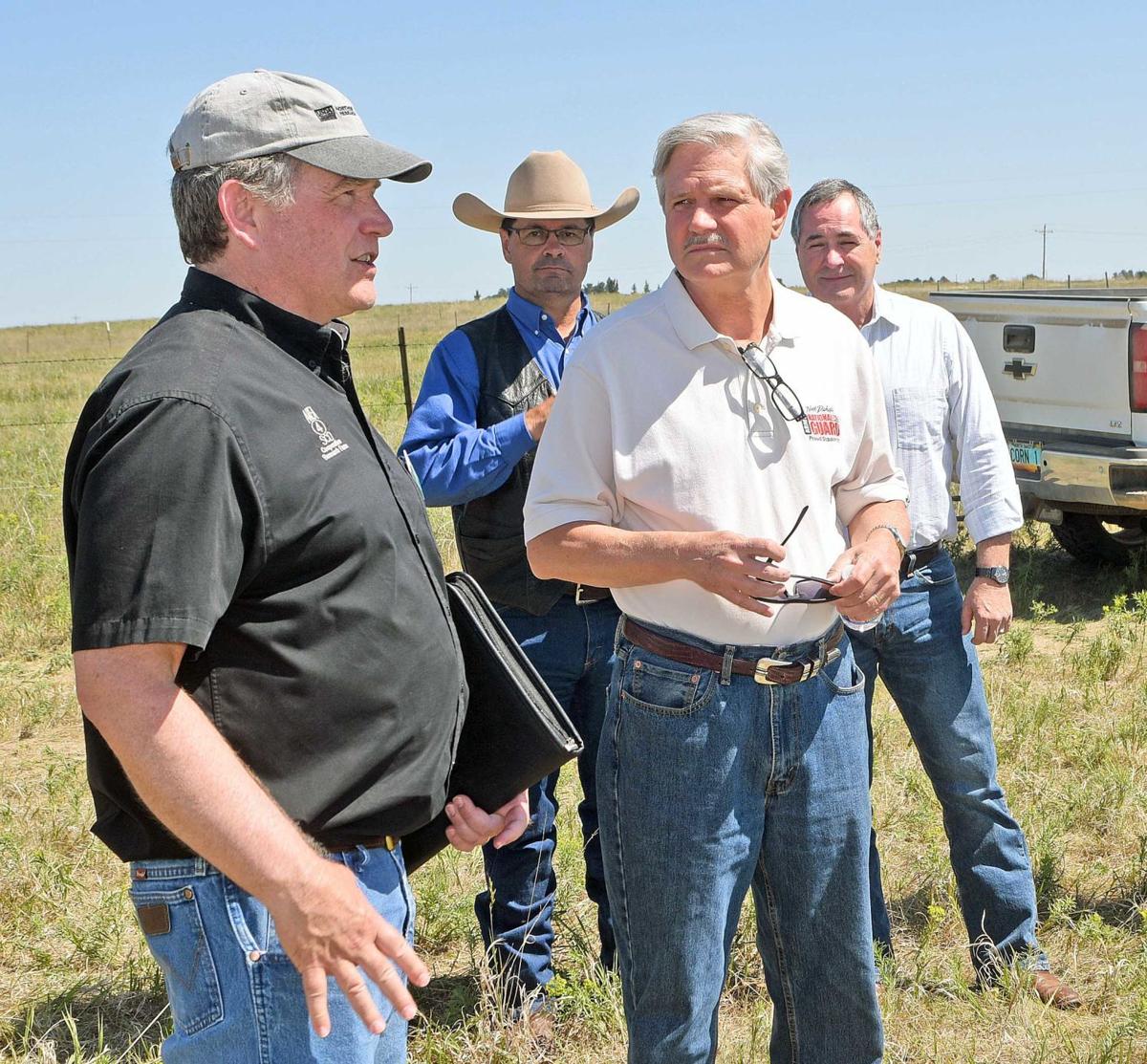 Brian Schneider has farmed and ranched north of Steele all his adult life, and he’s seen some dry years. None in his memory has been as bad as 2021.

“This one is tougher,” he said.

Just as tough are the decisions that come with a drought. Schneider, 53, took steps in May to extend what forage he had, selling about 20% of his Black Angus cow herd. He wanted to stay ahead of a drop in market price that he knew would come when other producers started selling because of the drought. And keeping those cows would have meant using more feed.

“We’re trying to conserve a little feed for next winter,” Schneider said.

He isn’t the only one making hard decisions. The entire state has been at least abnormally dry -- the first step on a five-rung drought ladder that tops out at exceptional drought -- since the start of the year. Nearly half the cattle in North Dakota are in extreme drought locations and 10% are in exceptional drought, according to the U.S. Drought Monitor. About a third of the cattle in the U.S. are in areas affected by drought.

'A lot of cattle moving'

The roots of the 2021 drought are in the fall of 2020. The span from October 2020 to March 2021 is the driest on record, said Janna Block, extension livestock systems specialist at North Dakota State University's Hettinger research center.

“We came into spring with no soil moisture,” she said. “Things haven’t picked up."

Many producers are comparing this year to previous bad drought years such as 1988-89.

Less than a quarter of the state’s stock water supply was adequate and 73% was listed as short or very short, the service said. There is no surplus of stock water in the state.

More than half of the state's staple spring wheat crop this year was rated in poor or very poor condition as of mid-July.

Schneider has watched his wheat crop fail this year. He hopes to plant sorghum-sudangrass where it was in an effort to have some hay on hand for winter. Feed, whether it’s hay or another source, will be the big factor in getting his cows through the cold months.

So far he’s sold older and poorer-quality cows. When a rancher has to start selling the better cows in a herd, “it hurts,” he said.

“I built this herd over 35 years,” he said. “To me they’re not just another herd of cows.”

A Valley City rancher bought Schneider’s cows, but a lot of North Dakota cattle are leaving the state. At Kist Livestock Auction in Mandan, weekly sales are up by 1,000 head over a normal year, an increase of one-third. Some stay in the state, said Matt Lachenmeier, the auction barn's field representative, but there’s demand for cattle in Minnesota, Iowa, Nebraska. He’s getting calls from as far as Missouri too.

“Now we’re starting to run out of homes for them,” he said. “There’s a lot of cattle moving.”

Ranchers are selling replacement heifers or older cows first -- anything that doesn’t have a calf -- and trying to hang on to younger cows, Lachenmeier said. He echoed Schneider’s thoughts about selling cows, saying it’s hard to lose animals that have been part of a long-term breeding program.

“That’s been their life and their livelihood,” he said. “Selling feeder cattle is easy. You don’t fall in love with them.”

Decisions like the one Schneider made to sell cows are complicated.

It’s almost impossible to buy cattle back for the same price, Block said, and some cows because they’re more productive than others are worth more than their sale price. The rancher loses the genetics along with the time and effort it took to build the herd. There could be income tax implications too, and many other financial issues still exist after the sale.

“They still have their fixed costs but fewer cattle,” Block said.

Block in her job works with local extension agents to answer producer questions, give presentations, and consult with agents and ranchers on management strategies and programs. Ranchers do have some options to work through a drought, she said, but most come with additional costs. Supplemental feeds can help, but it’s important to know what nutrients are lacking in the existing forage. If there’s a lot of grass but it’s dry, cows might need protein. If there’s not much grass, they might need energy from grains or byproducts. Some ranchers are planning to graze their hay crops rather than putting them up for hay, but that only creates a hay shortage come winter.

“They might just be kicking the can down the road,” Block said.

Every year for the last 20, Norm Tafelmeyer, of Cooperstown, has sold 500 to 600 bales of hay, mostly to ranchers in North Dakota and Montana. He stopped selling hay in April and is holding on to twice as much as he would in a normal year to make sure he’s got a supply for his own cattle.

His longtime customers are calling as the state’s drought worsens, asking how much he has to sell. One asked Tafelmeyer to put him on a waiting list.

“I told him I have all kinds of lists I can put you on but there’s sad news,” Tafelmeyer said. “There’s no hay for you to buy.”

About half of the state is in extreme drought, and another 8% is in exceptional drought, the worst category. Grass in pastures is in short supply, stunted by a lack of rain in April, May and June, a time frame that producers count on for the majority of forage growth from the state’s cool-season grasses.

Most of the round bales Tafelmeyer sells are prairie hay, and the drought has put a direct hit on production. He recently put up hay on a 40-acre field that in past years has yielded as many as three round bales per acre, each weighing 1,200 to 1,500 pounds.

“I mowed it so it would regrow if it does rain,” he said. “I got eight bales.”

It’s the same thing Dr. Miranda Meehan has seen other producers do: hay if they can, or make the attempt because that’s what they feel they should be doing in an effort to get what hay is available. As an extension livestock specialist with NDSU, Meehan has attended Gov. Doug Burgum’s recent drought town hall meetings and heard producer concerns about water quality and quantity and the lack of forage for cattle.

“People are distraught,” she said. “They’re definitely feeling the stress of this drought.”

'A game-changer for some'

April, May and June rains boost about 80% of the state’s forage growth, Meehan said. Ranchers with tame grass pastures or hay land should expect 50% of their normal forage production. In the exceptional drought areas, it could be less than 25%.

A drought in 2017 hit the state hard too, but drought areas were more isolated, Meehan said. Ranchers were able to buy hay from areas in the state where there was a surplus. This year’s drought is more widespread, affecting much of the Midwest and West. Trucking costs will be higher. Hay could cost more too, but Tafelmeyer thinks the price will stabilize as producers sell livestock and the demand for hay drops.

The rains didn’t materialize this year, reminding Tafelmeyer of 1989, another year when ag producers took a hit because of drought.

Some help is available. Emergency haying of Conservation Reserve Program acres is available in every county but three -- Richland, Sargent and Ransom. The Livestock Forage Disaster Program provides payments to eligible producers who have suffered a loss of forage due to drought or were prohibited by a federal agency from grazing on managed rangeland due to fire. The program in 2017 paid more than $61 million to North Dakota producers, according to the NDSU Extension website.

“This is going to be a game-changer for some, as in they won’t be in the game anymore,” she said.

Schneider expects to stay in the game. He usually feeds his calves through winter, but the cost of feed will determine if he can do that this year. He plans to bring his cow herd back to normal numbers when the weather permits, but he knows it will take time.

“I’ll rebuild with my own stock, so it would take a couple years to get back to where I was,” he said.

2021 is one of the driest years in recent North Dakota memory. Drought blankets the state, and its impacts are numerous and enormous. The Bismarck Tribune in a five-part series looks at how this summer’s weather is affecting people, animals, the environment and the economy.

Sunday: Drought is no stranger to North Dakota, but this one is one of the worst this century.

Today: Farmers and ranchers are dealing with drought that some say is the worst they've ever seen.

Tuesday: Drought is affecting wildlife from fish to birds, and it could put a damper on fall hunting.

Wednesday: Drought has exacerbated conditions for wildfires, nearly all of which are caused by people.

The drought is deepening in North Dakota, and the heat is setting more records.

Drought in North Dakota deepened again over the past week, with little relief in sight this month.

"Sickening." "Terrible." "Depressing." Those are the words Bob Sorch used to describe the devastating drought affecting this year's crops as he raked thin windrows of oats with his grandson, Finley, 2, southeast of Wilton last week. Sorch and his son, Max, planted the oats in the spring with hopes of harvesting the small grains crop, but the lack of rain stunted its growth and the two decided to bale it for hay. 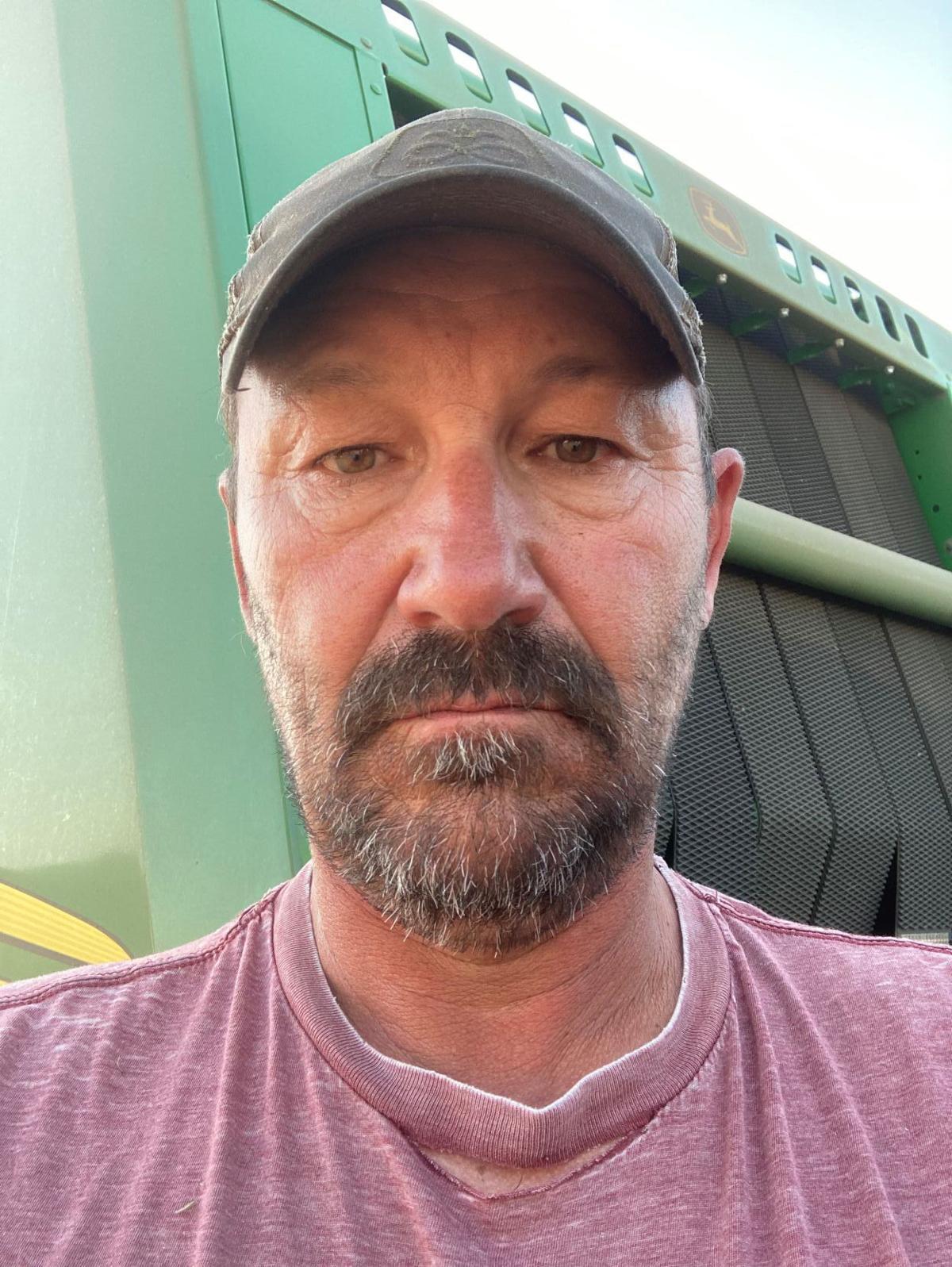