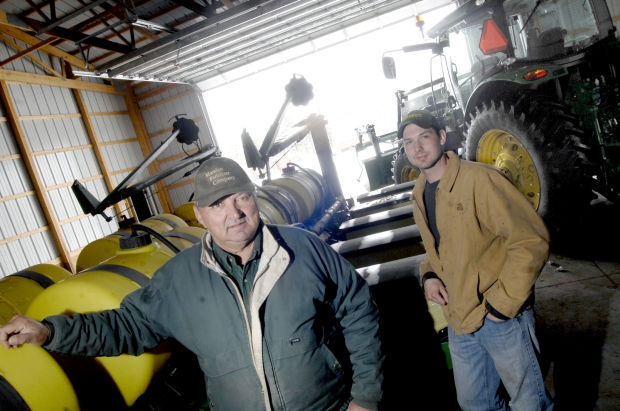 Farmers Dennis Renner and his son, Lance, are waiting for the snow to melt and the ground to dry so they can start spring planting their crops on their land south of Mandan. 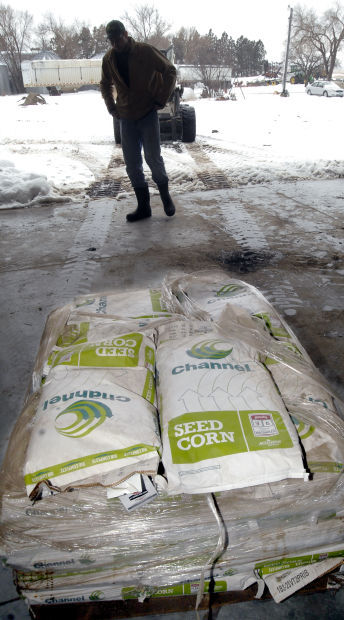 Lance Renner walks by a pallet of corn seed last week as Renner and his dad, Dennis wait for spring planting south of Mandan.

“It was looking nice and early, but now who knows,” Hensler farmer Clark Price said about the beginning of planting season. “It will be a while — two weeks for sure.”

When he finally can get into the field, Price plans to seed his usual mix of crops — about one-third of his acres will go to corn, one-third to wheat and one-third to some sort of broadleaf crop, such as sunflowers, pinto beans or canola.

The U.S. Department of Agriculture’s National Agricultural Statistic Service annual puts out a Prospective Plantings report based on a survey of farmers. The report, which came out last week, said North Dakota producers are planning to plant 16 percent more spring wheat than they did last year, about 5.9 million acres statewide. Durum wheat acres are expected to total 1.1 million, up 38 percent.

As prices have started to fade, prospective corn acres are down 23 percent from last year, to 2.95 million acres.

But Price said he plans to put corn in again this year.

“The people that have been growing corn will probably continue,” he said. “It’s just a nice rotation. I’ve been doing it for a long time.”

Renner keeps corn around because he says it’s easy to raise and a good fit in his rotation schedule.

“All of a sudden what looked so gloomy might not be so bad,” Renner said of corn prices. “You can’t sell it if you don’t have it.”

He never went “overboard” with corn acres when the prices were high, though.

Renner said he plans to plant the same crops he did last year: corn, soybeans, spring wheat, sunflowers and some canola. He has a contract on barley and plans to increase the number of acres he seeds to the crop. He said he also may put in durum wheat to market to North Dakota’s pasta plant in Carrington.

“I believe in diversification,” he said.

Price, who also sells Pioneer Seed in Washburn, expects corn acres to be down about 10 percent to 15 percent in his area, which benefits from proximity to the state’s two ethanol plants. The ethanol plants are the predominant markets for corn in the area.

Soybean planting is forecast to be up 22 percent over last year. Growers say they intend to plant 5.65 million acres. If this happens, it will be a record high.

From his seed sales, Price has noticed more farmers planning to plant soybeans this year. Some are looking at flax as the price is strong.

As rail transport has become more crowded, Renner said he has begun looking for crops that can be shipped dierctly to end users in the state, like sunflowers.

Sunflower acreage is expected to total 670,000 acres, up 34 percent from last year.

Planning what crops will go where and getting equipment ready to go is about all that farmers can do toward planting season now, after most of the state was pummeled with two snowstorms in the past week. But North Dakota farmers are used to adjusting their planting plans.

However, the estimate is just that — an estimate. And April weather can play tricks on producers who have greased up their equipment and are itching to get in the field.

On April 1, 2013, there was no snow on the ground in Bismarck. The USDA’s crop report on March 31, 2013, pondered that the average statewide fieldwork start date would be April 23. Then North Dakota weather does what North Dakota weather does best: disrupts plans and interrupts seasons. April 2013 was the snowiest April in the record books in Bismarck, with 21.8 inches of snow. A wet May followed, keeping soil too saturated for tractors in some places. When it was all said and done, fieldwork didn’t start until May 3, on average.

Winter came early too, with a blizzard in some parts of the state last October, that left many farmers with crops in the field. Renner just harvested his sunflowers in January and the last of his corn didn’t come off the field until February.

Jantzi said NASS will have its first 2014 estimate in the first April crop report, expected out this week.

“It’s a crapshoot at this point. We could say one thing, and it would do something different,” he said. “It’s all just dependent on the weather.”

And weather can change quickly, for better or worse. In 2007, there was no snow on the ground in Bismarck to begin the month. It snowed measurable amounts four times in April, the largest coming on the 10th day, with 5.5 inches. But temperatures stayed in the 60s or higher from the 14th on, and field work started on April 21 statewide.

Morton County Extension Agent Jackie Buckley said a wet fall of 2013 and a colder than average winter, with a relative dearth of snowcover, have resulted in far deeper frost than she can remember for this time of year. Jantzi said that means it will take longer for the ground to thaw, and it doesn’t, at this point, seem likely that tractors will be kicking up dust by the middle of the month.

“If it were to warm up a lot in the next few weeks, that could change drastically,” he said.

Buckley said soil temperatures need to be in the 45- to 50-degree range for seeds to germinate. On Thursday, the soil temperature in Mandan was 32 degrees. She said April 20 would be an “optimistic” guess at when field work could begin in Morton County.

“But I’m not going to guarantee anything,” she said.

Many of the popular North Dakota crops have late May or early June deadlines for planting to be fully insured. Eventually, the weather conditions can play a part in what goes in the ground.

Buckley believes last year’s wet spring moved some producers off of sunflowers. Others planted the same crops but opted for faster maturing varieties, especially of corn.

“It usually doesn’t yield as well ... but if they want to get it mature, they’ll sacrifice that yield,” Buckley said.

Price said if planting is delayed past May 1, some may choose to plant less wheat or cool-season crops. But changes in planned acreage are likely to be minimal.

Rick Krolak, a meteorology technician at the National Weather Service, said temperatures are expected to remain below normal through June.

However, the outlook for precipitation is less illuminating, with the Climate Prediction Center calling for “normal” conditions.

“That can mean anything,” Krolak said.

Farmers Dennis Renner and his son, Lance, are waiting for the snow to melt and the ground to dry so they can start spring planting their crops on their land south of Mandan.

Lance Renner walks by a pallet of corn seed last week as Renner and his dad, Dennis wait for spring planting south of Mandan.