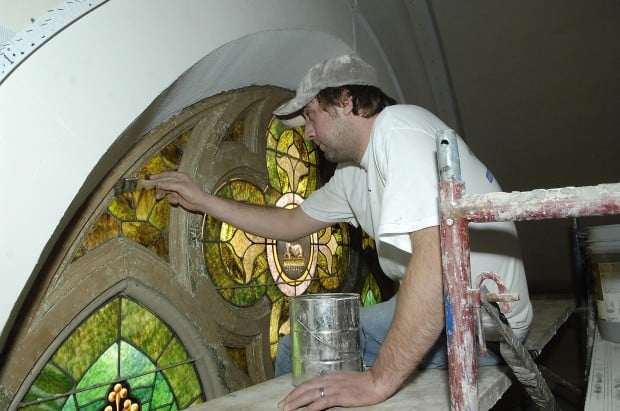 WILL KINCAID/Tribune Painter Steve Kalaman applies paint stripper to the frame of one of the churches stained glass windows. 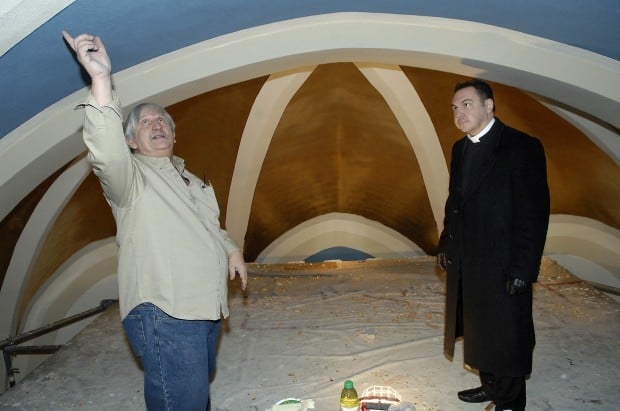 WILL KINCAID/Tribune Doug Henning, left, and Father Patrick Schumacher discuss the ceiling renovation inside the church. The two men are standing on a massive scaffolding that was built for the renovation. Henning is the owner of Henning Church and Historic Restoration. 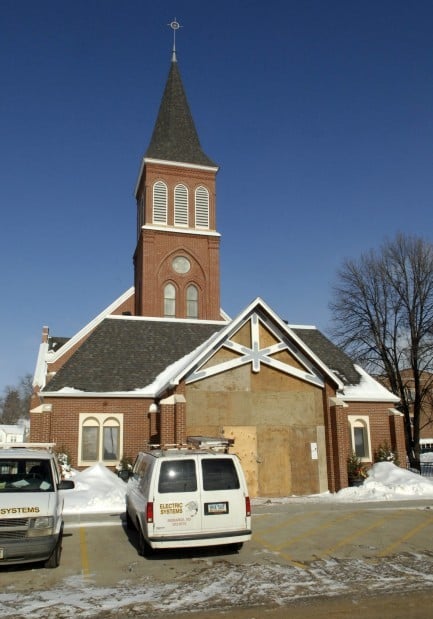 WILL KINCAID/Tribune The front door of Mandan’s Church of Saint Joseph is boarded up while the church is being renovated. The church was built in 1904. During the renovation the church has been holding services in the gymnasium.
By KAREN HERZOG Bismarck Tribune

A regiment of metal grids rise to the ceiling, marching down the nave of the Church of Saint Joseph in Mandan, holding the temporary wooden floor in their upraised hands. Up three flights of gray steps, the newly replastered expanse of ceiling looms overhead. A worker seated on a counterweighted platform strips layers of paint from the wooden arches holding the church’s century-old stained glass windows.

Redoing the 1904 Mandan church is a major project, $1.1 million worth of upgrades and redecoration, new flooring, renovated pews and three large-scale murals. In early December, the parishioners of Saint Joseph began holding Mass in the attached school’s gym while the work crew transforms the church at Collins Avenue and Third Street Northeast.

When this phase is complete, Saint Joseph will have had a complete facelift, inside and out. The church’s brick exterior was completely restored in 2007.

Inside, slate flooring will be installed and the ceiling of the gathering space inside the entrance coffered and lowered to match the lines of the nave. The church’s pews are being refinished and the end pieces replaced in Dickinson. Carpeting will be installed, along with a sound system, Romanesque pendants and recessed fixtures to wash the interior with good light, Schumacher said.

Schumacher said he hopes the work will be done by April 24, though earlier is not out of the question.

It is the first church he has been responsible for renovating inside and out, he said. Saint Joseph was upgraded in the 1940s, the 1970s and the 1990s, he said, “but this is the most extensive (work) the interior has ever seen.”

When the condition of the church was assessed, two major needs were identified: Repairing plaster that had deteriorated over the years, in some places down to the bare lathe, and new lighting.

The electrical system he said, seemed to be installed “as if they weren’t sure if electricity was here to stay,” he said jokingly.

The gathering space will now be more integrated into the design of original church, he said, “recognizing that it was built in 1904, not the 1970s.”

The goal is to restore it to period, he said. That doesn’t mean it’s moving backward, he said; the goal is a “real, dignified liturgical design.”

The murals that will go behind the altar are being painted on canvas in St. Paul, Minn., and will have a classic Renaissance feel, Schumacher said.

Symbolizing the Trinity, God the Father in the central mural is shown presenting his crucified son; the Holy Spirit is depicted as a dove, Schumacher said. The flanking murals show Saint Joseph at the birth of Jesus, and Jesus present at the death of Saint Joseph, “the journey from life to death encompassed by the Holy Trinity,” he said.

On site, Doug Henning, of Henning Church and Historic Renovations of St. Paul, pointed out the gold composite and gold leaf used to layer the arches above the murals. The ribs of the arches will be painted in blue and then stenciled, he said.

Henning’s renovations work began with his father-in-law’s father, Louigi DeNardo, who emigrated from Italy in the early 1900s to work as a stone setter of marble for St. Paul Statuary, he said.

By the early 1940s, a lot of the 1900-era churches needed painting and decorating, so DeNardo began doing that, he said. His son, Louis DeNardo, worked there as well. In 1970, Henning went to work with his father-in-law until the older man’s death in 1982.

Henning Restorations is a small family company primarily serving Catholic churches in the Dakotas and surrounding area. Henning has worked at the Cathedral in Fargo, St. Michael’s and Mary’s in Grand Forks, St. Patrick’s in Dickinson and gilded the crosses at St. Mary’s at Assumption Abbey in Richardton.

Schumacher said he likes working with the artists who bring the vision to life in their work: They see things in a new way, he said.

Architect Al Fitterer of Mandan, who designed the Church of Spirit of Life in Mandan and redesigned St. Patrick’s in Dickinson, is getting to redefine his own church, Schumacher said.

To follow the progress of the project, go to www.stjosephmandan.com.

Why back-to-school shopping is harder this year

The benefits of playing tug-of-war with your dog

The benefits of playing tug-of-war with your dog

WILL KINCAID/Tribune Painter Steve Kalaman applies paint stripper to the frame of one of the churches stained glass windows.

WILL KINCAID/Tribune Doug Henning, left, and Father Patrick Schumacher discuss the ceiling renovation inside the church. The two men are standing on a massive scaffolding that was built for the renovation. Henning is the owner of Henning Church and Historic Restoration.

WILL KINCAID/Tribune The front door of Mandan’s Church of Saint Joseph is boarded up while the church is being renovated. The church was built in 1904. During the renovation the church has been holding services in the gymnasium.
© Copyright 2021 The Bismarck Tribune, 707 E. Front Ave Bismarck, ND | Terms of Use | Privacy Policy
Powered by BLOX Content Management System from TownNews.com.
You don't have any notifications.