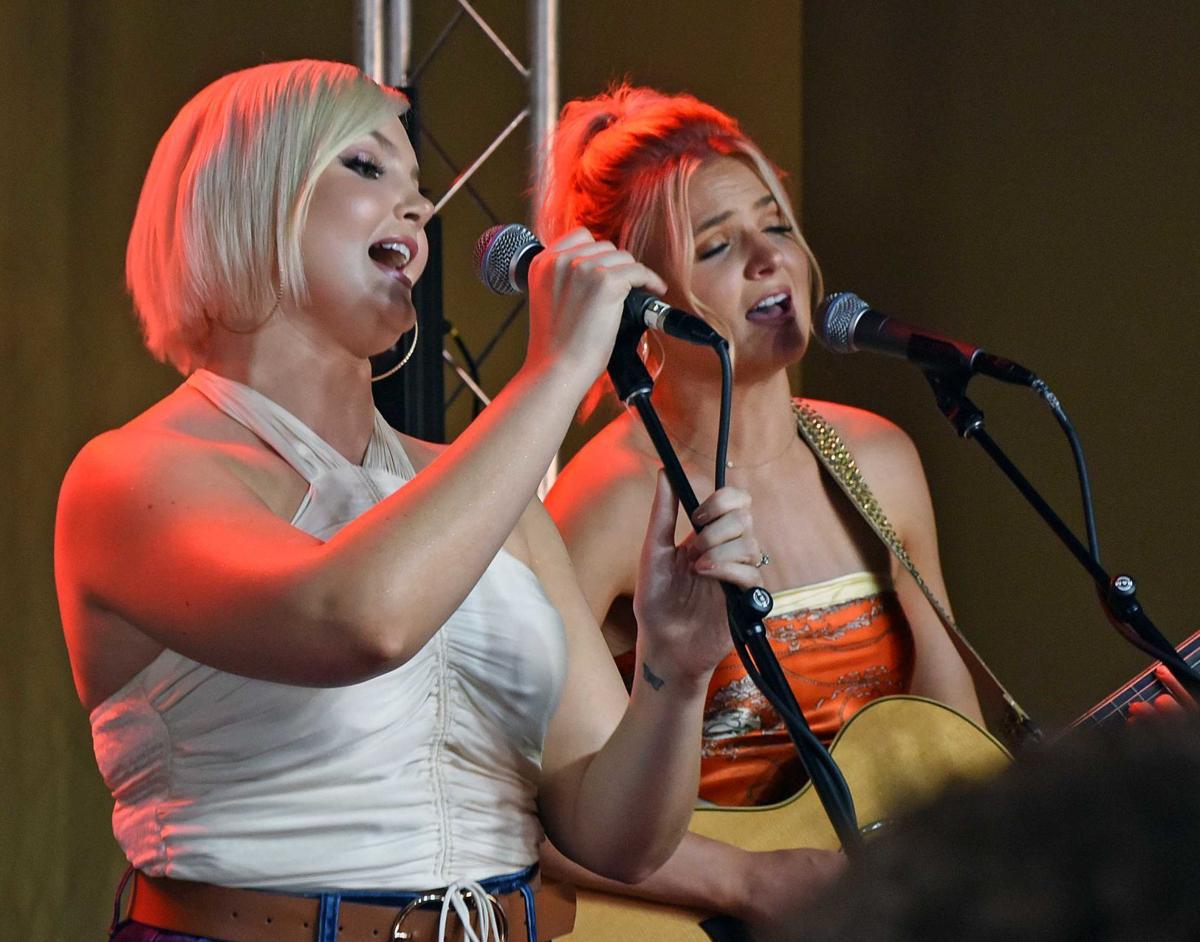 North Dakota's own Tigirlily performed in Bismarck Thursday evening at the Laughing Sun Brewery. Tigirlily was formed in 2013 by Kendra, left, and Krista Slaubaugh and grew a following performing at fairs and festivals. Since 2017 they have been based in Nashville, Tenn. 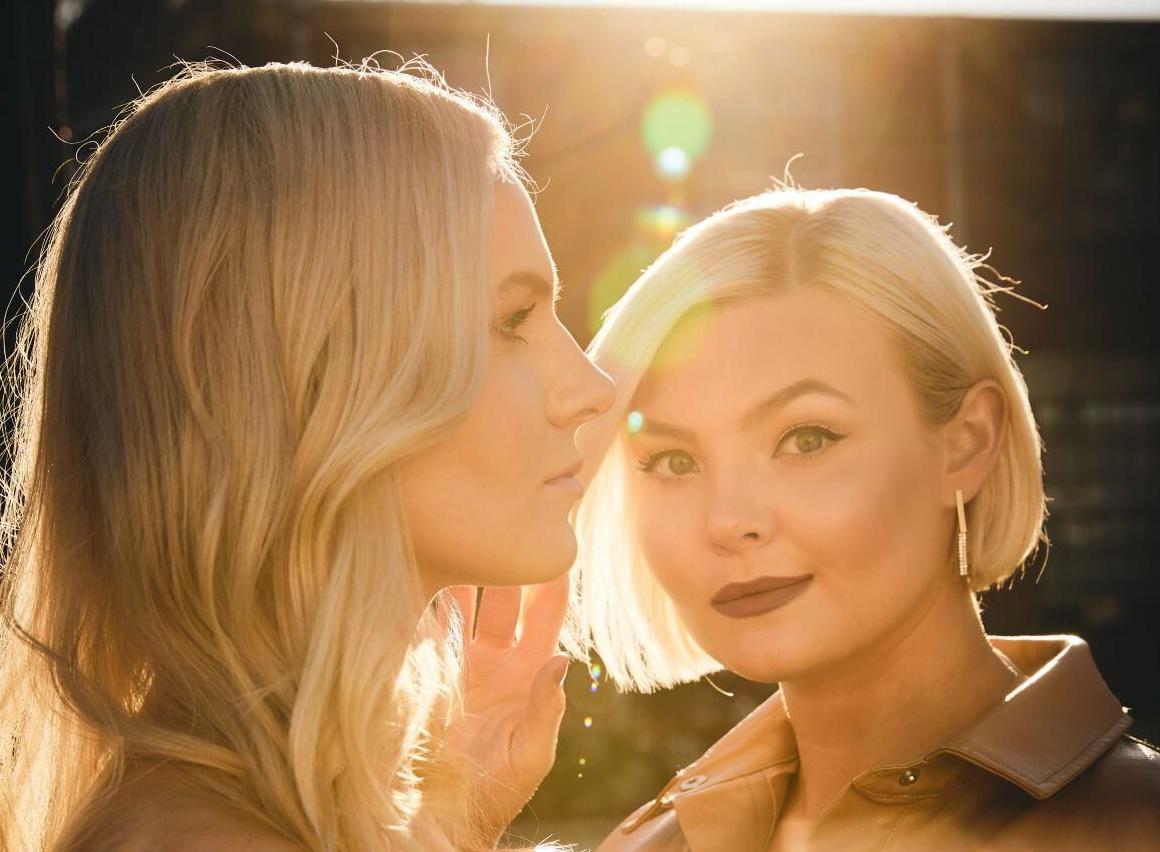 Sister act Tigirlily came home this week to make a special announcement: the release of their first label EP.

Hazen natives Kendra and Krista Slaubaugh during a Thursday show in Bismarck announced that their debut EP with Monument Records will be released July 9. An EP is a recording that has fewer songs than a traditional album.

"We’ve released a lot of music over the years, but this is a project that we’ve been wanting and waiting to do for a really long time," Kendra Slaubaugh told the Tribune in advance of the show at Laughing Sun Brewing.

The sisters, who now live in Nashville, Tennessee, waited to share the news until they were back in North Dakota, home to some of their biggest fans and longtime supporters. They said they couldn't have gone this far without the support they have received from the state in the past eight years.

"I think our fans, especially the ones from North Dakota who’ve been following us for a very long time, are going to be extremely excited," Krista Slaubaugh said.

Tigirlily signed a record deal with Monument Records after scoring a No. 1 iTunes hit called "Somebody Does" in February.

The sisters described the self-titled EP as "Tigirlily wrapped up into five songs." The list consists of "Somebody Does," "My Thang," their latest release "Dig Yourself" and two new songs titled "Known You Forever" and "Everybody's On Something." The sisters said the songs take inspiration from their own lives, and the EP showcases who they are and where they're from.

This will be the first body of work the two have released since they moved to Nashville in 2017.

"It's a huge dream come true to have a team like Monument Records on board helping us along the way, and it's definitely the next step in our career," Kendra Slaubaugh said. "We can’t wait to see where all of this takes us, and we’re trying to enjoy every step of the way."

The EP will be available for pre-order and pre-save across all digital music platforms starting Friday.

Gigi Hadid says she doesn’t want to model any more

Gigi Hadid says she doesn’t want to model any more

Chrissy Teigen apologizes for her cyberbullying

Chrissy Teigen apologizes for her cyberbullying

Sister act Tigirlily has scheduled a free show in Bismarck.North Dakota natives Krista and Kendra Slaubaugh are set to perform at 8 p.m. on Th…

CMT Music Awards 2021: How to watch and who's performing

The CMT Music Awards are Wednesday night. The show, which will air live from Nashville, is hosted by Kane Brown and Kelsea Ballerini and some of country's biggest names are set to take the stage.

CDC guidance saying fully vaccinated people can go maskless has spurred a desire to return to normal, and to concerts. So how risky are indoor concerts?

Who has the Song of the Summer? Lorde, Eilish, Mayer shoot their shot

We don't get to choose the Song of the Summer. It chooses us.

Meet Maneskin, the glam rock band that brought Eurovision back to Italy

Maneskin's win was only Italy's third victory in the contest. The victory means Italy will host next year's competition, with cities bidding for the honor.

Slamming a loser boyfriend (“I know you think you're such an outlaw," Eilish whisper-sings, "but you got no job"), the 19-year-old (she turns 20 in December!) returns with her most rubbery single since "Bad Guy." One potential roadblock in its path to airwaves dominance, however, is that without it's accompanying girls-night-in video — which finds Eilish and a group of pals dancing, eating potato chips, drinking Faygo and generally having the best time — the song loses a bit of its punch.

It doesn't matter what the calendar says; Lorde says it's summer, so it's summer. The New Zealand mood-pop sensation returned last week with this light, airy, upbeat celebration of the sun, which nods to A Tribe Called Quest ("can I kick it? Yeah, I can!" Lorde says, sounding, gulp, happy) and is genetically engineered by producer Jack Antonoff to get the summer party rolling. You have no choice but to submit.

Singer-songwriter Bob Dylan was born 80 years ago on May 24, 1941. Here's a list of the best Dylan albums of all time, from data analyzed by Stacker.

John Davis, one of the true singers behind notorious R&B act Milli Vanilli, has died of coronavirus at age 66, according to his family.

North Dakota's own Tigirlily performed in Bismarck Thursday evening at the Laughing Sun Brewery. Tigirlily was formed in 2013 by Kendra, left, and Krista Slaubaugh and grew a following performing at fairs and festivals. Since 2017 they have been based in Nashville, Tenn.