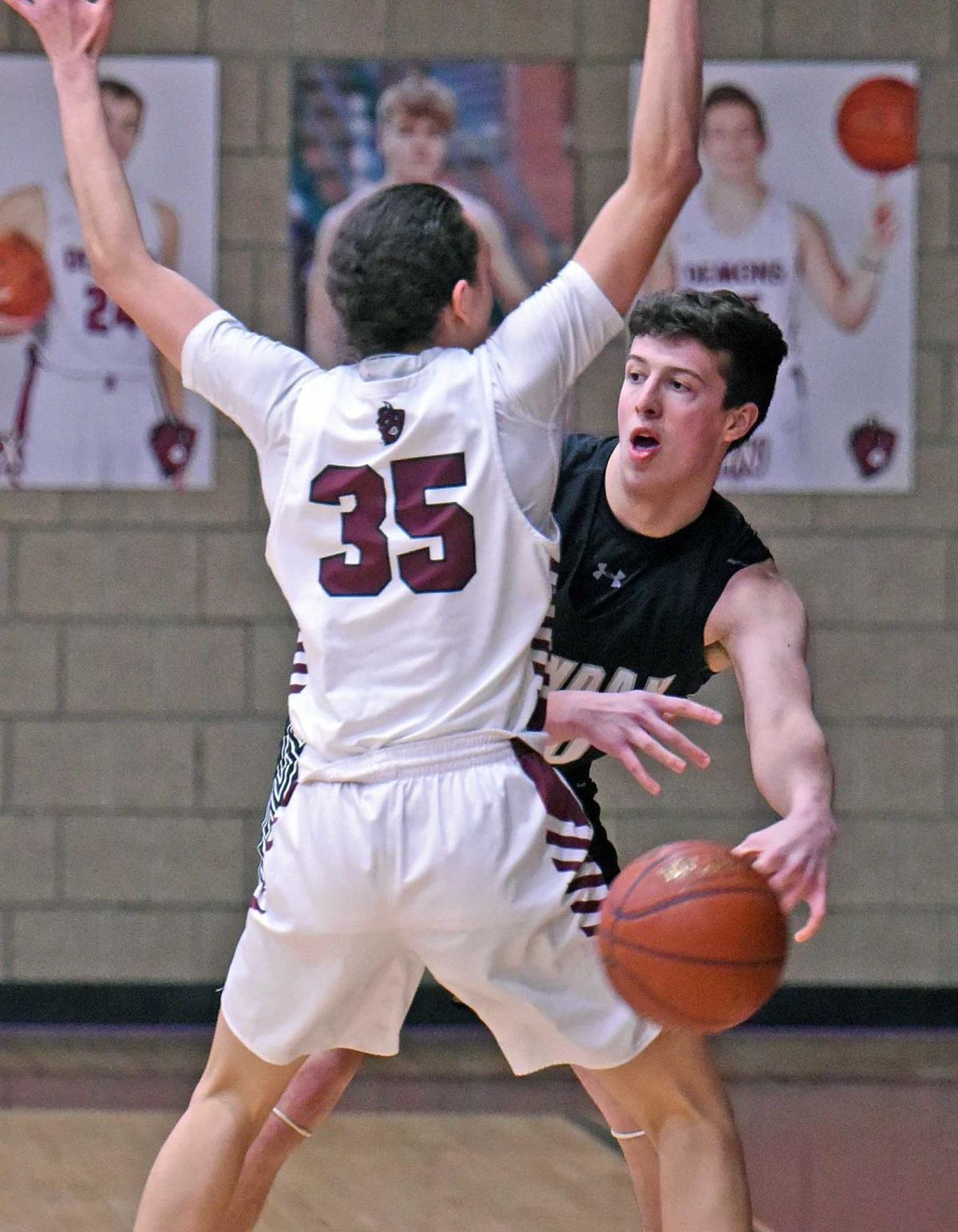 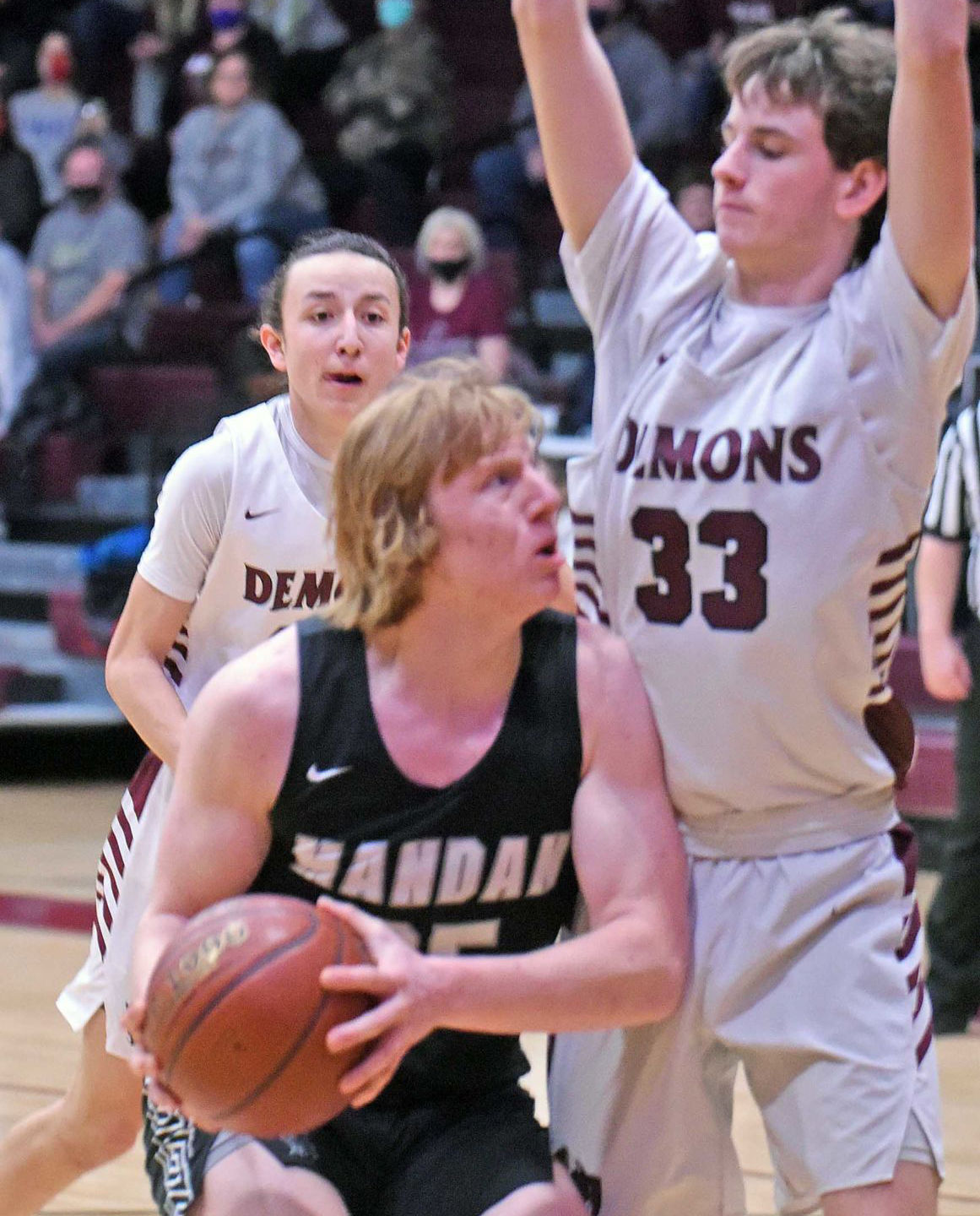 Mandan's Aaron Grubb, left, is guarded by Bismarck's Kyler Scott (33) during Tuesday night's game. In the background is George Gillette of the Demons.

Jayce Lowman sank five 3-pointers and scored 15 points in the first half.

Turns out, he was just getting started.

The 6-foot-3 senior guard poured in 38 points to propel the Mandan Braves to a 80-72 victory over Bismarck on Tuesday night at Karlgaard Gymnasium.

“There’s no words to say about what kind of player he is,” Mandan coach Brandon Schafer said. “That was a great team win, but he stepped up. He doesn’t back down when the bright lights are on out there, he’s ready to go. He sure showed up tonight.”

Lowman hit 11 of 20 shots from the field, including 2 of 4 from 3-point range, and converted nine of 16 free throws down the stretch as the Braves rallied from a 10-point deficit over the final eight minutes.

The Braves closed the game on a 17-8 run over the final four minutes.

“Mandan’s a good team,” Demons coach Jordan Wilhelm said. “They played with tremendous energy and they did a good job of slowing the pace and taking care of the basketball, especially in the second half. Lowman stepped up and hit big shots and it wasn’t just Lowman. It was different guys at different times for them, hitting big shots.

“We made some great plays down the stretch,” Schafer said. “The thing about this team, we got down nine and just the composure we played with … we had a little stretch there where we were careless with the ball, we were taking bad shots, but we just played with poise and we just grinded out possessions. I’m so proud of the guys. It’s a great win.”

Lowman had the big numbers, but eight different players scored and a lot of players made big plays for the Braves.

“Tyler (Thilmony) hit a bit 3 right in front of our bench, Jacob Pierce hit a lot of free throws, Jonathan LaFleur, great offensive rebounding -- he got two putbacks in the second half. Down the stretch, Aaron Grubb did a great job rebounding. He had a big one with about two minutes left, an offensive rebound and a putback.

“That’s a great team that we just played. That’s a state tournament team. We’re getting there. I’m really happy with where we’re at. This team has a very high ceiling, I like where we’re going.”

Treysen Eaglestaff had a big game for the Demons (13-5), finishing with 34 points. He sank 13 of 24 shots from the field, including seven 3-pointers.

He knocked down three consecutive 3-pointers and blocked a shot during a second-half run that gave BHS a 54-45 lead with 10:16 to go. Soon after, he had an assist on a Cole Jahner 3-pointer that pushed the Demons’ lead to 59-49 with 8:10 to go.

“We told the guys the last two days that Eaglestaff is one of the best players in the state. He can score, he’s smooth, he’s going to make some difficult shots,” Schafer said.

“One thing we can’t do is wait for Treysen to bail us out,” Wilhelm said. “We need to continue to trust our teammates and play team basketball because when shots aren’t falling for Treysen like tonight it might be a tough go for us. We need to find ways to get buckets when maybe Treysen isn’t doing those things.”

“We’re going to have to figure some things out. It wasn’t our best effort tonight but Mandan played fantastic,” Wilhelm said.

The win was a big one for the Braves as West Region teams battle for postseason seeding.

“We’re right in the middle now,” Schafer said. “We can’t worry about what happens around the league. We’ve just got to take care of our business, where we fall is where we end up. We’ve got to keep getting better."

Mandan's Aaron Grubb, left, is guarded by Bismarck's Kyler Scott (33) during Tuesday night's game. In the background is George Gillette of the Demons.