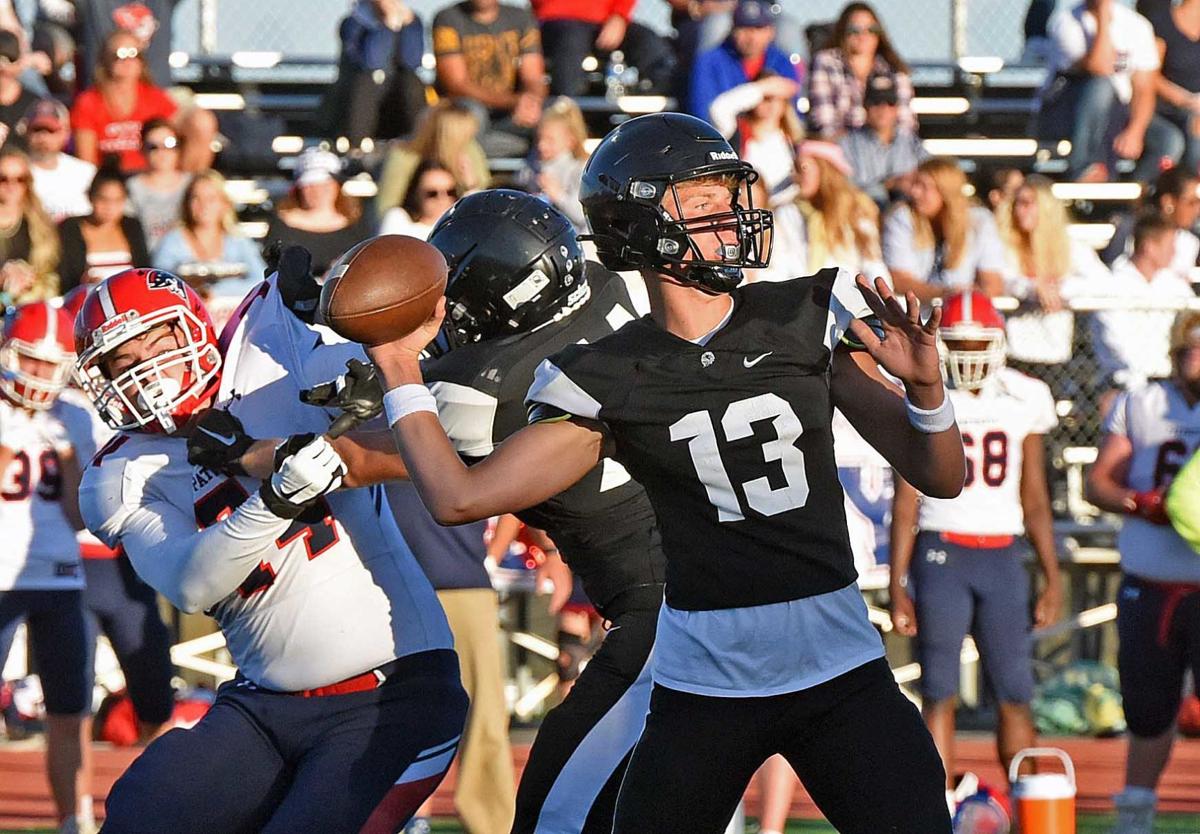 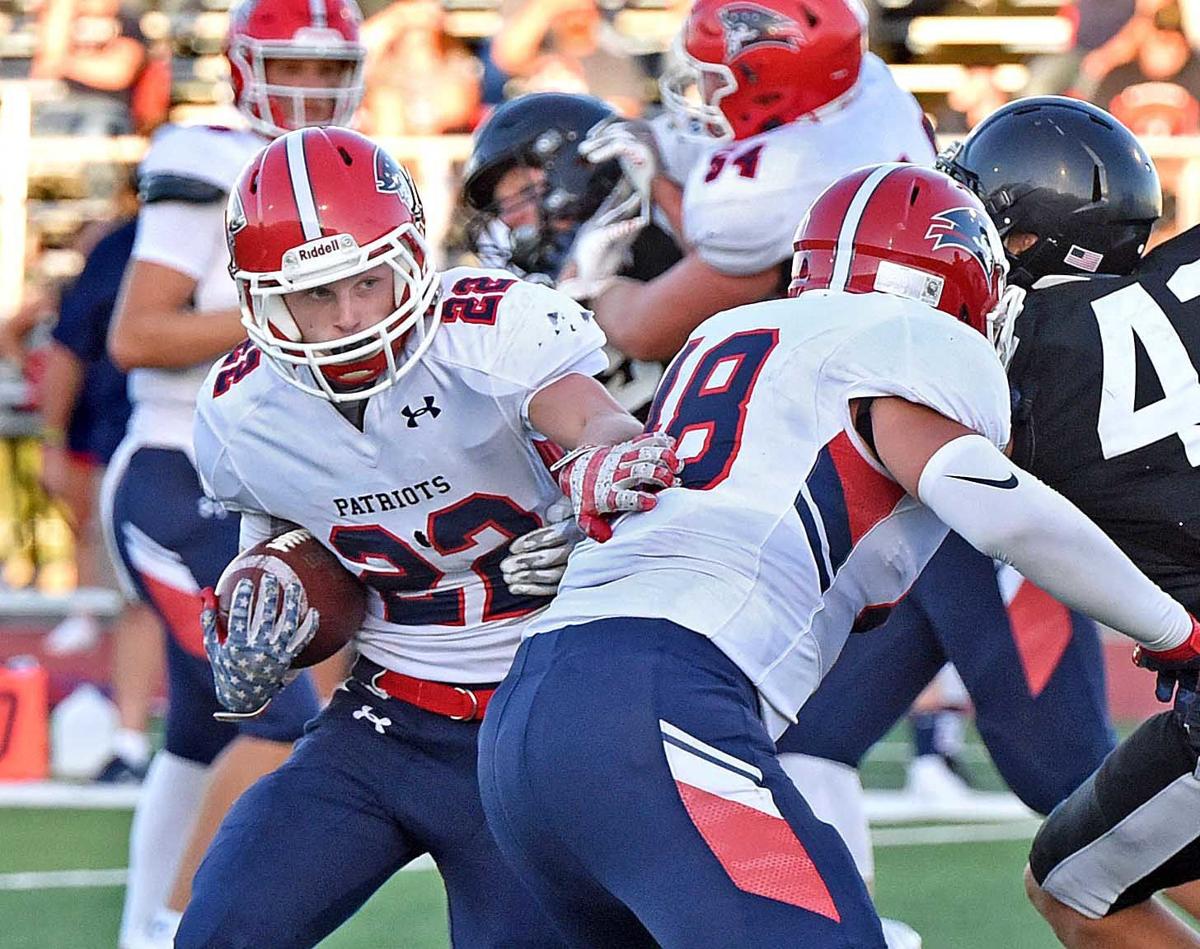 The defending state Class AAA football champion Century Patriots are off to a 2-0 start; a rocky one, but 2-0 nonetheless.

Running back Cade Garcia ran for 143 yards and two touchdowns as the Patriots beat Mandan 17-6 at Starion Sports Complex for their 14th straight win.

The Braves made it interesting in the second half by exploiting what has been the Patriots’ lone weakness -- pass defense.

“It’s kind of like last week,” CHS coach Ron Wingenbach said. “There’s things that we have to correct. One thing that’s haunting us is yards after the catch. We need to rally to the football better.”

Mandan quarterback Jayce Lowman passed for 200 of his 237 yards in the second half. He had to as the Braves’ running game netted just 17 yards and didn’t notch its first rushing first down until just 8:34 was left in the game.

“We struggled with some assignment stuff. When you’re going against kids of that stature and they’re front five, you have to execute well,” Mandan coach Todd Sheldon said. “We really just didn’t execute.”

Wade James opened the scoring with a 22-yard field goal to give Century a 3-0 lead with 5:12 left in the first quarter.

The Patriots had driven 60 yards down to the Mandan 5 on little more that Cade Garcia dive plays. Garcia had 50 yards on the drive before it stalled.

Mandan stiffened defensively and it stayed a three-point game until late in the first half. With 1:33 remaining, Garcia capped an eight-play, 45-yard drive with a 5-yard run around left end untouched into the end zone.

At that point in the game, the Braves had mustered just 15 yards of total offense, most of it from Garret Schaefbauer’s 14 rushing yards. He finished the night with 26 yards on 11 carries.

The Patriots, on the other hand, had found success on the ground mostly straight up the middle.

The Braves then went to the air and Jayce Lowman completed a 37-yard pass to Tyler Thilmony to get into Century territory.

Three players later, the pair hooked up again for 20 yards but the play was wiped out by a holding penalty and the drive ended with a punt.

Century had one last possession but that died as well when Aaron Grubb sacked quarterback Noah Schaffner.

The first half ended with Century holding a 126-54 edge in total yards and a tenuous 10-0 lead.

Wingenbach isn’t surprised that Century has had some struggles early on.

“It’s unnatural. We don’t have school on Fridays in class, it’s virtual. It's different,” Wingenbach said. “We played like that. It’s just a different year and you can tell for the kids, it’s tougher for them. That’s on the coaching staff, we have to get them ready.”

The second half started with an exchange of punts and a fumble by the Braves on the snap that left them looking at 3rd-and-19 from their own 2.

In what turned out to be the Braves’ one true flash of offense, Lowman hit Treys Tietz for 51 yards, and on the next play hit Tietz again for 41 down to the CHS 4. The senior receiver caught six passes for 172 yards.

But Century’s Ian Ely made what may have been the play of the game stepping in front of a Lowman pass in the end zone and returning the interception to the Century 45. That not only took the only momentum Mandan had in the game but led to a 12-play, 55-yard scoring drive that Garcia capped with a 5-yard run on the second play of the fourth quarter.

“We really wanted to establish balance through the course of the game,” Sheldon said. “By the second possession of the second half, I don’t know that we even thought about running other than to mix things up.”

Seven of Mandan’s eight first downs came through the air, whereas 11 of Century’s 13 came on the ground.

“Cade’s had a heck of a two-year run,” Wingenbach said. “But he’ll give credit to the guys up front, and vice versa. We’ve got to be a little more balanced with the passing game. It’ll come.”