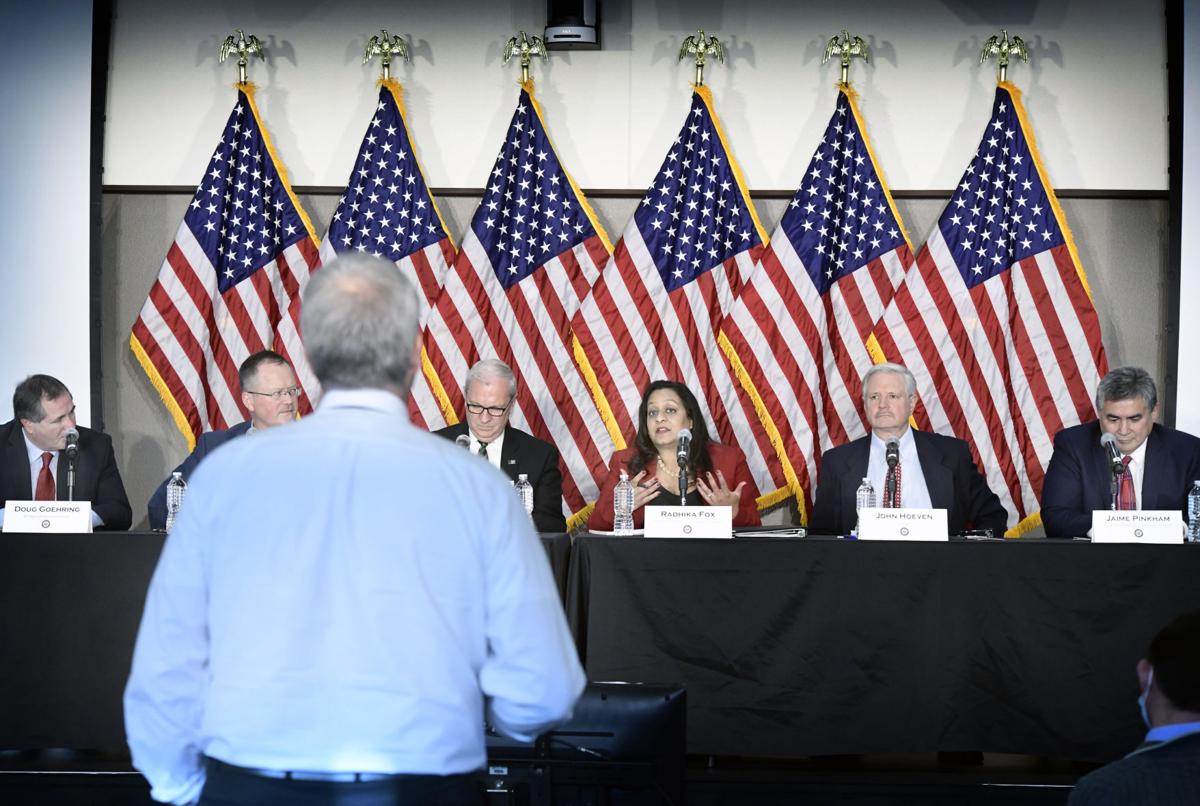 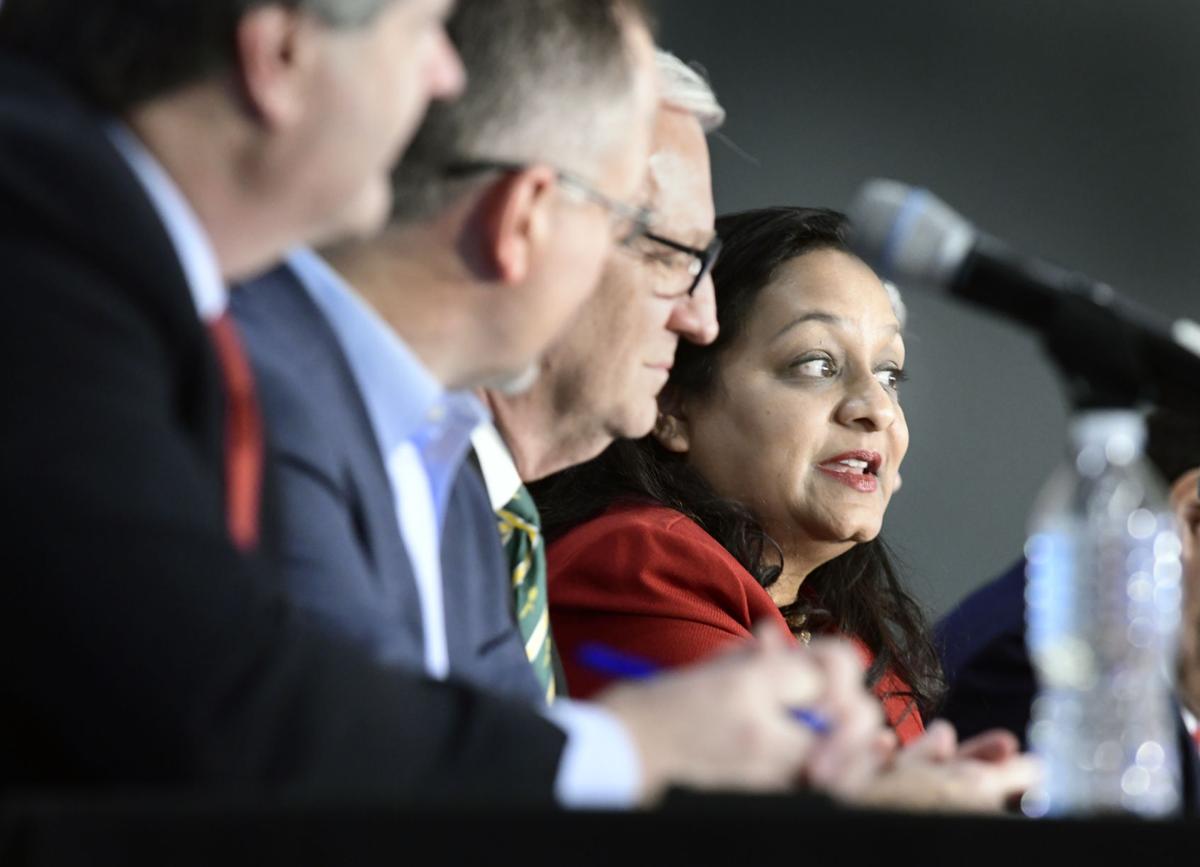 Radhika Fox, right, assistant administrator for the Environmental Protection Agency, speaks during a listening session hosted by U.S. Sen. Kevin Cramer, R-N.D., at Bismarck State College on Monday. The topic was the Waters of the United States federal regulation.

North Dakota and federal environmental officials have committed to finding common ground for a lasting waterway protection regulation after years of bouncing between Obama- and Trump-era rules.

The meeting came as the EPA and the Army last week announced a proposed rule to reestablish the pre-2015 Waters of the U.S. rule, commonly referred to as "WOTUS," with updates to reflect Supreme Court rulings. The EPA has said it will develop a final rule in the next year.

North Dakota's representatives advocated states' rights, private property rights and the need for a "fair" and "durable" rule, and decried the undoing of the 2020 Trump-era Navigable Waters Protection Rule, which a federal court struck down. North Dakota previously fought the 2015 Obama rule in federal court.

"What we do agree on is that problem-solving requires people coming together and listening to each other with open minds and open hearts, and that's what we're working on today," Cramer said.

Fox said the EPA is working to "find those common-ground, practical solutions."

"We are really committed to finding an end to this pingpong that we have seen for so long, because the truth is that the only thing that is constant about Waters of the United States is change, is the whiplash and that uncertainty does no good for anybody, and that is really our commitment, is to try to stop the pingpong," Fox said.

"That's what gave us the greatest amount of consternation," the agriculture commissioner said.

A prevalent concern raised Monday was prairie potholes, a geography of small, scattered, unconnected water bodies over much of the state.

"I have a definition of navigable: If I can drive my pontoon on it, it's navigable. If I can't, it's not," Cramer said. "I know it's a little simplistic for the bureaucracy, but it's not much more complicated than that."

North Dakota Attorney General Wayne Stenehjem led a multistate coalition challenging the 2015 rule in federal court. The EPA and the Army repealed that rule in 2019.

"I think that what we want to see is that we make sure states' rights are protected, that there's that balance between the federal government and states' rights," Seibel said.

Fox told him the EPA is "trying to find common ground" on WOTUS.

"You don't want to litigate. I don't want to have to deal with so many lawsuits on both sides. It's a waste of my time, frankly, right?" she said.

Agriculture groups asked Fox for "certainty" in a new rule.

North Dakota Farm Bureau President Daryl Lies said, "Our folks say that anything that resembles what was included in the 2015 WOTUS is a nonstarter." Prairie potholes are a chief concern, he added.

"There is no one-size-fits-all, and that's why I believe and our membership believes that states' rights must first be admitted to and left to grow and left to be implemented to make sure the states can regulate these things," Lies said.

"Farmers should not have to ask EPA or the Army Corps every time they want to plow or move dirt on their farms," she said.

After the meeting, Fox told reporters "Given that we have a rule currently proposed, I cannot prejudge the outcome of the feedback that we receive and how that will be incorporated by the two agencies."

Following 10 upcoming regional roundtables in 2022 on the proposed rule, EPA will undertake a 60-day comment period, take in the feedback, make revisions and propose a final rule, Fox said. Monday's meeting was at Cramer's request.

The feedback also will inform future regulatory WOTUS actions for EPA and the Army, she said.

Reporter Amy R. Sisk sat down with the head of the EPA when he visited Bismarck this week. Here's what he had to say about North Dakota's energy future.

The nation’s top environmental regulator indicated in a visit to Bismarck on Thursday that he's impressed by North Dakota’s efforts to capture carbon emissions from coal and ethanol plants.

North Dakota leaders expressed praise and hope for a better definition of waters of the U.S. during the Environmental Protection Agency chief's visit to Bismarck on Monday.

Radhika Fox, right, assistant administrator for the Environmental Protection Agency, speaks during a listening session hosted by U.S. Sen. Kevin Cramer, R-N.D., at Bismarck State College on Monday. The topic was the Waters of the United States federal regulation.