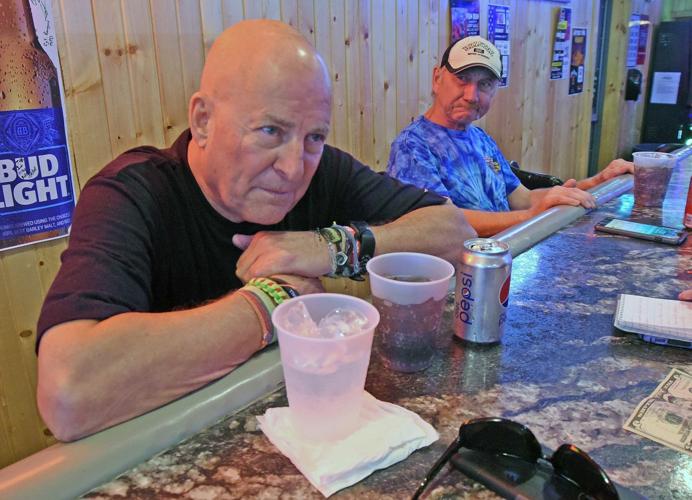 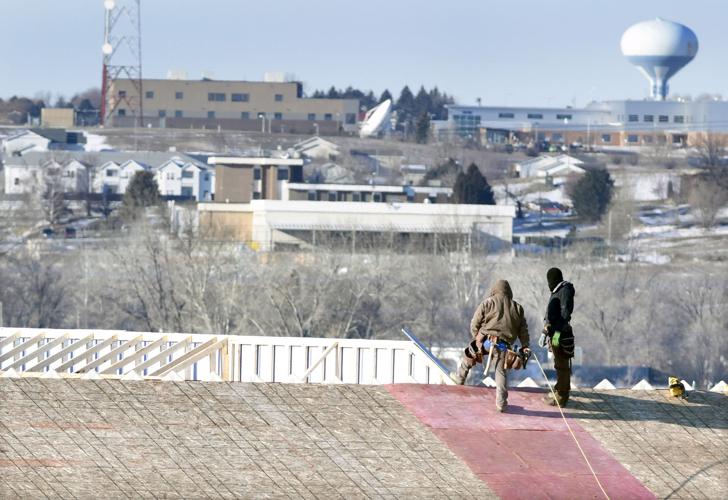 Construction workers install wood trusses on a home in northeast Bismarck earlier this month. The city of Bismarck, from Jan. 1 through Nov. 30, has issued a total of 449 residential unit permits. Of those permitted, 190 were single family dwellings. For future growth, the Bismarck Community Development Department is conducting an update of the area’s comprehensive plan titled "Together 2045 – Bismarck’s Comprehensive Plan." Information on the plan can be viewed on the city's website.

Bismarck-Mandan saw development expand in 2021 in response to the metro area's population growth, along with increased property taxes, workforce shortages, the abrupt closure of a local business and the opening of a popular restaurant.

Commissions in both cities approved property tax increases this fall for the 2022 fiscal year. Bismarck's came as part of a two-year plan to ensure city services remain financially stable. The hike amounts to about $4 million.

Bismarck Mayor Steve Bakken said that along with things returning to normal following a year of COVID-19 restrictions and prevention measures, instituting the second year of the city's budget plan to keep it financially solvent was among the most memorable things that happened this year. Looking to the future, the mayor says a waterfront development plan and the city's Together 2045 plan to guide community growth are items he sees as focuses in the coming year.

The Mandan tax increase is about $483,000. The extra funds will be put toward six new employees, including three full-time and three part-time workers, and an increase in operation and maintenance costs, among other expenses.

A property with a value of $275,000 that does not have a change in valuation will see a $25 increase in taxes. If that same property sees a 2.4% increase in value -- which was the average for Mandan homes in 2021 -- the tax increase will be about $44. A home using eight units of water per month will see a $6 annual rise in utility costs.

A location was chosen this year for a new Mandan post office. The new site is 3511 Memorial Highway SE, which is an empty lot near RJR Maintenance and Management and Midway Lanes on the Strip. The existing post office is not large enough to support regular operations, according to the U.S. Postal Service. While there is no set timeline for the project, the agency hopes to have it complete by the end of next summer.

Local school districts worked to expand their facilities to keep up with growth.

Mandan voters overwhelmingly approved an $84 million bond for two schools -- a new high school and an additional elementary. Mandan Public Schools needed 60% of the vote for the bond to pass; it received 78%. The district also will use $9.6 million of federal COVID-19 aid to help offset the property tax increase from the bond. Property taxes will go up by about $100 for every $100,000 in value.

The new high school to be built between the Mandan Middle School and the Starion Sports Complex is scheduled to open in 2024, and the elementary school, in the Lakewood area, is scheduled for 2023.

The Bismarck school and park districts are teaming up to expand the number of ice sheets in the community. The Bismarck Public School Board approved a boys hockey team for Legacy High School for the current academic year and a girls hockey team for the next, which will put a crunch on already limited ice time.

The VFW Sports Center project will add the extra rink, a concession stand, locker rooms and parking, as well as improvements to one of the two existing rinks in the building. The work is estimated to take 22 months.

BPS committed $3.5 million in federal coronavirus relief funds to the new rink, which is a little under half the cost. Bismarck hockey boosters committed $1 million. The Bismarck Parks and Recreation District's financial portion of the project under its draft financial plan is substantially larger.

The plan is to use about $1.4 million in general fund reserves, $6.35 million in revenue bonds and $2.75 million from grants, naming rights proceeds or other sources. The park district can cover bond payments within its current budget, according to Executive Director Kevin Klipfel. Some community organizations such as Dakota Junior Golf Association and Ducks Unlimited have expressed interest in providing funds but have not made formal commitments, he said.

The project is not expected to raise taxes at this time.

2021 also featured dramatic business openings and closing, as well as a labor shortage affecting employers throughout the region.

Local photography studio Glasser Images shut down abruptly in October, leaving numerous clients unsure of who would photograph their weddings or when they would receive final photos. Owner Jack Glasser wrote in an email to some customers that the pandemic forced the decision, and he also said refunds would not be offered. Glasser Images received loans of more than $500,000 from the Paycheck Protection Program, a federal effort to keep small businesses open and workers employed during the pandemic.

The North Dakota Attorney General's Office is investigating the closure and has ordered the company to preserve its websites. The company is working with an Atlanta-based vendor to make photos available to clients.

A Chick-fil-A opened on South Third Street in December, causing lines that stretched down to Expressway. Bismarck police officers helped direct traffic from the drive-thru that spilled into the street, with the expense paid by the restaurant.

The longtime Silver Dollar bar in Mandan closed June 30 after the city commission did not renew its liquor license due to concerns about "noncooperation" with police. Some residents criticized the decision.

North Dakota had more than 18,000 job openings in July, which is the most since 2015. The state has gained more than 100 businesses in the last year, according to Job Service North Dakota, though some closed or cut hours this year due to lack of staff.

Bismarck Chamber EDC President Brian Ritter said in early December that there were more than 3,300 job openings in the Bismarck area. He made the remark at an announcement for Bismarck State College's polytechnic expansion, which college officials say will help meet workforce needs.

A 53-year-old woman is charged with assault over allegations that she attacked a Mandan school bus driver when the two were stopped at a Memorial Highway intersection.

The Mandan City Commission has declared a home a dangerous building and ordered it be demolished.

A Mandan woman accused of punishing her children by putting peppers in their eyes has pleaded not guilty to multiple child neglect and abuse charges.

A monthly survey of supply managers in nine Midwest and Plains states including North Dakota indicates a higher risk for recession this year.

A Mandan couple with assistance from a neighbor were able to escape a fire that destroyed their mobile home in the Cortez Circle area.

Rachel Booth and her husband have tried without success for the past three years to have children.

Construction workers install wood trusses on a home in northeast Bismarck earlier this month. The city of Bismarck, from Jan. 1 through Nov. 30, has issued a total of 449 residential unit permits. Of those permitted, 190 were single family dwellings. For future growth, the Bismarck Community Development Department is conducting an update of the area’s comprehensive plan titled "Together 2045 – Bismarck’s Comprehensive Plan." Information on the plan can be viewed on the city's website. 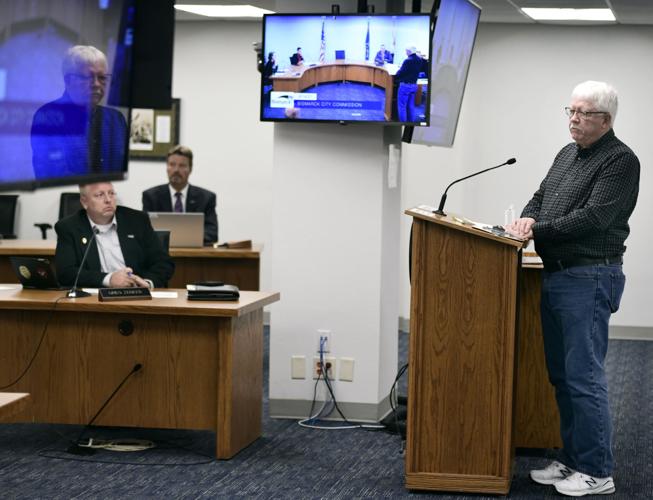 Bismarck resident Tim Fischer, right, spoke to city commissioners about the increase in his property taxes as the commission took public comment on the 2022 budget at a September meeting.

Traffic was lined up on Third Street in south Bismarck on Dec. 2 for customers going to the Chick-fil-A restaurant that opened at 6:30 a.m. for its first day of business. The anticipated opening drew customers from around the region, with Bismarck police monitoring traffic flow in and out of the location outside Kirkwood Mall. Chick-fil-A paid $43 per hour per officer for police assistance in directing traffic, according to the police department.