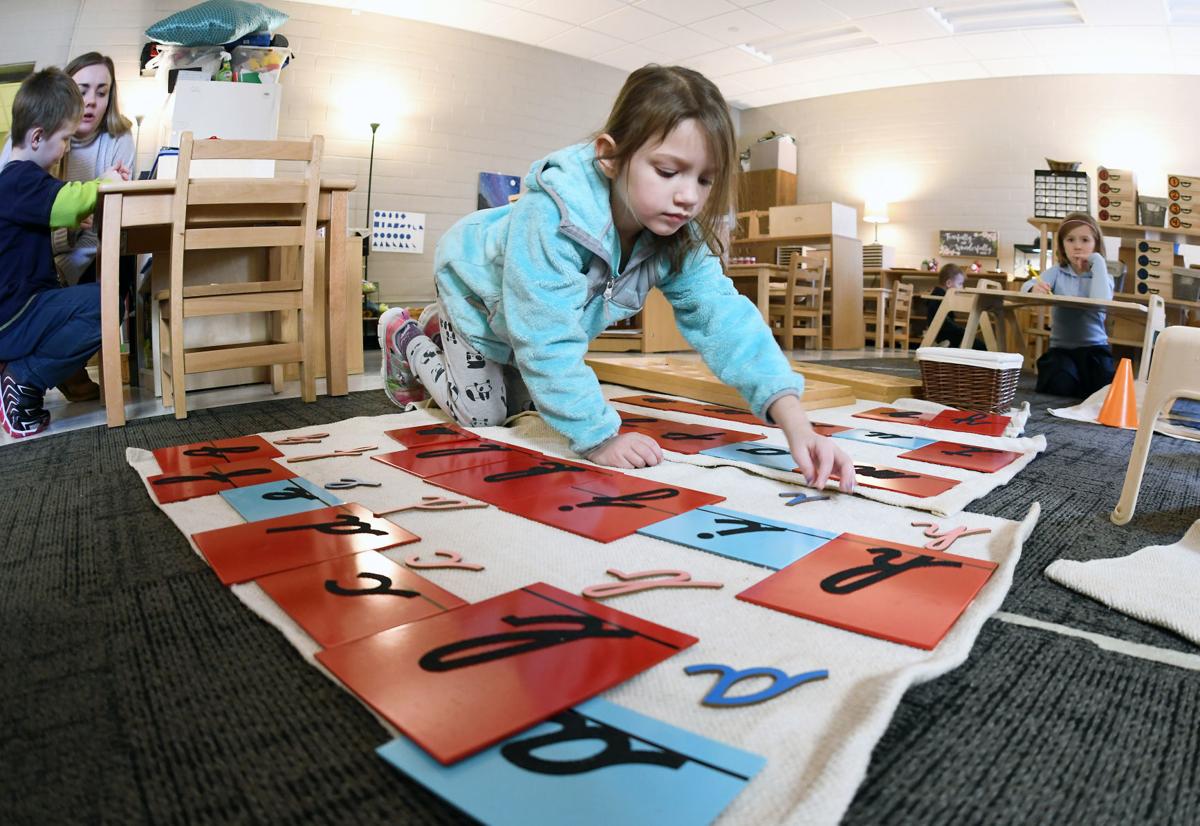 Amelia Moch, 5, learns the alphabet with cursive letters during class time earlier this week at St. Joseph School in Mandan. The Catholic school has recently transitioned its educational curriculum to the Montessori method of learning. To the left is Alex Nearing, head guide for the Children's House program, helping another student. 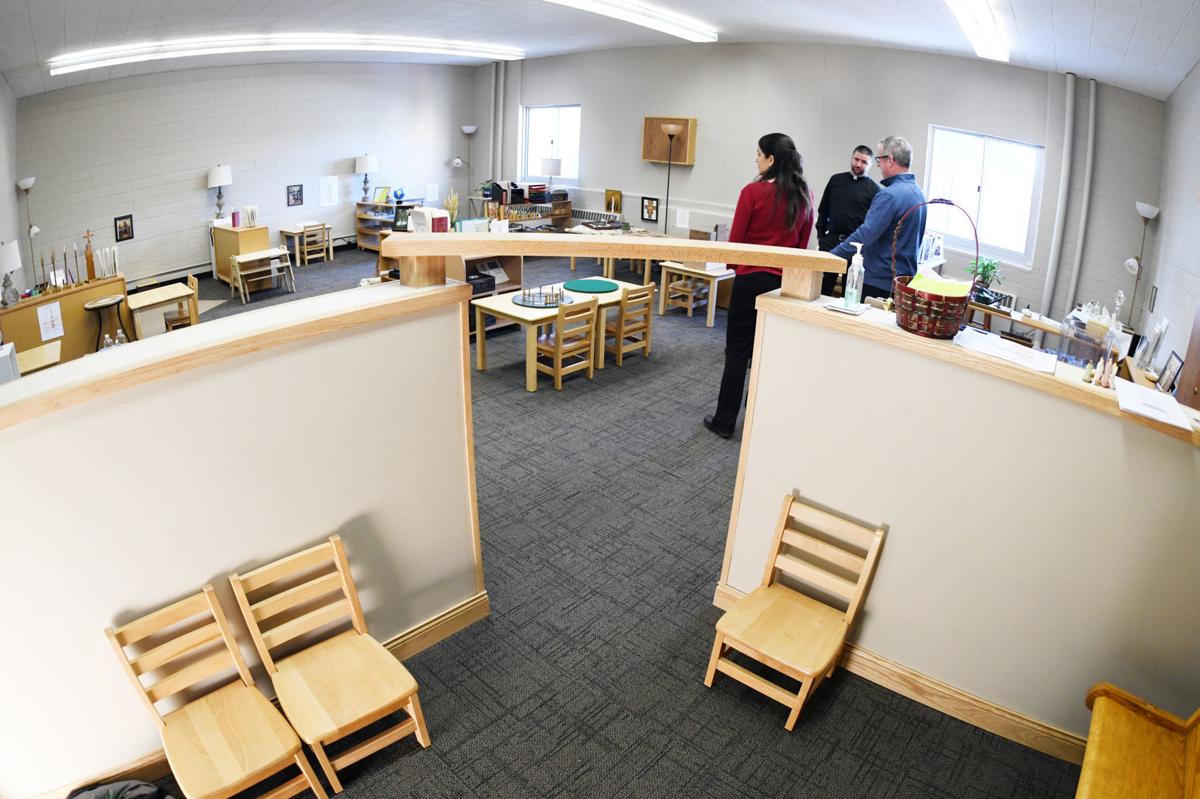 Angela Flores, the Rev. Josh Waltz and David Fleischacker look over the religious and educational activity stations under the design of the Montessori educational philosophy at St. Joseph School in Mandan.

Leaders at St. Joseph School in Mandan hope that starting a Montessori program to offer a more hands-on approach to education will boost student enrollment, just as it did for Christ the King School across town.

“For decades, we just haven’t really seen an influx in our school,” said the Rev. Josh Waltz of St. Joseph Catholic Church, which is connected with the school.

The school started a Montessori program last fall for its youngest children, ages 3-6, and it plans to expand the effort to cover all grades next school year. It also will add an “adolescent” program covering traditional junior high grades 7-9.

Christ the King began offering a Montessori-based education about four years ago amid a dwindling number of students, and school officials told The Bismarck Tribune last year that the program is so popular that they now have a waiting list with 100 names on it.

Through Montessori, teachers serve as “guides” to students, who have more autonomy than in a traditional classroom setting to determine what and how they study. Much of it is hands-on.

Waltz said he visited what’s known as the “Children’s House” at Christ the King several years ago to observe the school’s youngest children in a Montessori setting.

“I was so captivated by this environment in which the children were learning,” he said. “I am 100% sold that it is the way to educate a child.”

He was struck, in particular, by the life skills the kids learned as they went about their academics.

For example, at one point, the students were using a chain of beads to learn how to count. One boy took the chain and hid it. He eventually fessed up to what he’d done when the other children realized it was missing and asked who had it last.

“He said, ‘I thought it would be funny,’” Waltz recalled. “They were like, ‘It’s not funny, where’s the bead chain?' And he went and showed them where he hid it, and they hung it back up.”

It was a lesson in discipline that didn’t require any intervention from a teacher.

Students at St. Joseph will be grouped not just with others in their grade but with classmates in surrounding grades. That’s done intentionally as a way for younger students to learn from older ones, and for older students to take the younger ones under their wings.

Students will spend larger blocks of time focused on single subjects during the school day, rather than hit each subject every day. Within the course of a week, they’ll have spent time on every subject.

“That’s how they master something,” St. Joseph Principal David Fleischacker said. “They need that time.”

Focusing on subjects over longer blocks of time helps students become serious problem solvers when they get older because “they get how the perseverance leads somewhere,” he said.

St. Joseph and Christ the King are sometimes viewed as rivals, but leaders at both schools see the Montessori approach as a partnership, Waltz said.

For example, neither Catholic school in Mandan teaches junior high-age students, but St. Joseph plans to offer Montessori instruction for grades 7-9, with the idea that sixth graders from either school could filter into that program and later move on to St. Mary’s Central High School in Bismarck. Many students who start out in Catholic school in Mandan switch to public school after they finish sixth grade, according to St. Joseph officials.

St. Joseph is accepting registrations now for the upcoming school year, and its teachers are undergoing training in Montessori to gear up for the fall. The Montessori approach to education was developed by Maria Montessori, an Italian educator, in the early 1900s. It is used throughout the world.

Angela Flores, the school’s daycare director, is in her eighth week of an 18-month program that combines online instruction and practical in-class experience to work with the school’s youngest students in Children’s House.

During a recent tour of a room, she pointed out numerous stations set up for the kids -- places where they can pull out maps to learn geography, practice using zippers and belt buckles, and use bins set up with soap and water.

"They wash their own dishes,” she said, as a young boy took hold of a scrub brush to clean his lunch tray.

The room’s head guide, Alex Nearing, said she tries to cater to individual students’ interests. She noticed that some children liked to take apart things they shouldn’t, so she now has stations designed for them to use keys and locks, as well as screws and fasteners.

The biggest change from a traditional classroom setting, she has noticed, has to do with the development of her young students’ personalities.

“They’re at their fullest,” she said.

Robert Schulte passed up a chance to play pro baseball years ago. Now a global pandemic has thwarted his chance at a taste of the big leagues.

Family Wellness in Mandan and the Missouri Valley YMCA in Bismarck will remain closed until the governor rescinds his executive order.

The organization that puts on Buggies N Blues, Mandan Rodeo Days and Oktoberfest is transitioning into new hands this year.

In response to the COVID-19 pandemic, the Morton Mandan Public Library is currently closed and has suspended bookmobile services until further…

Amelia Moch, 5, learns the alphabet with cursive letters during class time earlier this week at St. Joseph School in Mandan. The Catholic school has recently transitioned its educational curriculum to the Montessori method of learning. To the left is Alex Nearing, head guide for the Children's House program, helping another student.

Angela Flores, the Rev. Josh Waltz and David Fleischacker look over the religious and educational activity stations under the design of the Montessori educational philosophy at St. Joseph School in Mandan.