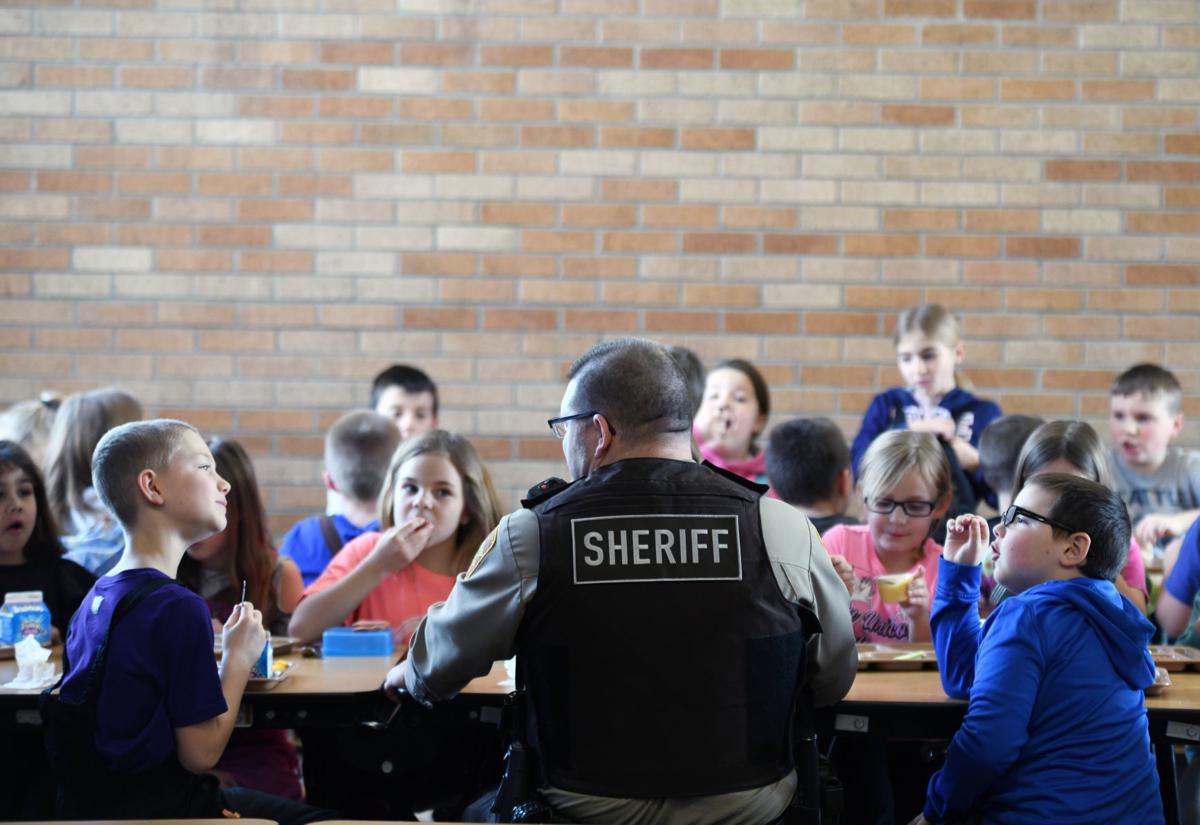 Morton County Deputy Sheriff David Tomlinson sits with a group of New Salem Elementary School students during lunch in the school cafeteria last week. Tomlinson visits six rural schools in the county as part of his duties as a student resource deputy. 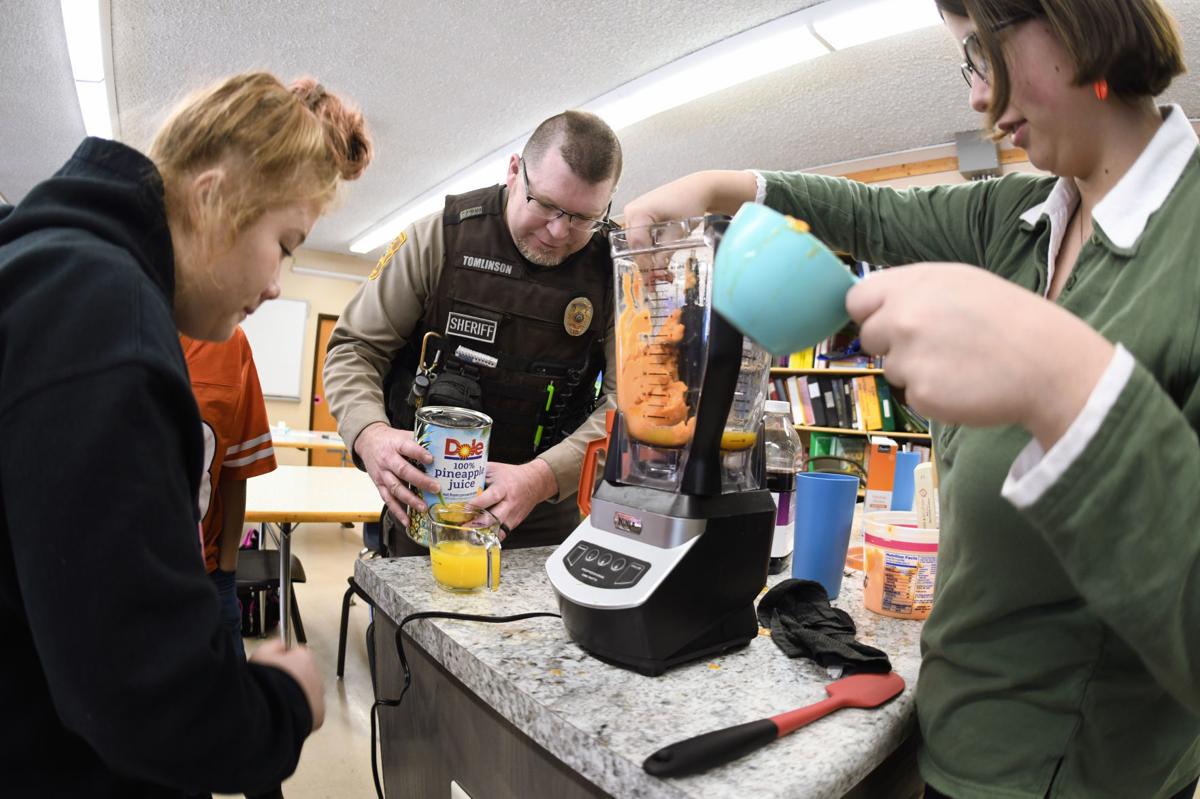 NEW SALEM -- Morton County Deputy Sheriff David Tomlinson stands out in a high school hallway, even more so in a classroom, and at a lunch table full of elementary students he can’t help but be the big man on campus.

He’s comfortable in all those places. Tomlinson -- better known as Deputy Tommy -- is the face of a new Student Resource Deputy program implemented by the Morton County Sheriff’s Office. In addition to keeping the county’s rural schools safe, Tomlinson’s job is to build relationships with students and act as a resource for teachers.

He started making rounds on Jan. 1, spending time each week in New Salem, Flasher, Glen Ullin, Sweet Briar, Hebron and St. Anthony schools. Tomlinson in just a couple of weeks has made progress on his first goal -- for students, teachers, staff and administrators to be comfortable with a law enforcement officer being in the schools.

“He’s super nice and easy to approach,” New Salem-Almont ninth grade student Erica Simpson said. “I know if I have a problem, he can handle it.”

Tomlinson will respond if there’s a threat in a school, but the program’s goals run much deeper. It’s about Tomlinson getting to know students and staff, giving presentations and maybe just lending an ear. If a student is having a bad day, for example, Tomlinson wants to find a way to make it a good day.

“It’s another outlet for them,” he said.

Sheriff Kyle Kirchmeier began planning the program in March 2018 in response to an increase in school violence around the nation. Other deputies make stops at the county’s schools, too, but Tomlinson’s regular presence is an effort for students and community members to get to know him and trust him, the sheriff said.

“I’d rather be preventive than react to incidents,” Kirchmeier said.

The sheriff opened the position internally and said he hired Tomlinson because he felt Tomlinson would be “comfortable in that environment with students, administration and parents.”

“You’ve got to have a special personality for it,” he said.

Tomlinson’s relationships with students can be the key to curbing the more routine issues at schools, New Salem-Almont Superintendent Brian Christopherson said. Students know what’s going on in school, and if they trust Tomlinson with information about an after-school fight, for example, he’ll be able to head it off.

“I don’t want him to be a tough guy,” Christopherson said. “He’s here if we need him, but it’s still administration’s job to discipline students.”

It’s important for students to trust and understand the role of law enforcement, Christopherson said, and that's something he wants them to carry into adulthood. Teachers are making plans to have Tomlinson make presentations on topics such as seat belt safety, bullying, and drug and alcohol abuse.

“Anytime we can bring outside resources in, we want to do that,” Christopherson said.

Tomlinson, 40, has 17 years of law enforcement experience, including special training though the National Association of School Resource Officers. He’s served as a student resource officer in Mandan and was with the Mandan Police Department prior to that. He still stops in at Mandan schools to follow up on the students there, and now he’s looking forward to building similar relationships in the smaller schools.

“They’re perfect for what we want to do,” he said. He looks forward to seeing what students such as Simpson -- who is eyeing a career in law enforcement -- do after they graduate.

“It’s cool to see a kid with that much enthusiasm,” he said.

Each school can utilize the program as they choose. The sheriff's office is funding it this year. Kirchmeier will meet with school officials in March to review the program and the funding required to continue it.

Tomlinson will assist in sheriff’s office investigations when school is not in session. His reception at the schools has been “really good,” he said, and he sees the opportunity in the next few months to lay solid groundwork for next year.

“I hope when we start in the fall it will be an easy transition and we hit the ground running,” he said.

A new program at Mandan Public Schools aims to develop a habit of parents reading to their young children before kindergarten.

Saturday Night Live cast member Cecily Strong wore a vintage outfit in a skit this weekend that the show purchased from a Mandan woman.

Lambing is underway for a New Salem-area family. Sheep are a multipurpose livestock, providing meat and wool products.

Morton County Deputy Sheriff David Tomlinson sits with a group of New Salem Elementary School students during lunch in the school cafeteria last week. Tomlinson visits six rural schools in the county as part of his duties as a student resource deputy. 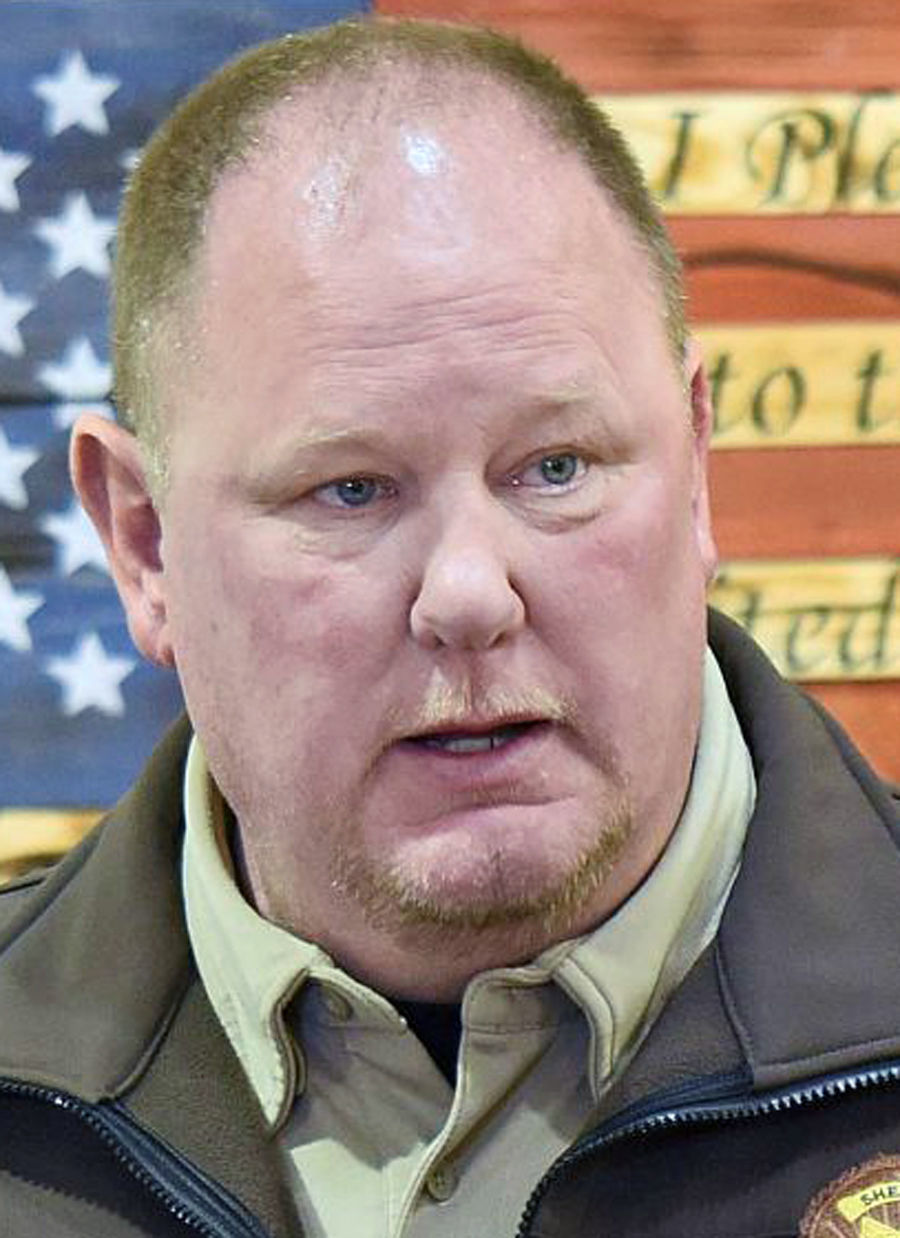