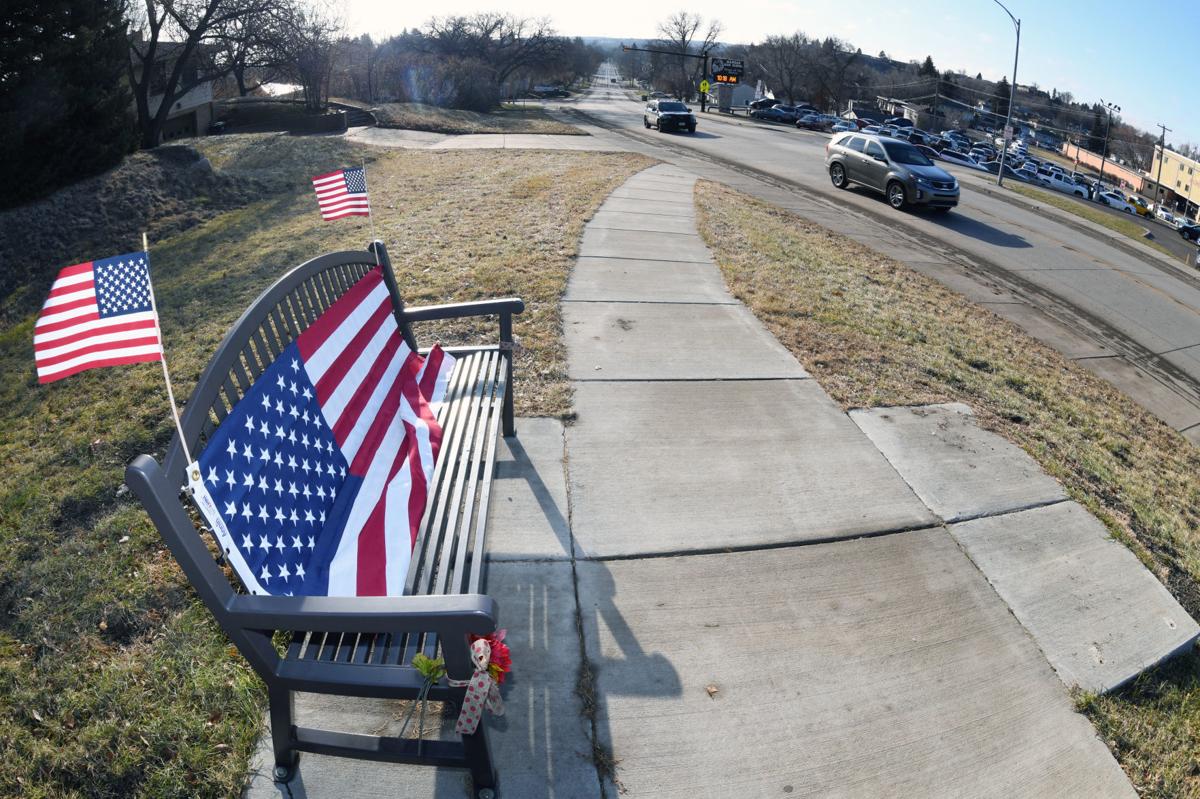 The park bench where Crawford Peltier would sit to wave an American flag at the passing traffic on Sunset Drive across from Mandan High School is now decorated with Old Glory. Peltier died Nov. 6 in Fargo. 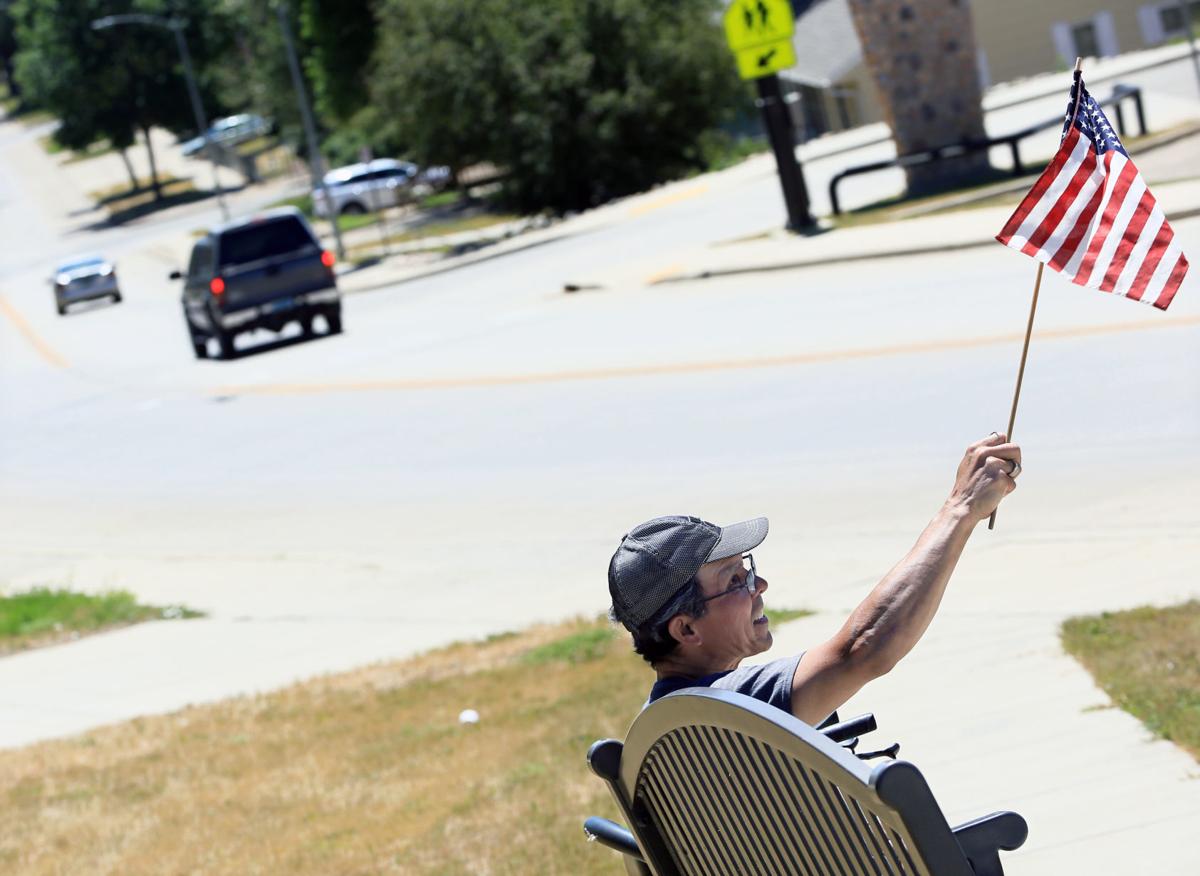 Crawford Peltier, 54, waves a small American flag as he greets each passing vehicle while sitting on a park bench on Sunset Drive across from the Mandan High School on June, 12, 2017. 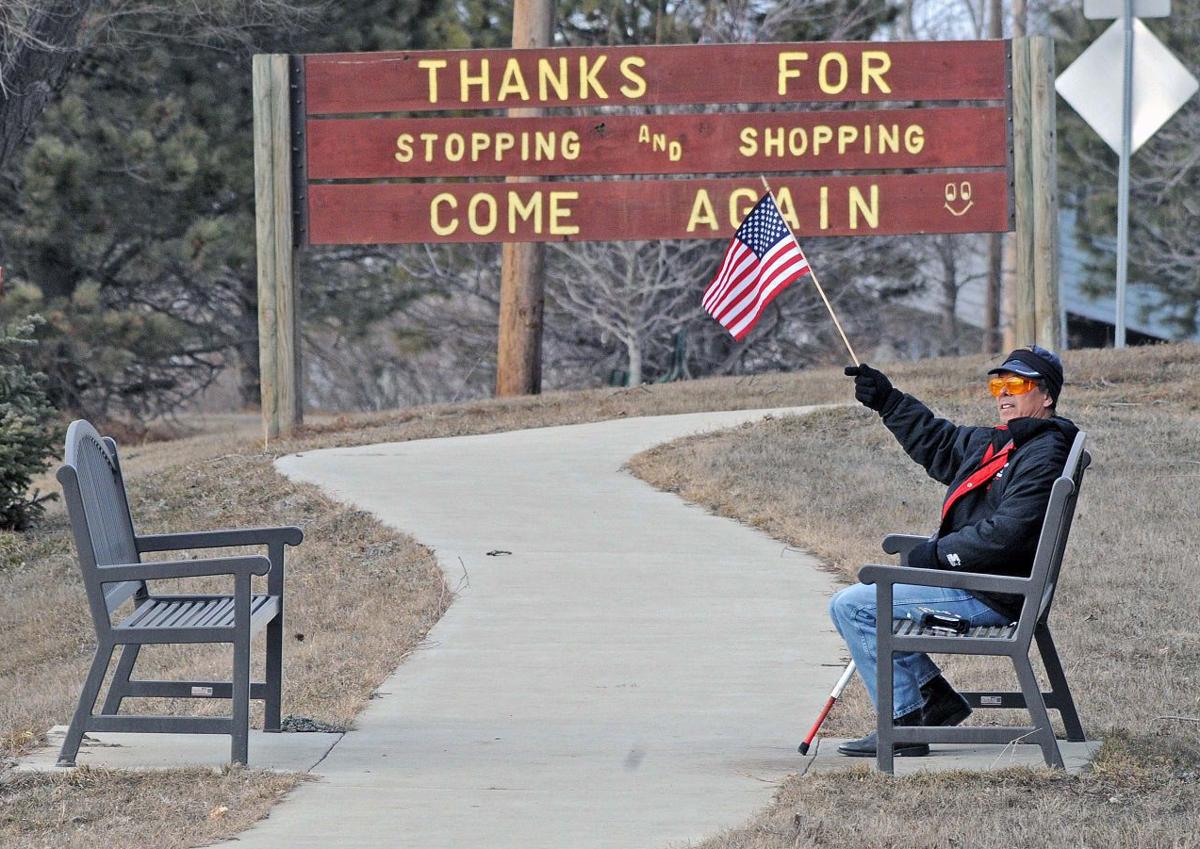 For a number of years Crawford Peltier waved to motorists on Sunset Drive from a bench across from Mandan High School. "Whenever it's nice out I wave to everybody and anybody," he said. "It gets me out and in the fresh air." 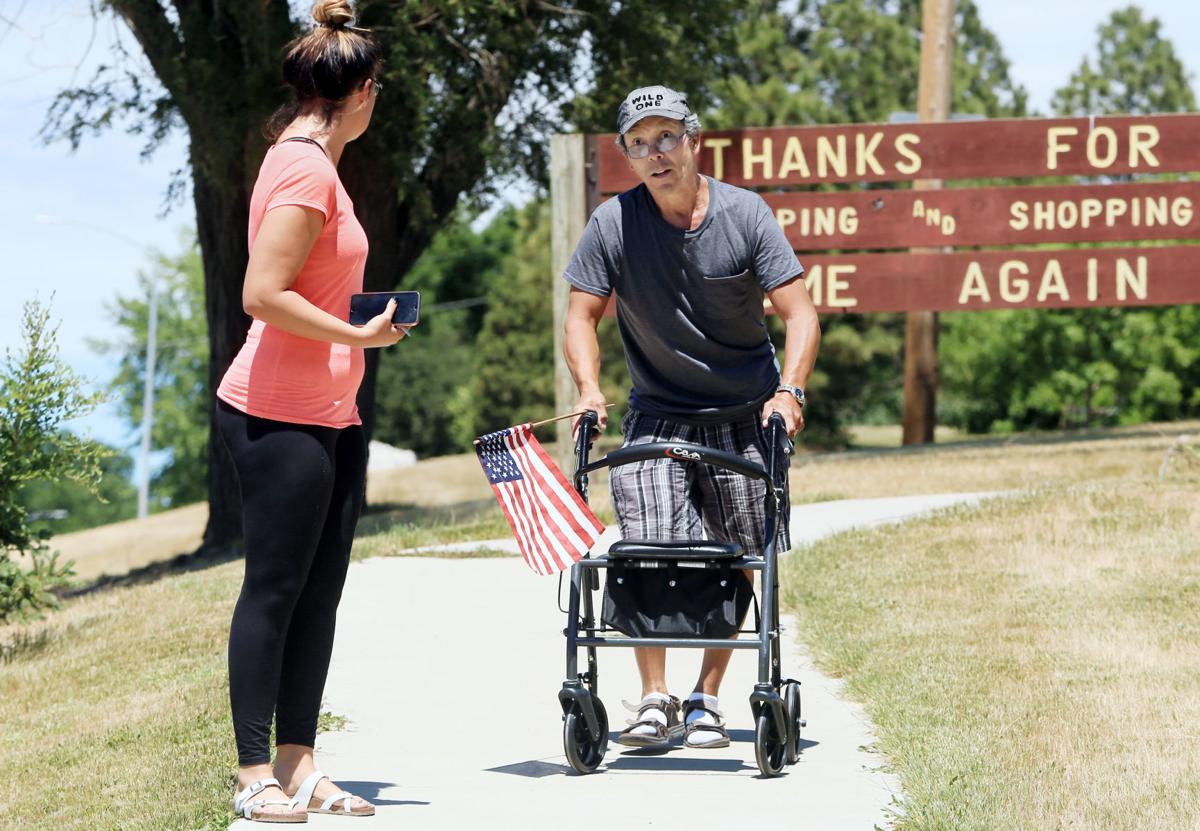 Hallie Werner, left, a care provider with HIT Inc., walks with Crawford Peltier to a park bench he used to sit and wave to traffic going by on Sunset Drive across from the Mandan High School on June 12, 2017.

A man who became affectionately known as the "Mandan Greeter" due to his hobby of greeting vehicles passing on a busy street with a wave and a "yee haw!" is being remembered after his death with flags and a plaque.

Crawford Peltier, who had health problems stemming from a head injury he suffered about 30 years ago, was 56 when he died in Fargo from Lou Gehrig's disease earlier this month. Many Mandan residents remember him for bringing smiles to their faces.

"The way society is right now, it's so divisive and people are against each other on certain topics. Crawford was a good symbol of not having to be like that," said Capt. Patrick Martin, president of the Mandan chapter of the International Association of Firefighters.

Peltier's funeral is Monday at St. Ann's Catholic Church in Belcourt, the Turtle Mountain Indian Reservation community where he was born. Burial will be in the church cemetery. In Mandan, an American flag drapes over the bench from which he greeted motorists, and officials are planning a plaque in remembrance.

Peltier was born Jan. 8, 1963, to George and Sarah Peltier, both of whom died when he was about 20. He grew up on the reservation, hunting with his dad and brother in the Turtle Mountains and fishing its lakes during the summer and winter months.

The reservation had a roller rink, where the small, roughly 130-pound Peltier would perform tricks to music as a high school student, according to sister Geraldine LaRocque.

"People would often watch him skate because he was so agile," she said "He could even do flips."

Peltier earned a GED diploma from the local community college, then moved to Oregon with friends and worked odd jobs before moving to live with an uncle in St. Paul, Minn. He began studying to become a bricklayer, but his training was cut short when he suffered a brain injury in 1983, causing him to become legally blind and suffer from short-term memory loss.

"It was traumatic," LaRocque said, without elaborating. "We didn't know if he was going to make it."

Peltier stayed at a hospital for five months.

"We went and picked him up for Easter and then we just kept him," LaRocque said.

Peltier lived with his sister and her family on a ranch between Belcourt and Dunseith. He helped his family, hauling water to livestock, feeding chickens and cleaning a barn. During family events, Peltier was a hit with the children.

“Even though he was kind of handicapped because he had a limp, he’d always do stuff,” LaRocque said. “He’d want to race and he was a practical joker; he would pretend he was a dog, and he’d start barking and biting at the little kids’ ankles.”

Peltier never lost his drive for adventure, and after 12 years, he decided it was time to try living on his own. He couldn't make a go of it in nearby St. John, but in 2000 he found his way to Mandan.

Peltier first lived in Dakota Pointe, a group home assisting people with brain injuries. There he met Loretta Dunn, who would become his caregiver.

“He would listen to me. Nobody else would work with him because he wouldn’t do what he was supposed to,” Dunn said. “You’ve just got to reason with him, otherwise he’d just be stubborn and (say), ‘Nope.’”

After an unspecified "incident," Dakota Pointe moved Peltier to the Lewis & Clark Building. The group home asked Dunn if she could look after him after her work shift, and she accepted. She later moved him to an apartment along Sunset Drive, where he would become known as the Mandan Greeter.

Peltier also settled on a job. After working at Taco Bell and the now-closed Central Market grocery store, he joined the Dairy Queen staff as a dishwasher, a role he held for eight years.

Peltier always made customers and employees smile, according to Dairy Queen Day Manager Haley Kramer. He kept mints in his pocket to share with co-workers and would cheer them up by calling out, “easy money,” or “are you working hard, or barely working?” she said.

“If he was out in the lobby, he was welcoming every customer who came through the door, or he would be standing out front thanking everybody for coming in,” she said. “He was always in good spirits. He kept it light here.”

He also began waving an American flag to drivers passing by Mandan High School on Sunset Drive and greeting people while standing outside his apartment, chewing tobacco -- a hobby he picked up during his teen years at Turtle Mountain.

Dunn told him no one could see him from his apartment. He responded, “Oh yeah they can, they’re waving back,” she recalled, laughing.

Peltier took heed, though, and started greeting people from a bench by Sunset Drive, waving his flag and calling out “yee haw!”

He was committed to the new role. He would start greeting people before his 11 a.m. Dairy Queen shift and continue after finishing at 2 p.m. He sat on the bench on weekends, too. Early on, the bench was across the street, and a worried Dunn asked the city to place another one closer to his home.

“I asked if they could put a bench right down there so he couldn’t get hit by a car. He’d run across the street,” he said. “He can’t move too fast, and that street’s a busy street.”

Peltier would be out greeting people during the winter, too, Dunn said.

But for Peltier, it was worth the effort. Drivers would honk at him as they passed. Firefighters would blare horns from their fire trucks.

Peltier became known as the “Mandan Greeter" and was even invited to take part in the 2017 Fourth of July parade. He sat on a bench on a float, threw out candy and yelled his signature "yee haw!" to the crowd.

Peltier considered Mandan his "adopted community." He enjoyed going to rodeos and concerts, and he learned to water ski on the Missouri River.

"I really do miss him. Every time I go up that hill, it's like 'no Crawford," Dunn said.

In 2017, Dunn noticed Peltier had trouble walking and would fall down. She contacted his younger sister Suzie Hill, who helped move him into an assisted living facility in Grand Forks, then a nursing home near her home in Fargo.

Peltier was diagnosed with amyotrophic lateral sclerosis, or ALS, in Fargo and a doctor this past summer told him he had only until Christmas to live.

In the final months of his life, Peltier made light of his condition, LaRocque said. He would even sing "Prop me up beside the jukebox" by Joe Diffie, a song about not fearing death. He died on Nov. 6 with Hill by his side.

An American flag is now draped across the bench where Peltier used to sit. On Nov. 19, the local chapter of the International Association of Firefighters proposed that a plaque be placed by the bench in his honor. The city commission approved the request.

"He's a simple man who just wanted people to honk and make their day," Martin said.

Lambing is underway for a New Salem-area family. Sheep are a multipurpose livestock, providing meat and wool products.

A new program at Mandan Public Schools aims to develop a habit of parents reading to their young children before kindergarten.

A Mandan woman who police say was driving a stolen vehicle that struck two patrol cars and another vehicle is charged with three felonies, cou…

A dispute between the Lonesome Dove bar and the city of Mandan over a mural appears to be coming to an end without a court trial.

The park bench where Crawford Peltier would sit to wave an American flag at the passing traffic on Sunset Drive across from Mandan High School is now decorated with Old Glory. Peltier died Nov. 6 in Fargo.

Crawford Peltier, 54, waves a small American flag as he greets each passing vehicle while sitting on a park bench on Sunset Drive across from the Mandan High School on June, 12, 2017.

For a number of years Crawford Peltier waved to motorists on Sunset Drive from a bench across from Mandan High School. "Whenever it's nice out I wave to everybody and anybody," he said. "It gets me out and in the fresh air."

Hallie Werner, left, a care provider with HIT Inc., walks with Crawford Peltier to a park bench he used to sit and wave to traffic going by on Sunset Drive across from the Mandan High School on June 12, 2017.