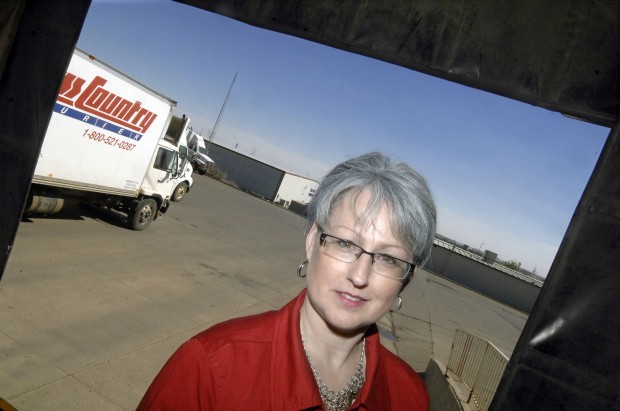 MIKE McCLEARY/Tribune Janeanne Bischke, president of Cross Country Freight Solutions, stands inside the trucking terminal in northeast Bismarck last week. With the need for more truck drivers in the Bakken oil fields, Bischke said a shortage of drivers in the trucking industry has been a problem in North Dakota for at least the last five years. 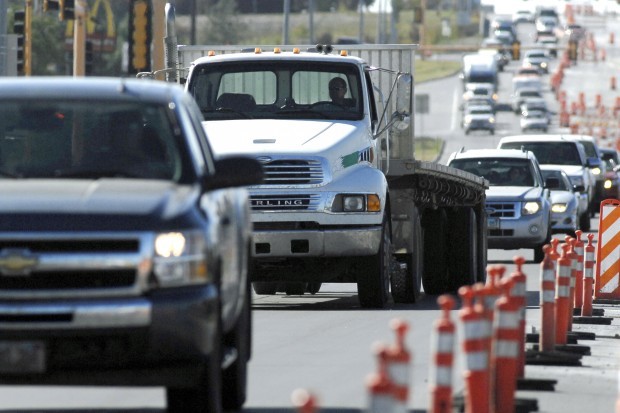 MIKE McCLEARY/Tribune With 7,000 trucking companies in North Dakota there is a high demand for class A truck drivers. But with stricter insurance regulations and high safety and experience demands, not every truck driver is hireable.

Trucking companies are facing a labor shortage exacerbated by the needs of the oil field, but its growing population has also made North Dakota a more attractive state for truckers.

“The driver shortage is probably one of our biggest concerns,” said Tom Balzer, executive vice president of the North Dakota Motor Carriers Association.

Randy Roberts, terminal manager for Midwest Motor Express in Bismarck, said companies are stealing drivers from one another and many drivers are more likely to travel an hour to the oil field to make $25 an hour.

“Especially in western North Dakota, there is a tremendous demand for Class A truck drivers (who are licensed to drive the largest semi-trailers),” said Janeanne Bischke, president of Cross Country Freight Solutions.

The industry has always had a high turnover rate, Balzer said. When he started in 2006,the turnover was at 150 percent. Now, as experienced drivers retire or take more lucrative oil field jobs, very few replacements can be found.

“It’s really been a perpetual problem for last five or six years,” Bischke said. “The truck driver demographic is aging and not a lot of new people are coming into the industry.”

When it comes to long-haul trucking, the time away from home can be a turn-off. “You’re away from your family for a long time and some people just can’t handle that,” Bischke said.

Balzer said some companies try to deal with that by changing their routes. They may build a terminal in the middle of a route so drivers are going only from Bismarck to Denver instead of from Bismarck to Dallas, for example.

Short-haul companies like Bischke’s are able to allow drivers to be home every night.

“We really do use that to our advantage,” Bischke said.

Balzer also said many high school students attend four-year universities rather than technical colleges. In North Dakota, many students who choose a trade school over a four-year degree are making as much or more than their peers after graduation, he said.

There is hope, though, Balzer said. Traditionally, North Dakota has been a freight challenge because more was shipped out than brought in. It’s a state that was not looked at as trucking-heavy, but that’s changing and companies see reasons to invest.

There are three publicly funded schools in the state, but four or five privately operated schools are coming, Balzer said.

“The more people that we can get into the industry, that understand the industry and are good quality drivers, will help,” Balzer said.

While more people in school might lead to future drivers, many coming out of school now don’t have the driving hours to get hired.

“They go to truck-driving school and think they’re going to get a job,” Bischke said.

One factor is insurance.

“We have pretty high safety standards and experience standards,” Bischke said. “Drivers’ records follow them wherever they go. All of our driver records infractions count against our company’s score.”

Bischke said some companies have their own truck-driving schools and then allow new drivers to do team driving to gain experience. Cross Country will identify people with a Class B license and will train them in-house if they show potential.

“Mostly, we struggle with getting applicants to apply for positions,” Bischke said.

She used to have 20 applicants for one position, she said. Now, an ad might run for three weeks and draw only five applicants. The company is able to hire a only small percentage of those who apply because of bad records, limited experience or failed drug tests.

Roberts said he may only get one or two applicants from an ad and he’s not going to put anybody out there who’s unsafe.

Bischke said the turnover rate at her company has improved.

“For a regional carrier like us, we like to see less than 40 percent which is still a lot but in the driving industry seems to be standard,” she said. “We’re not seeing the turnover that we were seeing in the middle of the oil boom.”

To keep up with oil field pay, Bischke has increased wages about

25 percent to 30 percent over two years. She said some drivers find oil field pay is not worth 70-hour weeks.

“We see them come back and say, ‘The money was nice but I also need to have a life,’” she said.

Higher wages affect companies’ overhead costs, however, and that leads to higher freight costs for businesses. Balzer said trucks move 80 percent of all cargo in the U.S., so a shortage of drivers has big consequences.

“It’s going to tighten up the capacity of freight and the ability to move around the state and around the nation,” he said “Rates go up and shortages starts to happen. You can’t get a truck from point A to point B without a driver sitting in that seat.”

“This is not a new problem, but it does not have an easy solution,” Balzer said. “Better pay, better routes, the better you treat the drivers, the more respected they’re going to feel and the more likely they are to stay.”

Local dining and drinking establishments are weighing or making changes to staff, menus and hours of operations.

MIKE McCLEARY/Tribune Janeanne Bischke, president of Cross Country Freight Solutions, stands inside the trucking terminal in northeast Bismarck last week. With the need for more truck drivers in the Bakken oil fields, Bischke said a shortage of drivers in the trucking industry has been a problem in North Dakota for at least the last five years.

MIKE McCLEARY/Tribune With 7,000 trucking companies in North Dakota there is a high demand for class A truck drivers. But with stricter insurance regulations and high safety and experience demands, not every truck driver is hireable.