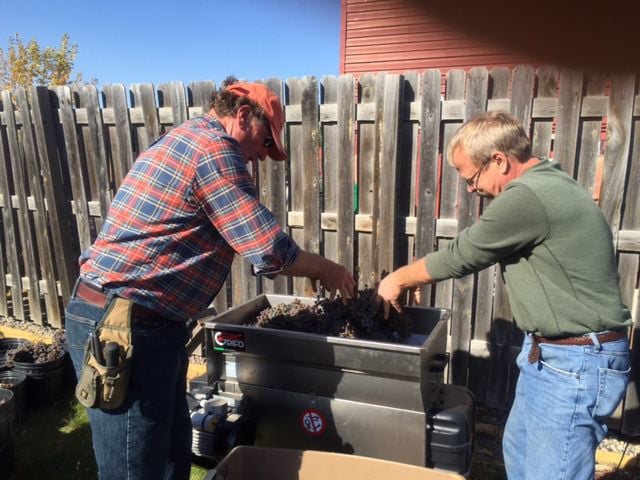 Rodney Hogan, left, owner of Red Trail Vineyard near Buffalo, and Randy Albrecht, owner of Wolf Creek Winery near Coleharbor, put grapes into a crusher during harvest at the vineyard. 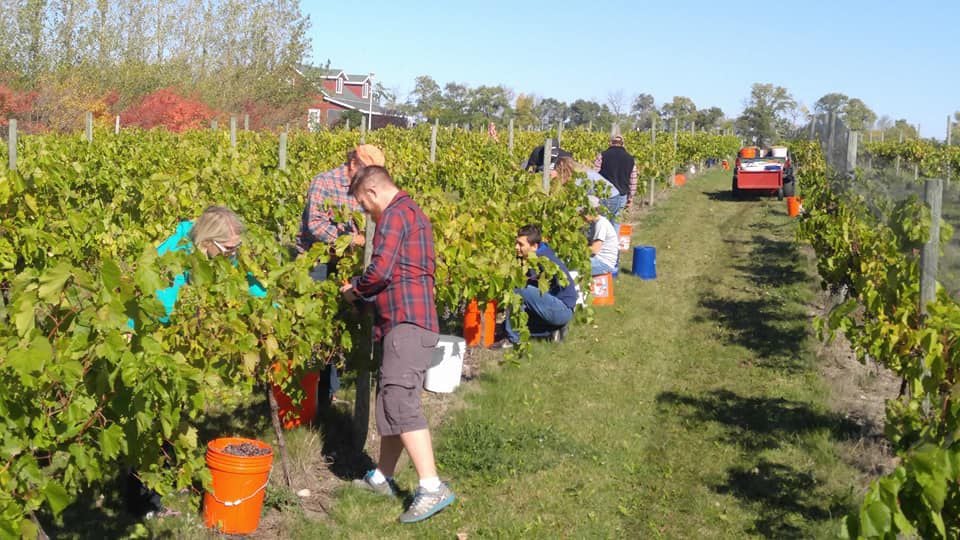 Workers harvest grapes for the 2017 season at Red Trail Vineyard near Buffalo. About 11,000 pounds of grapes were harvested, compared to 8,000 pounds last year. 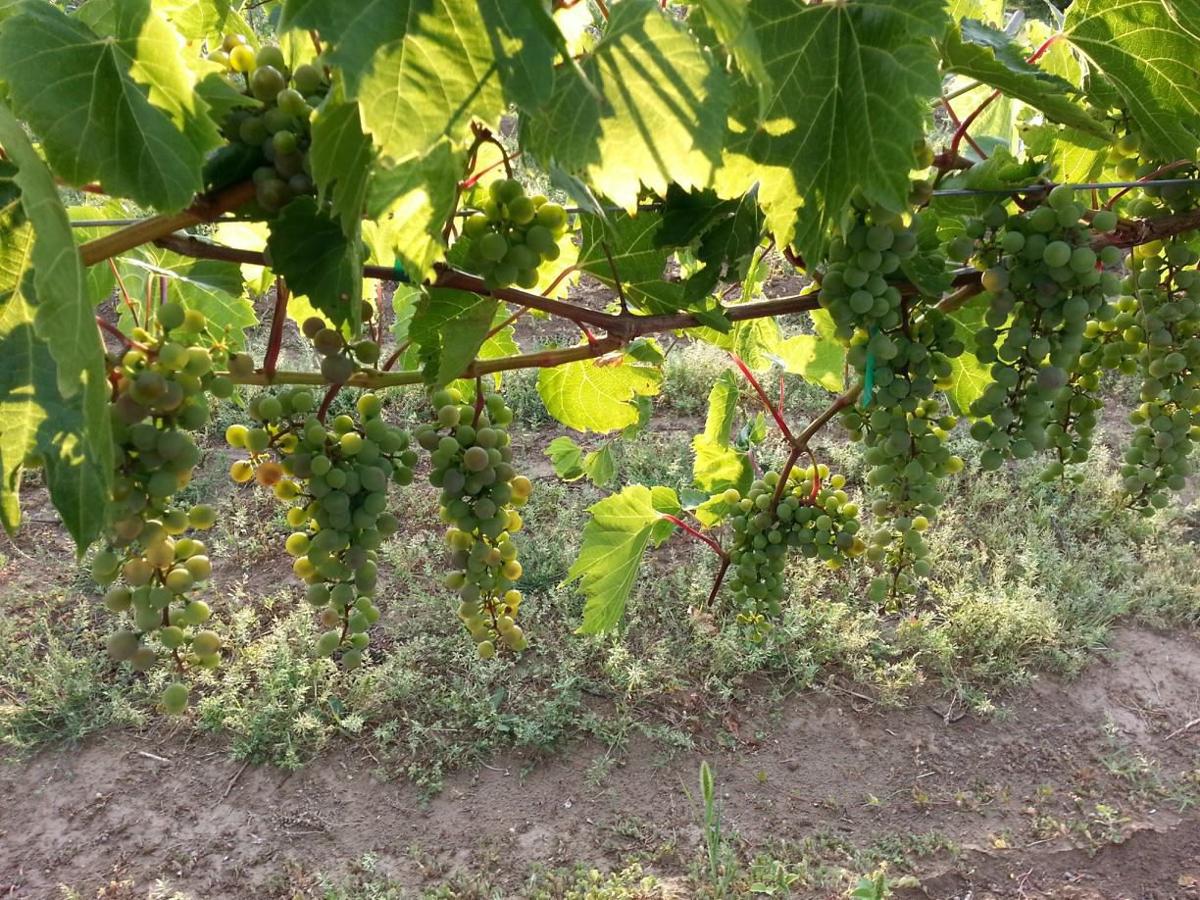 The grapes grown in North Dakota are cold climate varieties designed to survive the area’s short growing season. But when growers do get a year of heat, it actually does the grapes good, allowing them to ripen faster.

For winemaking, grapes need to get to a certain sweetness and sugar level called brix, said Randy Albrecht, operator of Wolf Creek Winery in Coleharbor. A brix level of 22.5 will make a quality of about 12 percent alcohol.

“A brix of 22 to 24 is really where we like to see the grapes,” Albrecht said. “If we harvest with less, it produces less alcohol and it’s more acidic … Let’s say it’s a cold year with an early frost and you have to harvest at a brix of 19, you only get like 10 percent alcohol and you have to add sugar.”

North Dakota’s grapes are particularly acidic but the acid drops as grapes ripen and they become sweeter.

In terms of surviving the lack of rainfall, especially out west, Kinzel said roots of established grapevines go deep, allowing them to reach the water they need.

On the Fluffy Fields property, there are about 600 plants, which provided 1,500 pounds of grapes this season.

Wolf Creek grows a few vines, mostly for nostalgia, choosing to buy its grapes off of Red Trail Vineyard near Buffalo, in the eastern half of the state where drought conditions were less.

“We’ve been a commercial winery for four years, and this is probably the best harvest we’ve seen in terms of both fruit and grapes,” Albrecht said.

Red Trail harvested 8,000 pounds of grapes last year. This year, the business took in more than 11,000 pounds. While chokecherries were difficult to find last year, Albrecht picked 1,000 pounds this year and could have picked 2,000.

“I’ve never seen the volume of chokecherries we saw this fall,” said Albrecht, adding that the apple crop looks like it will be good as well.

Kinzel said their strawberries didn’t do as well but there was a decent crop of Canadian blueberries, which will be used in the making of the 13 wines served in the business' tasting room and sold to a number of liquor stores.

“We were pleasantly surprised,” she said.

And as the wine industry in the state continues to see success, the need for fruit for wine is increasing tremendously.

There are 14 wineries in the state, many of which are planning increases in production, and three more set to come online in the next few years. And those newer wineries that have opened in the last couple years are producing higher volumes than those that started previously.

From 2012 through 2020, the wine industry has been growing and is expected to continue to grow at a rate of about 200 percent annually, said RayAnn Kilen, a consultant for the industry.

With that expected growth, the industry has concern there’s not enough fruit grown commercially in the state to be able to meet the need in the near future. Winemakers currently have to buy 78 percent of produce out of state.

To keep their license to sell their own wines directly rather than through a distributor, by their sixth year of operation they have to produce their wines using 51 percent North Dakota grown products. Recognizing a need, Kilen and industry launched an initiative this month to identify existing and encourage new growers of specialty crops, like fruit.

With a U.S. Department of Agriculture grant, Kilen is informing growers about the opportunity within the wine industry but is also highlighting other opportunities for specialty crop growers as the local foods support system becomes stronger.

Why you should know your parents' retirement plans

Why you should know your parents' retirement plans

How you can find the perfect financial advisor

How you can find the perfect financial advisor

Bank of North Dakota profits ended a 16-year streak of record profits in 2020, but the institution's head says the year was still the bank's b…

The University of Mary nursing program has been ranked No. 1 by the U.S. Nursing’s national benchmarking service, Mountain Measurements. This …

Rodney Hogan, left, owner of Red Trail Vineyard near Buffalo, and Randy Albrecht, owner of Wolf Creek Winery near Coleharbor, put grapes into a crusher during harvest at the vineyard.

Workers harvest grapes for the 2017 season at Red Trail Vineyard near Buffalo. About 11,000 pounds of grapes were harvested, compared to 8,000 pounds last year.