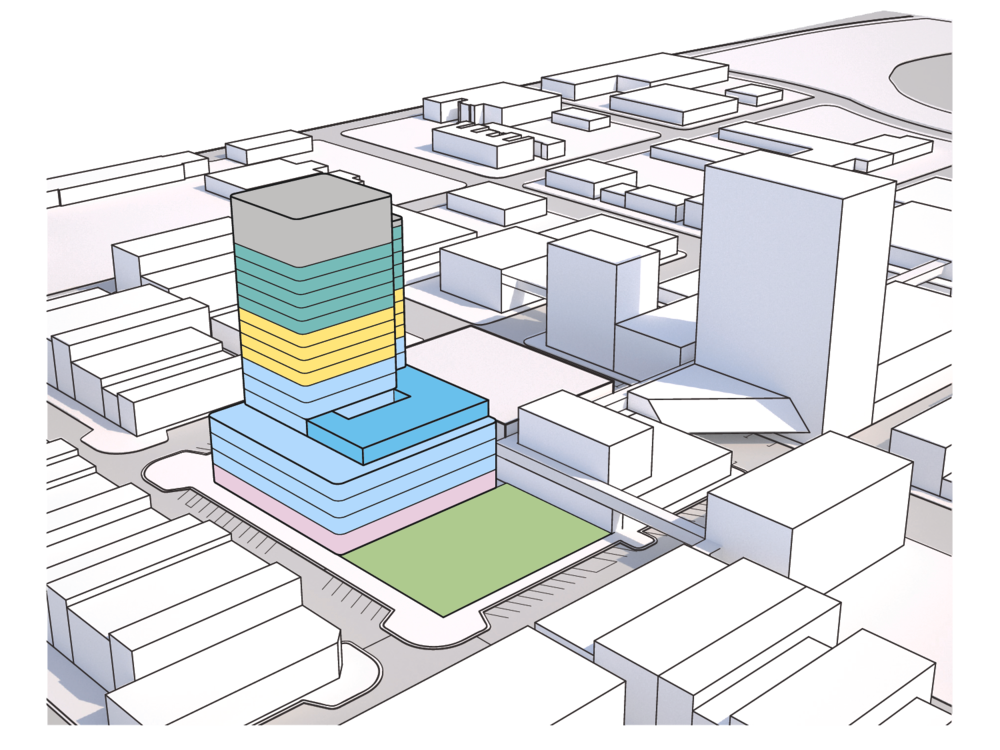 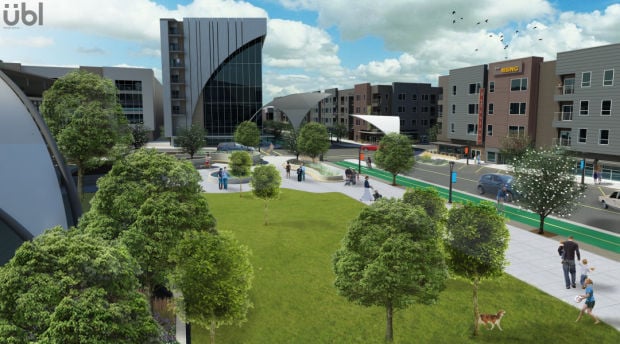 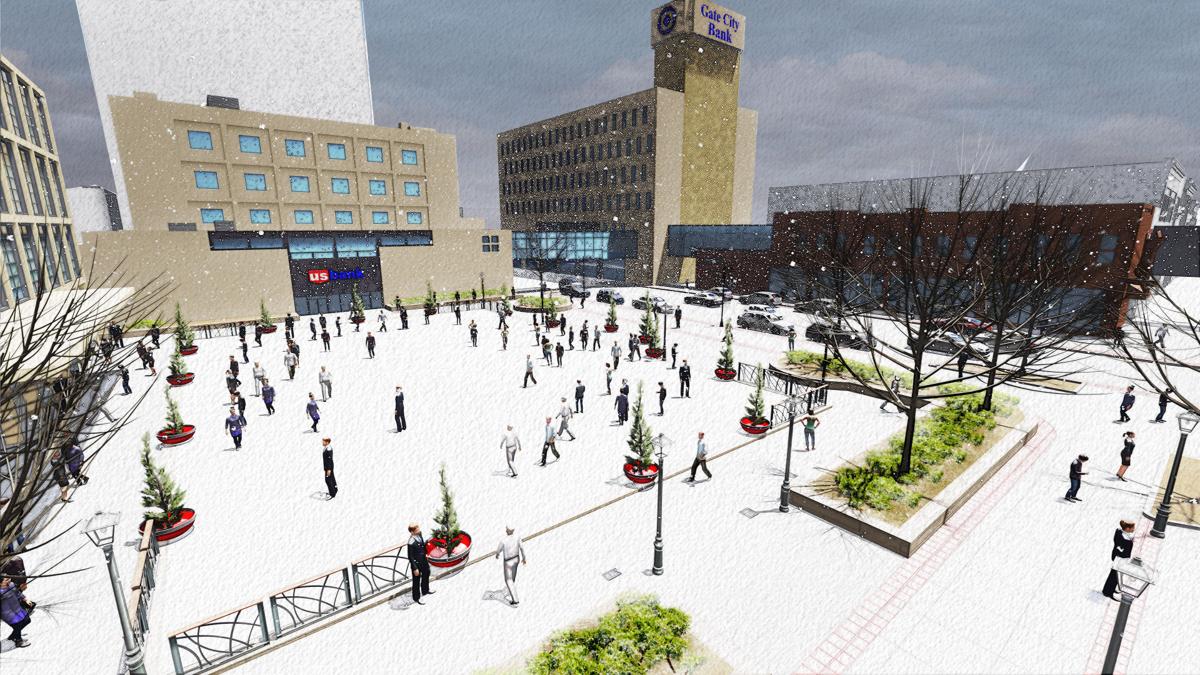 An architectural rendering of proposed updates to the U.S. Bank Plaza in downtown Fargo features an ice skating rink in winter.

The proposed FiveSouth development in Bismarck and Block 9 in Fargo have been hailed as "game changers" in their respective communities.

Fargo City Commissioner Dave Piekorn told the Fargo Forum Block 9 would be "one of the biggest projects in the history of downtown Fargo.”

And while the two projects have similarities — a hotel, residential units, community gathering space and mixed office and retail — developers say each plays to their communities' strengths and needs, taking their individual downtowns to the next level.

“I think downtown Fargo has been really revitalizing for 10 to 15 years,” said Kilbourne Group general manager Mike Allmendinger, of the additions to shopping, dining, office and living in the area. “There are many great successes already that have increased activity … and Block 9 will be contributing to those.”

To this point, Fargo's downtown has been seen as quaint, little and cute, said Mike Hahn, president of the Downtown Community Partnership.

“This takes it to the next level,” he said of Block 9, adding that the project will make the downtown more of a metropolitan city center.

One major component of the Block 9 project is that it will be the new home of RDO Equipment Co.’s corporate headquarters and 300 Fargo-area employees.

Scott Neal, president of real estate for RDO said the company wanted to show its commitment to Fargo-Moorhead and “be part of something special.”

“I think downtown has come a long way, but this is definitely another leap forward to spur other development,” he said.

Joe Delli Santi, of TMI Hospitality, which will operate the hotel within Block 9, says TMI’s investment in the project says, “We believe in downtown.”

He said they are hopeful their location and the location of RDO in the building will be the first step toward bringing other high-caliber companies to the area.

While RDO is a big coup for downtown Fargo, Bruce Whittey, of Bismarck Futures, the development partners for FiveSouth, said FiveSouth focuses more on housing and entertainment with the confidence that commerce will follow. He said Bismarck Futures saw downtown housing as a missing piece of the puzzle for Bismarck.

“I think (Block 9) is an exciting project for Fargo, but they’re further ahead on housing and entertainment,” he said.

Kate Herzog, of Bismarck’s Downtown Business Association, said, with North Dakota State University, Fargo caters better to young professionals. She said it is a growing demographic for Bismarck, and the city is making a concerted effort to build for that demographic.

“It’s a need not met yet, whereas Fargo is more used to dealing with it,” she said.

“If you compare downtown Fargo to FiveSouth, I think they’re approaching it the right way with housing first,” said Allmendinger, adding that a lot of the initial new development in Fargo was housing as well.

He said housing creates life and a buzz in downtown, retail and entertainment moves in to cater to that and that is when other businesses want to be a part of the area — when the energy is high. He said having working space in a lively downtown helps companies attract and retain workers.

Millennials like being able to walk to a coffee shop and have a meeting off site, said Hahn, adding that walkability increases face-to-face encounters with clients. More corporations are now looking downtown because they know the future work force wants that compared to being in an office park on the fringe of town, he said.

A catalyst for development

Proponents of both FiveSouth and Block 9 believe the developments will improve an underdeveloped area of each town.

In the case of Block 9, it will replace a 60-space parking lot with a mixed-use commercial tower, Allmendinger said: “It will be a great infill project.”

It also may pique interest in developing other areas of downtown, according to Hahn. Broadway, Main Avenue and Eighth Street have been the traditional streets of commerce. With Block 9, developers may look closer to NDSU along 10th Street and University Drive or along the Red River as flood control measures are built.

In both Block 9 and FiveSouth, there is a public plaza component. In FiveSouth, green space will serve as a “backyard” for the project’s apartments and Fifth Street can be closed for public events. In Block 9, it is U.S. Bank Plaza, which Hahn said could be modeled after Main Street Square in Rapid City, S.D., with a place for bands and a winter ice skating rink.

With the addition of flood protection, a riverside trail could be in Fargo’s future, Hahn said.

Hahn said with a project like Block 9, downtown Fargo may start pulling more visitors to the area from places such as Winnipeg, Manitoba, Minneapolis, Sioux Falls, S.D., and even Bismarck for a weekend trip.

“Tourists are tired of generic,” he said. “People want to visit areas unique to a community.”

Hahn said the hotel planned for Block 9 will allow visitors to park the car and walk. It will bring the room total in downtown Fargo to about 225.

In Bismarck, FiveSouth is in talks with potential hotel developers, Whittey said. Having a hotel's convention focus in compatibility with the Bismarck Event Center is a priority.

Herzog said the hotel at FiveSouth will help provide what meeting planners look for in convention sites — an area where attendees can eat and shop within walking distance from their hotel room and meeting space. She said, when there is a convention at the Event Center, business at the restaurants and shops downtown reflect that influx of people.

“There is definitely a need for a convention center somewhere in Fargo,” Hahn said, though where that will be remains to be seen.

But what he does know is meeting attendees want to experience the “real community,” as much as recreational visitors do. He said they don’t like being “stranded” at a remote meeting location.

Block 9 could play into that.

Hahn said while there is no one large venue for conferences in Fargo, the whole of downtown could contribute to one big convention center. Large sessions could be held at the Fargo Theatre. There is also a large performing arts center proposed and St. Mark’s Lutheran Church is being transformed into an event center. The Block 9 hotel will have 11,000 square feet of amenity space and other downtown hotels have meeting rooms that could work for breakout sessions.

Put it all together, connected with skywalks for winter, and it could work for some types of events, Hahn said.

Allmendinger said Killbourne Group is an advocate for having convention space downtown.

And when it comes to the hotel, Delli Santi said mixing hotels with condos and office space is becoming a trend, as urban areas push for mixed-use development. For example, he said there is a Hyatt in downtown Des Moines, Iowa, built that way that allows for shared amenities, including pools and fitness centers, between hotel guests and condo residents.

The final element FiveSouth and Block 9 have in common is shared private-public funding, something Allmendinger said is “critical for Block 9.”

Both projects consider tax increment financing as a way to pay for public pieces of each project, including parking structures. Block 9 also is looking at Renaissance zone funding.

While Block 9 is in discussions with Fargo on a funding package, expected to be finalized March 15, FiveSouth approached things differently, going to the city first in an effort to ensure it would have public support.

“The way they (Fargo) have developed their downtown has been different,” Whittey said. “The two commissions have two different takes. They (Fargo) have done stuff Bismarck has not wanted to do. You have to operate in the system that you’re given. We knew the city had reservations (about public funding.) We had to conform to the the way the city was thinking.”

FiveSouth has to secure both housing and hotel developers before any public funding will be allocated to infrastructure for the project.

Allmendinger said, at Block 9, they have the schematics complete. Once Killbourne Group and its partners have a better idea of how city contributions will play into their budget, they will continue with design work.

How to have financial flexibility

How to have financial flexibility

New job? The right thing to do with your 401k

New job? The right thing to do with your 401k

An architectural rendering of proposed updates to the U.S. Bank Plaza in downtown Fargo features an ice skating rink in winter.