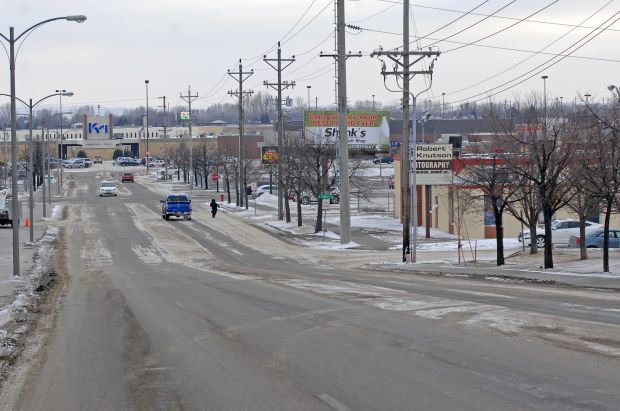 South Fifth Street in Bismarck could have a new look if development plans for the area adjacent to the Bismarck Exhibit Hall are approved. 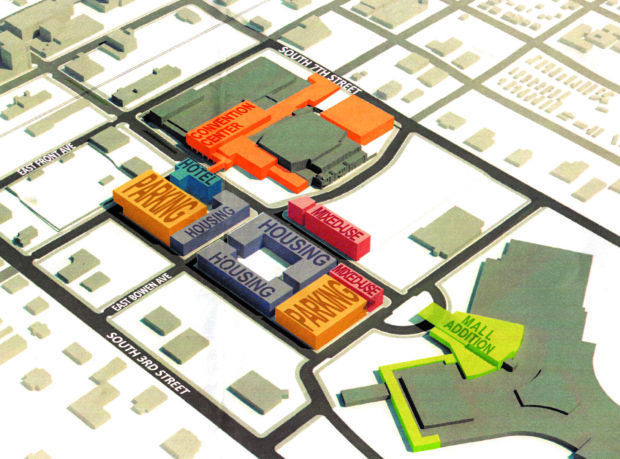 An artist rendering of proposed development near the Event Center in downtown Bismarck.

A locally led development group has plans for a downtown apartment and retail complex with attractions geared toward young professionals.

Bismarck Futures’ housing development will not only include 300 to 400 “chic” studio, one-bedroom and two-bedroom apartments. There will be health spas on the main level with potential attractions, such as a 30-foot climbing wall, boutique dining options and other things developer Don Cardon said will make the next generation want to move to Bismarck.

Attraction and retention of a younger workforce has been on the minds of city leaders and businesses since the next generation started leaving the state en masse in the ‘90s. With a booming economy, North Dakota has become more attractive in recent years to those who have moved away.

As the rest of the nation has begun its recovery from the recession, community leaders are looking for ways to keep its new-found youth in Bismarck and Bismarck Futures LLC thinks its privately funded, $350 million to $400 million, mixed-use, downtown housing and retail development will be the way to start.

“Once you get them here, it (retention) is not so much an issue,” said Rick Matteson, a spokesman for MDU Resources. “It’s getting them here.”

Matteson said people with families like it because of good schools and low crime.

“Where the rub comes is with young single professionals and some young married professionals who may not be thinking about starting a family for a while,” he said.

Matteson said MDU has had a growing need for IT professionals and accountants in recent years, and the company finds itself competing against firms in major metro areas such as Denver and Minneapolis. He said the next generation wants restaurants and entertainment and an urban atmosphere. He said the renaissance of Bismarck’s downtown in the past few years has been positive.

“You’ve got to keep building on that,” he said.

KLJ's corporate recruiting manager Michelle Miller chimed in saying Bismarck is not the same city it was in recent years.

“We are seeing many more opportunities for young professionals than were available a few years ago,” she said.

Matteson said there is still a need for a wider variety of food and entertainment and continued investment in these things would make Bismarck more competitive.

“If we wanted to attract young talent, we knew we needed to have a place they can live,” Whittey said.

Beyond housing and retail, Bismarck Futures’ development will include a hotel, parking structures to replace and add to the current parking that will be built over by the development, green space and a possible University of Mary downtown campus, which would put health profession students in close proximity to where they do their clinicals and which was part of the university’s Vision 2030 plan.

“This turns us from a nice small city to a major metropolitan player,” Cardon said, adding that the group aims to “further activate” the revitalization already taking place downtown.

Whittey said, when the group saw the downtown study, there were a lot of things they liked about it, such as the Fifth Street Corridor concept, and things the group did not like. He said the plan suggests that, if the city makes public investments, private investment will follow.

“Bismarck Industries has never worked that way,” he said. “We see it as private investment will lead all things.”

“If a project is dependent on public incentives, those incentives have a shelf life,” said Cardon, who has experience developing these types of projects with private investment leading. One such project is CityScape in Phoenix.

Cardon said the price for building a unit, with Bismarck’s higher cost of labor, will be about $150,000. The development will be made up of 60 percent one-bedroom units and 30 percent two-bedroom, with studios making up the rest. He said one-third of the apartments will be rented out at a cost equal to 80 percent of the area’s median wage. The rest will be market rate.

Cardon said the group is unsure what the public cost will be in terms of street work. He said Bismarck Futures will pay for the parking but larger sidewalks for outdoor eating space, restructuring of Fifth Street and potential re-alignment of Fourth Street will require public dollars. He said the cost will depend on what the city wants to do.

The group is also planning that a third phase of the Bismarck Event Center expansion will eventually take place, but Whittey said they will continue with the project regardless.

Bismarck Futures presented its tentative plan to the Bismarck City Commission Tuesday to garner feedback. Whittey said the group will come back in 45 days with a proposal. They expect it to be spring 2016 before a shovel hits the dirt.

Cardon said he expects the space to fill up within six months of the doors opening.

Bismarck Futures is comprised of local investors from the longstanding economic development group, Bismarck Industries Inc. and Cardon Development Group, a Phoenix-based real estate developer. The new partnership formed when they found themselves with converging goals related to developing the Fifth Street Corridor laid out in the 2013 Downtown Bismarck Sub-Area Study.

“This turns us from a nice small city to a major metropolitan player,” Cardon said, adding that the group aims to “further activate” the revitalization already taking place downtown.

South Fifth Street in Bismarck could have a new look if development plans for the area adjacent to the Bismarck Exhibit Hall are approved.

An artist rendering of proposed development near the Event Center in downtown Bismarck.