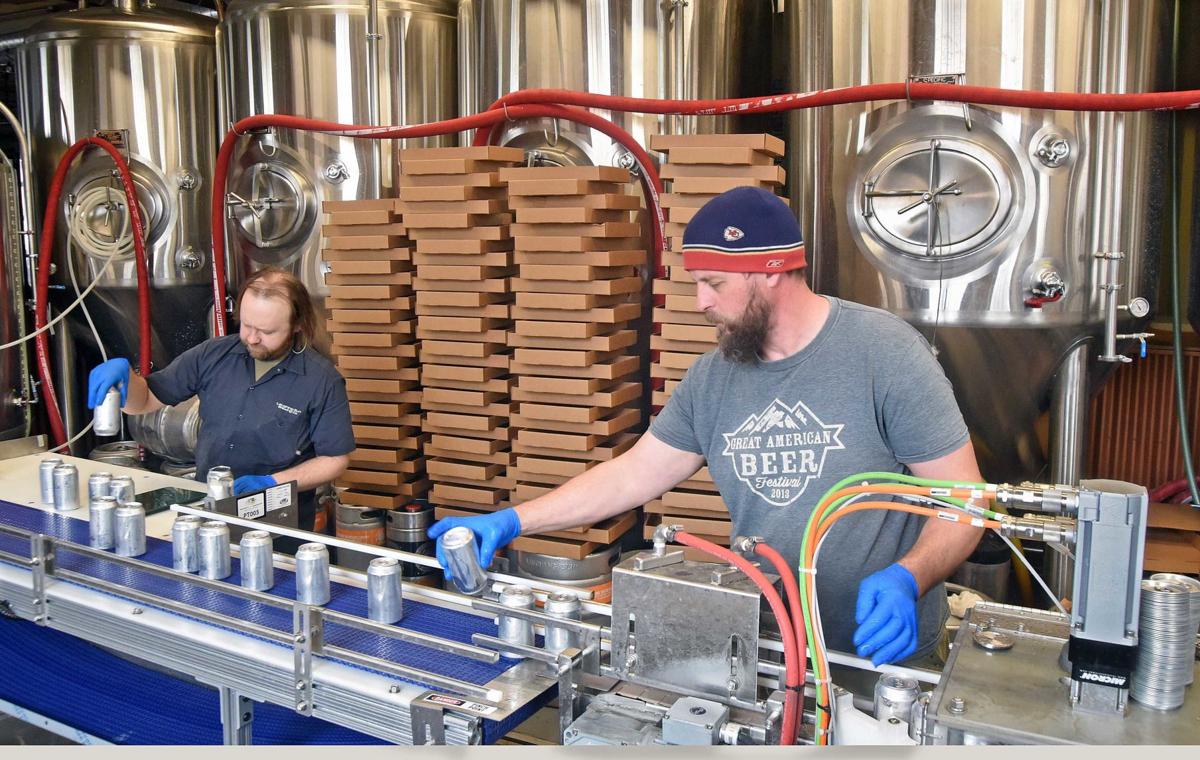 Mike Frohlich, right, and Tyler Schmalz were busy on the production line at Bismarck's Laughing Sun Brewery on Tuesday canning Space Probe Blue for sale on-site and for regional distribution. Frohlich said customer response during the limited open hours has been good. 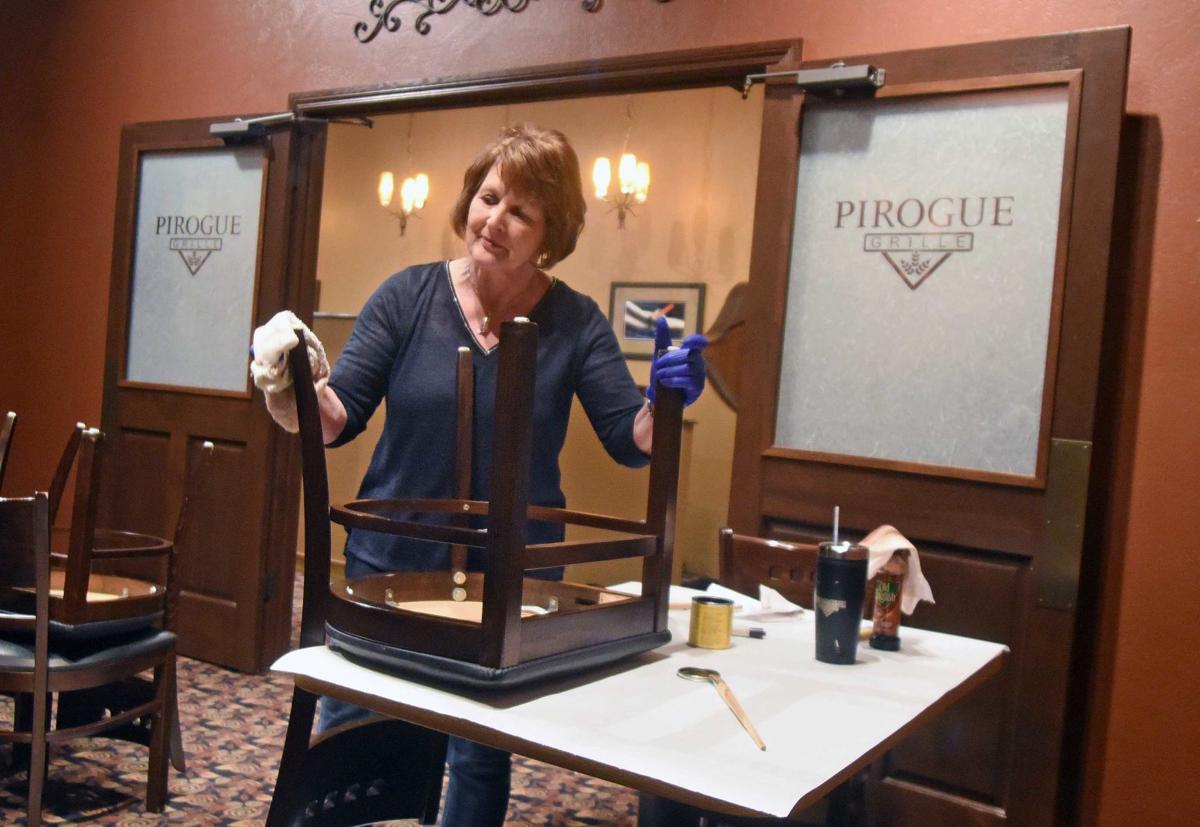 At the Pirogue Grille in downtown Bismarck, the dining room is closed and the kitchen is providing a limited takeout menu. Above, Cheryl Tracy cleans and details furniture on Tuesday afternoon. "Basically what we are doing is curbside orders, and inside we are cleaning," she said.

Stuart Tracy has an idea of how the Pirogue Grille will weather the storm from the coronavirus pandemic.

"By the skin of our teeth, most of us," said the co-owner of the restaurant in downtown Bismarck.

"I see our capabilities would get worrisome after about 60 days," he said. "And worrisome from the standpoint of the longer it goes, I think the bounce-back becomes less."

Takeout, delivery, drive-thru, off-sale and curbside pickup services remain available. Burgum encouraged business owners to "find a way to continue to keep their businesses going and keep serving your customers, but do it without on-site or on-consumption parts of your business model." The order will be reevaluated closer to April 6 as the virus situation changes.

Some Bismarck dining and drinking establishments are considering what hard times could be ahead while they weigh or make changes to their staffing, menus and hours of operation. The decisions affect not only the businesses but the lives of their workers, who also are caught in the upheaval.

Laughing Sun Brewing co-owner Mike Frohlich said the brewery laid off 15 kitchen and taproom employees, though some are now volunteering at the brewery, "being part of the family."

Otherwise, it was just him and one part-time employee who was helping him can beer on Tuesday morning.

The brewery in Bismarck is open a couple hours a day for off-sale of beer. Cans are mostly the main product now that distributors don't have keg orders, he said. Growlers are available but refills are not.

"We're just going to kind of push it out as an event and see how we go, and maybe we'll try to grow it from there," Frohlich said. "We're just trying to feel out how it's going to work."

He expects the on-site closure to last beyond April 6, and said Laughing Sun has applied for U.S. Small Business Administration disaster loans and waits to see what aid comes from Washington.

Blarney Stone had voluntarily closed its doors before Burgum's order and used Monday and Tuesday to "reassess and redesign a menu," co-owner Jim Poolman said.

"It is virtually impossible for us ... with an extensive menu, to offer every menu item for takeout and delivery," he said. "It's way too expensive to have all of those products on hand with the demand that's out there right now -- or the lack of demand."

The pub reopened Wednesday with a reduced menu for takeout and delivery at its locations in Bismarck, West Fargo and Sioux Falls.

Staffing decisions were still under consideration late in the week as Blarney Stone waited on details about the federal stimulus package, with the goal "to keep as many of our staff on board as possible with what's available to us and what we can afford," Poolman said.

"Our staff is a huge priority to us and taking care of them," he said. "We invest in them and they're our family."

Four Pirogue Grille employees who have other jobs during the day volunteered to "step aside" so others of the small staff without other work can help with the restaurant's deep clean and takeout, Tracy said. He's aware of two employees with other service industry jobs who have filed for unemployment.

The restaurant offers call-in, curbside pickup with a menu reduced from 33 to 14 items, Tracy said. Customers are down to about 15% now of what they were before, he said.

For now, the restaurant will work through its deep clean and reduced hours.

"We can make it longer, and that's through the relationships that one has built up over the years with the community and with your local banks, and so I've been assured that throughout the years that help is a phone call away if you need it," Tracy said. "And I believe that to be true, still."

He called the virus outbreak "devastating" for bars and restaurants but said retailers also are feeling the pain.

"I think the ripple effect is going to be tremendous," Zimmerman said.

He's not sure what to expect after Burgum eventually "flips the switch and says 'OK, everybody can go out again.'"

"Some people think there's going to be like a mad rush to go out, but North Dakotans are very conservative and very smart, and I'm afraid that they're going to say 'No, not yet, let's just pump the brakes,'" Zimmerman said. "And the reason I think that is because before Burgum even said restaurants and bars have to close, the week prior to that, our business fell by 95%."

Among those laid off from the service industry is Jaiden Anderson, a 36-year-old former Red Lobster server. He hasn't been able to find another job.

But he's not only without a job -- he lost his living situation amid a recent family trip to Minneapolis-St. Paul. Anderson said his roommates warned him "you don't have a place to live when you get home" if he went due to the risk of coronavirus transmission in the Twin Cities area.

He's been living out of his truck since Sunday in a Bismarck retailer's parking lot, he said. He had planned to shower at his gym, but that was ordered closed, too. He also said he was turned away from a homeless shelter, and he even reached out to the governor's office for help. His son's mother is holding onto his possessions until he can find an apartment.

"I wasn't expecting this kind of fallout," Anderson said. "I feel it went from a normal world to a third-world country in a couple weeks."

He plans on "riding it out" until normalcy resumes.

Not all restaurant workers who are now without work were let go -- some left of their own accord. About half a dozen workers at A&B Pizza’s south Bismarck location walked off the job March 19, according to cook Jordan Dittus.

“We didn't want to be responsible for the pizza party that might have tripled the state’s coronavirus statistics,” he said. “The epidemic is everyone's responsibility.”

Stylists and their clients are grappling with effects of the coronavirus pandemic, including a statewide closure of personal care services.

Bars, restaurants, salons and other businesses closed or restricted due to the coronavirus pandemic are weighing their moves for reopening.

A North Dakota judge has dismissed a lawsuit challenging the governor’s authority to shut down businesses during a pandemic, but the decision will be appealed.

Jim Poolman considers the Blarney Stone lucky in weathering the coronavirus pandemic over the past year.

Mike Frohlich, right, and Tyler Schmalz were busy on the production line at Bismarck's Laughing Sun Brewery on Tuesday canning Space Probe Blue for sale on-site and for regional distribution. Frohlich said customer response during the limited open hours has been good.

At the Pirogue Grille in downtown Bismarck, the dining room is closed and the kitchen is providing a limited takeout menu. Above, Cheryl Tracy cleans and details furniture on Tuesday afternoon. "Basically what we are doing is curbside orders, and inside we are cleaning," she said.