more info
This content was produced by Brand Ave. Studios. The news and editorial departments of Bismarck Tribune had no role in its creation or display. Brand Ave. Studios connects advertisers with a targeted audience through compelling content programs, from concept to production and distribution. For more information contact sales@brandavestudios.com.
Stepping into the future — How the U.S. Army helps prepare Soldiers for a career beyond service
0 comments
Share this

Jakob Skelton was 19 years old and in college but confused about the future. He realized he was “not a fan” of college life. “I had no clue where I saw myself in five, 10, 15 years. I enlisted, and the rest is history,” he recalled. Skelton left college and took charge of his future by enlisting in the U.S. Army, where he became a Signal Intelligence Analyst for a Special Forces unit. After serving eight years, which included two tours to Afghanistan, Sgt. Skelton was ready to enter civilian life and start his professional career. Once again, he looked to the Army for help and took advantage of many of the services offered to prepare for life post-military.

Skelton located the Transition Assistance Program offered by the Army, which introduced him to a Military Apprenticeship program offered by Amazon. “When Amazon comes knocking, it's hard to say no. I am currently in the Apprenticeship program as a Systems Development Engineer. This allowed me to obtain Linux+ and LPC certifications,” he said. Skelton said that he would not have had access to this program as a civilian with no prior experience or education.

The U.S. Army has all of the tools available for a successful life and career, whether you are certain of your purpose or not. Once enlisted, a host of benefits await including career training that suits your skills and goals including jobs in science, intelligence, combat, aviation, engineering, law and more. Educational programs can help pay for college, pay off existing loans or earn college credit while on active duty. Transition programs help you succeed in careers after your service has ended.

The Army’s unique career match tool and on-site recruiters and mentors ensure that you are on a continuum to your personalized path to success. While enlisted, you have the opportunity to train and achieve a professional or trade certification in almost any field. You are given hands-on training and are expected to carry more responsibility than you would starting out in a comparable civilian job.

In addition to technical skills, the Army also fosters the soft skills that every employer seeks. U.S. Army veterans are exceptional team members and leaders. They understand and respect hierarchies, have an amazing work ethic and are highly adaptable. These skills are invaluable to career growth and easily transferable to a civilian career.

Transitioning from Soldier to Civilian

Some Soldiers choose to build lifelong careers in the Army. Others decide to pursue opportunities in jobs outside the military. The valuable military training and experience one receives during their time of service often makes finding a job after the Army considerably easier. Whatever path you choose, the Army supports your decision with programs and guidance to help you succeed in post-military careers. Here are just of few of the programs designed to aid in transitioning out of the military:

The Soldier For Life Transition Assistance Program (SFL-TAP) helps Soldiers prepare for futures after the Army through a program called the Transition Assistance Program (TAP). TAP helps all eligible transitioning Soldiers discover knowledge, skills and resources necessary to be competitive and successful in the global workforce. Career counselors are on hand to help Soldiers craft résumés, network with employers and determine post-Army careers that best utilize the skills learned as a Soldier.

The Partnership for Youth Success (PaYS) Program, a partnership between the U.S. Army and a cross section of American corporations and public sector agencies, provides a unique opportunity to serve the country while simultaneously preparing for the future. Soldiers and ROTC cadets are guaranteed a job interview and possible employment with a PaYS partner of their choice. It’s a valuable benefit that the Army is proud to offer.

If you're interested in a career as a teacher following your Army service, the Army's Troops to Teachers program can help. You'll receive help identifying teacher certification requirements, programs leading to certification and employment opportunities. According to the program's website, eligible military veterans may receive a stipend of up to $5,000 to help them pay for state teacher certification and a one-time bonus of up to $10,000 for agreeing to teach in a high-needs school district.

The GI Bill is one of the most powerful benefits available to Army Soldiers interested in attending a four-year college, trade school or technical school. In most cases, Soldiers using the GI Bill receive full tuition for their military service. The GI Bill also provides allowances for housing and text books in varying amounts based on how long you have served. In addition to tuition, GI Bill benefits may also be applied to:

Additionally, the Army offers graduate-level scholarships in law, medicine and the seminary. The U.S. Army health care team will pay 100 percent of your tuition for a graduate-level health care degree for any accredited medical, dental, veterinary, psychology or optometry program in the United States or Puerto Rico through the Health Professions Scholarship Program (HPSP). The Funded Legal Education Program (FLEP) authorizes the selection of 25 Active Duty Army Officers each year to obtain a legal education. Scholarships are awarded on merit to Officers ranking from Lieutenant to Captain.

Whether long or short, time spent in the U.S. Army sets you on a path to success. Just ask Jake Skelton:  “If you are unsure of where you want your life to go or how to get there, use the military. Use it as a stepping stone to further yourself, learn about the limits you can put yourself through. If you don't test/know your limits, how are you ever going to better yourself?”

This content was produced by Brand Ave. Studios in collaboration with the U.S. Army. The news and editorial departments had no role in its creation or display. For more information about Brand Ave. Studios, contact tgriffin@brandavestudios.com. 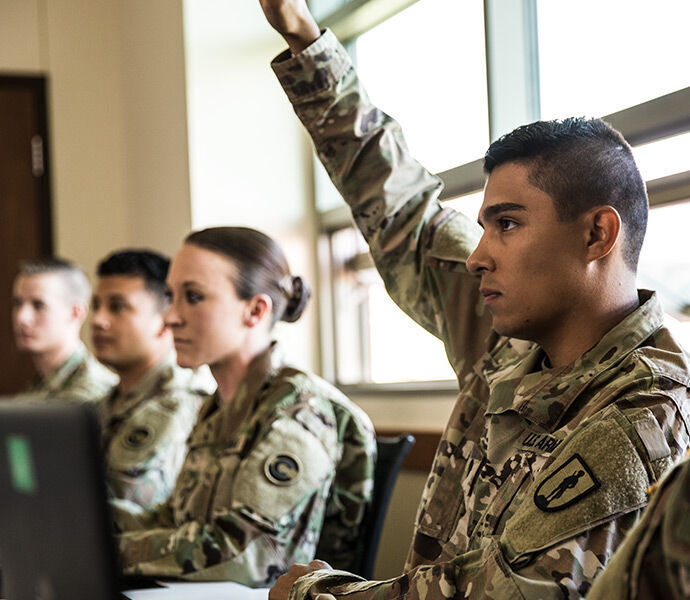