A proposal to construct a pair of “slurry wells” in McKenzie County would offer a new option in North Dakota for disposing of oilfield waste, including radioactive material.

The project, proposed by Hydroil Solutions, involves building two wells north of Alexander that extend deep underground. Solid waste carried to the site would be combined with saltwater before the mixture is injected down the holes for permanent storage.

Some believe such a facility could be the way of the future for handling oilfield waste that otherwise gets disposed of at landfills. Former McKenzie County planning and zoning director Jim Talbert said he was skeptical of the technology when he first heard about it, but the more he learned, the more he saw its promise.

“It looked to me like it was one based heavily in science and that it would protect the environment,” he said. “It was a way to eliminate landfills, eliminate saltwater and eliminate TENORM safely.”

TENORM refers to technologically enhanced naturally occurring radioactive material. The waste stems from soil, water and rocks that naturally contain low levels of radiation underground. When those materials are brought up to the earth’s surface during oil production, radiation can become concentrated in filter socks used to strain oilfield fluids, in sludge at the bottom of storage tanks and in scale that forms in well pipes, according to the state Department of Environmental Quality.

Not everyone’s sold on the proposed wells. Some people, including several residents of Tri Township, where the wells would be drilled, have concerns. That’s not uncommon for projects dealing with radioactive oilfield waste, particularly during the past few years as the state has grappled with creating rules and vetting proposals for facilities that would handle the material.

BJ and Wes Lindvig live just east of the proposed site. They’ve been trying to gather information about slurry wells and have a lot of questions about how the facility would operate. They worry about truck traffic and say there are already several waste facilities in their area, including a saltwater disposal well and a landfill, which a few years ago sought its own permits to bury radioactive waste. The township opposed the project, which never materialized.

“I’m not sure that we need another oilfield waste disposal site right in the same area,” BJ Lindvig said.

While no slurry well exists in the state, they have been used for decades in other parts of the country, such as in Louisiana and Alaska.

The concept first drew attention in North Dakota several years ago when Waste Management proposed constructing similar wells. A hearing for the project drew opposition from the county, and Talbert spoke out against it due to its proximity to an aquifer. The company later withdrew its application.

Talbert, however, is not opposed to the idea of a slurry well. He testified in favor of the Hydroil project at a state Oil and Gas Division hearing earlier this year.

Hydroil’s proposal is still in the permitting stage. It’s received several initial approvals from the state but will require more permits from the Oil and Gas Division, as well as a radioactive materials license from Environmental Quality.

How a slurry well works

Hydroil is a startup company with managers in North Dakota and Arizona that has contracted with Terralog Technologies to build the wells. Terralog, an Alberta-based company with experience drilling similar wells around the world, declined to comment for this story, citing a company policy against speaking to the media about clients’ projects.

“We are going to be the manager of the site overall, and Terralog will manage the process of injections,” Hydroil CEO Jacob Anderson said.

In addition to TENORM, they would accept nonradioactive solid waste. State Mineral Resources Director Lynn Helms said that could include anything that normally goes into a landfill, such as contaminated soil, sludge and drill cuttings.

And like many injection sites in the Bakken, the slurry wells would dispose of saltwater that comes up alongside oil and gas at well sites. The fluid can render farmland infertile for decades if it spills.

Hydroil’s proposal is to grind up the radioactive and nonradioactive solid waste and mix it with saltwater to form a slurry, which would then be sent down the wells.

North Dakota has grappled with how to dispose of radioactive waste for years. At times, the materials have been dumped illegally.

New rules went into effect in 2016 letting landfills accept waste with a higher level of radiation than previously allowed, up to 50 picocuries per gram. But no facilities have managed to obtain permits to take that waste, although two landfills are currently in the application process.

Hydroil’s wells could handle even higher levels of radiation.

“We can put the hottest, nastiest stuff downhole,” Anderson said.

The slurry wells would not have to adhere to the 50-picocurie limit, as they are not landfills, according to Environmental Quality. They would have to comply with a radiation limit for possessing the materials above ground before they are injected. The cap would be based on the amount of financial assurance the company puts up, such as a bond, state environmental scientist David Stradinger said. The money guarantees funding will be available to clean up the facility if the company were to abandon it.

The department would also put monitoring requirements in place.

“They would be using handheld radiation survey instruments and performing routine surveys of the facility that they would define in their program,” Stradinger said.

State Radiation Control Program Manager Dale Patrick said the radioactive material would not be prone to becoming airborne, as it would be in liquid form.

Shooting the slurry underground involves a process known as “slurry fracture injection.” Anderson said a common misconception is that the process is the same as “fracking,” which involves sending sand, water and chemicals at a high pressure down an oil well to create fractures in shale rock that help to release the crude.

The slurry would go down the proposed injection wells at a pressure just high enough to create fractures in the rock below. Anderson said a good way to demonstrate the difference between this process and fracking is to hold your hand in front of you with your fingers closed.

“When oil companies frack the ground, they basically blow your fingers off and suck everything out,” he said.

Slurry fracture injection, however, “just pushes your fingers apart, and that’s where all the goo goes,” he said.

State Mineral Resources Director Lynn Helms said the Oil and Gas Division looked to other states including Louisiana and Alaska that have experience with slurry wells when reviewing Hydroil's proposal. He said the division learned that the layers of rock surrounding where the slurry would be injected need to have specific geologic characteristics, which regulators have taken into account in the Hydroil project.

The geology needs to be such that the rock atop the injection area serves as a barrier, preventing the slurry from contaminating underground water. Hydroil’s wells would reach a depth of at least 7,000 feet.

Building two wells at the site is intentional. One will be used for up to 12 hours, at which point the company will switch to the other, Helms said. The rest period allows the rocks to relax, as the slurry moves away from the well and the pressure drops.

“In order to do that efficiently, you need a pair of wells,” Helms said.

Anderson said the company will keep close tabs on the wells using software that collects data from the facility every three seconds.

Representatives from Hydroil have spent a lot of time visiting with state and county officials to talk about the project, Anderson said.

The Lindvigs say the township, however, hasn’t heard much about the proposal.

“My question is how many of these things are they going to put up?” BJ Lindvig said. “Are we just going to be inundated?”

Helms said he sees potential for several slurry wells in each of the big oil-producing counties that generate a lot of waste.

“We’re rapidly growing the number of tanks and storage vessels out there,” he said.

If more proposals for slurry wells surface, he said, the state might develop formal rules to standardize the process.

As low prices cause oil producers to put the brakes on activity in the Bakken, state regulators on Tuesday directed the North Dakota Oil and G…

The oil industry ships 92,000 tons per year of radioactive waste out of North Dakota, equal to about 2,500 truckloads, according to a researcher studying the material. 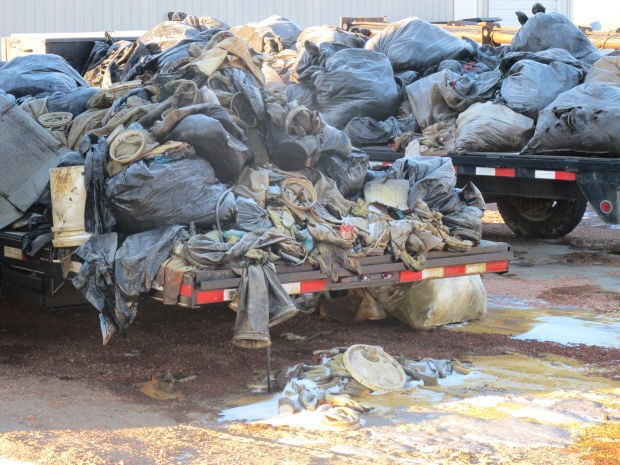 North Dakota officials investigated these trailers in 2014, which were leaking fluids and contained an unknown number of potentially radioactive filter socks. 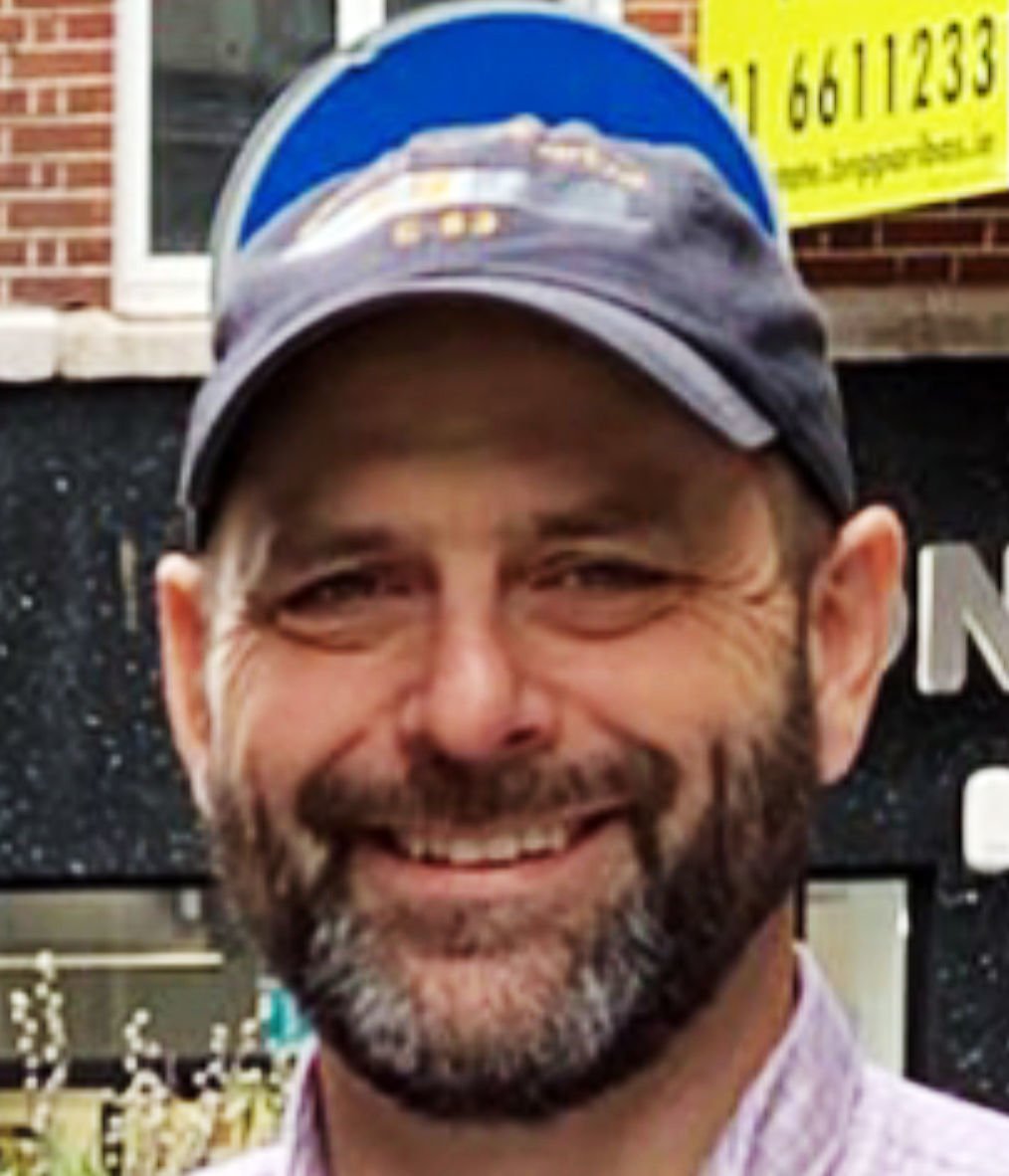 Jacob Anderson is CEO of Hydroil, which is proposing to construct a pair of slurry wells to handle oilfield waste in McKenzie County.