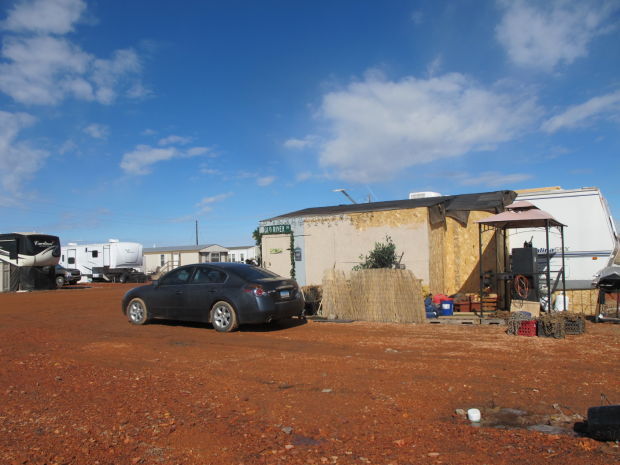 This man camp just east of Killdeer shows the effort some people put forth to make their fifth-wheelers and trailers look and feel like home, especially those who plan to stay for a while. 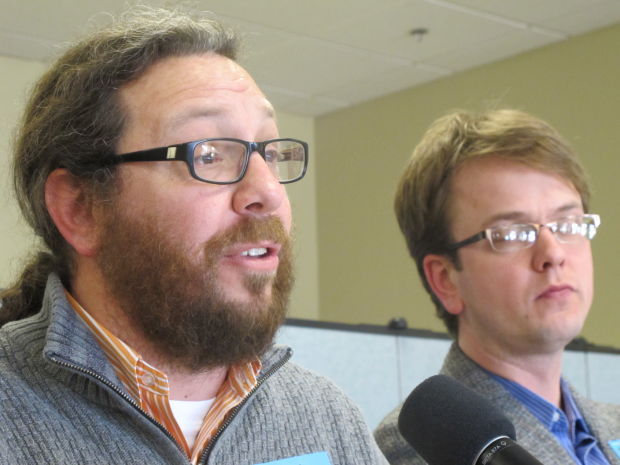 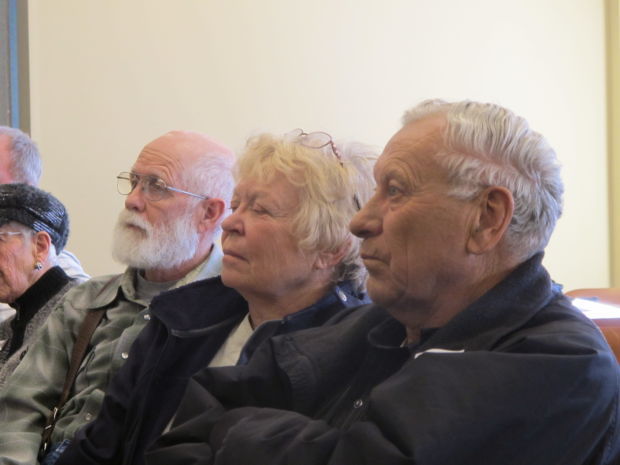 From left, Rob Sand, Slorine Lazorenko and Alex Lazorenko, of Killdeer, at a forum on the topic of man camps that was held at the High Plains Cultural Center in Killdeer on Sunday.

The sea of mud surrounding the High Plains Cultural Center on a warm March afternoon was a reality check that thousands of people are still living in rough muddy camps and trailer parks all over the oil patch.

The Killdeer parking lot will be concreted over soon, but for those who live cheek by jowl in fifth wheelers and jerry shacks, the end of the cold, the mud, and the inconvenience is not so clearly in sight.

Many in the oil patch are used to having thousands of men, women and children living in temporary trailer parks at the edge of town or out in the country.

But a multi-university research team decided that familiar or not, it is a social event on a grand scale worthy of study and preservation for history.

So for most of three years, at intervals, the team has been out taking a look and thousands of photographs and collecting stories from residents at 50 to 60 camps in the region.

They brought their experiences and impressions to a public presentation Sunday attended by about 30 people in Killdeer, a town itself no stranger to man camps with hundreds living in similar circumstances.

Archaeologist Richard Rothaus said it’s risky for scientists to simply collect data for no other purpose, but they believed someone should.

“It’s really bad methodology, to collect data for data’s sake, but no one else is collecting it, other than some journalists,” Rothaus said.

“Our goal is to gather the information. We’re not here with the answers but to have the information so that future generations can figure this out,” he said.

Researcher Bill Caraher said he was interested in the social intersections in which man camps were like any other community, where people grew flowers and vegetables and kept their camper yards as neat and tidy as they would back home.

“Despite being temporary, I was struck by how much energy they put into making it feel like home,” Caraher said.

He said it’s significant that the second largest town in McKenzie County is a man camp surrounding a fuel and food stop out on the highway.

“It’s completely modular -- it will not be there in a decade, or maybe it will be. It’d be interesting to come back in 30 years and see. North Dakota’s always been a place of dreams where more people couldn’t make it than could,” he said.

Dunn County resident Terrald Bang said he was curious about the opposition in Fryburg to turning the old school into a worker housing hotel and asked if the researchers understand “man camp phobia.”

Caraher said he links that to the 19th century dormitories for male factory workers.

“The thought was that men would go feral without the civilizing influence of women,” Caraher said.

Researcher Richard Rothaus reminded the audience that this boom is not the first time people have swept into the Plains and it won’t be the last time.

Some residents wanted to know how to integrate man camp residents in communities, or if the workers want to be.

Emily Guerin, an Inside Energy oil patch journalist and panelist, said many workers simply work too many hours to be concerned with social connections.

Killdeer resident Rob Sand said there have been some tensions and the boom has created some financial stress.

“What you guys are doing is useful, but it brings up these other questions,” he said.

The three researchers said they have between 50 and 60 man camps they rotate through, but counting exactly how many man camps exist in the oil patch and how many people live in them would be difficult, given that it’s a moving target.

Caraher said he thinks there are fewer people living in camps than when the project started, that much is evident.

“These are the lowest numbers that we’ve had in three winters, but it’s hard to know why. Is it because of housing being available in towns like Watford City, or oil companies pulling out, or a pipeline crews that’s moved on?” Caraher said.

He said they expected to find man camps tucked back in the hills off the grid, but found for the most part they’re linked to a major highway infrastructure.

Karol Keller of Killdeer said she attended the talk just to get a different perspective.

“The things they’ve looked at, I never would have,” she said. She recalls being leery when the first man camps opened in the county.

“We were a little leery, but these are just a bunch of people who work long hours and they want to go home, clean up, sleep and go back to work. It’s not easy coming up here,” she said.

The afternoon forum was sponsored by the Dunn County Historical Society and the North Dakota Humanities Council.

This man camp just east of Killdeer shows the effort some people put forth to make their fifth-wheelers and trailers look and feel like home, especially those who plan to stay for a while.

From left, Rob Sand, Slorine Lazorenko and Alex Lazorenko, of Killdeer, at a forum on the topic of man camps that was held at the High Plains Cultural Center in Killdeer on Sunday.