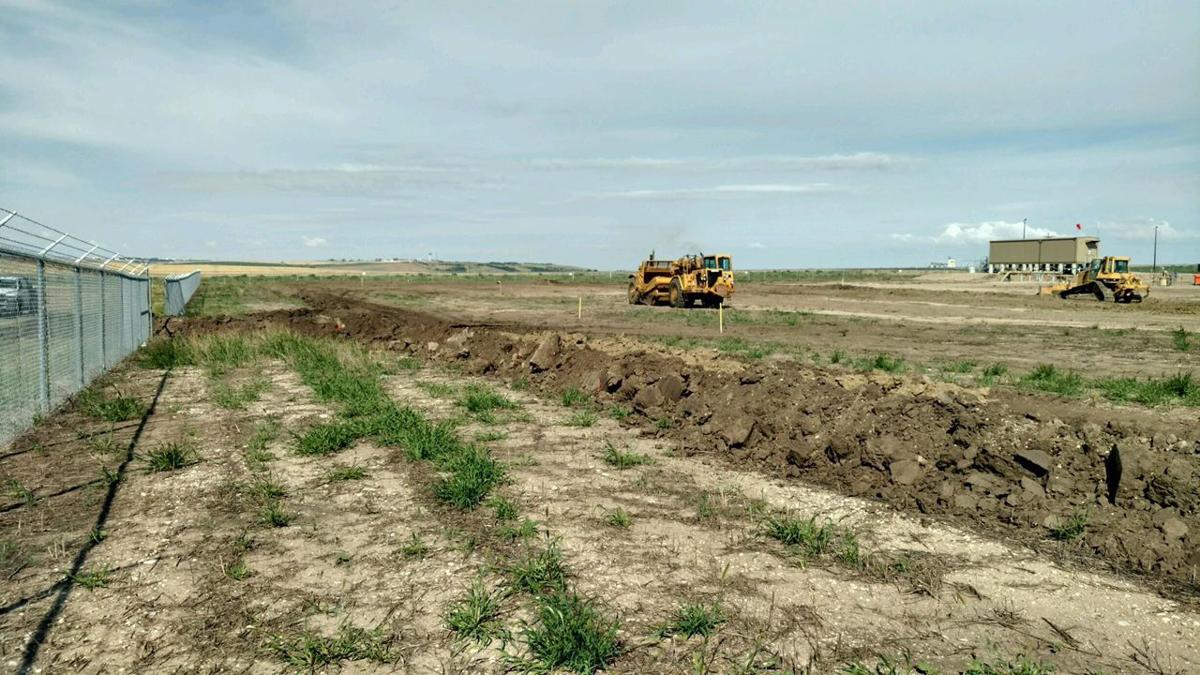 The Targa Resources landfarming operation is shown under construction in New Town in 2016. The project, which had the approval of the Tribal Business Council for the Mandan, Hidatsa and Arikara Nation, successfully cleaned up oil that had been contaminated by an oil spill. 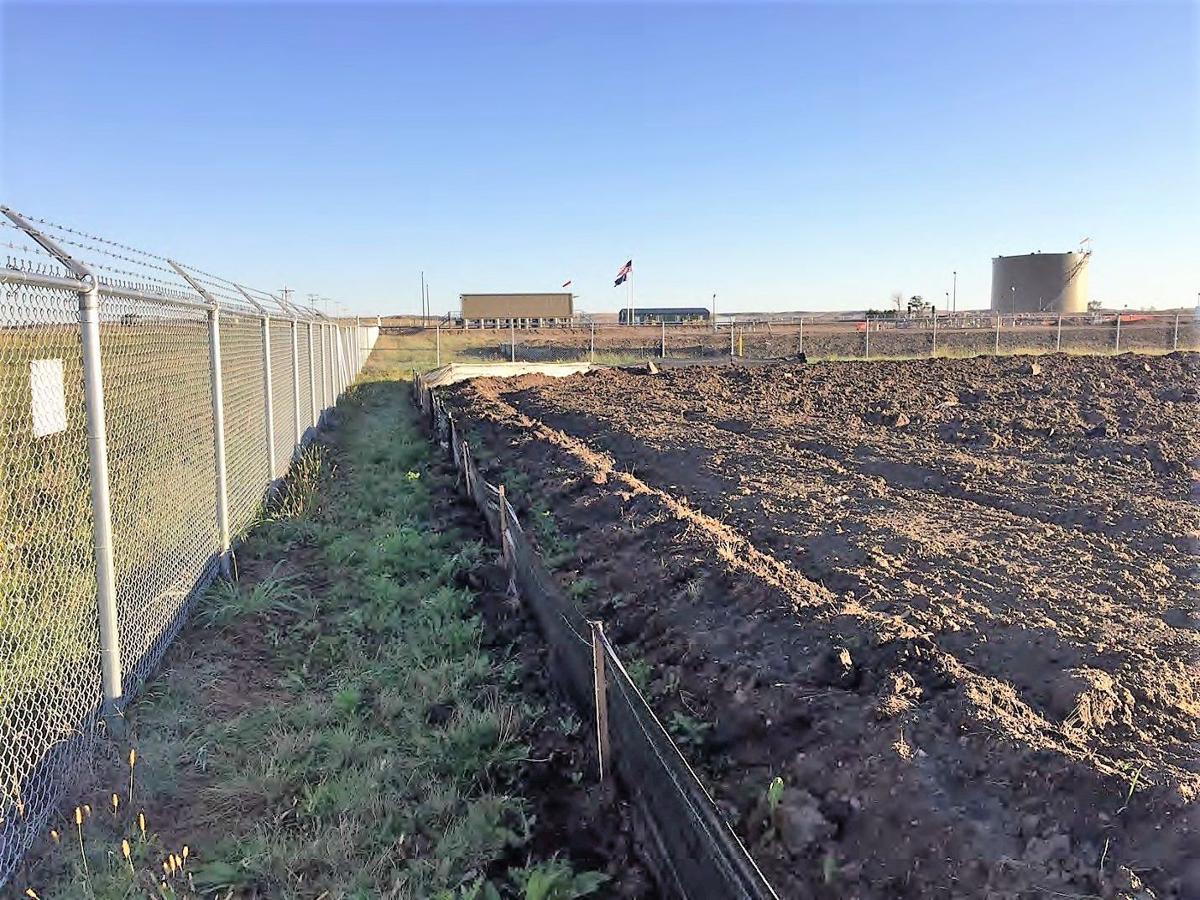 The Targa Resources landfarming operation in New Town involved the bioremediation of about 10,000 cubic yards of soil that had been contaminated by an oil spill. The site included a stormwater control berm and erosion controls.

A company that operates oil pipelines in North Dakota is promoting an alternative method to cleaning up spills: introducing bugs to contaminated soil.

Targa Resources has a pilot project in McKenzie County that is using bioremediation, also known as landfarming, to remove spilled oil and allow the soil to be reused.

“When you spill hydrocarbon, there are naturally occurring microbes − bugs − that immediately start to eat it,” said David McQuade, senior environmental director for Targa. “I’m adding a bunch more bugs that want to eat it at a faster rate.”

The company successfully completed a landfarming project on the Fort Berthold Reservation last year that treated soil contaminated by an oil pipeline spill. Instead of hauling the soil to an industrial landfill, Targa got permission from the Tribal Business Council to do bioremediation at the company's facility in New Town.

The regulatory process to do a similar project in North Dakota off of the reservation is more cumbersome, according to McQuade. He presented to the Legislature’s interim Energy Development and Transmission Committee last week, advocating for the state to streamline the permitting process so more companies will consider landfarming instead hauling the soil to landfills.

“Let’s reuse this instead of just wasting it,” McQuade said in an interview. “You can’t get it back out of the landfill once it’s there.”

The microorganisms added during the bioremediation process degrade contaminants in the soil. To accelerate the process, the contaminated soil is spread about 8 inches thick and crews work the soil periodically to make sure the microbes have enough oxygen, McQuade said.

The bugs digest the hydrocarbons and convert them to carbon dioxide, water and organic matter.

“Naturally, the soil at end of process becomes a very, very fertile material, sometimes more fertile than it was before the spill,” McQuade said.

The bioremediation process only works for hydrocarbon spills and cannot be used to remove produced water, also known as brine, he said.

With the Fort Berthold project, Targa was able to reduce the concentration of hydrocarbons to a level that is below the North Dakota Department of Health standard, which is 100 milligrams of hydrocarbon per kilogram.

Now the company is doing its first landfarming project off the reservation and under the jurisdiction of state health regulators.

The Department of Health approved a permit in June for Targa to treat just under 10,000 cubic yards of soil at the company’s Alexander crude oil pipeline terminal. The soil was contaminated in August 2015 from a pipeline spill near Watford City, the department said.

The landfarming site is constructed with soil berms and silt fencing to prevent stormwater from running on or off the location, McQuade said.

Targa will be required to submit monitoring reports to the health department, and inspectors will periodically visit the site, said Chuck Hyatt, director of the Division of Waste Management.

“Since this is somewhat of a new type of facility, we want to keep an eye on it,” Hyatt said.

Baseline testing was conducted in July on the soil beneath the treatment area, Hyatt said. The health department will be involved with making sure the contaminated soil is cleaned up to the state standard and also testing the ground underneath after the treated soil is removed.

“We’re very interested to see what the outcomes of this are,” Hyatt said.

Because the microorganisms hibernate in the winter, the project is expected to continue into next year.

The permit expires on Dec. 31, 2019. If the contamination is not removed by that date, the health department will require Targa to dispose of the soil in an industrial landfill, Hyatt said.

McQuade, who applied for the health department permit in December 2017, said the project likely could have been completed this year if he’d received the permit sooner.

McQuade said he’s meeting with policymakers and leaders of the Northwest Landowners Association about possible solutions to speed up the permitting process.

Hyatt said there are several factors for regulators to evaluate, including making sure the location is acceptable for a landfarm and preventing the risk of contaminating a new site.

Troy Coons, chairman of the Northwest Landowners Association, said the group is interested in learning more about landfarming and plans to monitor Targa’s results and tour the Alexander site.

“The key for everyone is they don’t want to be left with the contaminant or the nonproductive soil,” Coons said.

The Targa Resources landfarming operation is shown under construction in New Town in 2016. The project, which had the approval of the Tribal Business Council for the Mandan, Hidatsa and Arikara Nation, successfully cleaned up oil that had been contaminated by an oil spill.

The Targa Resources landfarming operation in New Town involved the bioremediation of about 10,000 cubic yards of soil that had been contaminated by an oil spill. The site included a stormwater control berm and erosion controls.