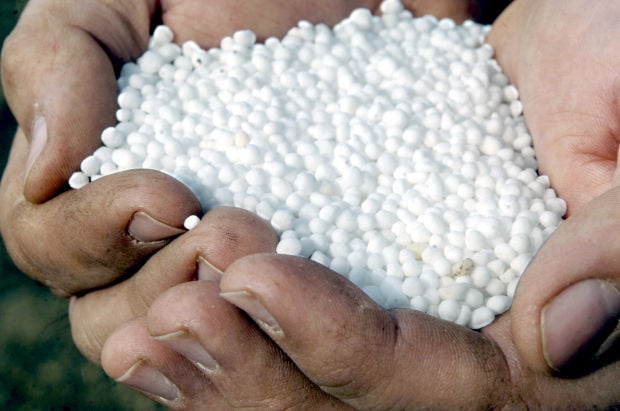 Tiny pellets of the chemical urea are sometimes mixed with simular pellets into special mixtures of nitrogen-release fertilizers requested by individual farmers. 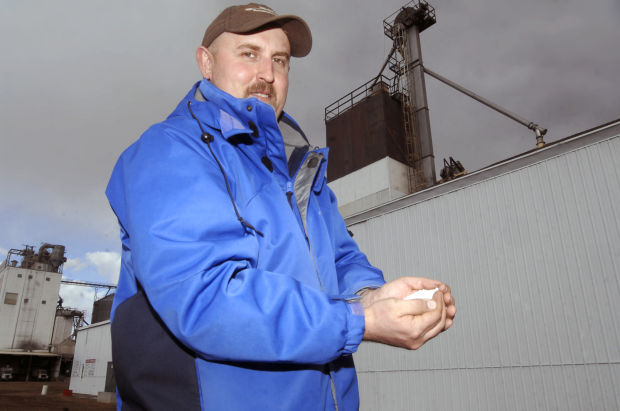 Joe Brinks, plant manager of Alliance Ag Cooperative in Bismarck, holds a sample of urea, one of the standard dry sources of nitrogen-release fertilizer used by area farmers.

BISMARCK, N.D. _ Urea plants to start operating in about two years could supply the entire state of North Dakota, and then some.

The use of urea, an agricultural nitrogen-based fertilizer, has been on the rise, Franzen said. About 450,000 tons of it is used by farmers in the state each year, he said.

Dakota Gasification Co., said 2.4 million tons are imported into the region each year.

Three new plants, which will come online around the same time between 2016 and 2017, will together produce about 2 million tons of urea annually. That will offset about 83 percent of imports into the region.

North Dakota currently does not produce urea. Most of the fertilizer in the region is imported, from other countries or sent up the Mississippi River from the southern U.S. by barge and shipped by rail.

One of the plants that will produce urea, Great Plains Synfuels, already makes a small amount of the fertilizers ammonium sulfate and anhydrous ammonia, Franzen said. The other two fertilizer plants, in addition to producing urea, will add to the state’s anhydrous ammonia production and will make UAN, a mixture of urea and ammonium nitrate.

North Dakota farmers use about 220,000 tons of anhydrous ammonia a year, Franzen said.

Joe Brinks, manager of Alliance Ag in Bismarck-Mandan, said most of his customers are going away from anhydrous because farmers are able to order a custom application for urea.

Brinks said there will be enough demand to support all three planned plants because all of the urea is shipped in now.

“It’s just going to change the logistics of it,” he said.

Brinks is expecting the cost to go down in the state when the plants open because freight costs will be less. He said it’s relatively inexpensive to get urea here by rail but oil moving out of the state has taken up many of the rail cars. Producing the fertilizer in the state will result in a steadier, more reliable supply.

“We can keep our tanks full now but when the tractors start rolling, we can empty the plant in three or four days,” Brinks said.

Urea can be used on most crops except certain legumes like alfalfa, dry beans and peas and lentils, Franzen said. The fertilizer is used heavily in Montana and the Canadian provinces, he said.

That means there are opportunities for the plants to ship the fertilizer they produce to nearby states.

Franzen said the success of the three plants will depend on efficiency and their ability to compete with offshore importers. He expects the competition to drive down the price of the fertilizer.

“I see it as a positive,” he said of the building of the plants.

CHS Inc. will open in late 2017. The cooperative plans to build a $1 billion nitrogen fertilizer-manufacturing plant on 200 acres near Spiritwood.

The plant will produce 2,200 tons of ammonia daily, which will be made into anhydrous ammonia, urea and UAN.

“We’re always on the lookout for something new,” said Curt Pearson, manager of media and community relations at Basin.

Construction of the urea plant will take 21/2 to 3 years. It will serve a 250-mile radius, reaching into Minnesota, South Dakota and Montana.

The fertilizer will be shipped out to the wholesalers to which the cooperative currently sells its other fertilizers via a rail facility to be built with the plant.

Pearson said Basin Electric’s board of directors is committed to the project and plans for the plant will not be scrapped.

A third plant, planned for Grand Forks and being built by Northern Plains Nitrogen, will cost $1.8 billion. When completed, it will produce 2,400 tons of nitrogen-based fertilizer daily.

Pottinger said the plant will make its fertilizers from natural gas supplied by the Viking Gas Transmission Co. pipeline in Minnesota. He hopes to use more Bakken gas as it becomes available.

Pottinger said the plant would like to supply fertilizer retailers within a 300-mile radius.

“The best market is always the closest market,” he said.

Longer distances mean freight costs increase and competition becomes tougher. Pottinger said the company will go as far as necessary to sell all its product, though.

The plant will be ideally placed for truck transport, Pottinger said. It’s near Interstate 29 and U.S. Highway 2, and is close to BNSF Railway’s main rail line.

Pottinger said all three plants are likely to go through with their plans. Northern Plains Nitrogen has its land and natural gas contracts.

He said if his company and CHS open plants, it will only replace about half the imports into the area.

Climbing U.S. oil prices that have motorists paying more at the gas pumps are adding to North Dakota's bottom line.

Tiny pellets of the chemical urea are sometimes mixed with simular pellets into special mixtures of nitrogen-release fertilizers requested by individual farmers.

Joe Brinks, plant manager of Alliance Ag Cooperative in Bismarck, holds a sample of urea, one of the standard dry sources of nitrogen-release fertilizer used by area farmers.