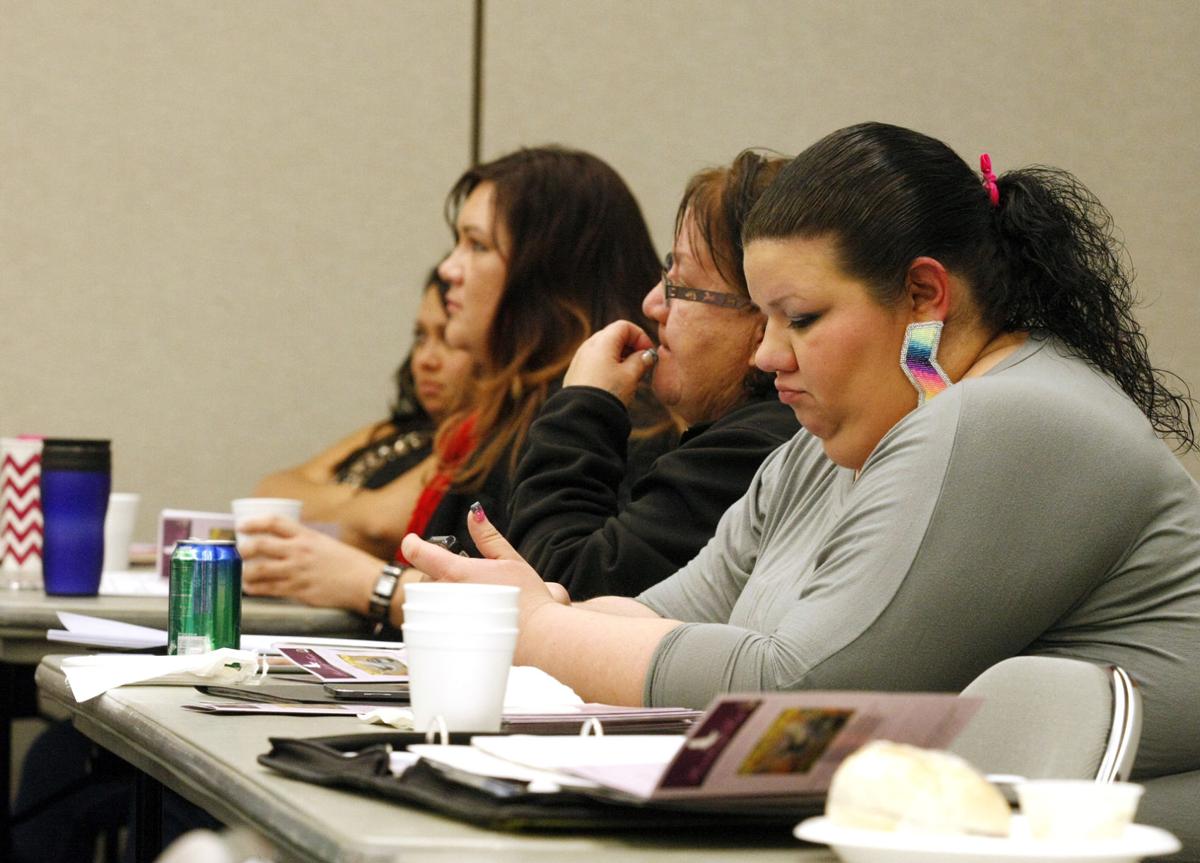 Sadie Young Bird, the director of the Ft. Berthold Coalition of Domestic Violence, listens during a breakout session during the 2014 statewide summit on human trafficking put on by North Dakota FUSE at the Bismarck Civic Center in Bismarck, N.D. on Thursday, November 13, 2014. Carrie Snyder / The Forum 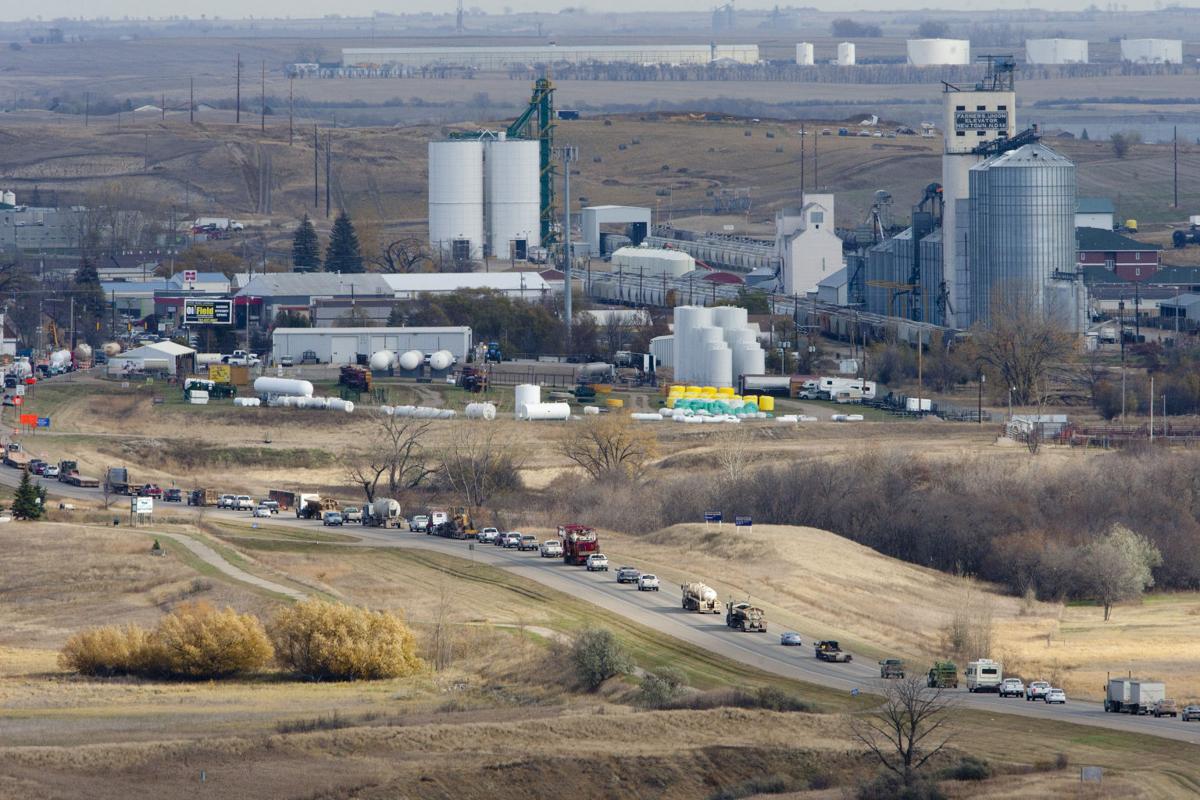 NEW TOWN, N.D. – As the Fort Berthold Indian Reservation reels from the impacts of producing a third of North Dakota's oil, the reservation must add human trafficking to its list of increasing hazards.

"We're in crisis mode, all the time, trying to figure out these new ways, these new crises that are coming to us that we never thought we'd have to worry about," said Sadie Young Bird, director of the Fort Berthold Coalition Against Violence. "No one was prepared for any of this."

"I'm really hoping to send a message that we are not tolerating this on our reservation," said Chalsey Snyder, a tribal member who helped draft the law.

Meanwhile, victim advocates and leaders of tribal nations in neighboring Minnesota and South Dakota worry about reports of American Indian women and girls being trafficked to the Bakken.

Suzanne Koepplinger, former executive director for the Minnesota Indian Women's Resource Center, said she started to hear anecdotal stories in 2010 and 2011 about a boyfriend or friend telling women and girls, "Let's go to North Dakota over the weekend and make some money."

"Because of poverty and high rates of mobility with Native people, it's not unusual for them to go up to White Earth for a party and then say, 'Let's just buzz over to North Dakota and see a friend of mine,' and then she's gang-raped over there," Koepplinger said.

Since 2010, Indian girls in Minnesota have reported to service providers that family members or friends have tried to talk them into going to North Dakota.

"Their girls go missing and then show up in the North Dakota child protection system, or are picked up by law enforcement in Williston, Minot," Koepplinger said.

Erma Vizenor, chairman of the White Earth reservation in western Minnesota, said sex trafficking of women and girls has been a concern there for a long time, and the proximity of North Dakota's oil boom adds to that concern.

The DOVE program received funding through the Minnesota Safe Harbor law and is connecting Indian youth who are victims of sexual exploitation with services. The efforts will include collaborations with Red Lake and Leech Lake reservations in northwest Minnesota.

The vulnerability of Indian populations to become victims of sex trafficking, particularly at Fort Berthold with the impacts of the oil boom, is a major concern, U.S. Sen. Heidi Heitkamp, D-N.D., said.

"The grooming of the candidate for trafficking tends to go to lower income, tends to go to kids who've been victimized in the past, so automatically that puts them in a category that is hugely at risk," Heitkamp said during a discussion hosted by the McCain Institute for International Leadership and moderated by Cindy McCain.

"You can't help but sometimes, walking around the casino, you see individuals who would be highly suspect," Fox said.

Young Bird, whose program has seen a significant increase in domestic violence victims, has assisted some sex trafficking victims, although the women and girls don't usually identify themselves as victims. Some have returned to South Dakota reservations, she said.

The domestic violence program, which has a new shelter in Mandaree and a new safe house elsewhere in the Bakken, primarily serves Indian women, but also will serve non-tribal members.

A meth epidemic on the reservation contributes to the violence Young Bird sees, including more severe sexual assaults.

"You can tell when there's no meth around and you can tell when there's a new shipment of meth around. The severity is worse when the meth is gone," Young Bird said. "When the new shipment comes, it's more that they head out and they leave and they leave their family with nothing. They spend all the money. Then when the wife is asking for money, that's when the violence occurs."

Heroin is a major problem for the reservation, too, she said. In one sex trafficking case, the pimp kept the woman compliant using heroin, Young Bird said. The woman did not want to press charges.

"They all want to leave. They don't want to stay around. And we can't force them. We're the advocates; we're not law enforcement. We're there to support people," she said.

A recent law change will allow the tribal court to prosecute human trafficking cases that don't rise to the level of being charged in U.S. District Court.

"This law allows our reservation to take back ownership and take back the prosecution and penalties," Snyder said.

The law is called Loren's Law in memory of Loren White Horne, a behavioral health specialist from Fort Berthold who used to deal with sexual abuse and sexual assault cases on the reservation. White Horne was a driving force behind raising awareness about trafficking and working toward a new law before she died in a vehicle accident in 2013, said Snyder, who continued her work.

The law also requires defendants to pay for any expenses incurred by the victim, such as drug abuse treatment.

"These victims can seek help and they can get help without having to worry about any financial obligations," Snyder said, if the convicted trafficker has resources or such resources were seized.

That has been true in South Dakota, where the U.S. Attorney's Office has prosecuted sex trafficking cases involving several dozen victims. About half of those victims were American Indian women and girls.

In most cases, the victimization did not occur on the reservations, but in Sioux Falls and other larger cities.

"Most often, it is girls and some women who come from the reservation to Sioux Falls," said. U.S. Attorney Brendan Johnson. "When they are here, if they're coming without a lot of resources, they're often targeted by these guys."

Girls, women trapped in the Game

Pimps often aren’t present with the women and girls they control, but their manipulation and threats can keep victims in the life of prostitution unwillingly

Sadie Young Bird, the director of the Ft. Berthold Coalition of Domestic Violence, listens during a breakout session during the 2014 statewide summit on human trafficking put on by North Dakota FUSE at the Bismarck Civic Center in Bismarck, N.D. on Thursday, November 13, 2014. Carrie Snyder / The Forum