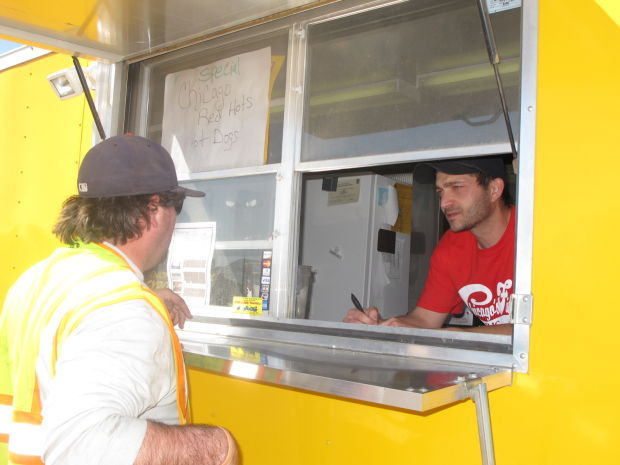 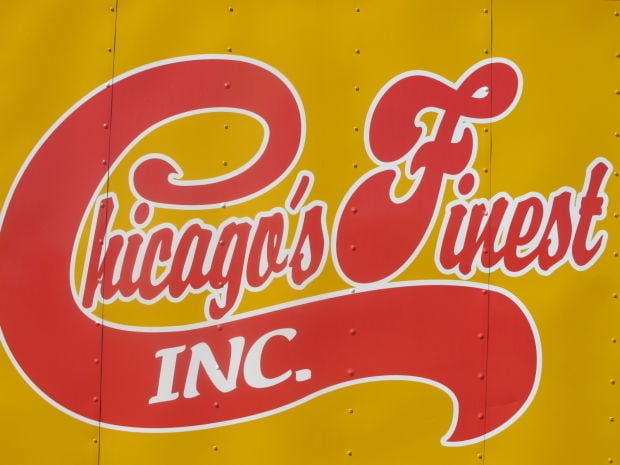 LAUREN DONOVAN/Tribune After pondering dozens of possible names for their food stand venture, a former Chicago police officer and longtime friend decided on "Chicago's Finest" for their hot dog-plus venue in the oil patch. 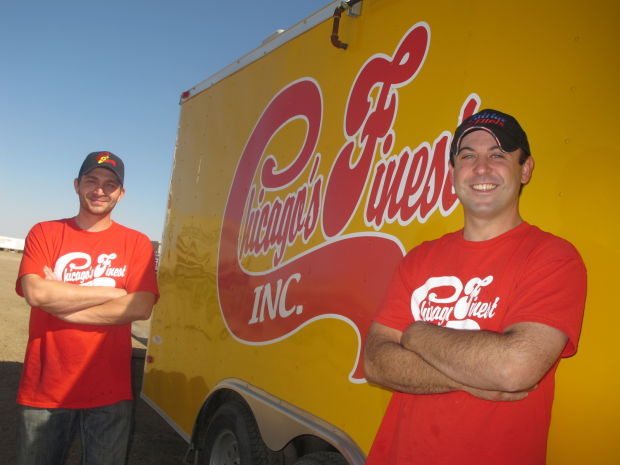 LAUREN DONOVAN/ Tribune  Partners Steve Aramburu (left) and Joe Hackett, formerly of Chicago, are in their second season at this brilliantly painted food stand alongside Highway 85 out in the oil patch near Alexander.

A guy can only be in so many firefights before he figures there's got to be a better way to make a living.

Joe Hackett, 33, was one of Chicago's finest for five years, working a patrol beat in the Windy City's toughest neighborhoods and dodging bullets more times than a guy should have to count.

No one wants to bleed out on some dark street before they've ever really lived, so he got to thinking about his options — one favorite, the idea of being his own boss.

He'd been reading about the Bakken and like so many others, figured he could live his dream of independence and maybe get rich while he was at it.

For inspiration, he looked to the iconic Chicago hot dog vendors he'd grown up knowing, whose grilled hot dogs send an irresistible aroma down the pedestrian-thronged avenues.

He put the concept together, hooked schoolmate Steve Aramburu into the idea and a plan was cooked.

Today, the two men operate "Chicago's Finest," a brilliantly painted red and yellow food stand along one of the busiest stretches of highway in the oil patch.

Chicago-style hot dogs — the bun stuffed with six ingredients, pickles, peppers, the works and a Vienna all-beef dog — top a varied menu. (Hint: Spread a generous pile of napkins on your lap first and hold the thing with both hands.)

So that's a bit of surprise, but the whole gig has been a surprise, they said.

Their location is pretty much ideal, right alongside Highway 85, next to the gigantic Patriot Fuels truck fueling station not far from Alexander. "Those pumps are our biggest ally," Hackett said.

Even so and even with thousands of trucks on the highway and hundreds pulling into the truck fueling stop, they had to build their customer base one adventuresome soul at a time.

"We thought we would get rich quick, but we had to put in the time to build up a base. These guys are skeptical about eating at these kinds of places," Hackett said. He said their food stand was inspected four times last year by the State Health Department, without one problem noted in the reports.

Their food is good and reasonably priced — the dog is $4.50, a gyro $6.25 — so word is getting around among truckers and even townies.

On a good day, they make 100 sales; on slow days, fewer than half that.

"It's a tough market to crack into," Hackett said.

Paul Kramer, a Bakken crude tank driver, stopped in to order a gyro for the road before fueling up. He said he stops in on his haul route from a pipeline uptake east of Watford City to a Trenton rail load out. He makes the 150-mile roundtrip two, sometimes three times in a 12-hour day and Chicago's Finest is a frequent lunch stop.

"I heard about it and thought I'd stop. I like the taste of the gyros," Kramer said.

This is Chicago's Finest's second season along the highway. They left in October and set up in Austin, Texas, "to survive the winter," returning in March to take another crack at the patch.

"We were looking forward to coming back. It's been a long learning curve," he said. "We're really hoping this is our breakout year." That would mean being able to pay themselves a wage, instead of living on savings, hot dogs and investments from family members.

The food stand is open 10 a.m. to midnight seven days a week and it's a fulltime job for both of them. While one's cooking, the other is working on supplies and paperwork.

The food stand is their whole life, but Aramburu, the partner, says it's more rewarding then his old life selling insurance and working as a diesel mechanic.

"It's an honest transaction. People give you money for something they like, not like insurance. And they say, `Thank you.' No one ever says that for insurance," Aramburu said.

Hackett said he lost 40 pounds last year working as hard as he's ever worked in his life, sometimes in 165 degrees inside the metal food stand trailer in last summer's heat.

It's been quite a transition, from Chicago to the barren openness of the oil patch, with the whizzing grinding traffic primarily work trucks driven by people from every state in the country.

He doesn't miss being Chicago's finest in a uniform, but he still views the oil patch with something of a cop's perspective.

"It's amazing for how it exploded, it's pretty well kept in check," he said.

LAUREN DONOVAN/Tribune After pondering dozens of possible names for their food stand venture, a former Chicago police officer and longtime friend decided on "Chicago's Finest" for their hot dog-plus venue in the oil patch.

LAUREN DONOVAN/ Tribune  Partners Steve Aramburu (left) and Joe Hackett, formerly of Chicago, are in their second season at this brilliantly painted food stand alongside Highway 85 out in the oil patch near Alexander.