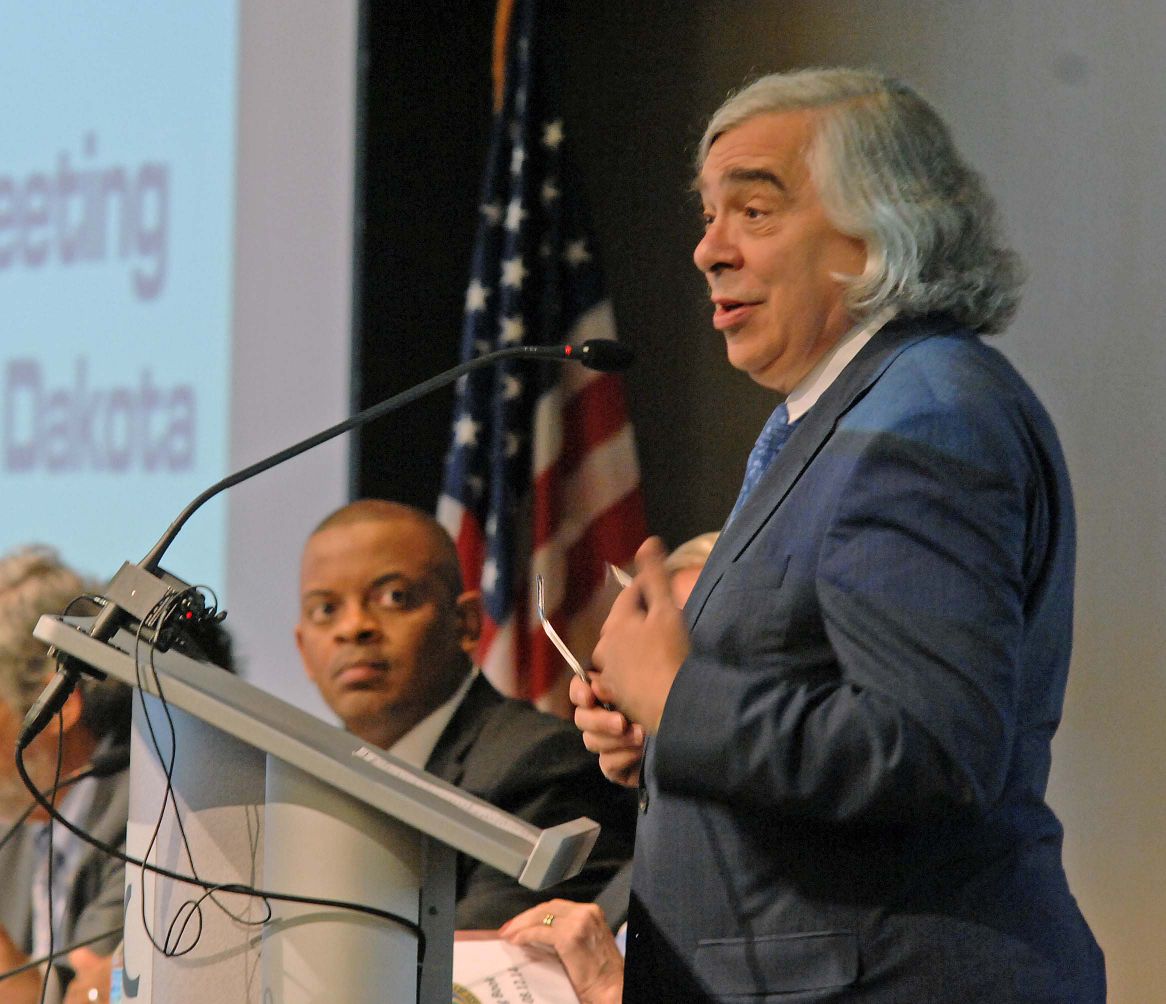 TOM STROMME/Tribune Ernest Moniz, the Secretary of Energy, spoke on energy policy and listened to public stakeholders during the Quadrennial Energy Review meeting in Bismarck on 8-8 afternoon. Listening in back is Anthony Foxx, the Secretary of Transportation who also spoke at the meeting.

BISMARCK, N.D. — The debate over the volatility of Bakken crude resurfaced during a public meeting on energy policy and transportation involving two presidential Cabinet officials and state leaders Friday in Bismarck.

The meeting was one of several scheduled across the country this summer as part of President Barack Obama’s first-ever Quadrennial Energy Review. It is meant to review issues considered to be most critical in developing a national policy for energy infrastructure.

All three members of North Dakota’s congressional delegation and Gov. Jack Dalrymple participated in a discussion.

Dalrymple, who’d signaled his intent to do so earlier this week during a North Dakota Industrial Commission meeting, questioned Foxx and Moniz on the issue of volatility of Bakken crude.

“We are curious why the recent studies released by the federal government have specifically named Bakken crude,” Dalrymple said.

The Industrial Commission received a report this week by Turner, Mason and Company and SGS Laboratories saying that it’s not more volatile.

“We’re seeing some light ends in the Bakken crude that suggest a higher level of volatility than we would see in typical crude. Of course, typical crude is a wide range of different other types of crude,” Foxx said in a press conference following the discussion.

When Dalrymple was asked if he was satisfied with Foxx’s explanation, he sought to defuse the matter.

“I think we need to stop going around in this little circle,” Dalrymple said.

He said that they could probably agree that research shows the overall characteristics of Bakken crude are in the mid-range of light crudes.

Foxx, in his remarks to the audience, said with the volumes of North Dakota oil shipped by rail spiking dramatically in recent years, there is a need for more scrutiny.

“The oil is being transported over long distances. The risk level is higher than we’ve seen in other parts of the country,” Foxx said. “We’ve got to raise our game on safety.”

Moniz agreed that the energy review’s current focus on infrastructure was particularly relevant to North Dakota.

“The story of North Dakota is really quite remarkable,” Moniz said. “The prospects for energy in the United States are very robust.”

“When we develop that energy we need to be able to move it,” Heitkamp said. “We need to build reliable grids.” Sen. John Hoeven,

R-N.D., made the case for a states-first approach to energy oversight, calling states laboratories of democracy.

“Let’s make them the laboratories of energy,” Hoeven said. “Give the states the lead role.”

Belfield resident Linda Weiss was one of several members of the public who was on hand to testify Friday.

Prior to her testimony Weiss said flaring, right of way and safety are concerns of many residents across western North Dakota. She feels that residents and land are taking a back seat in the context of the development.

She said some companies “don’t do their due diligence to plan the best route” for pipelines and pit landowners against each other at times.

Weiss said rail safety has become a major concern as small towns grapple with a lack of training for their emergency responders, which could be a huge issue in the event of a major spill or incident, like recent derailments in Quebec and near Casselton.

“What if something like Casselton or Quebec (happens)? There is no way any of these small towns are prepared,” Weiss said.

State officials estimate a shutdown of the Dakota Access Pipeline could result in Bakken crude losing value and cause some in the oil industry to flee North Dakota.

The operator of the Dakota Access Pipeline estimates it will take three months to empty the pipe of oil and take steps to preserve it for future use.

North Dakota regulators on Wednesday decided not to impose any production cuts on the oil industry amid the coronavirus pandemic.

State officials on Tuesday reported a saltwater spill at a well site in in McKenzie County.

State environmental officials on Thursday reported a spill of emulsion -- a mix of oil, saltwater and natural gas -- at a well site 3 miles we…

A trucking company accused of illegal dumping in the North Dakota oil patch could be facing up to $2 million in fines, according to an adminis…

Work is slated to begin July 16 to plug the first of North Dakota’s abandoned oilfield wells under a new program approved by regulators.

TOM STROMME/Tribune Ernest Moniz, the Secretary of Energy, spoke on energy policy and listened to public stakeholders during the Quadrennial Energy Review meeting in Bismarck on 8-8 afternoon. Listening in back is Anthony Foxx, the Secretary of Transportation who also spoke at the meeting.