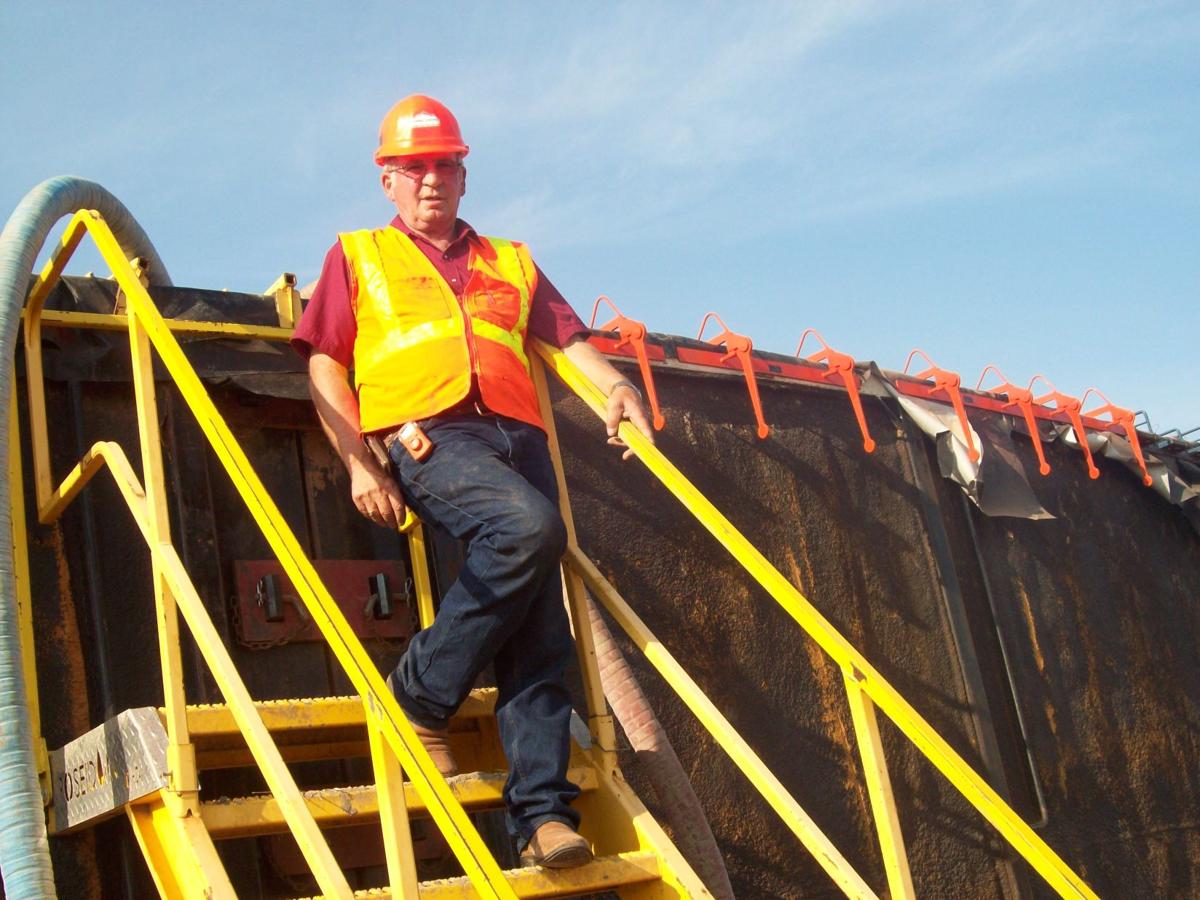 Seymour Volk of Elgin demonstrates the use of the Safety Clamp he invented for securing frack tank liners. 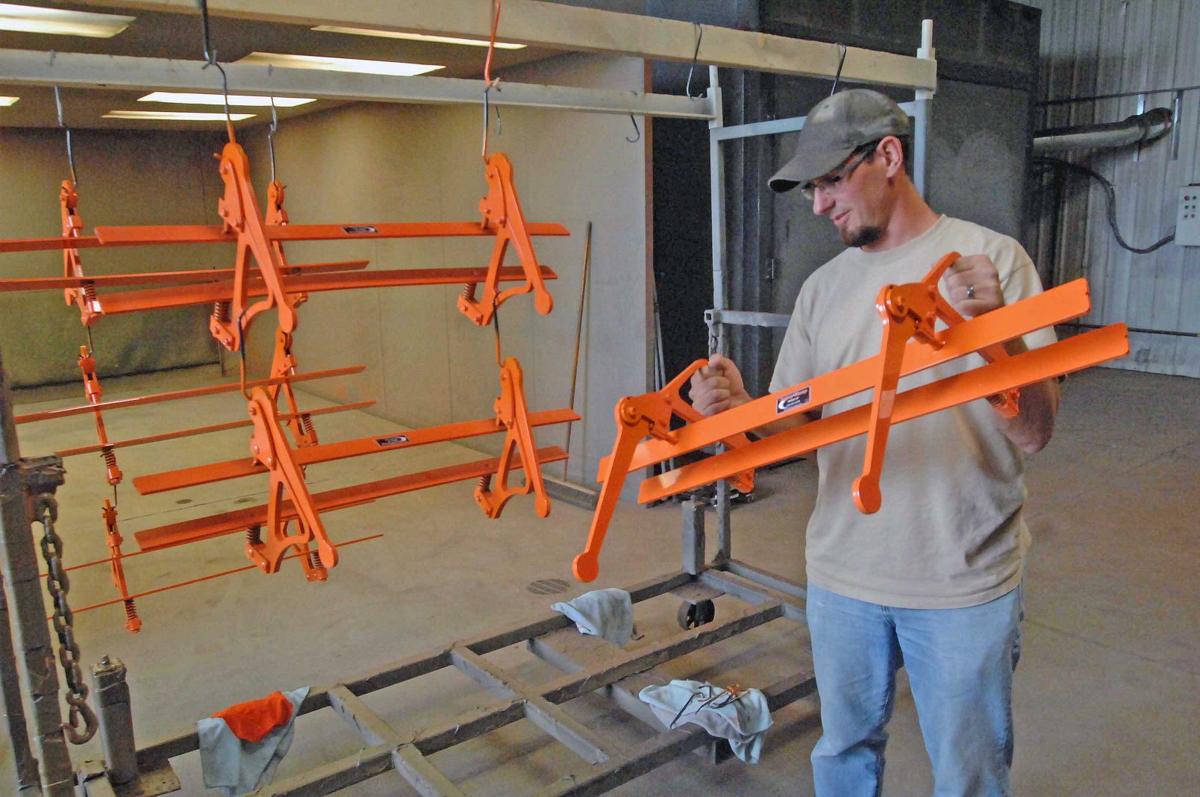 Eric Schwingler holds a completed Safety Clamp invented by Seymour Volk, of Elgin, as a solution to secure liners to frack tanks in the oilfield. 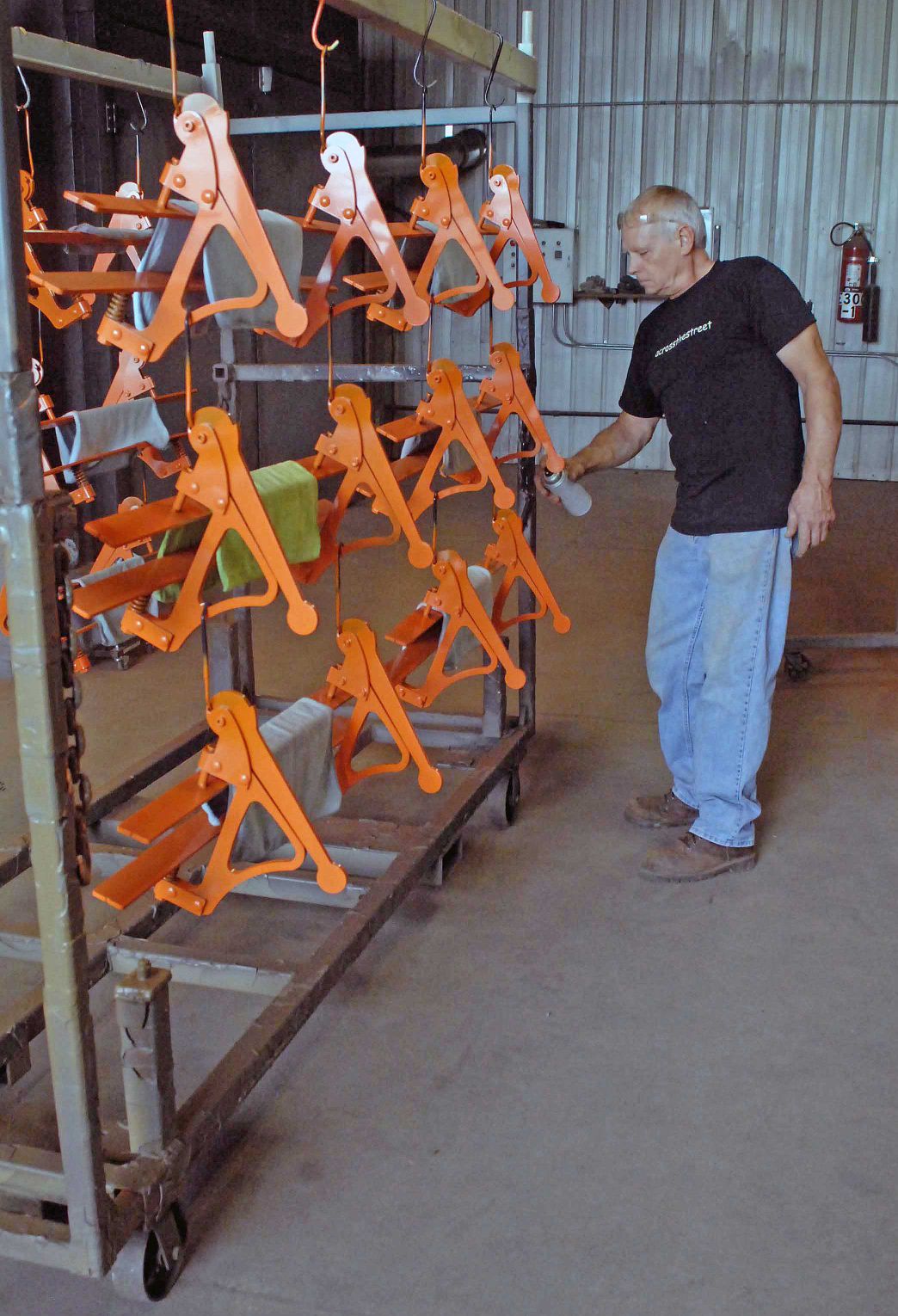 Roy Fuchs spot paints the Safety Clamps on a drying rack in a work room at American Machine. Safety Clamp will produce 1,500 to 2,000 clamps per week to meet demand.

He may not have graduated from eighth grade, but Elgin native Seymour Volk has several patents to his name. He’s hoping to turn his most recent invention into a viable oil field business.

Volk is the inventor of the Safety Clamp, a clamp designed to hold the liners of fracking fluid tanks and water corrals in place.

“They’ve been using C-clamps,” Volk said, of tank companies operating in the Bakken.

Volk came up with the idea for his invention while working in western North Dakota’s oil fields, he said.

Though his clamps cost more — about $80 apiece — Volk said, they are designed to last about 20 years compared to the six months a C-clamp usually lasts. According to the Safety Clamp website, the clamps will outlast the tanks they are used on.

“This is the kind of thing we like to see North Dakotans do,” said Ron Ness, president of the North Dakota Petroleum Council.

Monte Bester of fracn8r, an independent fracking consultant, said the product could be useful if it helps prevent tearing of frack tank liners. He said if the liners have areas where they are tight, they can rip from the weight of the water.

And as multi-well pad drilling spreads, he said, the frack tanks are becoming more widely used and are staying put longer. The long life of the clamp helps with corrosion and allows it to be used multiple times on multiple tanks.

Another benefit of Safety Clamp is that it is spring-loaded. Volk said that makes it quicker to install — 2 to 4 seconds instead of 5 minutes — and it won’t seize up and not open like a C-clamp will.

The Safety Clamp also does not require tools to install, another time-saver.

Volk said he made his first sales a couple of weeks ago. He said the product was held up for a while in the design process, but it is starting to gain recognition now. A patent is pending on the clamp.

Last Monday, about 2,000 Safety Clamps were painted at American Manufacturing in Bismarck. Volk’s other inventions are manufactured in South Dakota.

Volk also has patents on live animal traps and a cattle squeeze chute he designed. Volk, who grew up in Raleigh, got the idea for the squeeze chute after working on a dairy farm when he was younger. Many of his ideas have come from his life experiences.

Volk said he wants to keep the manufacturing of his Safety Clamps local. The clamps are assembled at his shop in Elgin and at shops of family members in the area. He said by keeping it local, it could become a beneficial business to the community.

Volk said he plans to manufacture between 1,500 and 2,000 clamps per week. He has a couple thousand already in his inventory.

It takes about 120 clamps to secure a liner on a small frack tank, he said. The larger tanks take about 380 clamps.

“The market on them is unreal,” he said.

Volk has made trips to Oklahoma and Texas touting his product. He said there also has been interest in his product from companies in nine other countries, but he is not sure whether he will be able to get into the foreign market or not.

Seymour Volk of Elgin demonstrates the use of the Safety Clamp he invented for securing frack tank liners.

Eric Schwingler holds a completed Safety Clamp invented by Seymour Volk, of Elgin, as a solution to secure liners to frack tanks in the oilfield.

Roy Fuchs spot paints the Safety Clamps on a drying rack in a work room at American Machine. Safety Clamp will produce 1,500 to 2,000 clamps per week to meet demand.