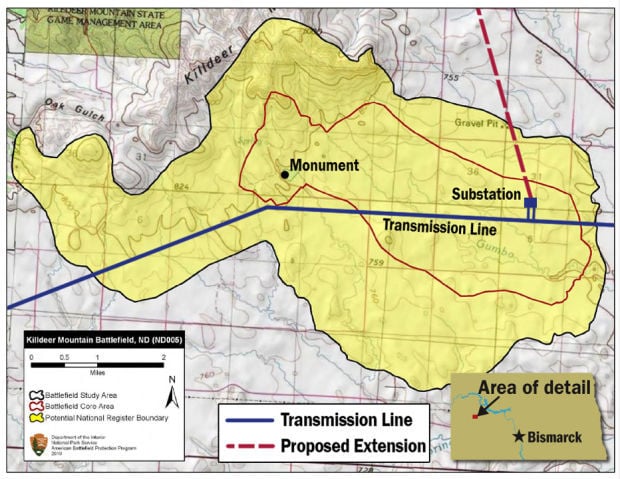 This map represents a proposed transmission line and substation (in blue) that Basin Electric Power Cooperative plans to build through the Killdeer Mountain Battlefield site that will be studied in a National Park Service American Battlefield Protection Program. The map also shows an extension (in pink) that Basin says it may also build to add stability to the Bakken oil patch power supply. 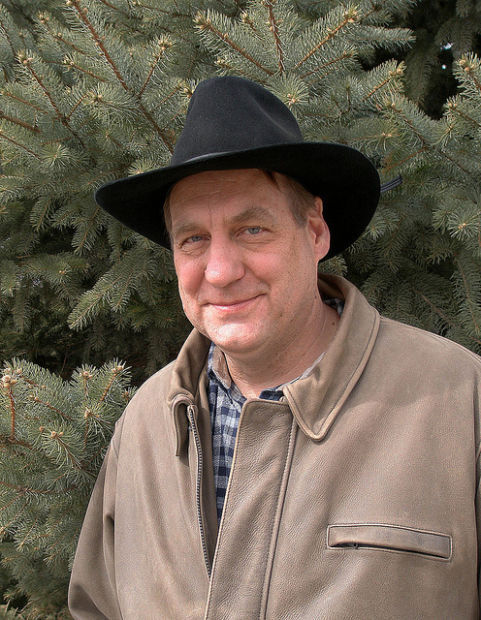 BISMARCK, N.D. — The fight to preserve the Killdeer Mountain historic battlefield from oil development will move to another front, this time where a power company plans to build transmission lines and a substation in the heart of where the battle was fought.

Basin Electric Power Cooperative plans to build a new major line from its Antelope Valley Stations near Beulah west and north into the Bakken to help fill a huge appetite for electricity in the oil patch.

The transmission line route and a new substation would be located where the U.S. Army, led by Brig. Gen. Alfred Sully, and several bands of Sioux engaged in 1864.

It is an area just selected by the National Park Service for its American Battlefield Protection Program. The two-year study will be led by Tom Isern, history professor at North Dakota State University, who signed the contract days ago.

The Public Service Commission will hold a hearing at 10:30 a.m. Wednesday at the Killdeer City Hall to decide whether to put the transmission project on a fast track. Basin is asking the PSC to waive certain procedures and timelines and approve the 200-mile route for spring construction.

Basin's project coordinator, Curt Pearson, said Basin has only known about the NPS study since Tuesday.

Pearson said Basin hired a contract archaeologist to inventory the area as part of its application and environmental process.

"No significant cultural sites were identified that would be impacted by this transmission line project," Pearson said. "Because this NPS study is a new development that came about after the required inventories and reports were completed and submitted to the review agencies, we have not had time to fully analyze the significance of this situation."

He said Basin hopes to come to a reasonable conclusion "as we work through this issue."

Isern said the study will look at battlefield history and archaeology and identify threats to its integrity. Some of the integrity involves aesthetics, he said.

"If they were going to situate a power line to provide maximum disruption to the sightline of this battlefield, this plan will do it," he said.

Rob Sand, who lives near the historic battlefield, is a member of the Killdeer Mountain Alliance. The alliance was formed to give a voice to the mountains and battlefield when Hess Corp. filed for permits to set an eight-well drilling pad near the battlefield early this year.

"It's one thing after another. It is alarming. We've loved it and taken it for granted," Sand said.

He said Isern's study coupled with a recent tour of significant sites in the oil patch by Gov. Jack Dalrymple, as a member of the state Industrial Commission that approves drilling permits, should give pause to Basin's plans.

"The Industrial Commission is at least pretending to be interested in protecting special places and with Isern's study, those two things say they should hold off and don't be putting something like that out there," Sand said. "If they're starting to consider special places, the state needs to support that."

Even as Basin goes through the formal process to build the new 345-kV line from its coal plant to the oil patch, it has filed notice that it wants to build a second line, using the alternate route studied for the one going through the PSC hearings next week.

The second line would kick off the new substation and be routed north through the battlefield zone toward the oil patch.

Basin spokesman Daryl Hill said the second line would provide more power to the oil patch region and build in some redundancy in case of a major outage.

"As power load studies have progressed, there's good cause for using that alternate as well," Hill said.

Isern said the study will document "what went down and where" during the battle, which he said is the largest Army and Plains Indian engagement to ever take place in the Great Plains.

"It was way bigger than (Custer's) Battle of the Little Bighorn. Sully came out with his mid-century modern warfare, formed a square and he had all he could handle. Eventually, he turned his howitzers on the women and children on the slopes," Isern said.

The NDSU study will look at the historical significance of five known battlefields in North Dakota, including Killdeer Mountain, for possible inclusion in the National Register of Historic Places.

Hill said Basin has filed notice for a supplemental environmental impact statement for the second line.

The environmental clearance is required for both projects because the cooperative will use federal financing under the USDA Rural Utilities Service.

The EPA has fined the operator of two tank batteries in northwestern North Dakota $50,000 for inadequate spill prevention and control measures at the oil patch facilities.

This map represents a proposed transmission line and substation (in blue) that Basin Electric Power Cooperative plans to build through the Killdeer Mountain Battlefield site that will be studied in a National Park Service American Battlefield Protection Program. The map also shows an extension (in pink) that Basin says it may also build to add stability to the Bakken oil patch power supply.